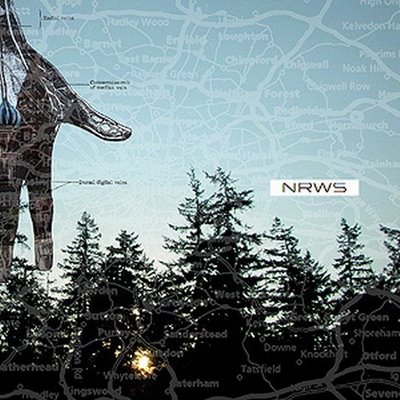 I’ll admit right off the bat that this might not be the most unbiased review. As a massive fan of the heavy monstrosity that was Botch, any CD with a sticker that says for fan of Botch or any band featuring ex-members of Botch will find its way into my rotation almost immediately. Same goes for the debut full-length from the hardcore supergroup, Narrows. Featuring members from Botch, Unbroken, These Arms Are Snakes (just a few of the bands) New Distances is a distortion-laden trek through the wilderness of guttural screams and pounding double bass.

“Chambered” leads off this trek, wildly screeching and swinging guitars very reminiscent of Botch, before Dave Verellen’s guttural yell pushes the song into a sludge-drenched interpretation of punk rock. After the longest two minutes of your life, “Chambered” is finally over. With half the tracks clocking in at a shade over three minutes long or less, Narrows definitely makes it feel like New Distances is longer than it really is. Unlike most sludge influence sounds that plod along with the speed of a broken steamroller, Narrows tends to bear that punk rock banner that burns and fights its way to the edge of the cliff in a blink of an eye. “Sea Witch” carries that torch, throwing in more of the Botch influences, although not as obviously this time around. The dueling guitars, each wallowing on a different uncomfortable level of distortion, makes Narrows a hard listen at points, but in a good way. This is in no way catchy music whatsoever.

“The Fourragere” plants the punk rock flag firmly at your feet and braces you for a six minute opus of sludge and metal influence rock. It would almost feel out of place, but Narrows does a great job of hinting at what is possibly at stake when New Distances goes for a spin. Some of the songs on New Distances may be a bit disjointed, but this supergroup has done a great job of finding its own sound, offering up one of the finer debuts of this year.