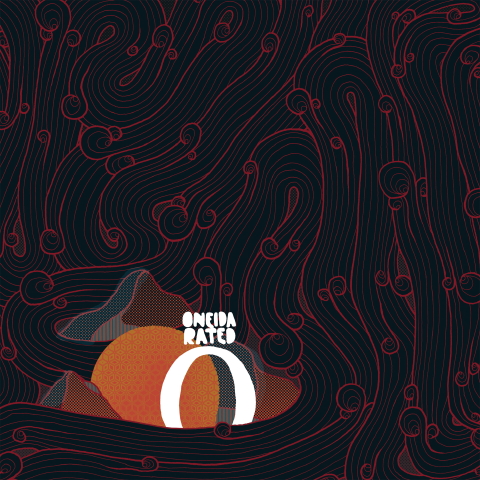 There are certain artists throughout history that insist their art extends forth into the world from another dimension of consciousness lurking just below surface level awareness. To create, all they need to do shut off their regular thought patterns and dip into this infinite wellspring; they funnel a source of unlimited energy into the mold of their chosen medium.

Whereas Oneida have never put out a bad album by any stretch of the imagination, I was slightly less than excited about the direction they were heading on their previous two discs (2005’s The Wedding and 2006’s Happy New Year), leading up to the extended magna opus of releases that they’re calling the “Thank Your Parents” series, which started with last year’s brilliant Preteen Weaponry.

With the release of Rated O, a 3-disc megalith of trance-inducing mindfuckery, it seems obvious that even Oneida realized where they were going wrong: too much focus on their weaknesses and not enough on their strengths. They were overthinking things by trying to hone their songwriting chops, which doesn’t make a lot of sense when you’re a fantastic instrumental band. This shit should be effortless.

And that’s the beauty of Rated O. I can’t think of any other triple albums that I’d really recommend, but nearly all of this rules. It’s like Oneida’s music now exists outside of time, and all you have do is tune into to channel O cosmically, and it’s there waiting for you, jamming away into eternity.

Disc one starts off with a more electronic approach than the band has ever attempted, and the blissed out, dub/trance experimentation almost always works. It’s an obvious creative direction for an act with such a talented keyboardist. Disc two kind of reminds me of the Oneida of yore on a classic album like Anthem of the Moon, but with less emphasis on vocal dynamics. They round out the trilogy with three tracks of slowed down, protracted droning psych goodness on disc three.

When you throw it into iTunes, the three discs are just lumped together in sequence, which they should be. Having built a new studio in Brooklyn and gone on to head their own label (Brah), I imagine these guys could drop another monster freakout like this by say, next week. If so, I for one, will be at the front of the line, feverishly jonesing to “tune in”.