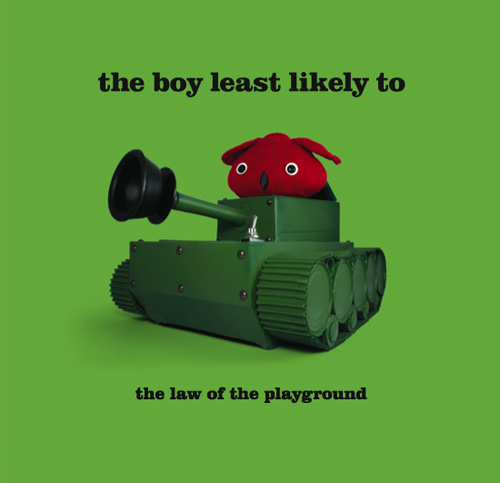 Do you enjoy tea parties and cucumber sandwiches? Do you make regular visits to your grandmother, or in other cases, your local senior citizens’ home? Does your wardrobe consist of mostly sweaters, slacks, and loafers (vintage, of course)? If so, you probably already know about the new album from the UK indie-pop group The Boy Least Likely To. You have its release date circled on your “kitties and flowers” calendar, and you’re going to buy it and love it. This review is just a formality; your decision has already been made.

For the rest of us, what The Law of the Playground offers us is another large helping of glistening, strum-along pop music with incredibly cute and positive imagery such as: putting pencils up your nose, big balloons in the sky, and making lemonade on a hot summer’s day. The album is nothing if not consistent.

The comparisons to other indie-poppers like Belle & Sebastian are unavoidable, and with a musical style so delicately composed and produced, such comparisons are more than valid. But while Belle & Sebastian sounds like a 16 year-old trying to behave like 28 year-old, The Boy Least Likely To sound like 30-year-olds regressing to back to 12 year-olds. The songs on The Law of the Playground are much more direct and full of whimsy than those from their first album. Many songs on the first album captured the vulnerability that comes with irony, with songs like “Be Gentle With Me” and “Monsters” having a dark edge that gives depth to their childish imagery. The Playground offers no such insight, it feels as if most the songs truly are the playground sing-alongs they purport to be.

Only towards the end of the album does the high from being 5 years old come tumbling down. “A Fairytale Ending” is the standout song, a bouncing twee-anthem full of innocence yet tinged with the forlorn reminiscence and timid regret the first album was so adept at conveying.

If nostalgia and whimsy are simply an escape from the harsh realities of growing older, then The Boy Least Likely To are further down the rabbit hole than most people ever will get. And while the first album was great because of its subtle foundations in real world fear and heartbreak, The Law of the Playground is firmly entrenched in Wonderland.