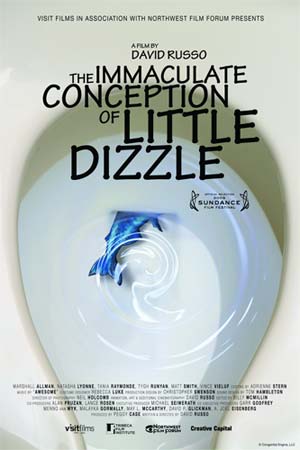 About a year ago, I was working for a start-up in an old building in Seattle’s SoDo District. It was complete with rickity floorboards and unusual decorations crafted from salvaged parts. The overwhelming scent could’ve been described as “dusty.” The upstairs housed uniquely-decorated office spaces, and the downstairs had a large, spacious room with no functional use. It was being fitted to house a club and a bar (and has since been successfully deemed Club Motor).

Imagine our curiosity and surprise, then, when it was announced to us that a film crew would be shooting a feature-length movie in our building. We had no idea what to expect, but peering into a set revealed a strange-looking set with a lot of toilet seats and a pyramid of toilets stacked almost entirely to the ceiling. What kind of film could this possibly be?!! The film crew soon revealed that the film would be something like a surreal comedy, and that it was titled, “The Immaculate Conception Of Little Dizzle.” I wrote down the name of the film, but had completely forgotten about it until this year, when I attended a press screening of it, completely randomly. The connection didn’t dawn on me until more than halfway through the film, when the toilet pyramid appeared and I was able to put two and two together. It was a miraculous moment.

Well, if surrealism, toilet pyramids, and a playful title aren’t enough to spark your interest, “Little Dizzle” may not be your ideal kind of film. Nonetheless, let me expound.

“Little Dizzle” is a comedic tale about the adventures of four after-hours office building janitors who unknowingly become the test subjects for a self-heating cookie, that warms itself when being consumed. The characters are easily lovable, and include an individual blindingly confused about his religious faith, an artist temporarily working as a janitor, an extremely impulsive couple, and a cross-dressing employer. Much to their dismay, the trial cookies have unanticipated and otherworldly side-effects that slowly emerge. While the film starts off fairly normal, as a straight-forward comedy with clever dialogue, it soon plunges into a surreal adventure. And here, the forte of director David Russo truly shines, in his ability to set a playful mood from the very beginning that makes the sudden shift into the implausible to be surprising, but not at all disconnected.

“Little Dizzle” is a clever film which culminates into a comedy unlike any I have ever seen, which is a remarkable in this day and age. Despite the aforementioned prevalence of toilets, this film’s brand of toilet humor is intelligent, and it allows the film to stand out as a gem in the budding local film industry.