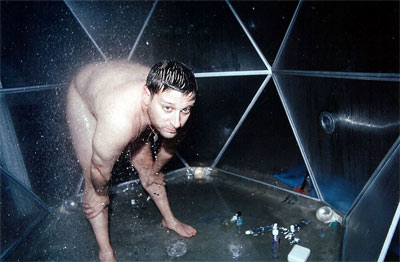 An artist’s dream is that work he/she leaves behind will outlast their lifetime — that he/she will make a permanent mark on the annals of human history. Ultimately, the result is much more important than the person behind it, but in many cases, the artist becomes larger than the art itself, obscuring their legacy and leaving them forgotten, lost in a wind of ego and fame.

Ondi Timoner’s documentary, We Live In Public, is, ostensibly, about Josh Harris, the tragic and misunderstood dot-com multi-millionaire with an uncanny eye for the future. His ideas about technology, the flow of information, and the basic human need for exposure made him millions of dollars at the dawn of the World Wide Web. But his underlying psychosis, his fame-whorish attitude, and his penchant for throwing millions of dollars at his eccentric “artistic projects” led to his bankruptcy at the end of the ‘90s.

His largest and most successful artistic endeavor was the titular project – Quiet: We Live In Public, in which more than 100 of New York’s bohemia were picked to live in a bunker-style capsule hotel where the rights of privacy did not exist. Josh Harris plays the deity figure, providing everything: free food, bathing areas, a church, uniforms, and much more. At first, the people involved are excited to be there, living in an artist’s utopia and relishing the ability to enter into their neighbors’ private worlds with the touch of a remote. But as things go on, as Mr. Harris starts to add grueling psychological torture to the experiment, and as the inhabitants fight for every shred of dignity and privacy they believe they deserve, things break down quickly and the commune is ultimately dissolved by the police.

Ms. Timoner experienced this astounding experiment firsthand as a resident of Quiet, and was right to document what ended up being one of the most eerily foreshadowing ideas ever crafted during the dotcom era. With the rise of reality television and the advent of YouTube, we all live in an extended version of Quiet, only now the relinquishing of our privacy is not forced upon us, but rather, we readily give it away in exchange for so-called fame (granted, the destruction of Quiet may have been more of a result from Mr. Harris’s fascist tactics and torture than anything having to do with round-the-clock exposure).

And that is where the message is somewhat muddled. Josh Harris’ own eccentricities are his own undoing, and the movie makes great effort to point that out. It is his boredom with his own creations that causes him to sabotage his projects, sometimes deliberately. After the end of Quiet, Mr. Harris’ next endeavor was the first proto-YouTube channel, in which he and his girlfriend lived together in an apartment televised 24/7. No fascist overtones, no space church — just living happily and being broadcasted over the internet with a chatroom for interactions. Rather than being revelatory, though, this project ends up being a depressing window into a man who is transparent in most of his actions… a man who has great ideas on paper, but cannot overcome his own shortcomings to actually execute anything worthwhile.