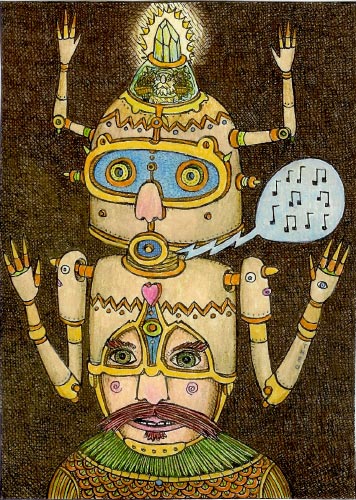 “I feel like more people are discovering [comic books] and realizing that it’s a medium where you can pretty much do anything. There’s no limit.”

While print magazines are folding and newspapers are going bankrupt, Portland-based artist Theo Ellsworth has a dream that might sound slightly silly in this technological age. Nonetheless, one can’t help but respect the man’s dream and drive to revive the art of comic books… one book at a time. As an illustrator with DIY roots in zines, Ellsworth started off his artistic career humbly, by way of hand-stapling photocopied comics and selling them at zine fairs. Since then, he has gotten a publishing deal through independent publisher Secret Acres and pumped out two beautifully-crafted books. His first book, Capacity, was a monster at over 100 pages and featured a wide array of shorter comic strips. Its dream-like, whimsical sequences received a great deal of critical praise and allowed for Ellsworth to publish a second book, Sleeper Car.

Sleeper Car is a great example of the lighthearted fantasy themes that are inherent in his works. At only 32 pages long, it contains what Ellsworth describes as, “mostly just silly, off-the-cusp kind of stuff I thought of while riding my bike or something.”

And for the most part, Ellsworth works in just such a fashion. He conjures up ideas while getting from place A to place B and then visually spews out his thoughts onto paper, often without an idea of what the end goal even are. “Most of my stories have been shorter, so I’ll just kind of play it out in my head a number of times and think of it from different angles,” explains Ellsworth. “[Then] I usually just sit down and draw; I’ve rarely written it out beforehand. Even the bigger scenes in Capacity I’d sort of made up as I went and hoped they would all come together somehow.”

“[It’s] going to be an all-out fantasy story and not auto-biographical. In a lot of ways, it feels even more personal. It’s sort of the culmination of all these characters that I’ve been developing for years, so I’ve kind of been challenging to go to a point where I feel like I can tell that story.”

— Theo Ellsworth, on his next book

And it all did, with Capacity being a book that, although not necessarily homogeneous, feels appropriately diverse. For the new book, however, Ellsworth finds himself having to change his methodology simply because of the enormous scope of the project. It will feature characters he has been developing since he was a wee lad, and as a result, all of the characters he wishes to write about have backstories that have grown quite hefty through the years. The challenge, then, is putting all of their stories into concise boxes and then deciding how to sequence them — which are struggles similar to those one would face when writing a novel or a screenplay.

“I’m going to have some kind of chart where I keep track of all the characters and where they are and where they need to go so they don’t get totally lost,” explains Ellsworth about his revitalized process for the new book. “It’s going to follow a number of different characters in how they come together, and it is going to be short sequences that lead together to form a bigger whole.”

Contrasting greatly with the short, playful Sleeper Car, Ellsworth’s next book will be a much more serious effort.

“[It’s] going to be an all-out fantasy story and not auto-biographical. In a lot of ways, it feels even more personal. It’s sort of the culmination of all these characters that I’ve been developing for years, so I’ve kind of been challenging to go to a point where I feel like I can tell that story,” reveals Ellsworth. It won’t be the first time Ellsworth has attempted to tell the story, but it will be the first time where he feels like he has the necessary skills to tell the story properly. In fact, that is the prime reason Capacity evolved into what it is to begin with. “I tried starting [the new book] a number of times, and it never really worked. And that’s why I started doing the Capacity stories. That whole book was me sort of trying to get a handle on the medium — to just start drawing things I think about and daydreams and things inspired by actual dreams I’ve had,” explains Ellsworth. “From the moment I finished that big book, I’ve just been writing away, building things, trying to work away on the next big story.”

Creating a large comic book is not an easy feat; Capacity took Ellsworth five years of intermittent work to complete. In between, he balanced his time between the teaching art workshops, creating occasional commission pieces, and showing his work at Portland’s famous Saturday Market — an outdoor market where artisans, craftspeople, and vendors of all kinds sell their wares.

“I feel like I’ll have really made it as an artist when I can stop [selling at Saturday Market] and can focus on making my stories. It’s been good; it’s gotten me by for the past three years, since I moved to Portland… but I don’t know,” says Ellsworth. “I like selling at like comic conventions where people already get it… [but] the cool thing about doing it at the market is that I end up selling my stuff to people who would never go to a comic show or go into a gallery or ever be exposed to that. So that’s really amazing because you get a bigger cross-section of people.”

Similar to showing at the Saturday Market, Ellsworth takes on commissions, but only on rare occasions. Commissions are guaranteed paychecks, certainly, but they are also huge time sappers. Nonetheless, while he continues to do side projects to help make ends meet as a full-time artist, they are ultimately just steps towards his goal of being a full-time comic book artist. It’s a goal that’s hard enough to reach when you’re creating comic books for mass consumption, but it’s even harder when your subject matter is slightly off-the-wall, as in Ellsworth’s case. Luckily, he has found a solid friend in Secret Acres, and their relationship is one that sprung up perfectly at the right place and the right time. “Secret Acres actually contacted me because they found my book at a comic shop in New York. They didn’t actually exist yet!” says Ellsworth. “It was actually kind of funny; I’d sent my stuff to some publishers and either had gotten no response or rejection letters, so for the most part, I didn’t really feel like working with existing publishers… I always told myself that the right publisher didn’t exist yet, and it was true. Capacity was their first book, and they just came out with their fourth. They’ve been great.”

With artistic talent, a supportive publisher, a head full of ideas, and a third book in the works, Ellsworth still has his eyes on the prize and has great hopes for the future of comic books.

“I feel like more people are discovering [comic books] and realizing that it’s a medium where you can pretty much do anything,” says Ellsworth. “There’s no limit. It’s an interesting time for artists to realize that they can sell comics in their own style, and that it doesn’t have anything to do with the pre-existing formulas.”