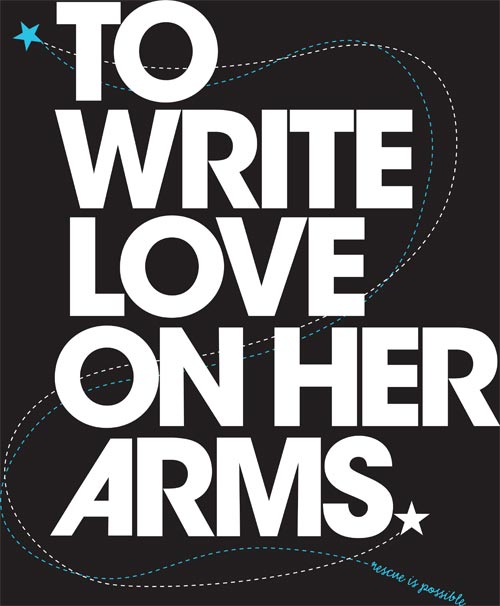 To Write Love On Her Arms (TWLOHA) Non-Profit Charity Interview

To Write Love On Her Arms (TWLOHA) is a non-profit organization that talks to and raises money for young adults suffering from depression, thoughts of suicide, and self-injury.

Renee Yohe is 19 years old. When friend Jamie Tworkowski finds her, a lethal mix of cocaine, pot, pills and alcohol is coursing through her veins. Unable to receive professional help, her friends try to save her from herself. Yohe’s story would eventually become the basis for Tworkowski’s non-profit organization, To Write Love on Her Arms (TWLOHA). The organization talks to and raises money for young adults suffering from depression, thoughts of suicide, and self-injury. On this particular night, though, Tworkowski is merely a new acquaintance of Yohe’s. When he and others attempt to admit her into a rehabilitation center, they are turned away; Yohe must be sober to be admitted. She and her friends must wait five days for her to sober up before trying again. Those five days become symbolic of her rebirth; they are a new world away from the drugs, self-mutilation and sexual abuse that had haunted her for so long.

“I hadn’t been around a situation like that before, in terms of addiction,” Tworkowski, 27, explains. “I was just really worried about her. She seemed really trapped and really hurt. I wanted her to be okay.”

Tworkowski’s compassion for Yohe has transformed into To Write Love on Her Arms. Created soon after his experience with Yohe in 2006, the Orlando, Florida-based organization began its slow process of reaching out, armed only with a MySpace account and a few t-shirts.

The organization’s modest beginnings, however, soon caught the attention of Tworkowski’s friends — alternative bands, Switchfoot, Anberlin, and Between the Trees. Between the Trees’ vocalist Ryan Kirkland also happened to be close to Yohe.

“I was friends with her prior to when everything went down,” says Kirkland. “I feel like I was the only person who knew what was going on with her.” Soon, other alternative bands like Paramore and Hawthorne Heights started wearing shirts sporting the organization’s name — and fans took notice. “I soon realized [To Write Love On Her Arms] could be bigger than just helping [Yohe],” Tworkowski recalls. “People were starting to ask questions and get excited.”

TWLOHA’s success, unfortunately, remains a direct result of the vast number of people who battle depression, suicide and self-injury. One college junior, residing in New York, gave this disturbing account of how she feels when she cuts herself: “I love the feel of cold metal to my skin, the pause before the blood starts to bead up, and then the stinging sensation as a sea of red overtakes your skin.”

She is not alone in the thrill she gets from cutting herself. According to www.twloha.com, four percent of Americans suffer from self-injury, which not only includes cutting, but burning, bruising and scratching, as well.

When asked if she has entertained committing suicide, the anonymous college junior replies, “I have, often. I like to sit and think of interesting ways to kill myself — like slitting my wrists and taking out the tendons in my ankles, so I can’t stand and slowly drown in my own blood.” Regardless of her graphic suicide fantasies and her experiences with self-cutting, she denies being clinically depressed.

On the other end of the spectrum, a clinically depressed junior at Iona College, who does not entertain suicide or self-injury, explains how he feels when depression gets the best of him. “[I feel like] I’m worthless. People don’t like me. I’m never going to be able to make it in the real world. I am never going to get a girl to like me. I’m a loser.”

Even though his bouts with depression are fairly rare, thanks to the anti-depressant Zoloft, he joins the other 18 million Americans who suffer with this disease, according to The National Institute of Mental Health. Approximately two-thirds of these people never seek help. Depression, as expected, can also lead to suicide, particularly in teenagers. In fact, suicide is the third leading cause of death among 18-24 year olds, according to the National Adolescent Health Information Center.

Tworskowski recalls a particularly impacting story of how his organization has, in fact, saved lives from suicide. “There was one girl who was thinking about taking her life,” he explains. “She ran into a friend, and the friend had one of our t-shirts on. She asked her friend, ‘What is that? What does it mean?’ They started to talk about it, and as a result of that conversation, she chose to stay alive. That’s one story that really stayed with me.”

Aside from letting their t-shirts talk for them, TWLOHA has hired six full-time employees and eight full-time interns to answer their MySpace messages and e-mails. In total, TWLOHA has answered over 80,000 messages from 40 different countries. The organization also donates 25% of its revenue to treatment; in 2007 alone, $100,000 was donated to the National Hopeline Network, Teen Challenge, S.A.F.E. (Self Abuse Finally Ends) and Kids Help.

“She reads from her book, talks to some kids, and sometimes at the end, opens it up to a Q&A,” explains Kirkland about Yohe’s time on stage. After Yohe promotes her book and talks about her experiences, Between the Trees take the stage, bringing with them two songs written especially for Yohe, “The Way She Feels” and “A Time for Yohe.”

While Yohe and Between the Trees make their way around the U.S., Tworkowski will also be on his own tour, “An Evening with To Write Love on Her Arms.” “More than anything, we talk about community and that people need other people,” Tworkowski says. “They’re not alone, and their story matters.”