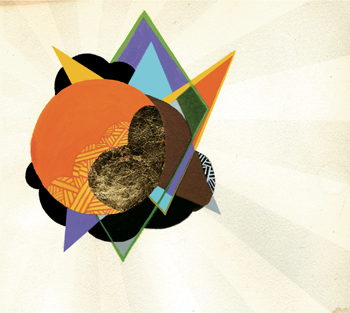 Scott Pinkmountain (formerly Scott Rosenberg) apparently used to be a somewhat hot-shit Bay Area avant-garde composer/free jazz saxophonist, but then decided that by immersing himself in that music, he’d forgotten the importance of good songwriting. And so this transformation from free-form composer into burgeoning songwriter necessitated a name change or something like that. Unfortunately, that’s kind of what this disc sounds like: the creation of a guy who’s spent his entire life studying abstract music theory but failing to wrap his head around things like simple chord progressions and hooks. But ultimately, it’s his voice that ruins things here.

The album follows the story arc of a relationship gone bad, and when the relationship goes bad, so does the album, in my personal opinion. He actually paints a fairly interesting lyrical picture, but by song six, “Abyssinia,” his increasingly mopey and off-key indie rock warble starts to annoy the living crap out of me. In fact, upon about my sixth listen, I swore to never put this on EVER again; mainly because his “singing” has the exact same effect on me as something like fingernails on a chalkboard. It quite literally makes me physically uncomfortable.

Which is too bad really, because on a lot of this disc he’s got this “play-every-instrument-known-to-man-at-the-same-time” thing going on which totally works. If this were an instrumental record, this would probably be an A review. But unfortunately, it’s not.

I’m not familiar with this artist, but just saying that his voice annoys the crap out of you isn’t really helping me learn more. if he can’t sing and he’s trying to be a good singer, that’s relevant, but there are tons of cool artists who sing for shit but who still do cool stuff. in fact a bunch of my favorites are in that category. I personally don’t mind an annoying voice if it’s justified by other things, and I might even go so far as to say that typically good voices often turn me off.

wish you would have dealt more with what the record’s trying to do, rather than just talking about how it made you feel. that way, if good singing is crucial to that, the fact that you hate his voice would have given you the go ahead to really drop the hammer.

I see what you’re saying, but when I literally can’t even listen to an album because the guys vocals are so bad, and he’s trying to write songs, that’s kind of a big deal. I suppose you missed that. These are supposed to be songs. Vocal melodies are pretty important to songs.