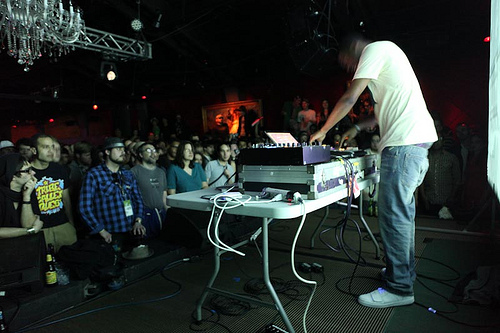 This SxSW, FIVE REDEFINE staff members were on hand, rendering it the biggest SxSW for REDEFINE yet. And because three of us definitely attended many a show together, my top five list definitely shares some commonalities with Tim Vordtriede’s. Nonetheless, different takes by different folks, so duplicates be damned, man. My first night at SxSW, I was facing some hardcore health discomforts and was essentially forced to root myself at the Warp Records SxSW showcase for hours. Luckily, the lineup was full of talented musicians; Born Ruffians and Eskmo gave notable performances, and Flying Lotus was a highly anticipated headliner. Let’s just say that he not only packed the house, but was probably the only musician who could have roused me from my death throes and uncontrollable desire to pass out in the middle of the venue. His history of being a hardcore videogame lover is quite obvious when you’re listening to his music, and his love for technology is unbridled; he even brilliantly told the crowd to Twitter that Flying Lotus was killing it at SxSW. And the tech-savvy SxSW crowd did, of course. With a blend of projected visuals, straight-up DJ know-how, and an engaging personality, Flying Lotus really did kill it at SxSW. He’d probably be higher up in my list if I hadn’t been dying, but since I was, I wasn’t able to fully enjoy his set. Nonetheless… respect.

www.myspace.com/explodeintocolors
Having recently relocated to Portland, Oregon, I’m definitely familiar with all the local hype surrounding Explode Into Colors, but I’ve never been able to catch their set until SxSW. To be honest, I expected fairly typical Portland-bred hipster fare, full of bright neons and dreamy dreaminess — certainly enjoyable music, but nothing that would really tickle my fancy in the long run. Well, color me wrong. Explode Into Colors, possibly in contrast to their name, are absolutely characterized by the low end of the musical spectrum. Tribal beats, throbbing basslines, and a mixture of chanted and howled vocals punctuate their music in an almost eerily bouncy way. They are, without a doubt, a band that’s worth scoping out again back home.

The last time I saw Duchess Says was at CMJ 2009, when they were the last band playing CMJ’s M for Montréal showcase. The release of their last album, Anthologie Des 3 Perchoirs, generally fell under the radar, despite being rather brilliant and having a boatload of potential. So, I’m glad that M for Montréal is helping them find opportunities to infect unsuspecting concertgoers with their brand of danceable synth-punk. Alongside vocalist Annie-Claude Deschênes’ usual thrasher-meets-Lolita antics, their performance at SxSW was punctuated by impromptu dancers taking refuge on raised platforms, keyboardist Ismael being angry about the sound (again), and cordial cherries being thrown into the crowd. Deschênes was, as expected, adorably fierce, but even better when she gets lost in herself, as her eyeballs roll backwards into her head.

www.liarsliarsliars.com
Liars are a band that are huge in my personal book, but I always wonder how big they really are outside of certain social circles. There’s no doubt their brand of music is respected and lauded by musicians and journalists everywhere, but do they really appeal to the masses? It’s confusing. The particular afternoon I caught them at SxSW, they were playing to a fairly small but extremely animated crowd. Sound problems ensued, and Liars’ goofy Australian frontman, Angus Andrew, quipped in frustration that sound problems were pretty much what SxSW was all about. But all distractions aside, and with the enlisted help of two additional members, Liars played tracks from nearly all their releases and put on a fantastic show. Despite the fact that Liars, when listened to at home, make fairly introspective music (a notion supported by our interview), they externalize well; they put on a straightforward rock n’ roll show that probably appeals to the masses more than the music on their records does.

www.ddmmyyyy.net
The first time I saw dd/mm/yyyy was about a month ago, in Glasgow, Scotland. It was pure happenstance. I was in Glasgow for a night. They were in Glasgow for a night. Serendipity. At the time, I knew next to nothing about them. All I knew was that I enjoyed their name and that they had toured with These Arms Are Snakes (R.I.P.), one of my favorite live bands ever. That association alone was enough to warrant my seeing them. Well, dd/mm/yyyy have impressed me greatly, and they put on an amazing live show. They’re chaotic in a controlled way, with fun stage banter and tendencies towards playing musical chairs (or musical stage positions) throughout their sets. Every member of the band rotates to play at least a couple different instruments, but it somehow all feels natural. Over the course of SxSW, dd/mm/yyyy went insane and played 18 shows over the course of four days. And because we were video-documenting them, I saw them many times. Some shows were better than others, certainly, but no two were alike. My favorite show took place in the parking lot of a shady bong-and-dildo-shop, on the coldest day I’ve ever seen in Austin. dd/mm/yyyy’s music was perfectly at home in a setting visually defined by trees, leaves, instruments, hair, and the band’s homemade zines whipping around uncontrollably with the wind. It was beautiful, beautiful chaos… my favorite.