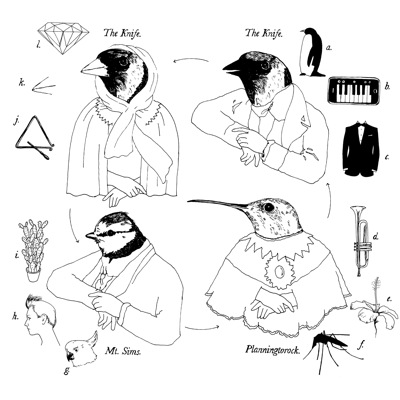 The Knife – Tomorrow, In A Year Album Review Swedish brother-sister duo, The Knife, have become known for their innovative music and extremely weird live shows. Their recent collaboration with Mt. Sims (DJ Matthew Sims) and PlanningtoRock (Janine Rostron, a Berlin-based musician/performer) is definitely a challenge to those who would have called their music “pop” when their albums Deep Cuts and Silent Shout made it big a few years ago. Tomorrow, In A Year is an opera based on Charles Darwin, though it belongs much more in the experimental section than in the classical one. The disc is extremely conceptual; if it were actually performed onstage, it would surely be very moving. But for casual listening, it’s a different story.

Tomorrow, In A Year has all the stylings of an opera, with dramatic instrumental periods and operatic singing. The record begins with an intro that builds with a loose momentum. The second track, “Epochs,” is a mesh of opera singing and bizarre sound samples, randomly interspersed with cymbal clashes and other sounds. It’s jarring, to say the least. Tomorrow descends into darkness for a bit with “Geology,” an obtuse track that matches industrial-type sounds with more opera. This pace continues for most of the record, with long songs comprised mostly of off-rhythm conceptual sounds and samples (organic and inorganic) — and even some throat singing. One of the few breaks in this pattern is the song “Variation of Birds,” which trades operatic singing for male/female vocal harmonizing — rather calming after all the oddness that’s thrown at the listener.

It’s hard to see the direct influence of The Knife until deep into the title track, which is towards the end of the record and runs almost 13-minutes-long. Continuing on with “The Height of Summer,” we hear The Knife’s familiar funky bass beats and electro-synth overtones. The most successful combination of The Knife’s former style and the opera format is in the song “Colouring of Pigeons,” a very long yet accessible song that you can just visualize being performed onstage as you listen to it on your iPod.

It is nice to see a true collaboration between the artists on Tomorrow, In A Year. Listening to the whole record is a bit of a time commitment, and it can be hard to pick out specific tracks to latch onto from the album. Ultimately, though, The Knife and their collaborators aren’t looking to make another hit, just a statement — that much is resoundingly clear. However, within the oddities of the album lies much beauty, and it just takes a careful listen to notice it. Tomorrow, In A Year is not for the musically timid, but those who venture in will be glad they did.

Right on point! It is interesting to note that the album is being performed live. The opera has been performed to European audiences since November of 09. Wouldn’t that be a cool show!