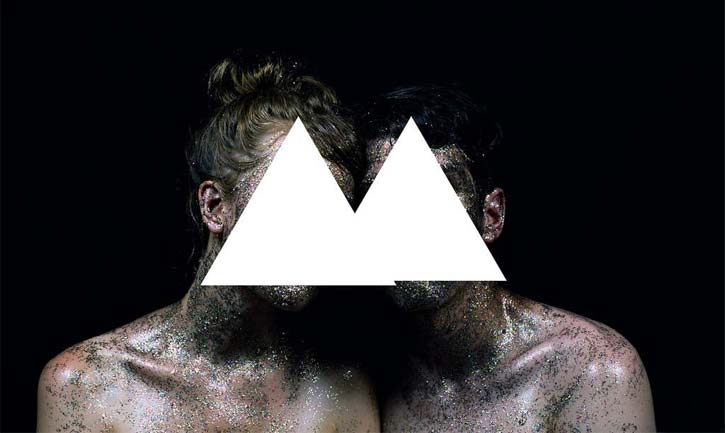 “We suppose that YACHT is attempting to forge connections between underground musical culture and underground spiritual culture.” — YACHT

For two months in early 2008, Portland-based electropop duo YACHT set up camp in a small town located in the desert of West Texas, away from the city lights, but at the threshold of a completely different type of lights. Known as the Marfa Lights, the inexplicable dashes of lights that appear every night in the sky of Marfa, Texas, impacted Jona Bechtolt and Claire L. Evans, the two members of YACHT, in a profound way. On many occasions during their two-month stay in Marfa, the pair would grab a blanket, sit on the roof of their car, and observe the lights in the open desert. Not only did the lights go on to become the biggest inspiration for YACHT’s latest album, See Mystery Lights, but they also changed Bechtolt and Evans’ view of the world. “We’d seen something truly rare, truly magic, truly unexplained, and yet evidently real,” the pair explain. “Coming face-to-face with something like that changes you. It humbles you. It puts our microscopic human relevance in the grand scheme of this cavernous universe into perspective. We had long conversations about the lights and their implications to us as people. Although we’re very different from one another, they affected us identically.”

Bechtolt was the first out of the two to see the Marfa lights. In 2004, some people in Austin recommended that he make a stop to see the lights in Marfa while on his way to California. After seeing the lights, he drove to Los Angeles to play a show and met Evans for the first time; her band was also on the bill. Later on, while traveling together, they decided to check out the Marfa lights together.

The lights made such a lasting impression on the two that in 2008, they decided to rent a house in Marfa in hopes of producing some type of tribute to their experience. At the time, they were not sure if it would be in the form of music.

“We didn’t entirely know why we had come to Marfa, except that we wanted to know what it was like to live alongside the phenomenon,” they say.

The first thing that they came up with was an 8-minute compilation of mantras. Bechtolt and Evans decided to create the tribute around their own belief system after becoming interested in human rituals of esotericism and mysticism. Given pop music’s tendency to feature repetitive elements, it was only natural for Bechtolt and Evans to mold the mantras into the tracks that make up See Mystery Lights.

While the songs do contain Bechtolt and Evans’ thoughts on topics such as heaven, hell, darkness, and light, they do not come off as commanding. YACHT do not go off on rants; instead, they hone in on catchy one-liners , such as “It’s not a place you go/ It’s a place that comes to you,” on the song “The Afterlife.”

The subtlety of YACHT’s messages continue on in songs like “I’m In Love With A Ripper” and “Summer Song,” where their mantras are concealed within hyper beats, metallic-sounding claps and clicks, and playful male/female vocal exchanges.

Bechtolt and Evans drew amazing energy out of the desert and Marfa lights. Whether it is the spiritual influence of the Marfa lights or the music’s radiant, electronic characteristics, listening to the album is like watching the sky shift from night to morning and witnessing seasons race through time.

Considering that Bechtolt and Evans have a deep understanding of how to make a great dance song, it is no wonder they feel at home with being a new addition to DFA Records. Even before See Mystery Lights was released, YACHT toured with DFA Records’ flagship band, LCD Soundsystem. While on that tour, Bechtolt wrote “Summer Song” as a love letter and salute to LCD Soundsystem.

“For us, DFA is like a golden key,” Bechtolt and Evans say. “They have a kind of global recognition for being a label with excellent taste, and that vote of good confidence has given us access to all the tape decks, bedrooms, dance floors and parties of the world. People who never would have sought out YACHT have been presented with us, and have accepted us as part of the family.”

In 2009 YACHT traveled all over the world in support of See Mystery Lights, including a U.S. tour with the Yeah Yeah Yeahs, and shows in South Korea, China, Brazil, Australia and Europe.

Being the type of people who embrace evolution, YACHT will undergo a new tour under the moniker of YACHT And The Straight Gaze; this time, they will tour as a 5-piece group. The Straight Gaze will be formed by three reputable musicians from their hometown: Rob Kieswetter of Bobby Birdman, Jeff Brodsky of Jeffrey Jerusalem, and D. Reuben Snyder of Rob Walmart.

“We suppose that YACHT is attempting to forge connections between underground musical culture and underground spiritual culture. After all, both are motivated by the desire to create something more real, special, and rare than what is being presented by conventional organizations.”
— YACHT

Bechtolt and Evans have stated that they feel it is necessary to YACHT in new forms about every six months, and this is not the first time that YACHT has presented a new incarnation of themselves. YACHT, which started in 2002 as Y.A.C.H.T. — an acronym for Young Americans Challenging High Technology — was Bechtolt’s solo project. The now 29-year-old grew up in Astoria, Oregon and played drums in punk bands as a teenager. He became a member of another Portland electropop duo called The Blow in 2004, and for a few years was doing double-duty with YACHT. In 2007, Bechtolt began focusing solely on YACHT.

Evans, who was born in the UK and attended college in Los Angeles, contributed to a previous YACHT album, I Believe in You, Your Magic is Real, and officially became a member in 2008. Previously, she had played in various noise bands in Los Angeles and made a name for herself as a science writer, the latter of which she still does.

Bechtolt and Evans say that the transition from YACHT as a solo project into a duo was not a conscious choice, but also not totally easy.

“Collaboration is always difficult, as it requires some level of ego sacrifice — we’re no exception,” they say. “However, we were lucky to have shared many powerful experiences together, most importantly the ‘mystery lights.’ Everything in the end has to come together, and when it does, it becomes larger than each of our personal egos or identities. It becomes YACHT.”

Through their live performances, YACHT have become known as musicians who are more than just high-energy infectious music and dancing; the performances of their music also encompass visual elements. In hopes that their fans never see the same show twice, Bechtolt and Evans play around with video elements, song arrangements, and interaction with the crowd with every show.

“The visual elements are absolutely essential to our quest to radically shake people out of the preconception that the YACHT show is going to be like a ‘regular’ concert,” Bechtolt and Evans say.

Likewise, YACHT can hardly be considered a regular band. Bechtolt and Evans see YACHT as a band, a belief system, and a business. One of the most eye-catching things on YACHT’s websites and profiles on social networks is the text that reads, “YACHT is not a cult.” Bechtolt and Evans find it necessary to repeatedly point out that YACHT is not a cult, as some people are quick to associate the term ‘cult’ with any group that expresses a belief system. But like
the lyrics on See Mystery Lights, the band’s websites also include statements about darkness, light, free thought, afterlife, and extraterrestrial intelligence. Bechtolt and Evans promote free expression and invite anyone to become a member of YACHT.

“There is something richly American and powerfully human about people who strike off to create their own religious or cultural identities, everywhere from starting hippie communes to having religious visions, and we really respect that tradition,” the pair say . “We find it distasteful how the conservative religious mainstream condemns this kind of behavior, as we see it as true spirituality.”

Despite what their detractors might say about them, YACHT have managed to take their powerful experiences with the Marfa lights and channeled them into dynamic dance music.

“We suppose that YACHT is attempting to forge connections between underground musical culture and underground spiritual culture,” they say. “After all, both are motivated by the desire to create something more real, special, and rare than what is being presented by conventional organizations.” […] And there’s probably no better soundtrack for watching the skies than an album inspired by the Marfa Lights. […]