“Through the chaos, there’s a thread.”

Eatcho has quit his dayjob. He’s late on rent. He knows that being a full-time artist is difficult to impossible in Portland, Oregon, a town where everyone who makes your coffee, bags your groceries, or pours your beer has his or her own creative project to fund. Without a day job, making art can’t possibly be a hobby; it has to pay the bills. Eatcho says it dawns on him regularly that, “[The situation] is kind of scary — but I wouldn’t want it any other way.”

Mania and energy are as apparent in the man as in his work. As we sit and shout over espresso beans being ground, Eatcho sips his drink and tells me that one reason that he’s able to work intensely is that he’s an insomniac, averaging just four or five hours of sleep a night. This also means that, while the bedroom studio setup is constricting to a lot of artists, he prefers it.

“When I get up, it’s good to have my work right there,” he explains. “I mean, I have that thing where I’m constantly running upstairs to put my ideas down.”

And so, Eatcho fully flexes every artistic muscle. His two dimensional works run the gamut from small pen and ink comics to full-color murals, and he also puts out sculptural pieces. As Eatcho changes mediums, his style is constantly morphing. The hilariously crass Blackheads comic shows a series of flat, slit-eyed faces floating among doodles that spit out Eatcho’s dry humor (a four-eyed head says, “Now u see why I grow my bangs”). A more recent series of oil paintings show subjects from one of his favorite photography sources — high school yearbooks. The figures are painted in high-contrast black and white, with splashes of brightly colored patterns and tags. Each face shows an awkward, touching vulnerability. And there’s even more comic relief to be found in the form of a small, compellingly gross painted sculpture of a gut-textured mound, its lovely long eyelashes vomiting up a neatly lettered alphabet.

It’s hard to pin Eatcho down on a favorite medium, and he admits that tendency makes it difficult for him to create what he calls “that visual addiction” — a signature style that makes him marketable to a wider audience. “I mean, people say, ‘I want an Eatcho’ but what does an Eatcho look like?'” he questions. Yet, he grins and shrugs this off saying, “I think that I will always be doing work like this. If people like my work, they’re going to have to say, “Well I don’t know what the hell he’s going to do; let’s see what happens.”

The first time I remember seeing Eatcho’s work was inside a converted school bus which houses The Grilled Cheese Grill in Portland’s Alberta Arts neighborhood. The bus’ ceiling is a surreal swirl of real and imagined creatures; it’s graphic, playful, and tightly knit together to create the kind of dynamic tension that I recognize as a signature of all of Eatcho’s pieces. He posits that, “Through the chaos, there’s a thread.”

Creating large murals such as this — a collaboration with fellow artist Jason Graham — are, in Eatcho’s mind, like staging a play. He describes the elements as “actors within a scene.” Although different “spikes” and areas of interest are plotted, he likes to think of the overall work as “filling in characters,” and in this way, creating “a conversation” both between the elements of the work and the two artists. The intricate details of his murals, crafted over such an expanse of space, appeal to Eatcho’s manic nature, for not everything can be plotted.

Eatcho desires to constantly be learning new skills and techniques. He wants to “get good at everything I see and see everything I can,” and one route is by making himself aware of the breadth of work that is being made outside of himself. When we discuss influences, he talks about currently being interested in high-contrast black and white photography more than in drawing or painting, but also mentions being inspired by everything from Saturday morning cartoons to Gustav Klimt.

Lastly, I’m dying to ask about the origin of that moniker, Eatcho. It turns out the name stemmed from chalk drawings he’d made telling kids to, “Eatcho veggies!” Eatcho’s body of work thrives on the manic consumption of different mediums. The artist himself is as addicted as he wishes his prospective audience to be, and his work leaves both parties hungry for more. 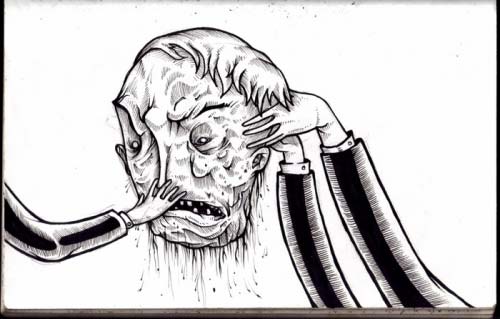 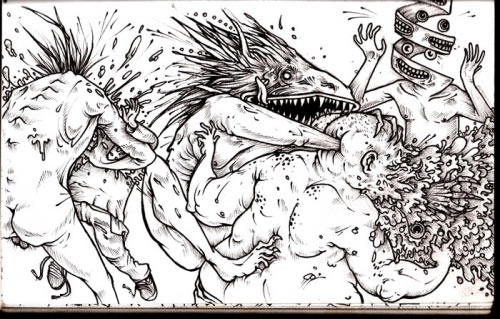 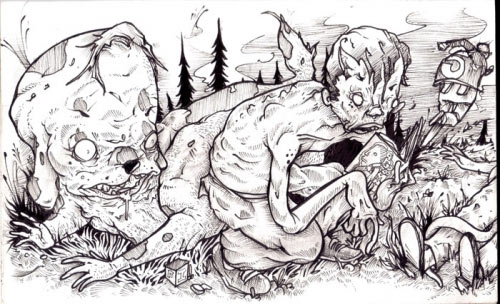 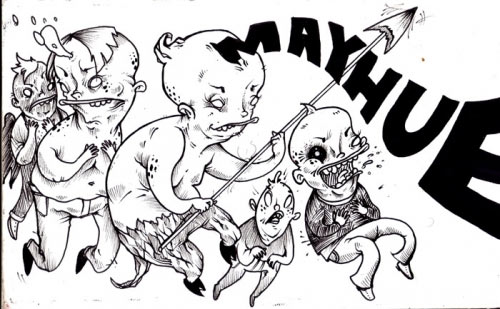 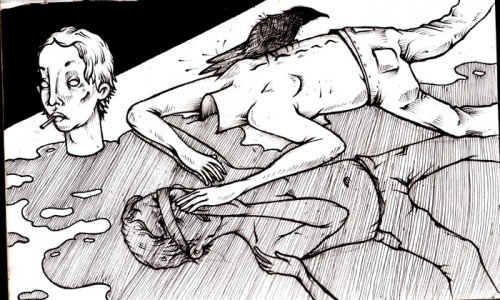