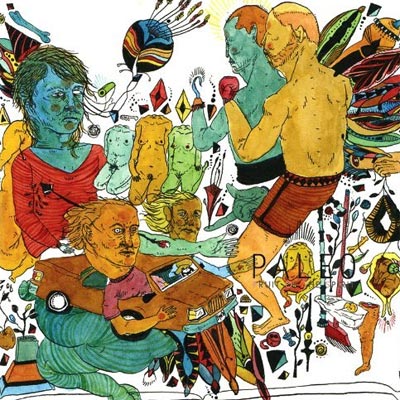 During my first listen to this record, I hated it. It seemed whiney, and the tape hiss and overall crunchiness overshadowed the melodies. The songs were like musical vitamins, so concentrated my body couldn’t absorb them. But after a few more listens, the figurative taste that Fruit Of The Spirit left in my mouth inverted itself, and before I knew it, I was entirely obsessed with this album.

After doing a little research on Paleo, I uncovered the reason for the detour which brought me from hate to love: this guy is my doppelganger! Like Paleo, I have completed a project where I recorded a song a day for a year; however, his triumph predates mine by a couple of years and it also landed him a record deal a couple of years after he finished (but perhaps my call from a David Geffen is forthcoming?!). And, similar to Paleo, I have often relished in the sounds produced by what I call less-likely-to-succeed instruments — miniature-sized guitars, peculiar percussion instruments, and funky little pianos like one children would play on. Also, his purported flair for writing thoroughly optimistic songs has matched my natural tendencies and predilictions.

All that said, perhaps Paleo is more like a kindred spirit than my doppleganger in its original sense? Paleo and I have very different sound stylings, and though I’d love to tell you all about mine, I’ll graciously leave that for another writer who can review my album one day. Instead, I’ll give you my take on this disc: Fruit Of The Spirit is easily the most unique and original collection of songs I have heard in years.

“Lighthouse,” which starts this album, has sunk itself into my brain like the ship it depicts in its lyrics. “Shine your light for me,” Paleo croons, and this simple string of words gives this song summer hit potential. Track two, “Over The Hill And Back Again,” picks up both in style and flow from the song before, and its drums — both steel and tom tom — carry on the indie-meets-island melody. This song also cradles what is perhaps the best line of the album, breaking the typical head-over-heels adage: “I am not a fool for love anymore/ It was never enough for me…”

The third song, “Pharaoh,” has a longing sentiment and is heavier than the rest in both lyric and sound. The piano treads with the weight of the vocals which hang off of it, breathily expounding, “Oh, the struggle…” And standout track seven, “Holly Would,” with its rudimentary but nevertheless driving percussion of tambourine, bass drum, and hand claps offers incendiary lyrics: “I would choose to follow you into any kind of fire…” and “Where is the passion, stirring the ashes…” How easily this song leaves its impression! But my current favorite track on the album is track eight, “Buddy Buddy,” due for the most part to its ear-piercing howl, which is simply a refrain of the words “Calling you.”

I reiterate: upon the first listen, one could be put off a little by this work. But then, something so raw and primal takes charge, and it becomes so interesting and admirable. Paleo harnesses honesty in his music that wins you over. “Honey Be Reckless” could make its way into an elementary school classroom and could easily be sung by a chorus of young voices even if the outro lyrics, “Nothing is real,” are potentially quite dark and more reminiscent of the kids as angsty teenagers. This album preaches a spectrum of experience.

Fruit Of The Spirit may not have expert production value, it may not be linear, it may not capture Beatles-esque songwriting, but it is true and apparently tried—the word on the street is that Paleo has traveled tens of thousands of miles over the last several years writing, recording, and performing. This album is heartfelt and unapologetic. And that makes it bold. And that makes it good.