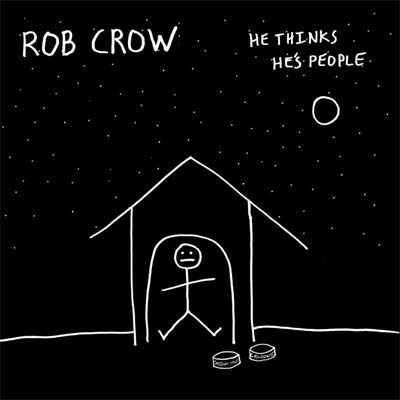 Rob Crow is a man of multiple musical ventures. One could even say he is a man of multiple musical adventures: hailing from very distinct bands such as Pinback, Goblin Cock, The Ladies, Heavy Vegetable, and Thingy (amidst several others), he now brings us a versatile new solo record curiously entitled He Thinks He’s People. I am still trying to uncover what that title means or could mean, just as I am still trying to decipher all the lyrics for the songs on this album.

From what I can make out, the words throughout the album are quite clever and curt, often times posing provocative questions like “Does your memory do you justice?” from the track “Locking Seth Putnam In Hot Topic” or “How much did you pay? How much is your soul worth now?” from “Scalped.” I am certain there are even more poetic nuggets hidden in this work, waiting to be excavated; and fortunately, Crow has a lyric-illuminating website which should be updated with the lyrics to these new songs shortly.

Though the lyrics are a bit of a challenge to make out on the whole, the vocals exist as a vital, additional instrument, which can soothe in certain moments, like they do for the song “So Way,” while increasing the overall dynamics of songs, as on the hard-charging tune “Build.” Surely, the words are worth their denotative and connotative weight lyrically, but they are also successfully harmonious regardless of their meanings.

This was another 2011 release that was a little slow to grow on my ears, but my latent appreciation surfaced strongly by about the fifth listen. Soon enough, I was drawing connections between the vocal melodies and the guitar tones with other musicians, global and local. Some songs, like “Sophistructure” and “Tranked” have a flavor reminiscent of Filter, due namely to the vocals which call to mind the distinct soft-yell crooning of Richard Patrick. Additionally, I now recognize that two of my favorite Bay Area musicians, Old And Gray (aka Buddy Hale) and Ben Almond (aka Benjamin Martin) have been noticeably influenced by Rob Crow’s style, which makes me imagine that many other indie rock outfits — especially solo acoustic ones — have also had a helping hand from Crow.

Overall, the songs on this release are compact: not one breaks the three-and-a-half minute mark. Songs like “Unstable” and “Pat’s Crabs” are shorter than two minutes each. On the flipside, the album fluidly cycles through with barely a pause between most tracks — so it is as if this album were a symphony movement of one forty-minute contiguous piece of music.

The beautifully somber mix of piano, electric guitar and vocals in the final track, “Hangnailed,” make it one of my favorite tracks on the whole disc. The quotidian refrain manages to be surprisingly haunting: “Clean out your desk and you go.” In this song, like in many others, Crow has a capacity for taking simple ideas and making them seem heavy with inference. He Thinks He’s People sneaks up on the listener to captivate him or her with more and more depth upon each successive listen.