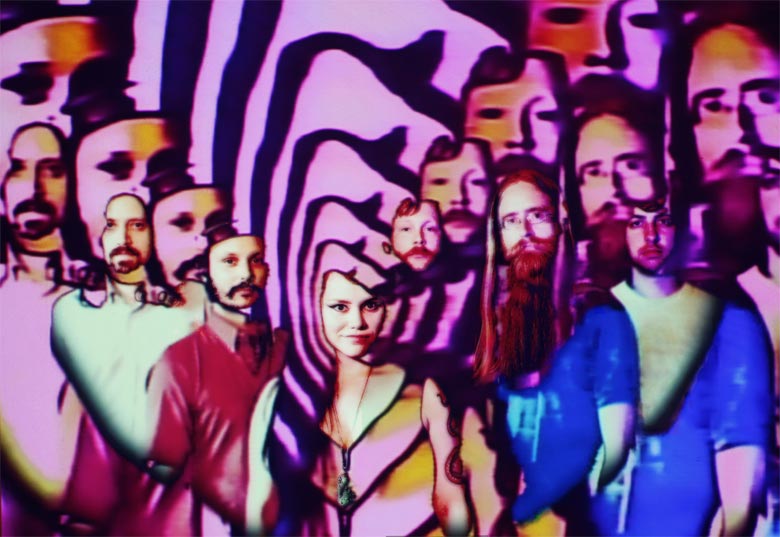 In Midday Veil’s new video for “Moon Temple,” vocalist Emily Pothast has edited source material she and guitarist Timm Mason generated last year during a residency at Experimental Television Center in Upstate New York. At its gentlest, the video is a silky smooth ripple; at its most severe, a rigid and noisy gallop through harsh-edged brain wave terrain. Pothast guides you to step through purple-hued worlds as she morphs from a candle-wielding human into multiple faces of sensuality, to disintegrate in and out of forms of ghostly apparition. 23:50 in duration, “Moon Temple” is the type of video you’d want to project on a big screen, for a richly synesthesic experience.

The band has just finished mixing The Current, their second studio album with producer Randall Dunn (Boris, Sunn o)))). Stream the entire improvised EP below, and catch them on a string of tour dates, including a set at the upcoming REDEFINE SXSW showcase at House of Commons, Austin. (More details and full lineup coming soon, and you can see last year’s recap HERE.)

Read our interview with Emily Pothast about Midday Veil and her record label, Translinguistic Other

[…] roughly a year of work, the video debuted today with a writeup from Vivian Hua at Redefine Magazine: At its gentlest, the video is a silky smooth ripple; at its most severe, a rigid and noisy gallop […]