Bumbershoot Festival signifies a lot of things for Seattle, but the main mark of Bumbershoot is that fall is upon us. The annual Labor Day arts festival in downtown Seattle traditionally comes with both good weather and the need for umbrellas, aka a bumbershoot.

Bumbershoot’s place in music festivals across the nation includes one big distinction; it name isn’t merely the Bumbershoot Music Festival, but the Bumbershoot Music and Arts Festival. The addition of arts is noticeable, for as much music stretches across multiple stages in Seattle Center, there are just as many comedians, writing panels, art exhibits and impromptu busking performances on the festival grounds.

Bumbershoot has always done a great job of getting some old school acts to show their face, and the crowd make-up is always funny because of it. Those watching Gary Numan were no different. Numan has been churning out music since the late ’70s, but the majority of today’s youngsters know him for the chart-topping hit “Cars” and its early, slightly rudimentary use of electronica in music. I am also one of those ignorant youngsters, aware of who Numan is and his contributions as one of the pioneers of electronica and gothic rock, but with really no idea what he truly sounded like outside of “Cars”.

To almost put Numan’s performance in a nutshell, I’ll direct you to the tweet I sent immediately into his set (ignore my typo please, and for my shameless Twitter plug, follow me here).

Gary Numan just blew me away. He is one song into his set. #Bumbershoot

As dusk set, the lights were blaring for Gary Numan, who even at the age of 55, contorted his body for dramatics at angles I haven’t hit since I was four-years-old. Gary Numan was just heavy as shit, and it was awesome. Even “Cars”, which he launched into about five songs in, was heavy as shit and all of it was unexpected for my ignorant ears. Gary Numan’s performance was watching all the precursors for Trent Reznor laid out right in front of you, and almost seemed like a live-action History Channel viewing. Bumbershoot has always been the best about scheduling these kinds of acts, and it was the perfect way to end the first day of music.

To be honest, for a multitude of reasons, I was most excited to see Baroness on the Bumbershoot bill. Reason number one: previously Bumbershoot stationed all the heavy bands in the horrible confines of the Exhibition Hall, where the echoes slaughtered whatever was coming out of the amplifiers. Reason number two: the band was involved in such a terrible bus crash that the fact that they are even touring still almost seems like a miracle. But here they were, outside, in the flesh, and before a large crowd eager to see the band back in town.

Baroness have received great critical acclaim for all of their colored theme albums, but the real treat is watching how tight the band is live. Even with two new members as a result of the bus crash, bassist Nick Jost and drummer Sebastian Thompson, Baroness plays beyond their age — a funny thing because the band isn’t exactly comprised of spring chickens. Guitarist-vocalists John Baizley and Peter Adams feed off each other constantly at the front of the stage, lending an extra charge to songs that have more than enough energy on their own. Baroness is metal for adults, made by adults; there isn’t a single stupid breakdown, misplaced pinch harmonic, or stereotypical lyric throughout. 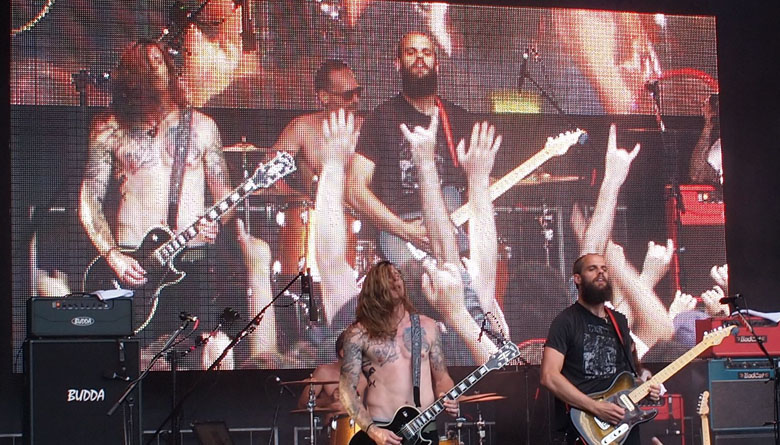 Kendrick Lamar’s rise through the rap game is quite the thing of fairy tales. At the age of 16, he released his first mixtape, and at the age of 25, he dropped Good Kid, M.A.A.D. City, becoming a household name in the process. For Kendrick Lamar to blur the lines between mainstream hip-hop and overwhelming critical success is quite a feat. Often times, the mainstream rappers that bring the youth of America to Bumbershoot are, shall we say, not nearly as good (to say the least). So when throngs of people wearing “Bitch Don’t Kill My Vibe” crop tops descended on the main stage, the honest first impression was that yet another mainstream rapper was going to take the stage.

Kendrick Lamar is hardly just another mainstream rapper, however, and it is completely evident in his live performance. He was out there, on the vast expense of the Key Arena mainstage, virtually on his own. There were no hype men — just a couple of other guys playing instruments shoved as far back on the stage as they can be without standing behind the curtain. At a Kendrick Lamar show, all you see is Kendrick Lamar, and he knows it. He came out on stage and took flat out possession of his crowd, barely stopping to relinquish any control throughout his set. It is an impressive showing for one man to have an entire arena in the palm of is hand, but Lamar does it, and he does it with such authority it is hard to believe he is so new and so young.

The old curmudgeon in all of us yearns for the day when rock n’ roll made people dance without all of these new, sophisticated electronics making blips and bleeps everywhere. Well, maybe that isn’t for all of us, and !!!, aka Chk Chk Chk, still fall victim to a synth and drum machine or two, but no band can get the crowd moving quite like the dance-punk band. Vocalist Nic Offer was out in full force in his traditionally too-short shorts, celebrating the waning summer sun with the best of them.

!!! is hitting the festival circuit in support of this year’s THR!!!ER but at times you wouldn’t have known it. They played a grooving and moving set spanning much of their catalog, and although it took the crowd a bit of time to warm up to the earlier songs, by the end, they had no issues losing themselves to the guitar, bass and drums. Offer launched himself into the crowd on multiple occasions, getting sweaty and intimate with a couple of people in the process. !!! makes the old people feel young and the young ‘uns feel old all at the same time. Bizarrely, they aren’t for everyone, which seems a bit odd because !!! is the perfect soundtrack to a summer day. When I described the band to a teenager as “guys that make you dance, but do it relying on electronic beats”, his interest seemed piqued. They left after standing stock still for the first three songs, apparently unimpressed by the band and Offer’s flamboyant, yet excellent dance moves. To each their own, I guess.

It seems like yesterday that Superchunk started churning out their punk-influenced indie rock, but I Hate Music is their 10th album over their 23 year career. Now, most bands with a 23-year career tend to attract an older audience at Bumbershoot, but Superchunk has maintained relevancy with the younger folk by providing a relevant life performance. Led by Mac McCaughan on guitar and vocals, Superchunk kicked it into high gear immediately and didn’t relent for the entirety of their set. By the end of it, generations of people were left dancing up a storm, and like all good bands having fun on stage it was tough to tell who enjoyed it the most — the band or the crowd.

There also needs to be a short shout-out to 206 hip-hop, which specifically does not involve Macklemore. Nowadays, “Thrift Shop” and its bajillion Youtube views are absolutely synonymous with Seattle hip-hop on a national level, and, although kudos to Macklemore and Ryan Lewis on their success, the duo are hardly the best example of the beats flowing out of the Pacific Northwest. Bumbershoot has always held a special place in its collectively-curated heart for the sounds of the street coming from the each neighborhood in the city, and the crowd response has justified the bookings each time.

Grynch hails from the Ballard neighborhood, which, way back in the day, was a Scandinavian fishing town. Seattle gobbled it up as big cities tend to do, but Grynch, like any good Ballardite, pays homage to his neighborhood with the best of them. He premiered a bunch of new tracks for an album he expects to be out sometime this winter, all the while holding down the crowd during his afternoon matinee set. 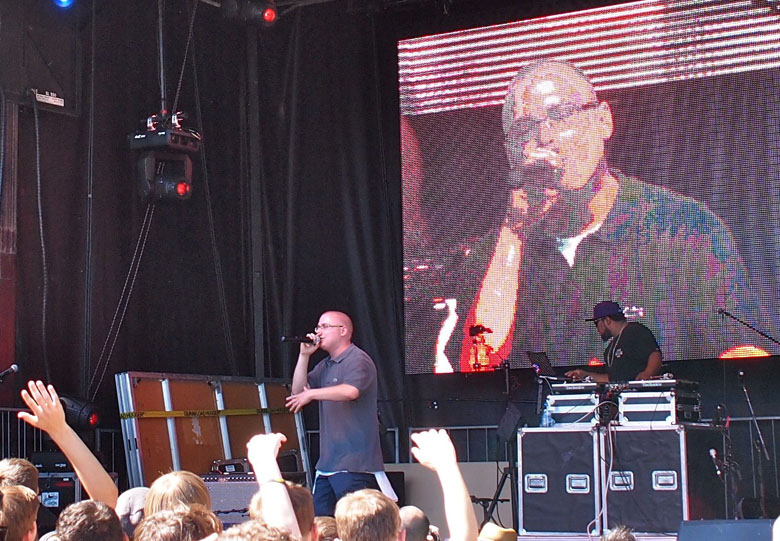 Later in the afternoon, on the same stage as Grynch, The Physics continued the hip-hop onslaught with their collaborative style, paying homage to the south end of Seattle. The Physics are pretty easy listening when it comes to hip-hop, but just because the beats don’t drop with bone crushing intensity doesn’t make their performance any less zeroed in. They rapped without missing a beat during their set, and showed that you don’t need to have anything less than a couple of turntables and a few microphones to hold court at Bumbershoot.