19 Aug Female Coming-Of-Age Tales: A Three-Way Film Review of La Sirga, They’ll Come Back, and Tall As The Baobab Tree

Posted at 10:49h in Film by Jocelyn Edelstein 0 Comments
Defined by Merriam-Webster as, “The attainment of prominence, respectability, recognition, or maturity,” “coming-of-age” is widely considered a point in every young person’s life when they walk the precarious edge between being a child and being an adult member of their community. This edge might be magnified by any number of given plot turns – be it a forced exile, an unexpected abandonment, or the opportunity to fight for something of great importance; in the feature directorial debuts, La Sirga by William Vega, They’ll Come Back by Marcelo Lordello and Tall As The Baobab Tree by Jeremy Teicher, the coming-of-age narrative is central, poignant and profound.

Vega, Lordello and Teicher not only tend to their subjects with compassion and intimacy, they also experiment with the artform, making strong and inventive choices in sound design, cinematography and narrative format. These powerful representations of the coming-of-age experience are set amidst different cultural contexts, yet all focus intently on the heroine, allowing specific cultural norms to be digested seamlessly while providing a rich and intriguing backdrop for each protagonist. All three films explore, in different ways, a sense of muted grief and desperation that meditates on the potential emotional reverb of lost innocence.

All director interviews and film screenings were facilitated with the aid of the San Francisco International Film Festival 2013.
“There is a particular atmosphere in the natural conditions of the place, which we used as an expressive vehicle in the movie. The bleak humid climate, the cold and the fog all gradually create a very coherent mood for the story. The fog doesn’t let us see beyond certain limits, and this provokes an inevitable suspense. I think that is what the film is about; human incapacity to see it all.” – William Vega, via The Santa Barbara Independent 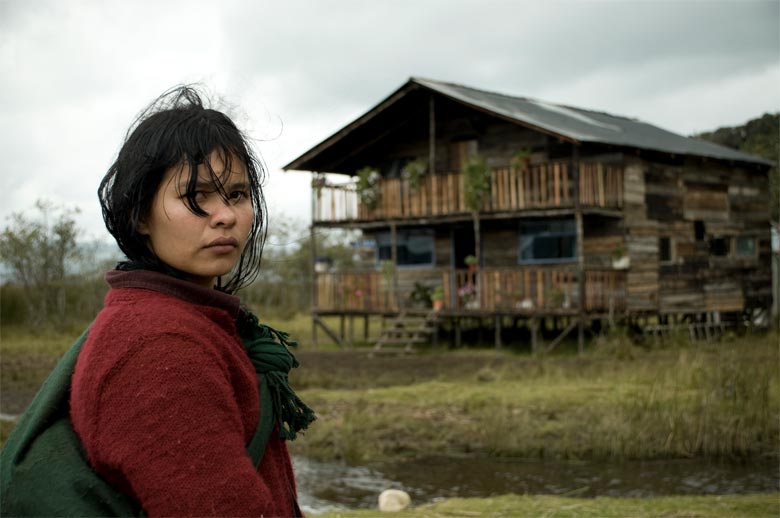 In a January interview with The Santa Barbara Independent, director William Vega touched on the mood he was trying to capture through La Siga, saying, “There is a particular atmosphere in the natural conditions of the place, which we used as an expressive vehicle in the movie. The bleak humid climate, the cold and the fog all gradually create a very coherent mood for the story. The fog doesn’t let us see beyond certain limits, and this provokes an inevitable suspense. I think that is what the film is about; human incapacity to see it all.”

The starkly haunting world of William Vega’s La Sirga opens as we follow the exhaustive trek of his protagonist Alicia through the mist-veiled, barren hills of remote, rural Colombia. The only auditory element: her footsteps and the hissing whistle of incessant wind – until she eventually passes out. The pervasive sense of Alicia’s exile is tangible immediately, not through arcing narrative, explanatory dialogue or back-story memory sequences, but through Vega’s keen ability to capture meaning within the felt sense of Alicia’s world.

Found by a nearby villager and taken to her Uncle’s dilapidated bed and breakfast, Alicia is expected to earn her stay by sharing in the laborious upkeep of her surroundings. She enters a tough, work-laden world willingly, making it easy for one to imagine her other alternatives as being somehow more disparate.

Outside of one brief dialogue exchange in the beginning of La Sirga, which indicates that Alicia’s village has been burned and that it’s not the first village in the area to suffer this tragedy, the film doesn’t aim to give the audience historical context or details about political motives. It simply asks us to walk with Alicia while she struggles to create a new world for her survival. Still, her childlike vulnerabilities find their way to the surface in fleeting moments that make the heart ache. It is this slippery surface between her innocence and her hardened shell that give Alicia’s particular coming-of-age storyline significant impact. I have yet to see another film that meditates on the minute sensory details of place so bravely. Using highly limited verbal discourse and no musical soundtrack albeit one moment when a group of characters pick up instruments and play a folk song, watching Vega’s work is akin to taking a tai chi class; it’s slow, fluid, mesmerizing, and entirely unconcerned with linear destination points.

La Sirga is not for the action-driven film enthusiast or anyone with a short attention span; rather it is a crawling, deeply-layered and at times enigmatic look at one girl trying to be a woman in a male-dominated environment, with characters consistently walking a tightrope between nurturing and predatory. Gorgeous camerawork and subtle, intelligent sound design make the molasses pace of La Sirga pleasing, if you’re willing to steady your breath, get comfortable, and appreciate the artistry of a meal served in courses.

“From the moment one discovers the world and the way other people live in the world, one ends up creating a consciousness of who they are. For me, the discovery of myself is very connected to the discovery of who others are as well.” – Marcello Lordello 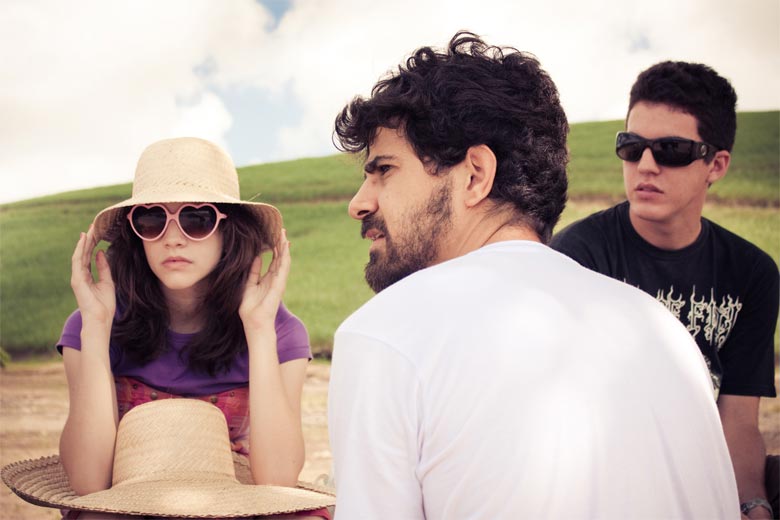 In an interview I conducted with Lordello earlier this year, he commented on his perspective of the coming-of-age experience, one keenly felt in the development of his protagonist’s story. Lordello says, “From the moment one discovers the world and the way other people live in the world, one ends up creating a consciousness of who they are. For me, the discovery of myself is very connected to the discovery of who others are as well.”

In the first scene of Marcelo Lordello’s They’ll Come Back, we watch from a bird’s eye vantage point as a car screeches to a halt and muffled adult voices argue with children until brother-sister pair, Cris and Peu, are forced out of the car and left on the side of the road in what one imagines to be an extreme disciplinary tactic enacted by overwhelmed parents. Camera swooping in close, They’ll Come Back transitions smoothly from the distant eavesdropping-esque experience of the first scene to incredibly intimate close-ups of Peu and our protagonist, his younger sister Cris. Anxiety gains momentum, day turns to night, Cris and Peu wait on the curb and no, “they” do not come back. When big brother leaves her on the side of the road to seek out help and Cris waits past the point of comfort for his return, she makes the choice to venture past the curbside. Thus begins her own quest to find help getting home.

Lordello’s film is placed where he is resides, in the rugged and lush Northeast coast of Brazil, and his protagonist wanders through this world amidst a series of interactions with the evocative, weather-worn people who populate its poverty-stricken landscape. Most of the cast, including our leading lady, hails from the area where the film takes place and came in with little to no acting experience. The candid way this reads on screen in They’ll Come Back, lends itself to the rawness of Cris’ journey, as she earnestly seeks help and simultaneously discovers independence. Although more plot-driven than La Sirga, They’ll Come Back is still very much a character-centric cinematic experience that conjures an almost Alice in Wonderland-type sensibility throughout Cris’s perilous, humorous, and dramatic episodes on the road.

“The film to me is really about what it feels like to be growing up and finding your footing between the traditional and modern world… If the students had told me, ‘Well, you know the hardest part about trying to come of age is finding time to take the cows out to pasture and still go to school…’ If that were the biggest problem instead of early marriage than the movie would have been about that.” – Jeremy Teicher 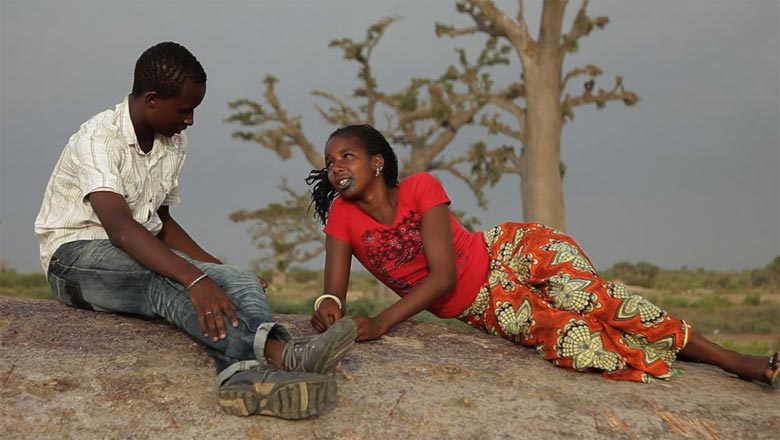 The seeds for Jeremy Teicher’s feature debut were planted when he began working in a small village in rural Senegal on This Is Us, a film project that mobilized students living without modern amenities to write and narrate stories about their lives and the challenges inherent in their day-to-day experiences. It was this project that inspired the narrative, Tall As The Baobab Tree, and it is no surprise that Teicher’s film delivers a sense of both intimate comfort and intelligent design, clearly derived from the artist’s patient envelopment in the subtleties of the culture where the story unfolds.

In a small Senegalese village live a mother and father with their eldest son and two daughters. The story opens on a conversation between the sisters. Brief and effective, their powerful bond is highlighted through simple dialogue that hums with depth — the kind of depth felt on screen when performance, writing, directing and production synthesize to form a seamless, integral whole. It is this hum of authenticity that Teicher’s film revolves around, influenced by his previous experience deeply listening to the stories of the community he worked with. He didn’t make Tall As The Baobab Tree with an agenda to depict the challenges of child marriage, (a theme central to the story’s plot), but rather sought to make a film reflecting what the community of youth truly saw as urgent and alive. Emphasizing this in a telephone interview I conducted in June, Teicher said, “The film to me is really about what it feels like to be growing up and finding your footing between the traditional and modern world… If the students had told me, ‘Well, you know the hardest part about trying to come of age is finding time to take the cows out to pasture and still go to school…’ If that were the biggest problem instead of early marriage than the movie would have been about that.”

Teicher’s protagonist, Coumba, is finishing her high school education when she learns her younger sister, 11-year-old Debo, is going to be married off in order to receive a dowry that will help their family in the aftermath of their older brother’s sudden injury. Throughout the rhythmic yet suspenseful unfolding of Coumba’s quest to make money that will supplement the dowry and change her sister’s future, Teicher’s filmmaking is so non-intrusive that it is easy to forget you are separated from the world of the film by an impassable screen. Truly powerful storytelling dissolves boundaries. It pulls us, unresisting, into the heart of an unknown world, leaving us altered by the transformative experience of empathizing with something outside of ourselves. In Tall As The Baobab Tree, Teicher gracefully combines his filmmaking tools and delivers a beautifully shot story, with captivating music, well-paced development, and haunting performances.

Tenacious, vulnerable, resistant, rebellious, desperate, divine – all these words come to mind when I summon the phrase ‘coming-of-age’ up in my psyche. Stories will continue to take apart this passage and hold it up for us like a mirror. The ones that do it well, like La Sirga, They’ll Come Back and Tall As The Baobab Tree, will reflect something so ancient and understandable in their telling, that we learn to understand ourselves and our own passages through an entirely new language.