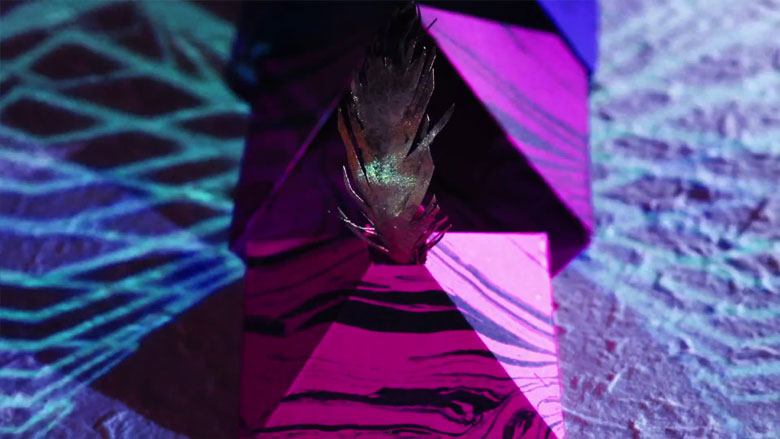 In this stop-motion animation music video for Pure Bathing Culture’s “Dream The Dare”, director Hayley Morris — along with help from Caleb Wood — turns what PBC describe as “psychedelic emotional imagery” into psychedelic visual imagery. Full of colors soft and bold, an array of whirling geometric shapes comprise landscapes that are ever-mutating, as a raven flies above the dreamy terrain. In this compare and contrast interview, Pure Bathing Culture and Morris share details about the intention behind this track and video, as well as its mythological inspiration and technical details. 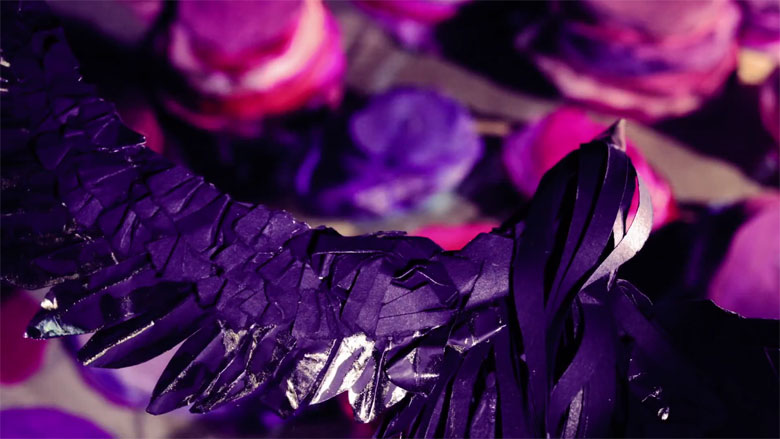 In this stop-motion animation for Pure Bathing Culture‘s “Dream The Dare”, director Hayley Morris — along with illustration help from Caleb Wood — turns what PBC describe as “psychedelic emotional imagery” into psychedelic visual imagery. Full of colors soft and bold, an array of whirling geometric shapes and hand-drawn projections comprise landscapes that are ever-mutating, as a raven flies about in its dreamy world.

Below, Pure Bathing Culture and Morris share details about the intention behind this track and video, as well as its mythological inspiration and technical details. 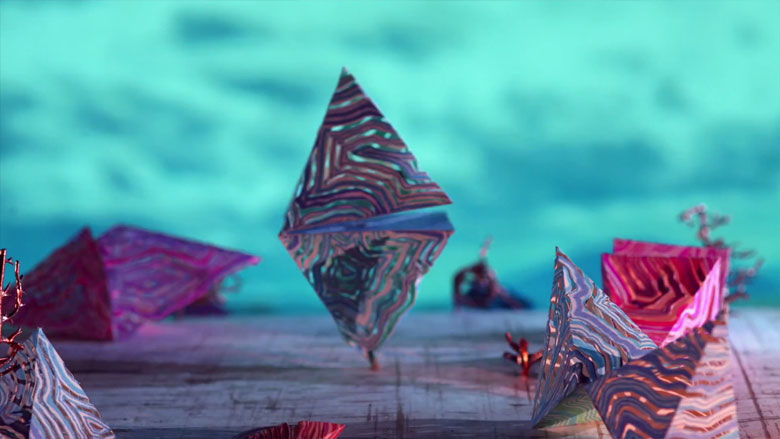 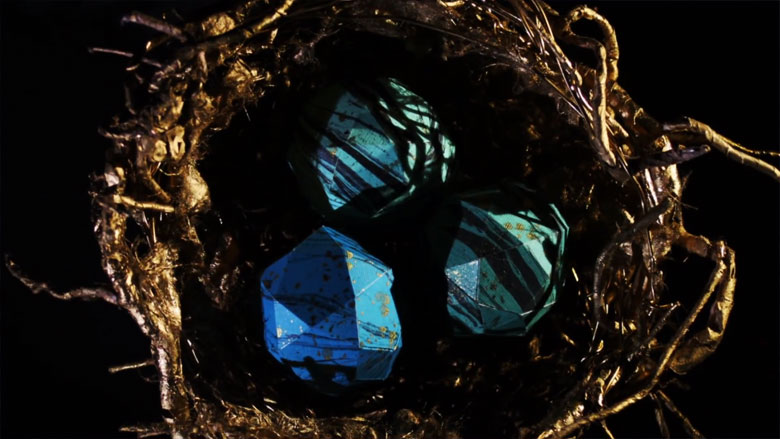 Dan and Sarah were fantastic to work with. They were drawn to the color palettes I use in my work and the dreamy and somewhat psychedelic imagery from my past videos. They were interested in having me bring this aesthetic into the “Dream the Dare” video. Dan and Sarah also felt that having a hopeful message was very important. From these initial guidelines I formed the idea and developed the style. Once I started production, the band trusted me to do my thing.

Our friend Sean Pecknold, who is an amazing director and animator as well — and who directed the video for our song “Ivory Coast” — shared Hayley’s amazing video for the Iron and Wine song “Joy” with us. It’s such a beautiful video. We immediately knew that we wanted to work with her. We had one initial conversation with Hayley where we shared a very rough stream of consciousness theme involving the crow, and she completely understood and took it from there. She was communicative about her ideas throughout the process, all of which we loved.

The imagery of the raven was chosen for this music video because of its mythological implications. How did it first come to mind as a focus, and how does that it fit in with the themes and the ideas of the song?

A raven and crow are mentioned throughout the song. The band suggested this symbol as a possible focus. Many mythologies depict the raven as the mediator between life and after-life, a traveler between worlds. Some cultures view the raven as a trickster, the creator of the world, a messenger, or the harbinger of good luck. My motivations were to employ this very loaded character as a muse — the creator and voyeur of my world(s).

When first listening to the song, I closed my eyes and imagined myself drifting through clouds. The song feels like a journey, and I worked intuitively more with the feeling I got from the song, rather than the actual lyrics. The music has a very airy and light sound, so I loved the idea of having a raven as the main character. Also, I really wanted to push myself, with the visuals by experimenting and being playful. I feel that trying to go into a bird’s mind was a really great challenge for me as an animator. I wanted to see how the bird would see the world, and this was a lot of fun to figure out in stop-motion.

For us as songwriters, the theme was really about calling for someone to transform and to have the courage to transform. Ravens and crows can symbolize the gatekeepers between worlds. We were inspired by this idea while writing the song. 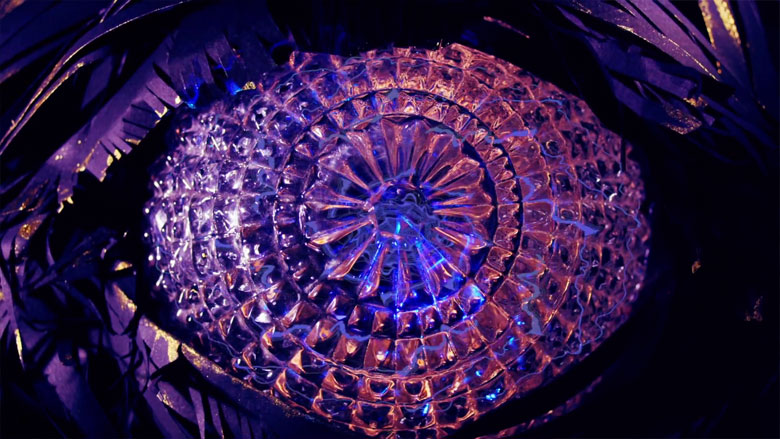 Are there other symbolic elements that come into play in this music video in the use of diamonds, eyes, etc.?

I wanted the raven to have a transformative quality through its shifting eye colors and reflections in the eye. The hand-drawn sequences of the bird were also influenced by Inuit design and printmaking, which are inherently spiritual. I was very inspired by their use of pattern and simple shapes. I wanted the overall look of the video to have the same sensibility, in the 3-D geometric and organic forms, as well as the hand-drawn images.

That particular lyric “diamond islands in your eyes, blackest in the sun” had less to do with symbolism and more to do with emotional psychedelic imagery.

How long did the creative process take, and how much did it change in concept from beginning to end?

The video took about 2.5 months to create from start to finish. There was about a month-and-a-half of building the set pieces and puppets and a month of animating. My process is a bit experimental and spontaneous, so the idea changed a little bit throughout production. Once you are in it, you come up with ideas and solutions for things that you hadn’t thought of in the beginning. It’s like a big puzzle, so it’s nice to improvise. For instance I had a completely different ending in mind, but the image of the golden nest came to me and I thought it would be a really beautiful and perfect ending.

The luminous elements are particularly useful in adding an extra oomph to glow of the video. How did the use of projections come to form, and how was it accomplished?

I wanted the viewer to see the world in a different way and wonder if the hypnotic patterns are of this world or how the Raven sees it. I have been playing with projections in my videos for the past few years. I like my work to push in camera techniques, and projection has allowed me to combine 2-D animations with 3-D in a natural way. My video for Iron and Wine’s song “Joy” used hand-painted watercolor projections that were very painterly and colorful. I wanted to try it in a different way for the” Dream the Dare” concept. I imagined geometric shapes and line work mingling with the landscapes through light. I also wanted these simple line drawings to take inspiration from Inuit art. I usually work completely by myself on my videos, but I thought it would be fun to combine my sculptures with a different artist. I contacted my friend Caleb Wood, who is an amazing 2-D animator and he created most of the hand-drawn glowing projections you see in the video. 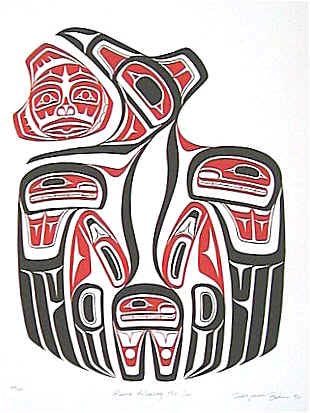 Picture of “Raven Releasing the Sun”, by Todd Baker 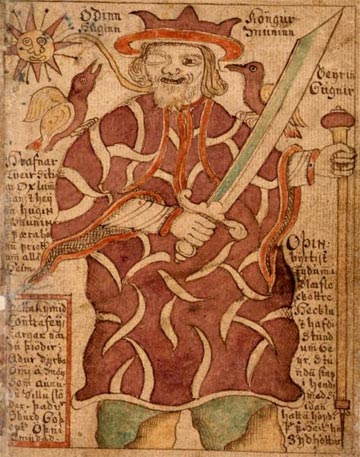 An illustration from an 18th-century Icelandic manuscript depicting Huginn and Muninn sitting on the shoulders of Odin.

Cultural Depictions of Crows and Ravens in Mythology

Ravens and crows have been a character in many mythological tales from around the world, primarily with early Europeans, native tribes, and religious groups. Below is a shortlist of notable references.

AUSTRALIA
In Aboriginal mythology, Crow is a trickster and ancestral being. Found in various groups around the country are tales about Crow and his role in the theft of fire, the origin of death, and the killing of Eagle’s sun.

BHUTAN
The raven is the national bird of Bhutan, where he dons a hat and represents one of the important guardian dieties of Buhatnese culture, Gonpo Jarodonchen. Gonpo Jarodonchen is essentially Mahakala — a protector of dharma in certain sects of Buddhism — but with a Raven’s head.

CHRISTIANITY
When fourth-century Iberian martyr Saint Vincent of Saragossa was executed, ravens protected his body from being devoured wild animals until his followers could recover his body. His body was taken to southern Portugal and eventually to Lisbon, accompanied by ravens the entire way, according to Arab geographer Al-Idrisi.

GERMANY
In legends about the German Emperor Frederick Barbarossa, he is sleeping along with his knights in caves, and is told that when ravens cease flying around the mountain he will awake and restore Germany to its ancient greatness. With the emperor’s eyes still half-closed in sleep, he now and then raises his hands and sends a boy out to see if the ravens have stopped flying.

ICELAND
In the Landnámabók — a story similar to Noah and the Ark — Hrafna-Flóki Vilgerðarson uses ravens to guide his ship from the Faroe Islands to Iceland.

IRELAND
Crows are associated with Morrigan, the goddess of war and death. After the hero Cú Chulainn dies, she descends and perches on his shoulder in the form of a raven.

ISLAM
In the Qur’an’s version of the story of Cain and Abel, the raven teaches Cain how to bury his brother after he murders him.

JUDAISM
In the Talmud, the raven is one of the three beings on Noah’s Ark that copulated during the flood and was thusly punished.

GREECE
In Greek mythology, ravens are associated with Apollo, the god of prophecy. They are a symbol of good luck, as the god’s messengers into the mortal world.

HINDUISM
The Hindu deity Shani is often represented as being mounted on a giant black raven or crow, which is Shani’s Vahana, or mounted animal vehicle.

RUSSIA
In the Russian Far East, the raven god or spirit is a key figure in creation, a fertile ancestor of mankind, a mighty shaman, and a trickster.

SCANDINAVIA
In Norse mythology, Odin is often associated with ravens. Two ravens, Huginn and Muninn — representing thought and memoryrespectively — are his “eyes” and “ears”; they daily travel the world to bring back news to Odin.

UNITED STATES
Ravens are referenced often by indigenous tribes throughout the Pacific Northwest, where he is considered the Creator of the world as well as a trickster god. The exact tales, however, vary from culture to culture.

WALES
The god Bran the Blessed, whose name means “Blessed Raven” is associated with corvids and death. His head is said to be buried under the Tower of London as a talisman against invasion — which may have been an influence on the ravens which inhabit the Tower of London today. According to legend, England will fall if its ravens are removed, and their presence remains to this day.

Pure Bathing Culture‘s latest record, Moon Tides, is out now on Partisan Records.
Read our review or purchase the record on Amazon.