The “blind bluesman” is perhaps the dominant image of the genre, and one that evokes a number of associations. As noted by scholar Joesph Witek, the idea of the “blind genius” dates at least as far back as Homer. Given that many of these musicians were extraordinarily talented, their blindness might have fed popular interest in their music. However, blindness was almpso a debilitating condition for many of these men, especially in the rural South, so that the blind musician occupied a place of pity in the public mentality.

Economic necessity is probably the most compelling argument for the relatively large number of blind blues musicians. Most African-Americans living in the South had few other possible careers outside of manual labor, and playing music was one of the few options left to a blind man. Even the schools for the blind offered musical education as part of their curriculum, and several musicians got their start in schools. Record companies were quick to play up the fact that their musicians were blind and the suffering that their condition brought them. Paramount Records’ Book of the Blues, in its biography for Blind Lemon Jefferson, wrote “Can anyone imagine a more horrible fate than to find that one is blind?”

But as writer Luigi Monge also points out, blindness also gave these musicians a certain degree of musical freedom. Cultural taboos barred most musicians from mixing gospel songs with secular songs. Blind musicians could skirt this barrier by virtue of their handicap; because they were playing music to make ends meet and had no other recourse, they could operate with relative immunity. As blind musicians often acted as mentors to young musicians, this fed the diffusion of the two genres into popular music. 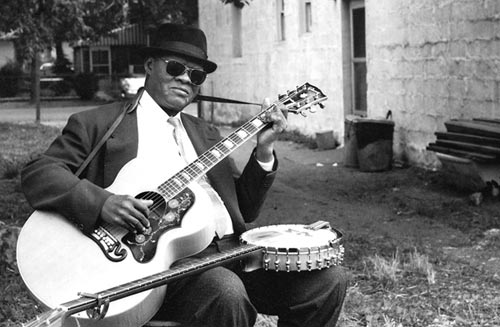 Blind Gary Davis, also known as the Reverend Gary Davis, is one musician who captures the sacred aspect of the blues. Born in 1896 in South Carolina, he was one of eight children and became blind as an infant. He moved to Durham, North Carolina in the 1920s and became a street musician in what a burgeoning center of black culture in the South. In those years, record store owners often doubled as talent scouts, and Davis was discovered by a now-famous scout named J.B. Long in 1935. Gary Davis played in what is known as the Piedmont Style, which was a heavily syncopated fingerpicking that sounds akin to ragtime.

In 1937, Gary Davis found religion and was ordained as a Baptist minister. From then on, the music he played was predominantly gospel, though he sometimes revisited his secular songs for white audiences. In 1940, Davis moved to Harlem, where he lived for the remainder of his life. Unlike many of his contemporaries, he never stopped making music, though his audience was now largely middle-class and white. He was renowned as one of the best guitar teachers in Harlem, offering advice to several future rock and folk stars, including Dave Bromberg, Taj Mahal and Jorma Kaukonen.

Davis was a phenomenal guitar player with a powerful voice, and there are numerous tracks of his music worth checking out. “If I Had My Way” is one of those blues songs that was adopted by folkies and then rock musicians, and listening to Davis, one can understand why: Davis’ shouts and hollers combine well with his nimble fingerpicking. “Death Don’t Have No Mercy” is a darker song but still showcases so much of what made Davis memorable. Finally, “Cocaine Blues” is one of his most famous secular songs.1

[audio:/mp3/Reverend-Gary-Davis_If-I-Had-My-Way.mp3|titles=Blind Gary Davis – If I Had My Way] 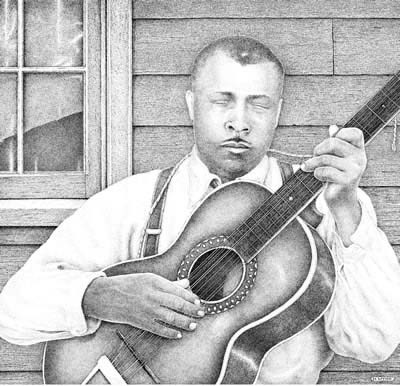 Blind Willie McTell was an Atlanta-based bluesmen who was active from the 1920s until his death in 1959. McTell lost his vision progressively throughout his childhood and was educated in schools for the blind, where he learned to play instruments and was taught Braille. Family members taught him to play guitar while living in Georgia, and he eventually adopted the twelve-string guitar, an uncommon instrument among blues musicians. Using the twelve-string, McTell was able to put a unique spin on the Piedmont blues style that was in fashion on the East Coast. McTell began recording in 1927 and sold well through the Great Depression (though this did not bring him great material comfort). After WWII, his recordings were less successful. His last recorded session was done on a tape recorder for a record store owner in 1956. McTell died three years later from a stroke.

McTell exerted an enormous influence on later white musicians. Bob Dylan has paid tribute to McTell in several songs, and The White Stripes dedicated De Stijl to McTell in addition to covering two of his songs. “Delia” is one of my very favorite McTell songs (in addition to Bob Dylan’s cover), so I’ll present that here. “Southern Can is Mine” is a song that has been endlessly covered by subsequent rock musicians, so enjoy it in its original form. McTell’s postwar output is ignored by some, which I think is an oversight. In light of that, enjoy “Don’t Forget It,” done by McTell and his friend Curley Weaver.2

Blind Willie McTell – “Southern Can Is Mine”

[audio:/mp3/Blind-Willie-McTell_Southern-Can-Is-Mine.mp3|titles=Blind Willie McTell – Southern Can Is Mine] 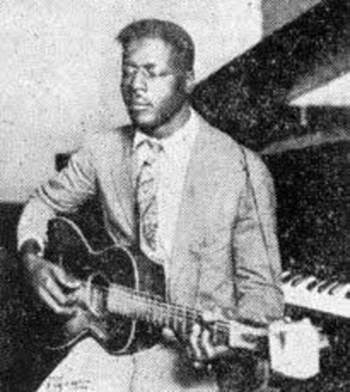 Blind Willie Johnson is another musician-preacher on this list, though his style is vastly different from that of Gary Davis. No firm reason for his blindness has ever been established; the most popular legend is that his stepmother, angry over her husband’s infidelities, threw lye in Willie’s face and destroyed his eyes. It seems that Johnson spent most of his life in Texas, where he was born, and first began recording for Columbia Records. Between 1927 and 1930, he recorded thirty songs, sometimes accompanied by his wife. Like many other bluesmen, his recording career was ended by the Great Depression, and he spent the remainder of his life as a preacher in Beaumont, Texas. In 1945, his house burned down, and he slept in the ruins until he contracted malaria and died.

Johnson alternated between a fingerpicking style and slide guitar while singing in a gravelly and powerful voice. Most of his works were spiritual in nature. “Dark was the Night, Cold was the Ground” was selected as part of the Voyager Golden Record signifying mankind’s greatest accomplishments. “Let Your Light Shine on Me” and “Jesus Make Up My Dying Bed” are two of my favorites, the latter being adapted by several folk and rock acts in the ‘60s and ‘70s.3

Blind Willie Johnson – “Dark Was The Night, Cold Was The Ground”

[audio:/mp3/Blind-Willie-Johnson_Dark-Was-The-Night.mp3|titles=Blind Willie Johnson – Dark Was The Night, Cold Was The Ground]

Blind Willie Johnson – “Let Your Light Shine On Me”

[audio:/mp3/Blind-Willie-Johnson_Let-Your-Light-Shine-On-Me.mp3|titles=Blind Willie Johnson – Let Your Light Shine On Me] 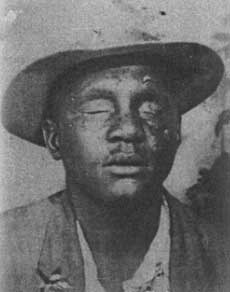 Blind Joe Reynolds is the next person on my list, though neither me nor anybody else has a lot of firm evidence for much of his life. Everything we know about Blind Willie Reynolds was what researchers were able to piece together after he died. Even his name is in dispute, as he went by Joe Sheppard, Joe Leonard, and Joe Reynolds, as well as Willie Reynolds in his releases for Paramount. His recorded output amounts to less than twenty minutes of sound, yet he was well-known by many of his contemporaries and his songs are notable for his proficiency on the guitar as well as their dark content.

The best picture that emerges of Reynolds is of a man who liked to build an image of himself as a bad man and a womanizer. Family members say he was born in Louisiana, though his death certificate listed Arkansas. He was supposedly blinded by a shotgun blast to the face, which I wasn’t aware was something that a person could survive. In 1929, Reynolds was scouted by H.C. Speir and recorded four songs for Paramount Records. In 1930, he recorded another four songs, though only two of these were released. After this, he became a largely itinerant musician, though his style changed through the decades when he changed over to an electric guitar. Local legends spread about his “badness”, including tales about his living with two women as well as his notorious drinking habits. He continued touring and playing in the South until he passed away in 1968. As Gayle Wardlow noted, he was probably one of the last if not the last of the pre-war minstrels still playing in the way he always had.

I’ll include three of Reynold’s Paramount releases: “Cold Woman Blues”, “Nehi Blues”, and “Outside Woman Blues”. The last song was made famous by the band Cream, though it’s doubtful that Reynolds was ever aware of this. It’s worth saying that Reynolds’ lyrical content is offensive and not infrequently misogynistic. I wouldn’t try to excuse the content of his songs, but I do find the creation of a “bad” persona to be interesting. 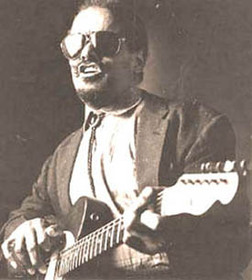 The last blind musician on my list is a New Orleans musician, Snooks Eaglin. Born in 1934, Snooks lost his sight at the age of one, due to glaucoma. He father gave him a guitar, which he learned to play by listening to the radio. He briefly attended a school for the blind but dropped when he was 14, becoming a musician in New Orleans instead. He was first recorded playing folk songs in 1958, by Harry Oster – but Eaglin was best known for playing electric R&B with other New Orleans musicians. His style was nothing if not eclectic, and he moved between jazz, blues, Latin songs and pop tunes. He also boasted of knowing several thousand songs. He died in 2009 on the eve of further comeback performances and was widely celebrated in his home town.

Unfortunately for the listener, he recorded somewhat sporadically, often going years at a time without recording new songs. He did, however, consistently perform in his home town, and he was a beloved figure in New Orleans music. I first discovered Eaglin through the Harry Oster recordings, and as they feature many New Orleans classics, I’ll include one of my favorite songs, “Careless Love”. “Mama, Don’t Tear My Clothes” is another favorite, and “See See Rider” is a staple of blues music.

Nice piece. I hope you’ll consider a follow-up on some of the greats you didn’t include here: Blind Blake, perhaps the greatest guitarist of all; Blind Boy Fuller, Sonny Terry, Roosevelt Graves; and a couple of greats who went blind later in life-Bo Carter and Sleepy John Estes. There are a lot more.
Some, like Fuller, managed to capitalize on that weird paternalistic side of Jim Crow. Fuller was given a license to perform on the street, and not subject to harassment from the police.

Ha, yeah, when it comes to blind musicians I have a lot of ground to cover. I limit to 5 musicians a mix, which means I have to be really economical.