Judy Nelson10 min readJune 6, 20161 comment
With each passing year, Northside Festival ups the ante, taking over more northern Brooklyn venues and gaining more and more international recognition. Now in its 8th year, the festival added their Innovation track a few years back, which seems like a smart move considering that the tech industry conference economy is booming. Yet Northside’s backbone will always be its music portion, and this year they have outdone themselves. They have a spectacular lineup of shows at Williamsburg’s McCarren Park, including the return of indie darlings Wolf Parade, who are back with a new studio album after a multi-year hiatus. The lineup also includes the legendarily reclusive Brian Wilson, who is closing the McCarren series, as well as hip hop all-star Grandmaster Flash. Excitement has been building since the slow trickle of announcements over the past few months, and next week, we’ll finally be able to live out the hype — with hopefully no rainstorms this year! Below are a few of our top picks during this four-day music festival, which include Grandmaster Flash, Grouper, Peanut Butter Wolf, Oddisee, TEEN, Crown Larks, and more. 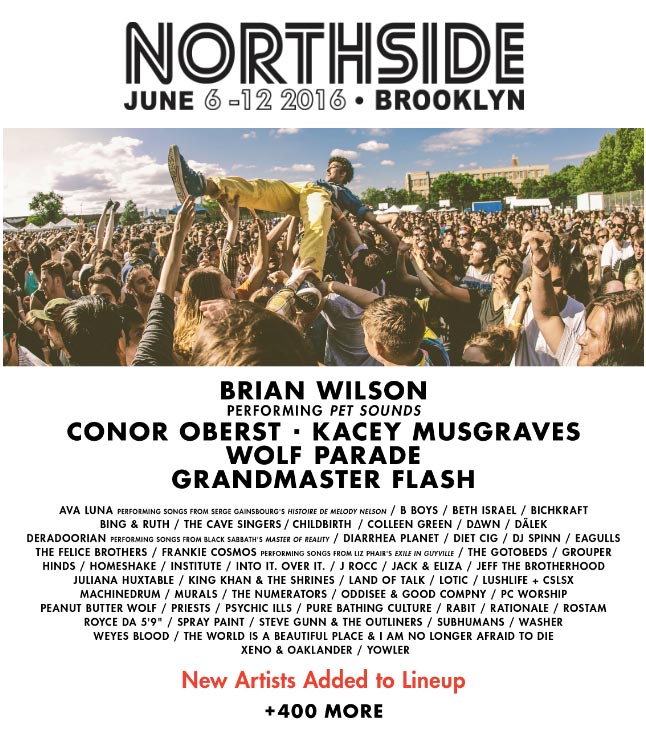 9:30PM @ UNION POOL (484 UNION AVE., BROOKLYN, NY 11211)
Since we saw them play a showcase at Le Poisson Rouge for last year’s CMJ Music Marathon, TEEN have been highlighted as far and wide as NPR, BBC Radio, and beyond. Released this past February on Carpark Records, the band’s latest album, Love Yes, ties together a modern marriage of ’80s new wave and ’90s R&B with eloquent, empathetic lyrical studies. This hometown show for the three Lieberson sisters (leader Kristina “Teeny” Lieberson, keyboardist Lizzie, and drummer Katherine) and bassist Boshra Al-Saadi will be a chance to catch them in a more intimate Brooklyn venue before they play with Wye Oak at Warsaw later in the month. – Ian King

10:40PM @ AVIV (496 MORGAN AVE., BROOKLYN, NY 11222)
After releasing a celebrated fourth studio album last year called Comb the Feelings Through Your Hair on Western Vinyl, Brooklyn-based Grooms did not waste any time getting back on the horse. Their fifth is currently in process as we speak. We reviewed their third studio album, Proms, back in 2011. Since then, their style has progressed and matured, but they’ve kept their basic indie rock elements. Check them out with Crown Larks, Zula, Yonatan Gat and more at the Gimme Tinnitus showcase on Thursday night. – Judy Nelson

11:20PM @ AVIV (496 MORGAN AVE., BROOKLYN, NY 11222)
Crown Larks’ Blood Dancer was deemed by yours truly to be one of the best albums released last year. The Chicago psych rock abstractionists have been touring back and forth across the US pretty heavily this spring, and they return on the first night of the festival to Aviv in Brooklyn, joining a deep line-up that includes Yonatan Gat and Grooms, among others.– Ian King

9:00PM @ GRAND VICTORY (245 GRAND ST., BROOKLYN, NY 11211)
New York DJ Baby Dayliner has been quiet since releasing two excellent dance-pop albums in the early 2000s. The last of his two albums, Critics Pass Away, has continued to remain relevant in my record collection for the past 10 years, which is no small feat considering the wave of indie musical trends that ensued from 2000-2016. It helps that his strong vocal style, a classic cabaret, carries each of the songs into a familiar place. For the past decade, Baby Dayliner has been DJing clubs like Pianos and guesting on other musicians albums. Catch him during Northside in a rare performance — not to be missed! – Judy Nelson

TIME TBD @ BROOKLYN BOWL (61 WYTHE AVE., BROOKLYN, NY 11249)
As a popular DJ and remixer who came to prominence in the late ’90s/early aughts era of J.Dilla and Madlib, it was a pleasant surprise to see Peanut Butter Wolf on the schedule of such a typically indie rock-heavy festival. Kudos to the Northside organizers for diversifying the lineup even more than in past years. PBW is a prolific recorder; he has released over nine albums with his own label, Stones Throw records, as well as a good catalog on other labels. While he doesn’t tour as frequently in the past few years, when he does appear live it is quite the experience. This stop is part of a larger tour with labelmates J.Rocc, Mndsgn, and Samiyam! – Judy Nelson

11:15PM @ UNION POOL (484 UNION AVE., BROOKLYN, NY 11211)
Spray Paint, an Austin trio who trade in wry, caustic punk, released two albums last year. Punters on a Barge came out that June on the Australian label Homeless, and Dopers followed soon thereafter, when Monofonus Press put it out in October. That work ethic extends to touring, as they have been playing shows nearly every night since May 18th, and this very worthwhile gig at Union Pool — also featuring Kid Millions & Jim Sauter and Beech Creeps, among others – will mark the end of a hectic month for the band. – ian-king

12:30AM @ BABY’S ALL RIGHT (146 BROADWAY, BROOKLYN, NY 11211)
The world never seems to tire of punk-influenced riot grrl rock, and this continues to influence legions of fans who perhaps have never even heard of Bikini Kill. While the lyrical themes might change depending on current events (see their song “Siri, Open Tinder”) there are still overarching, empowering moments. CHILDBIRTH’s newest album, Women’s Rights is full of those, and a wealth of other provocative moments. This should definitely be a high-energy show, even for those of us who can barely imagine starting their night at 10pm, let alone 12:30am. The rest of the line up at this event is to die for, so be sure to catch this one! – Judy Nelson

7:30PM @ NATIONAL SAWDUST (80 N 6TH ST., BROOKLYN, NY 11249)
As a member of Saintseneca and the singer/guitarist for All Dogs, Maryn Jones is active in two well-regarded Columbus, Ohio, bands. Somewhere in there she also finds time for Yowler, her acoustic, introspective, reverb-washed solo project. Opening here for Grouper, the pairing is a natural fit for the hushed atmospheric songs found on Yowler’s debut, The Offer. – ian-king

8:30PM & 11:30PM @ NATIONAL SAWDUST (80 N 6TH ST., BROOKLYN, NY 11249)
Grouper is the stage name for Portland-based musician Liz Harris, who has been releasing minimalist records from the left coast for over a decade. As her albums and tours started trickling to this coast in the last five-plus years, she has become a critical darling, and rightly so: her sound is a barebones, methodical style that is all her own. This date will be a nice experience of seeing her in a small venue, capturing that sense of intimacy that she creates on her records. – Judy Nelson

11:00PM @ THE GUTTER (200 N 14TH ST., BROOKLYN, NY 11211)
The name Crazy Pills is quite misleading for a jangly pop band that sounds more lively and fun than dark and psychotic. Crazy Pills is a self-proclaimed “garage pop” band from that cites girl rock influences such as Dum Dum Girls, and then hops over to The Pretenders to pay homage to the ’80s. They’re a relatively young band, having formed in 2010. So far, they have released one record called Restless, and it is aptly titled. They will headline a bill with Gland, The Fucktons, and Psychiatric Metaphors. If you happen to fall in love with their live show, they’ll be playing again the next night, at the Gutter again! – Judy Nelson

9:15PM @ SHEA STADIUM (20 MEADOW ST., BROOKLYN, NY 11206)
Loitering right outside the diamond in Silver Spring, Maryland, Two Inch Astronaut are keepers of the flame for the sound of DC in the ’90s. Personal Life, their third and most recent album, and Foulbrood before it in 2014, expertly synthesize the style and spirit of Jawbox, Shudder to Think, and other bands from that specific time and place. None other than J. Robbins (Jawbox, Burning Airlines) himself produced Personal Life, effectively welcoming the young band into the fold. – ian-king

9:30PM @ BROOKLYN BOWL (61 WYTHE AVE., BROOKLYN, NY 11249)
Another well-known DJ hits the stage during Northside, but this one has a bit of a different spin on life. Raised in Washington DC, Oddisee draws much inspiration from his hometown. This is especially highlighted in his second widely released instrumental mixtape, Rock Creek Park, which received a pile of media accolades. The album so smoothly blends R&B, soul, and hip-hop, that it seems almost effortless. Since then, he has continued to release mixtapes, as well as collaborate with other MCs and DJs, including Cy Young and even DJ Jazzy Jeff. His most recent official album, The Good Fight, came out last year on Mello Music Group, and this year, he released another mixtape called The Odd Tape, which has received a ton of critical praise. He’s been touring around the country for the past month; catch him on this stop with his crew GOOD COMPNY at Brooklyn Bowl. – Judy Nelson

A Deer A Horse

9:30PM @ MUCHMORE’S (2 HAVEMEYER ST., BROOKLYN, NY 11211)
We caught A Deer A Horse at an afternoon show at Bar Matchless during last year’s Northside, and we’re looking forward to them again this year. The commanding garage-punk trio of singer/guitarist Rebecca Satellite, bassist Angela Phillips, and drummer Sam Monaco will be holding up the middle of an eight-band lineup at Muchmore’s on Northside’s final night. – Ian King

9:45PM @ ALPHAVILLE (140 WILSON AVE., BROOKLYN, NY 11237)
Ukrainian band Bichkraft doesn’t want to take your questions about the political situation in their home country. They just want to PLAY, and play they will. Their songs have a heavy beat, reminiscent of industrial music with a twinge of electronic. There is a sense of intensity and urgency in their newest album Mascot, and also a sense of oppression, which one might be considered natural in a country distraught by war and extremely cold the majority of the year. We hope that Williamsburg and the Northside festival will provide the band with a sense of relief and an escape from what sounds like a challenging reality. – Judy Nelson

10:15PM @ BABY’S ALL RIGHT (146 BROADWAY, BROOKLYN, NY 11211)
Murals’ debut album can be filed under “Some Things are Worth the Wait”. Finally seeing the light this past February, Violet City Lantern arrived nearly ten years after the members started playing together in high school. Befittingly, the album floats above any particular time or place, a summer’s kiss of gentle West Coast psychedelic pop dreamt from a hillside in Louisville, Kentucky. – Ian King

[…] Listed on Bedford & Bowery and Unrecorded and Redefine Mag! […]