In a powerhouse collaboration between Portland musician Dolphin Midwives and interdisciplinary visual artist aesthetic.stalemate, the music video for “Break” comes from Fisher’s forthcoming record, Body of Water, which explores healing the self and the environment from systems of abuse. Tying Puritanical references with digital rendering and 3D motion capture technologies, the universe created in “Break” feels just as timeless as the endless quest for betterment.
In the following Q&A, Dolphin Midwives’ Sage Fisher and aesthetic.stalemate’s Matt Henderson speak to their long-term creative exchanges and the singular environment they generated together.
Body of Water will be released July 9th. 2021 on Portland-based label, Beacon Sound.

What are the concepts or themes which anchored this piece?

Sage Fisher (Dolphin Midwives): The song was inspired by a sound art installation I created in Dec 2019, about breaking ties with cycles of abuse in our relationships with nature, within our social structures, within interpersonal relationships, and within ourselves. The installation featured four femmes, chained at the ankle, kneeing around a mirror in the center of the space. There was a sound collage of shattering glass, cracking ice, and melting glaciers to create an atmosphere of immediacy, urgency and transformation, which evolved into a digital drum kit which is featured in this track. Every 15 minutes, we would stand up and walk to the edges of the room and break plates, and recite the poem that would later become the lyrics to this song. 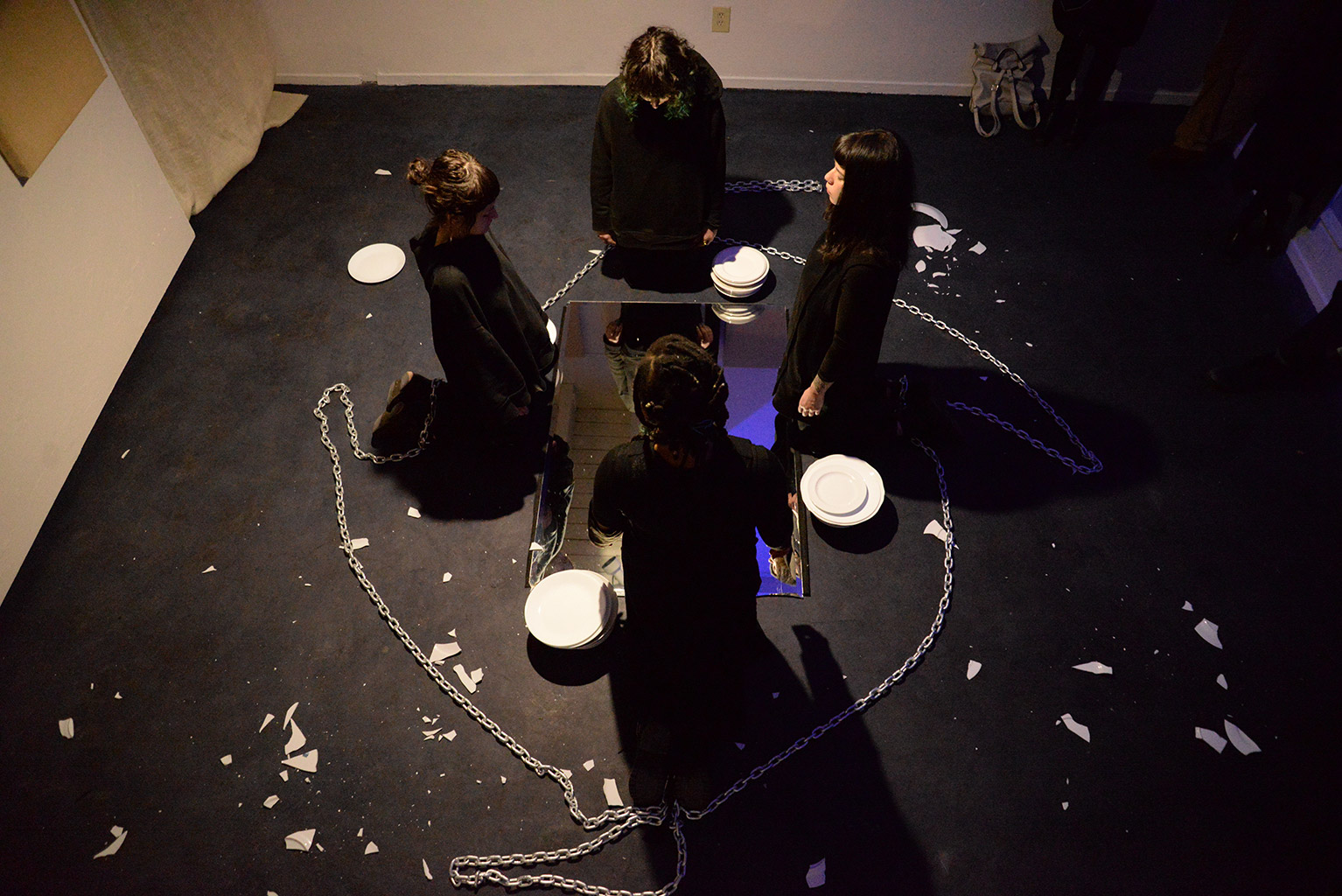 Matt Henderson (aesthetic.stalemate): When I heard the track, the imagery of breaking and shattering dishes was one of the first things that came to mind. At the time, I didn’t realize it was inspired by the original installation and breaking plates. Memory is strange like that. Knowing Sage personally and having witnessed some of her interpersonal travails, the breaking and shattering seemed like a way of externalizing a lot of that turmoil. I wanted to show her firm amidst her challenges, but also highlight the underlying sorrow. 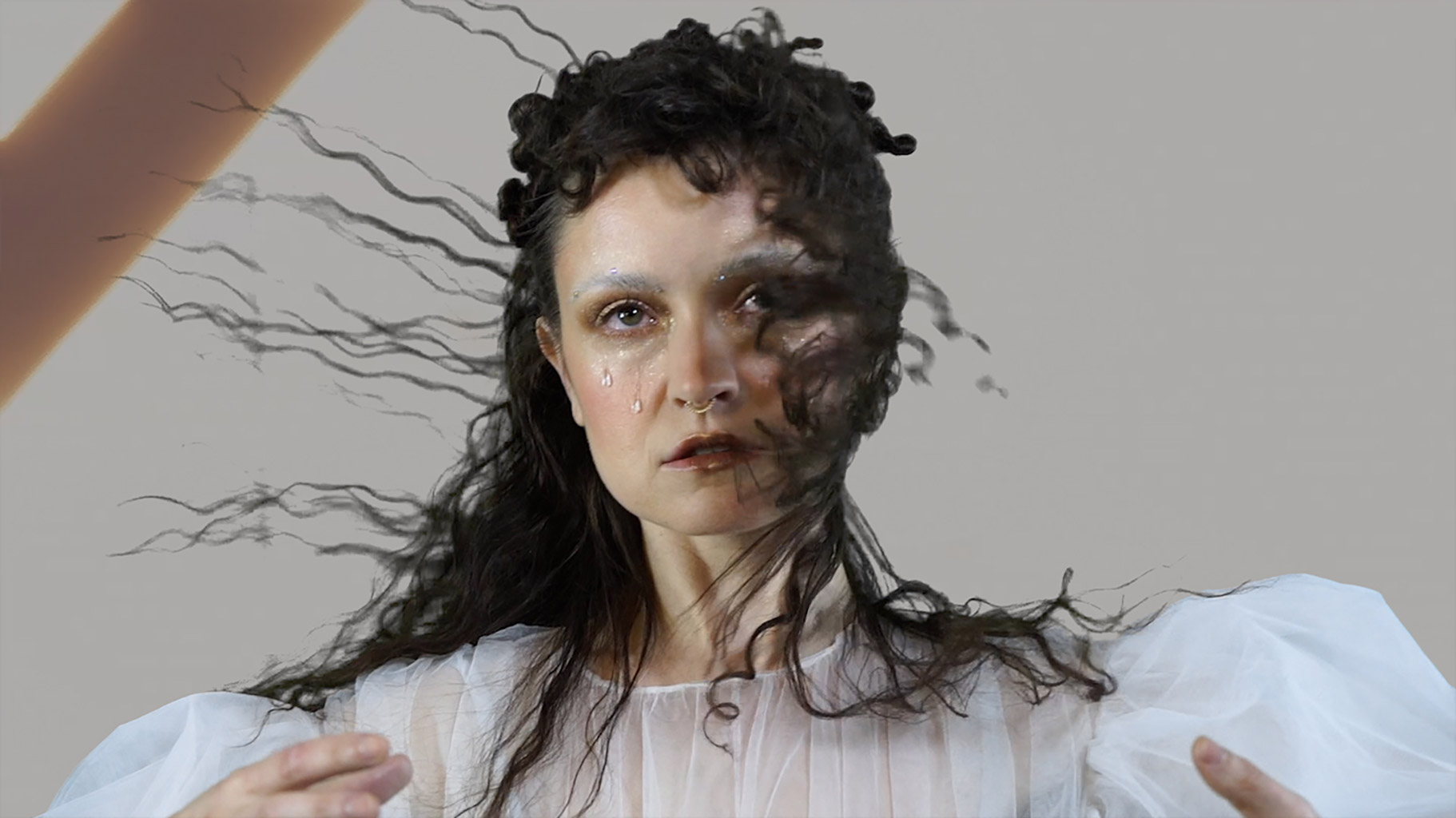 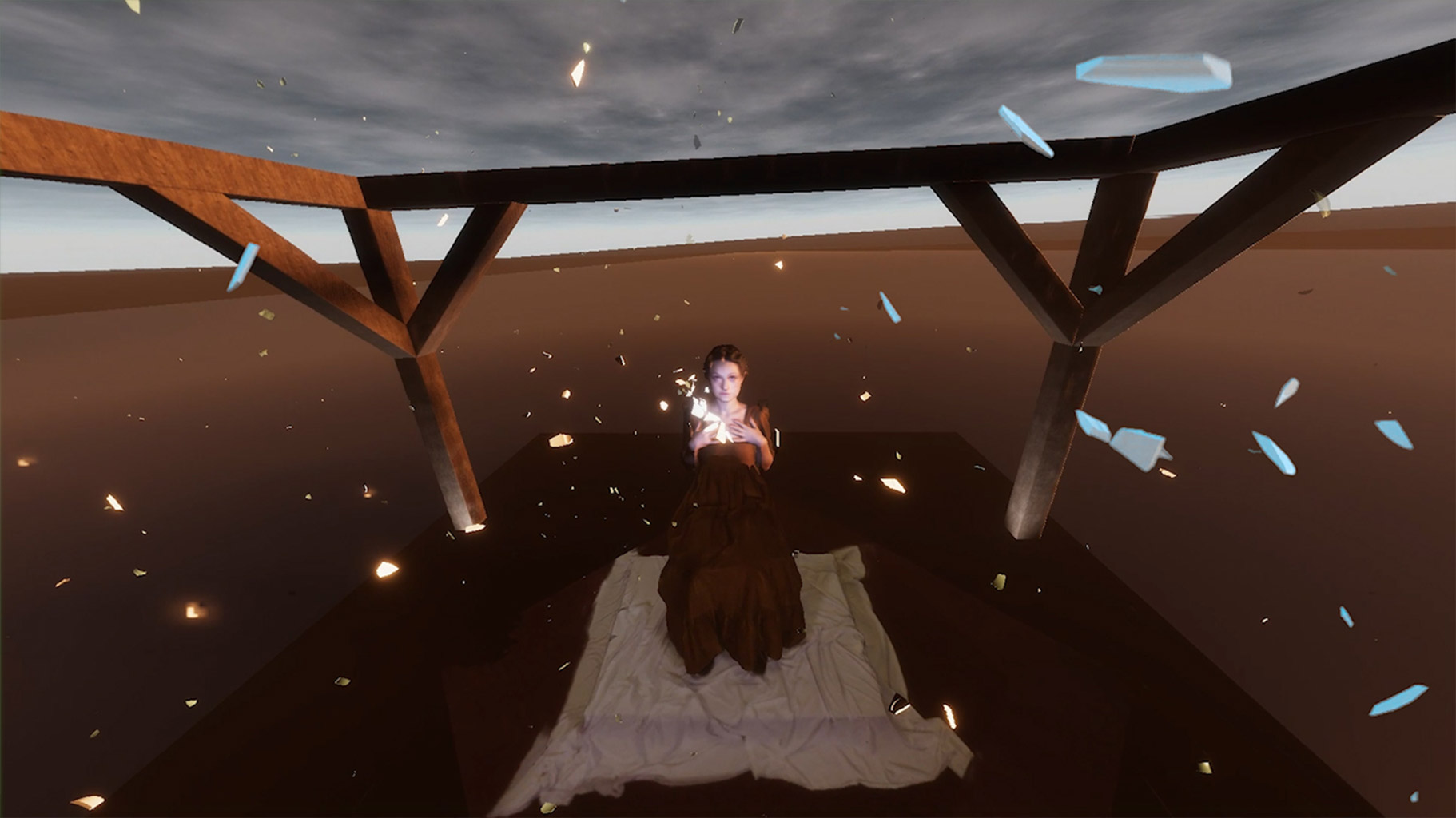 The aesthetic, given its styling choices and rendering technologies, feels as though it is hard to place within any specific timestate. What sources did you draw from to achieve this, and why?

Matt Henderson (aesthetic.stalemate): I like working with new technologies and the new possibilities they present. Unexpected results tend to arise from these experiments. We used a 3-D scanner, in-home virtual production techniques using a green screen, and employed two VFX specialists (J Bills, Sonya Neunzert) to render the breaking dishes at a high fidelity. Aspiring for polished realism, we ended up somewhere in between, contributing to an uncanny discontinuity of time and space.

Sage Fisher (Dolphin Midwives): For the first section, both Matt and I independently envisioned a rustic context with Puritan-esque costumes. The idea was to have me going about quotidian tasks, doing the mundane chores that life requires. I don’t know why we both came to that vision — possibly because it was pre-industrial revolution, which signaled a sort of slow apocalypse. We thought the rustic, Puritan world would contrast in interesting ways with the rendered environments and digital processing. The song itself is sort of a glitchy prayer, and the video conveys that humble, simplistic aspect of prayer, the fierceness of facing and grace of overcoming a shitstorm, and the glitchiness that gives the song it’s unsettling edge.

Can you walk us through the process, from pre-production and production to post-production? How much time was spent in each phase?

Matt Henderson (aesthetic.stalemate): Wow. Okay so we originally discussed the ideas for the video and easily united on a page about the ideas behind the song and representing them visually. I came up with a storyboard and shot list; Sage found costumes and dishes and hired Stormy B. Daniels to do her hair and makeup. I hired Clamber to direct photography because I like the polished look she produces and always love working with her. On the night before the shoot, I made some props incorporating green fabric into the antique mirror and the kitchen sink I sourced from a salvage yard. We did the entire shoot in one day — about 11 hours. Then the real fun began: sifting through the footage and creating some virtual environments in Unity (video game software) to serve as the backdrop / set where the video takes place.

While I had originally planned for a more elaborate virtual set, we settled on a simple barn-like formation with wooden rafters, rustic floor, etc. Then I overlaid the best of the live-action footage amidst the virtual environment and set up camera movements within the software. Sonya made breakable dishes (3D modeled in Blender) that I then used to shatter and film with in Unity. She used the same dishes to produce renders of plates breaking out of Blender that we handed off to J Bills who did the final compositing in an industry-grade software called Nuke.

Oh, and in the final days leading up to completing the video, I 3D scanned Sage with an iPad + 3D scanner accessory. The whole thing was a process and learning experience. I’m grateful to everyone involved: Sage, Clamber, Stormy, Sonya, J Bills, Andrew (Beacon Sound), Ben (who assisted on set), and my neighbor Ry who let us film at his dining room table. 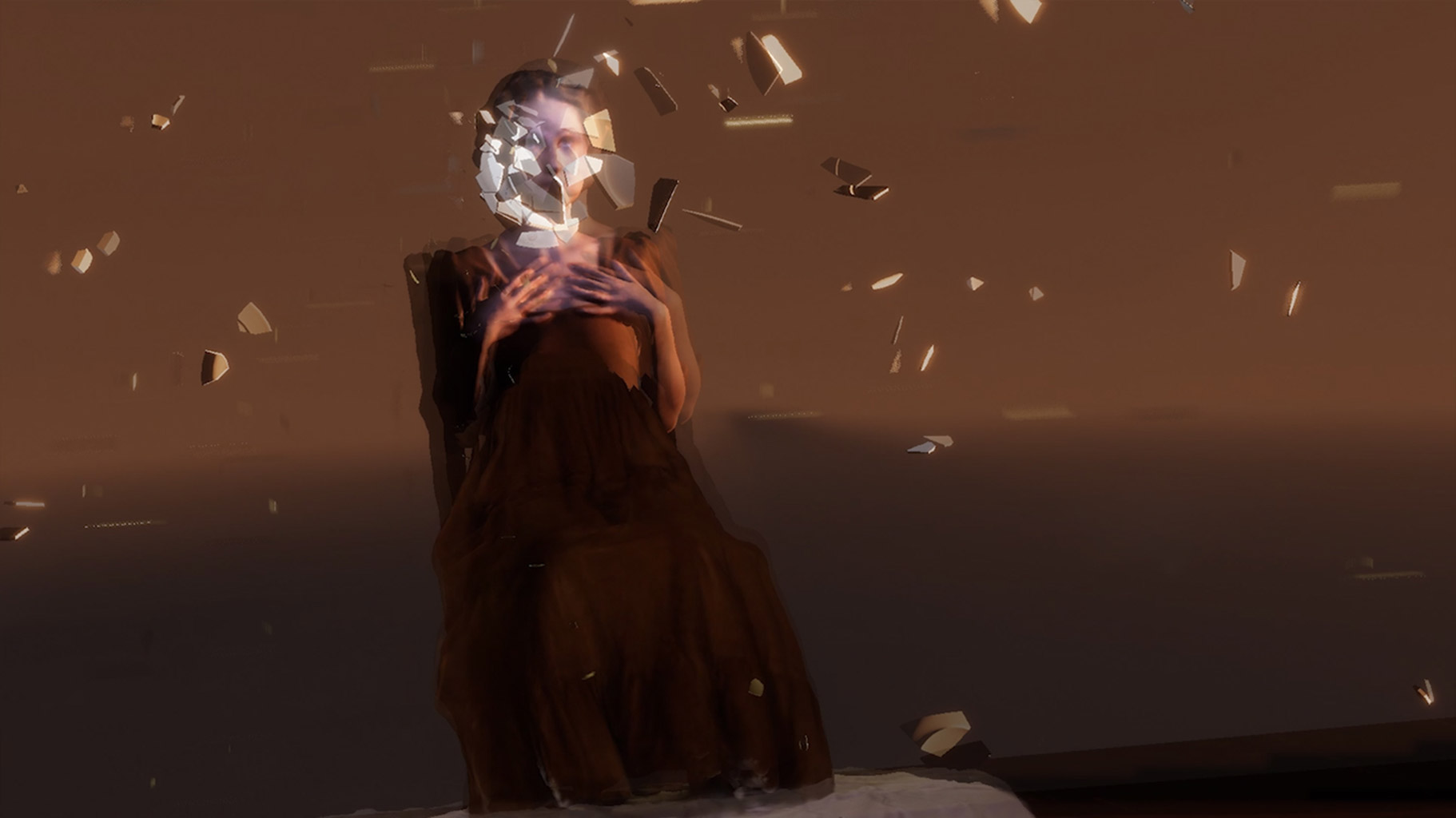 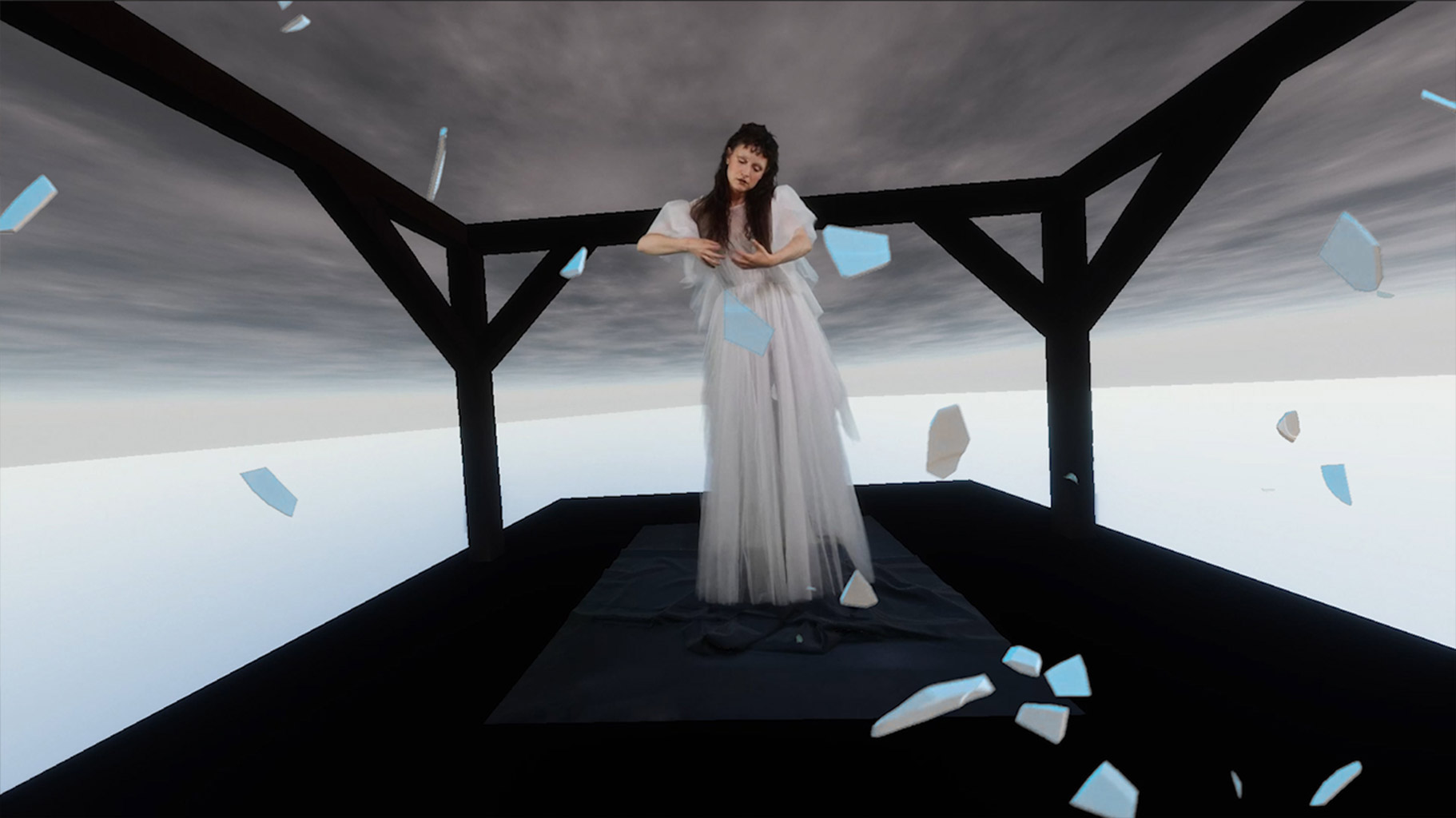 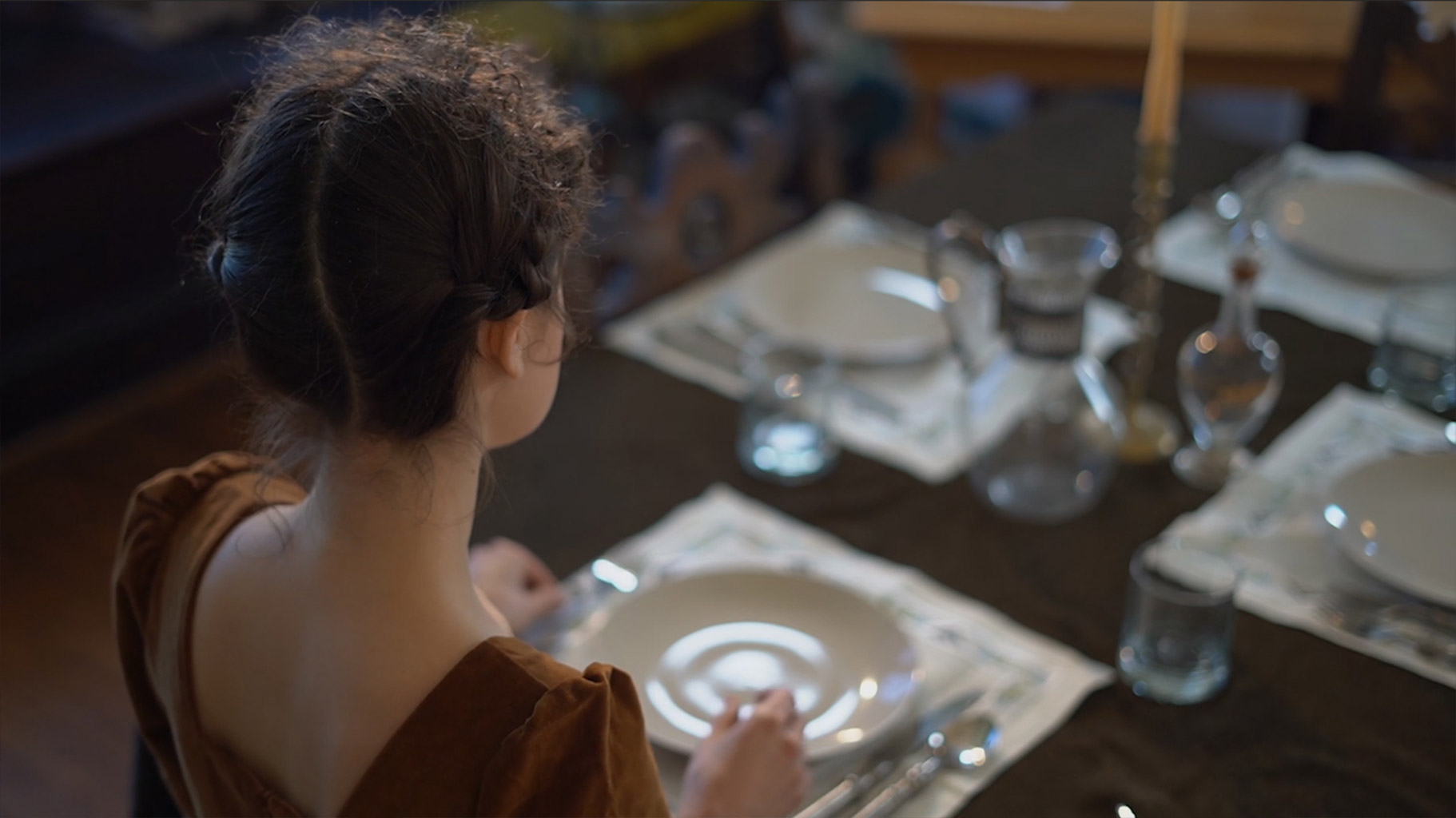 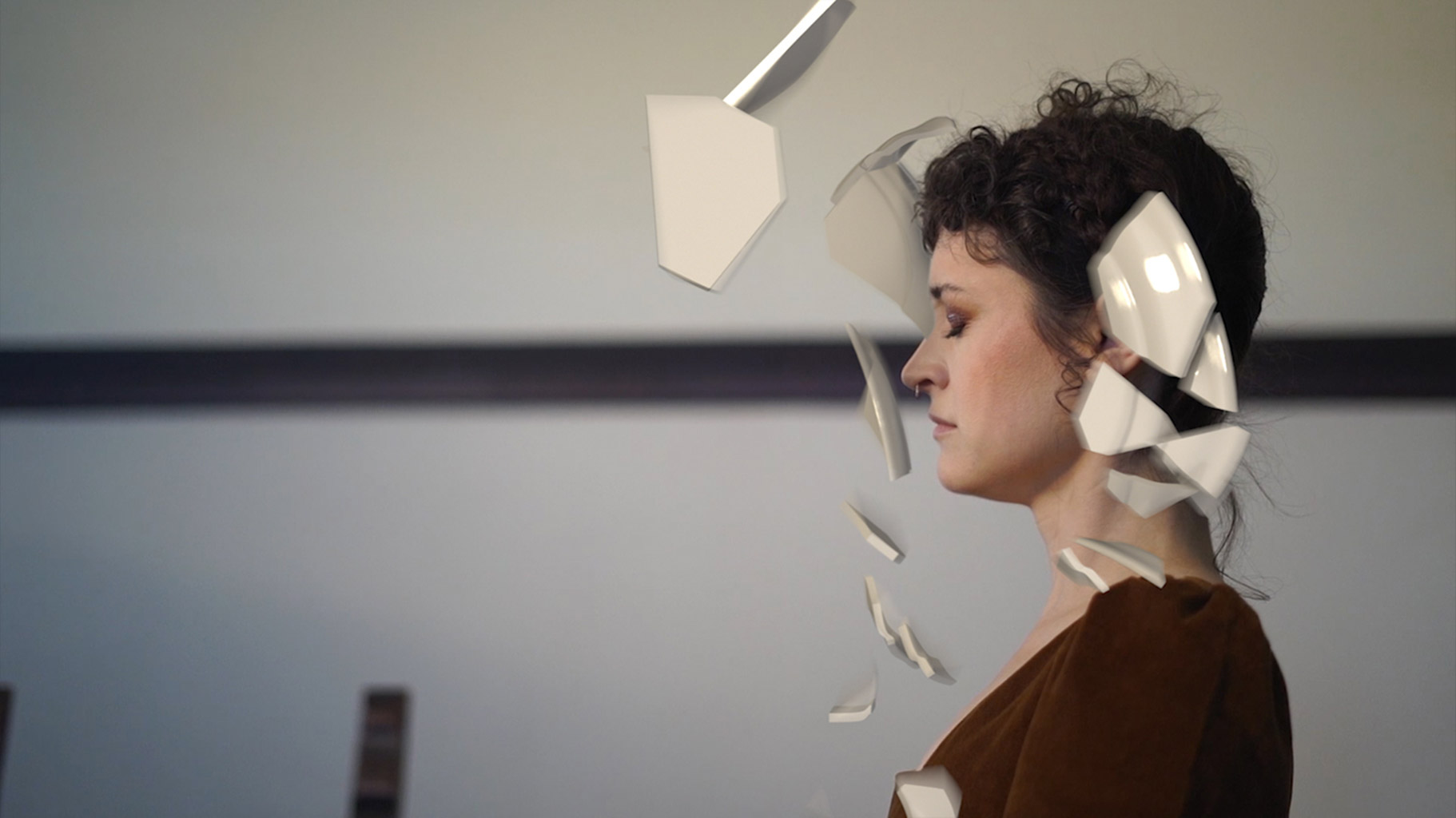 The plates are a huge component, especially with its breakage upon the face. Why were they incorporated as such a centerpiece item, and how did you pull it off?

Matt Henderson (aesthetic.stalemate): The visceral quality of plates smashing over a person’s body, while unsettling, is a metaphor that I thought would be easily interpreted. Everyone endures some level of trauma, or has simply been through some shit. Many suffer in silence. I just wanted to put that on display, as a reminder that no one is alone in feeling those feelings. Even just to survive in our present context seems to require a certain amount of grit or resolve. The track to me is a reminder that everyone is subject to their own set of circumstances and entitled to their own pain.

Can you give us an example of a couple of your other precious collaborations? How does this build upon that trajectory? Where else can we expect it to go?

Matt Henderson (aesthetic.stalemate): Three years ago, Sage asked me to collaborate for an A/V performance, and I made a whole virtual labyrinth for one of her performances. Since then, we’ve collaborated on and off, but it was really that initial ask which sent me on a trajectory of producing real-time graphical environments and videos for other artists. For this reason, our collaborations will always be special, and I appreciate Sage for her grit and commitment as an artist and performer, and also find she’s very easy to work with while still being firm and communicative. :0

Sage Fisher (Dolphin Midwives): Matt is a really incredible artist who I’ve known for many years, as a show space curator, installation artist and virtual world creator. When I asked him to do visuals for my A/V performance 3 years ago, he was making VR environments and did a cool project called VR spa, which was a group of new media artists exploring virtual reality with pseudo-healing offerings. I was curious and excited to collaborate with him to bring my music into this new frontier. This project probably took it way too far, but I think we landed on the moon. I’m so excited about the video and the reality we created together to support the song and my prayer. We don’t currently have plans for upcoming projects, but I’m sure we’ll work together again! 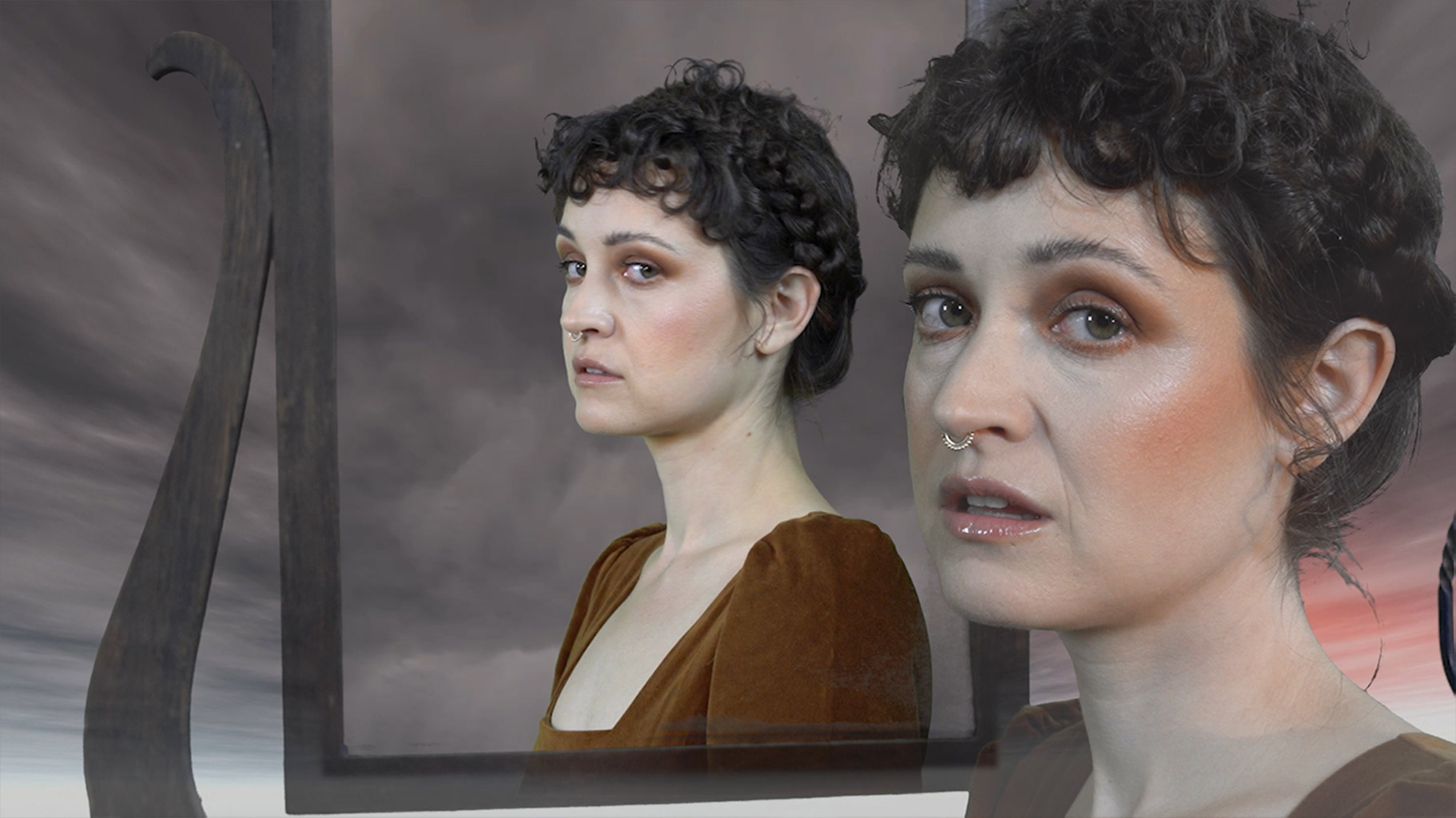 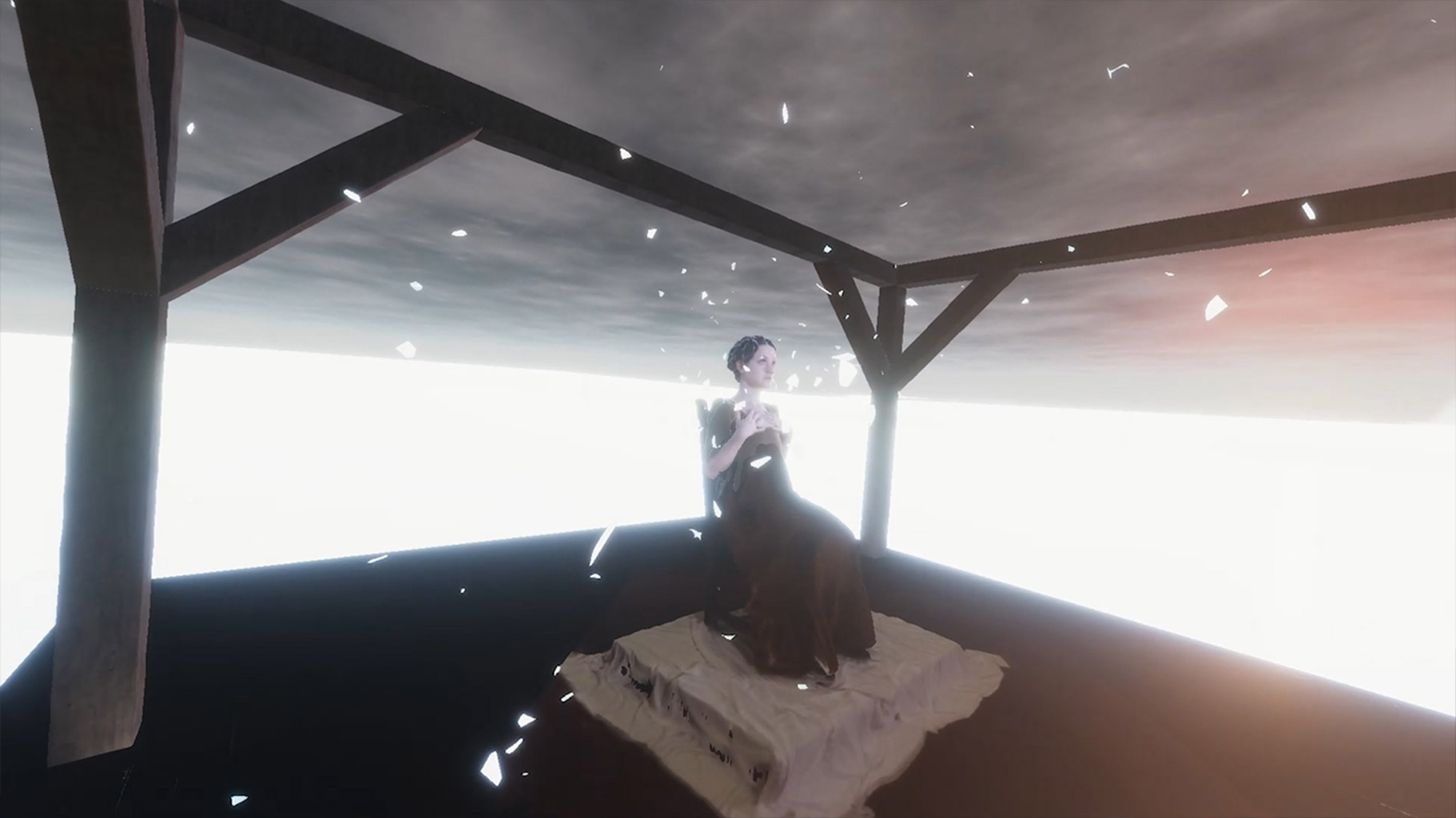 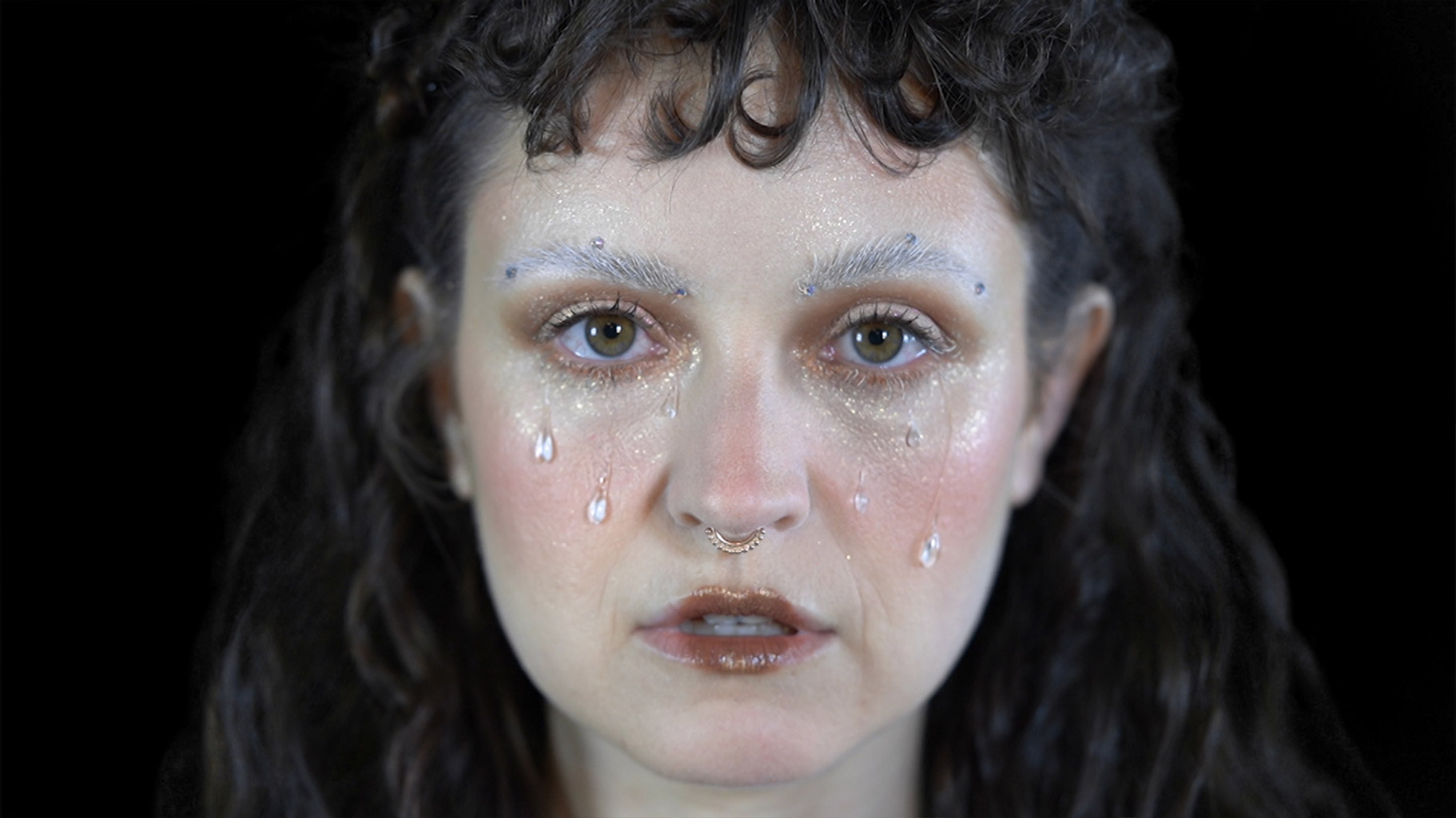 What should we know about Dolphin Midwives’ upcoming record? How does this track fit within it?

Sage Fisher (Dolphin Midwives): Body of Water will be released July 9th on Beacon Sound. It was recorded and produced by the amazing Tucker Martine at Flora Recording and Playback at the beginning of the pandemic. The work revolves around healing, transformation, empathy, physicality and the cathartic power and magic of crying. I explored rhythm, emotional vulnerability and voice as entry points into the depth and wisdom of the body.

These songs were written during a really transformative period in my life, as I gave myself permission to focus on my physical healing and reconnect to my body after living with a traumatic hip injury for over 8 years. Each song was such a deep dive, and I allowed rhythmic play, movement and discovery to inform my own rhythms, and my body’s rhythms – my heart, my breath, my cycles – inform the rhythms I played with. Some tracks literally use a digital drum kit I made of samples of myself and friends crying. This track drew from my installation piece about breaking ties with abusive systems, critical in the healing process — setting boundaries, breaking away is making that shift.

This song really captures it all, for me it creates a space where we can reflect honestly on how we participate in and perpetuate cycles of abuse — against our best interests, the interests of all humankind, and the interests of the planet — and really brings home the fact that we need to take a good hard look at ourselves, deprogram our old bullsh*t and look out for one-another if we are going to make it as a society and as a species!

Matt Henderson (aesthetic.stalemate): The fact that the song deals with the apocalypse is interesting, because the week leading up to delivering the video was fraught with intense heat waves causing my computers to completely meltdown. Everything that could go wrong seemed to be going wrong. Then, in the midst of this chaos, a random individual knocked on my door feeling the need to warn me about a demon he had created and let loose into the world. I won’t recite the full exchange, but there were uncanny synchronicities in what he felt the need to tell me. He said the demon was created over 10 years ago but that it was about to flip and turn good on June 25… which is the date the “Break” video is being released. Make of this what you will; it was quite disturbing to me at the time.

Sage Fisher (Dolphin Midwives): When we were filming the angel shots, it was midnight after 10+ hours of filming, and Matt was pointing a leaf blower at me, to blow my hair and dress, while Clamber was shooting in slow-motion. We couldn’t find the charging cable for the leaf blower, and it kept sputtering and dying, but miraculously continued sputtering and working just barely until we finished the shoot. That day was charmed.