When curating music videos for their forthcoming album, Walk in the Woods, the musical duo Nous Alpha drew on the artistic expertise of four artists who had previously collaborated with their record label, Our Silent Canvas. Comprised of Christopher Bono (Ghost Against Ghost, NOUS) and Gareth Jones (Depeche Mode, Grizzly Bear, Spiritual Friendship), Nous Alpha began with simple video recordings from their album recording process and offered it up to the artists for interpretation. The resulting works are colorful and intuitive; naturalistic and technological.
In the following Q&A interview, Christopher Bono of Nous Alpha describes how they worked with and selected their collaborators, while video artist Paola Olea and Laskfar Vortok share the creative process for their respective works. 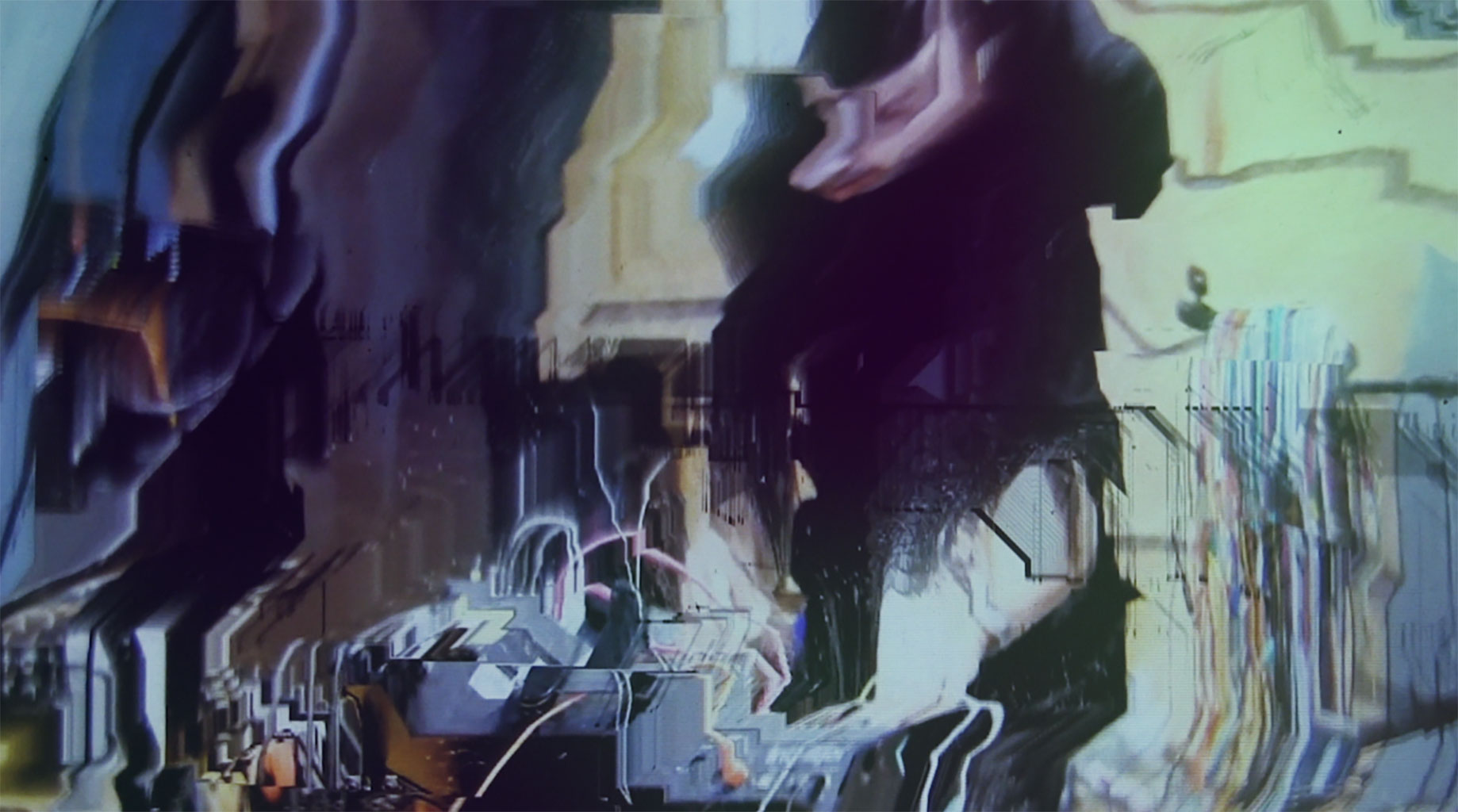 Nous Alpha involved a number of digital artists in this project. How did you choose the artists you worked with and what was a throughline you were hoping to achieve with the entire suite?

Christopher Bono (Nous Alpha): First off, thank you for the interest and the thoughtful questions! All four of the artists we chose had previously worked with Our Silent Canvas Records in the past. Ben, Paola, and Ployz each collaborated with us on the Tsyphur Zalan visual series project for the release of the third record in the Oceanic series of albums. We had recruited several motion designers to do some short 1-minute visualizations to a very long ambient drone album. We thought this team of three was perfectly well suited for the Nous Alpha project. The fourth artist, Laskfar Vortok, had done one of the videos for the political track “Darth Mango” from Ghost Against Ghost. He became a good friend after that project, so we invited him to the Nous Alpha video team as well.

When Gareth and I were tracking the Walk in the Woods album, we felt it was important to capture as much video footage as possible while in the studio sessions. Between working on the tracks, we tried to remember to set up and roll cameras. Of course, that can be very challenging to balance and remember during album production. The nature of our creative method and the private atmosphere of the writing process did not allow for us to have a video crew present during the sessions. At the end of the album, we looked back at the footage to figure out what to do with it. We immediately noticed it wasn’t particularly interesting on its own. We’re not a metal band, or some other active performing band; a lot of what we do is visually boring. To aspire to something of more interest, we took key moments of the footage and began the process of speaking to video artists about using the footage to build a visual piece around. The artists were given immense amounts of free reign, the only guiding factor was to use some of the footage for something like 20%-40% of the material. The results ended up being much more interesting than expected; we were very pleasantly surprised.

Looking at all of the pieces as a whole, what are some takeaways you feel from the relationship between sound and visuals they share? Are there any notable similarities or differences?

Christopher Bono (Nous Alpha): The video artists and I had a Zoom call — in some cases a couple — where we discussed themes and ideas. The main things we spoke about were the forms and rhythms of nature as well as the ideas of the healing capacities of plants and in particular a reflection on the world of fungi, mycelium, and the microbiome that supports our emergent existence. You can really see their take on these organic forms in Paola’s and Ployz’s videos. Ben and Laskfar took a different approach, using their programming skills to allow an algorithm to assume and interpret its own organic forms.

Do you hope to further expand on growing the visual language around your music in the future? If so, how?

Christopher Bono (Nous Alpha): Gareth and I have been discussing some ideas for the next step in the path for Nous Alpha. Whether it is the next project or record or further in the future, we are planning to do some immersive multimedia installation performances. An element of this would be to collaborate with a visual artist to perform in tandem with us in some way transposing what we’re doing into the visual dimension, and possibly vice versa. We also are interested in potentially scoring a film together if the right project emerged, as well as entertaining the idea of making our own personal films to score in the future.

Responses from Poala Olea, video artist for “For Hollow”:

ON WORKING WITH THE ALBUM THEMES
It was very important to rescue the essence of “Fox Hollow,” a mix between nature inspired rhythms and the beauty of electronic sounds. The meeting point between these two worlds was the idyllic moment to create imaginary living digital organisms. Sound and music are able to generate a digital entity that manages to coexist and breathe in a natural organic world.

It’s a journey through nature, where music is the link to emphasizing a dance of rhythmic pulses that generate and give life to digital organisms. This dance is synchronized in an organic visual landscape which makes the imagery bloom. Revealing those moments of life that nature offers, that are hidden from our sight, from flowing particles coordinated with rhythmic impulses, to complex organisms that evolve and synchronize with the music. In short, it’s an invitation to live a sensory journey through the link between music and nature.

ON THE SOFTWARE AND TECHNOLOGIES OF THE VIDEO
My visual pieces always focus on generative art, which refers to art that in whole or in part has been created with the use of an autonomous system. I wanted to generate digital organisms that felt alive, and decided to use Notch, a real-time visual effect authoring and rendering engine, with a compositing engine neatly fitted on-top of each to help glue them together. This gave me the freedom to create and experiment with 3D objects and particle systems, generating visuals that react to the audio in real time.

ON WORKING WITH THE ALBUM THEMES
In conversing with Christopher Bono for the relational thematics of “Virtues,” it became clear that the organic nature of the recording sessions and their more abstract connections with networks of organic matter themselves (such as mycelium) gave way to a visual framework which could freely articulate the associative environs and processes that we associate with fungi (decay, de-composition, degradation). From here, I became interested and curious in different methods of linking what was happening visually to these integral organisms and the by-products of their biological activities.

The relationship between visuals and music rests in part upon the work of my collaborators, and encompasses ideas of natural movement, as exemplified in Estevan Carlos Benson’s natural brushstroke technique, which at times envelopes the frame or over-takes it in a manner mirroring fungal growth. In addition natural movement as (re)enacted by humans, there are are the 3D-renderings of LADY BAMBS, which (re)created procedural models of digital movement that directly embody mycelial network propagation and which provide a channel into the microcosm of these organic structures, which I believe Nous Alpha was also achieving with their heavily modulated and dense textures in the music.

ON THE SOFTWARE AND TECHNOLOGIES OF THE VIDEO
As for software, most of my work revolved around the use of digital video with Max/MSP/Jitter, to create displacements and breakages in the frame (the ‘melty’ sequences we see throughout). Kerstin Hovland helped create particle systems and normal maps with Notch which was then overlayed onto the musicians performing in the studio. LADY BAMBS created her 3D models using Houdini, and Estevan Carlos Benson’s medium was brush, ink, and paper.

This video offered new paradigms in collaboration, and the result is infused with a great deal of layered and original material. I do enjoy when such mixtures and pollinations are able to occur as they do here, through group spontaneity and aesthetic coalescence.

Nous Alpha’s Walk in the Woods is out now on Our Silent Canvas Records.