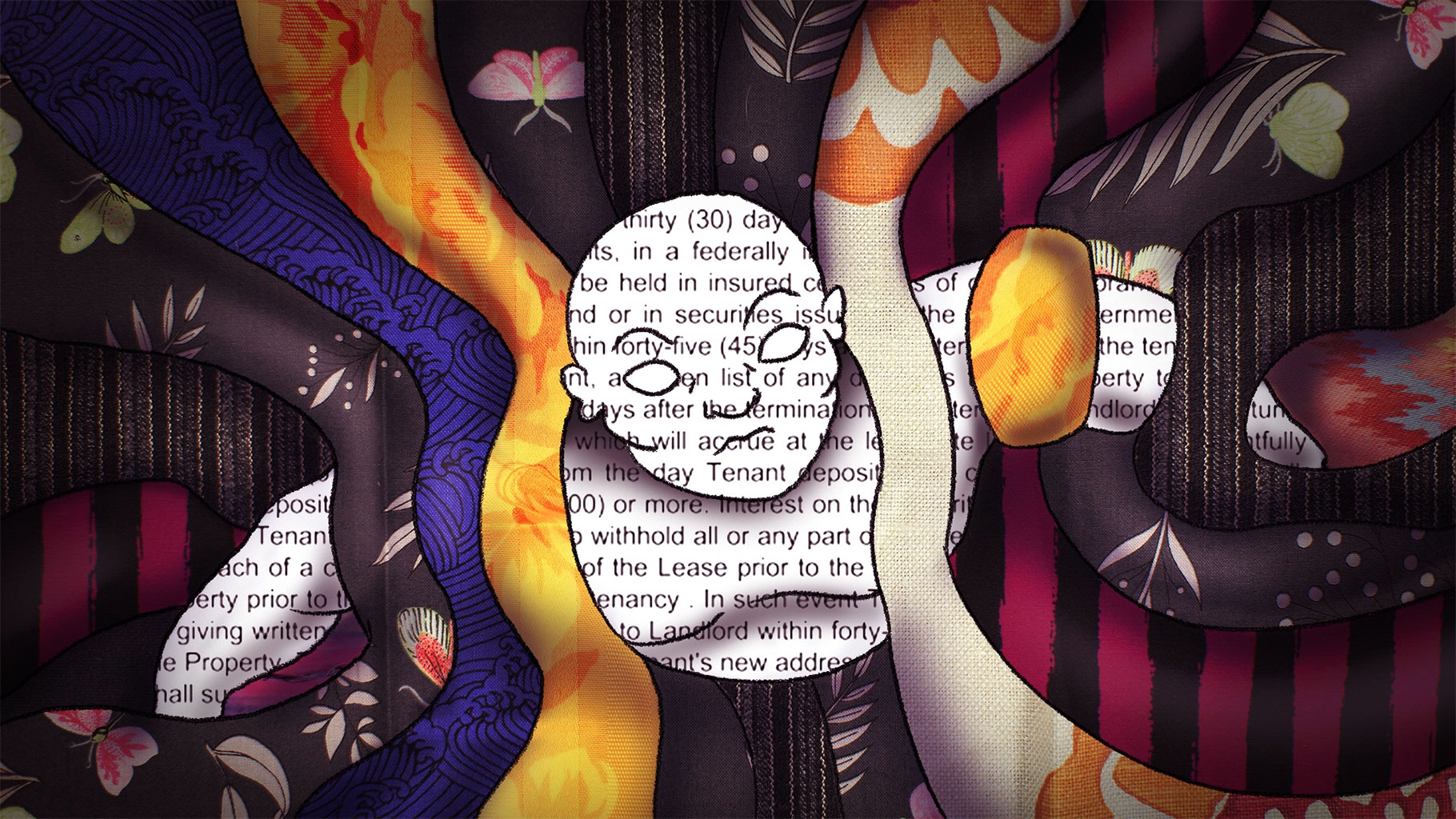 Building off a longstanding friendship, Portland-based queer, nonbinary musician Jan Julius and Baltimore-based animator Nick McKernan explore their second collaboration together with the textural, collage-heavy music video for “Manor Holes High Rise.”
“Manor Holes High Rise” presents the struggles faced by too many of BIPOC and LGBTQ+ communities, especially amidst the COVID-19 pandemic, by centering a diverse set of visibly trans characters. They bask in the glory of one another’s company until they are forced to fight against a capitalist landlord who threatens to take away everything. This narrative tracks with that of Julius’ latest full-length record, Meat Shot Idyllic, which they explain “is wrestling with our apocalyptic times and finding moments of joy and resilience in queer communities.”
Read on as Julius and McKernan speak on their beautiful collaboration which seeks to transform the gloom into something better.

Would you mind speaking a bit to your collaborative relationship? How much back-and-forth was there?

Nick McKernan (Animator / Director): Jan and I have been close friends for over a decade. One of the formative moments in our friendship was when we were onstage as highschoolers, both of us with guitars. We just started improvising. I was screaming and they started harmonizing, and I was like, “Oh my god, they’re actually going there with me.” And we’ve been close friends ever since.

Jan Julius (Musician): Nick and I met in the 6th grade, though we didn’t really become friends until our senior year of high school, when we sat next to each other on a bus and realized we had the same dumb sense of humor. We’ve remained friends since. Nick and I send each other nearly everything we make for feedback and encouragement. He’s listened to early versions of almost everything I’ve released, and he contributed vocals to “James Duval After Nowhere” on my Easy Intimacy EP. Nick was one of the first people to hear my early demos of the songs on Meat Shot Idyllic, and at some point mentioned wanting to make an animated music video, since he had recently worked on a video for the band Wasted Shirt with some other folks, and wanted to try something on his own. He ended up making two: first “Soft Friends,” and now, “Manor Holes High Rise.”

“Soft Friends” was born from a long brainstorming conversation on the phone, where I told Nick I wanted something akin to the orgiastic and violent club scene in Devilman Crybaby, but with soft, amorphous and illegibly-gendered beings as the protagonists. We started talking about it right before COVID-19 hit. At that point, I was laid off and Nick wasn’t in school, and we holed up at our houses, me in Portland and him in Baltimore, as I recorded the album, and he animated the video.

Nick McKernan (Animator / Director): Early on, I wanted [“Manor Holes”] to be a sort of big-sibling to the previous video I made for them [“Soft Friends”]. Whereas that video explored gender fluidity and sanctity in community, “Manor Holes” seemed to really dial it up to 11. I was running through a park in Baltimore when I first heard the demo Jan made, and it felt like two meaty hands yanked me into the headphones. It was so immediate and propulsive. And so cinematic! One of the earliest visuals that came to mind was a character running through a door of a skyscraper and hurtling towards the earth, in a dream. A lot of Jan’s music is like this tender suplex to the system. I was immediately flirting with the idea when we chatted. “Y’know, what if ‘Manor Holes’ was a music video?” And then eventually the right window opened up, and we were off!

Like the first video, we started with a phone call. It’s really important for me to hear what the song means to Jan. I had an idea for a parasitic landlord roosting at the base of an apartment complex, tethered to its occupants like a symbiotic relationship turned toxic. We discussed the imagery I was proposing pretty extensively. The lips of the landlord for instance became a way of showing the consumptive, biting qualities we can inherit from a capitalist system, contrasted to a kiss one of the “Manor Holes” residents gives to their companion, a symbol of love that lingers on a bandage throughout. The video wrestles with a lot of this duality. Lips were a small way of showing that visually.

Jan Julius (Musician):
We continued to talk regularly throughout the creation of the video. I was mostly a sounding board for ideas. Nick explicitly wanted to have more human characters in this video, who could live and touch and fight, instead of the abstracted and amorphous figures of “Soft Friends.” We talked over the designs, using the idea of the soft friends as their basis. It felt crucial to me that the characters had diverse, squishy bodies and were visibly trans. Further calls involved Nick explaining the world he was creating, and talking through its internal logic. The idea for a high rise building made of sheets was one of his first ideas, and we spent a long time talking about how the dream-like visual language of the video could elaborate upon the themes of the song, with the landlord literally being supported by the fabric of its tenants.

Nick McKernan (Animator / Director): One road we didn’t go down was a very early idea on transparent walls, floors, and ceilings. I was envisioning an apartment complex where all the tenants could see into each other’s lives. Through our chats, I could get a sense that the queer paradise/dystopia of this world was less about transparency. Our characters needed to be front and center. Instead of them gazing through clear walls, they were meant to share the same space. And space — the close proximity, and the threat of that safe space being shattered and violated — became a paramount theme for the song and video.

Can you speak a bit to the animation process and the technologies required to create it?

Nick McKernan (Animator / Director): Definitely! After an initial designing phase, I landed on an idea to have the character’s skin exist as these moving fabric textures — a contrast to the walls and units of the Manor Holes High Rise, which were fabric textures as well, but flat and unmoving. I dug through some free clothing bins and got dozens of samples of textiles to photograph, then reached out to Danielle Hernandez — an incredibly talented garment maker, tattoo artist, and friend living in Baltimore. Many of her textiles ended up in the video, with two of them being used for primary characters.

At the time, I had a few weeks left of Undergrad and my time at school [Maryland Institute College of Art] was coming to an end. So I managed to get tested and use the school labs one last time photographing all these garments and moving each one incrementally to create these image sequences of the clothes moving. It took about 8 hours! But it was kind of a perfect farewell to this space I was lucky enough to work in for the past few years. It was the ‘one last ride’ moment I didn’t think I would get, given the pandemic.

Once all the image capturing was complete using a program called Dragonframe, I incorporated the image sequences into the 2D animation I was doing in Photoshop, combining the physical and digital elements in there. Timing-wise, I stuck very closely to an animatic I had done in pre-production, though it deviated pretty heavily in some areas when it came to the visuals! 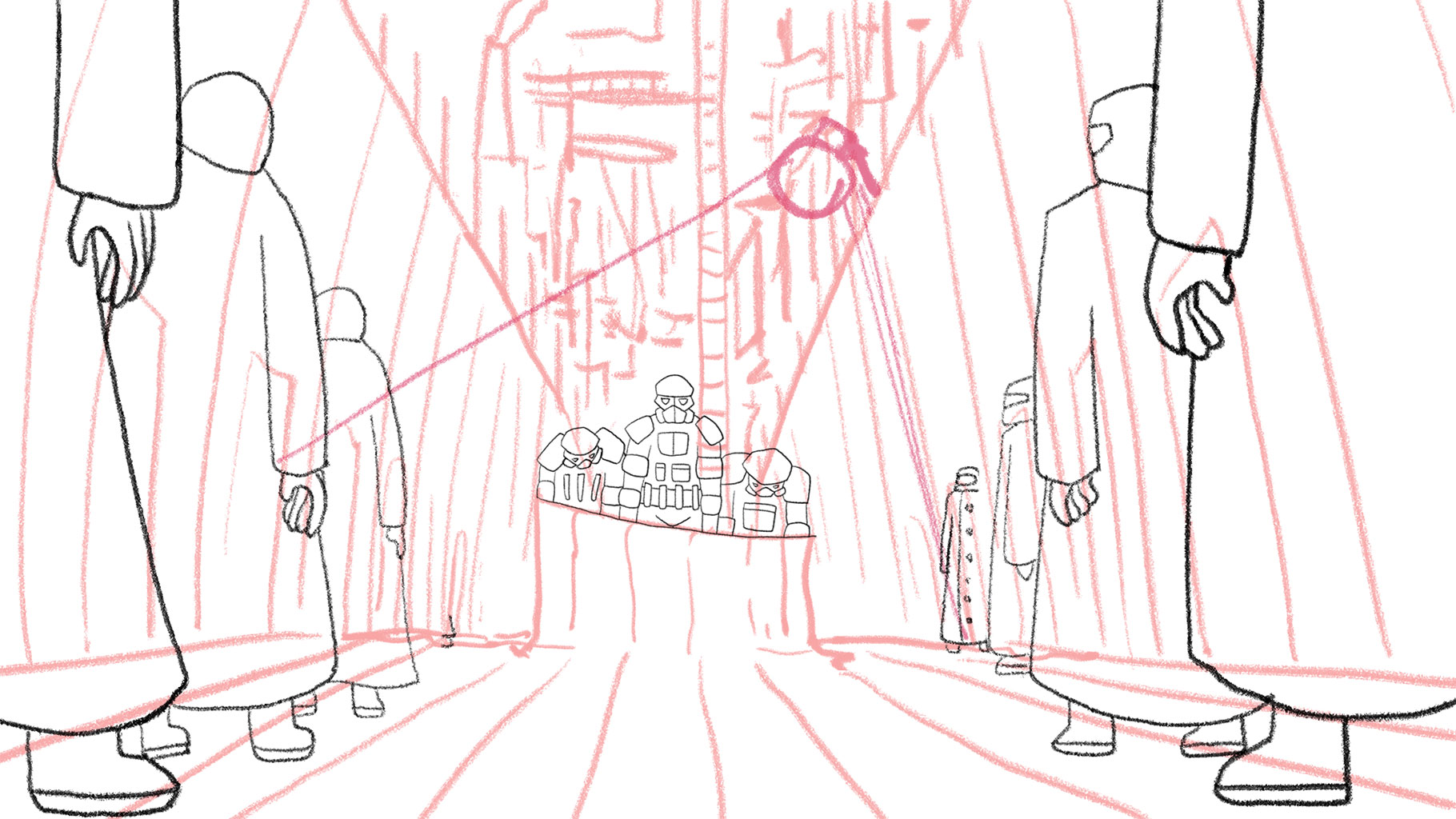 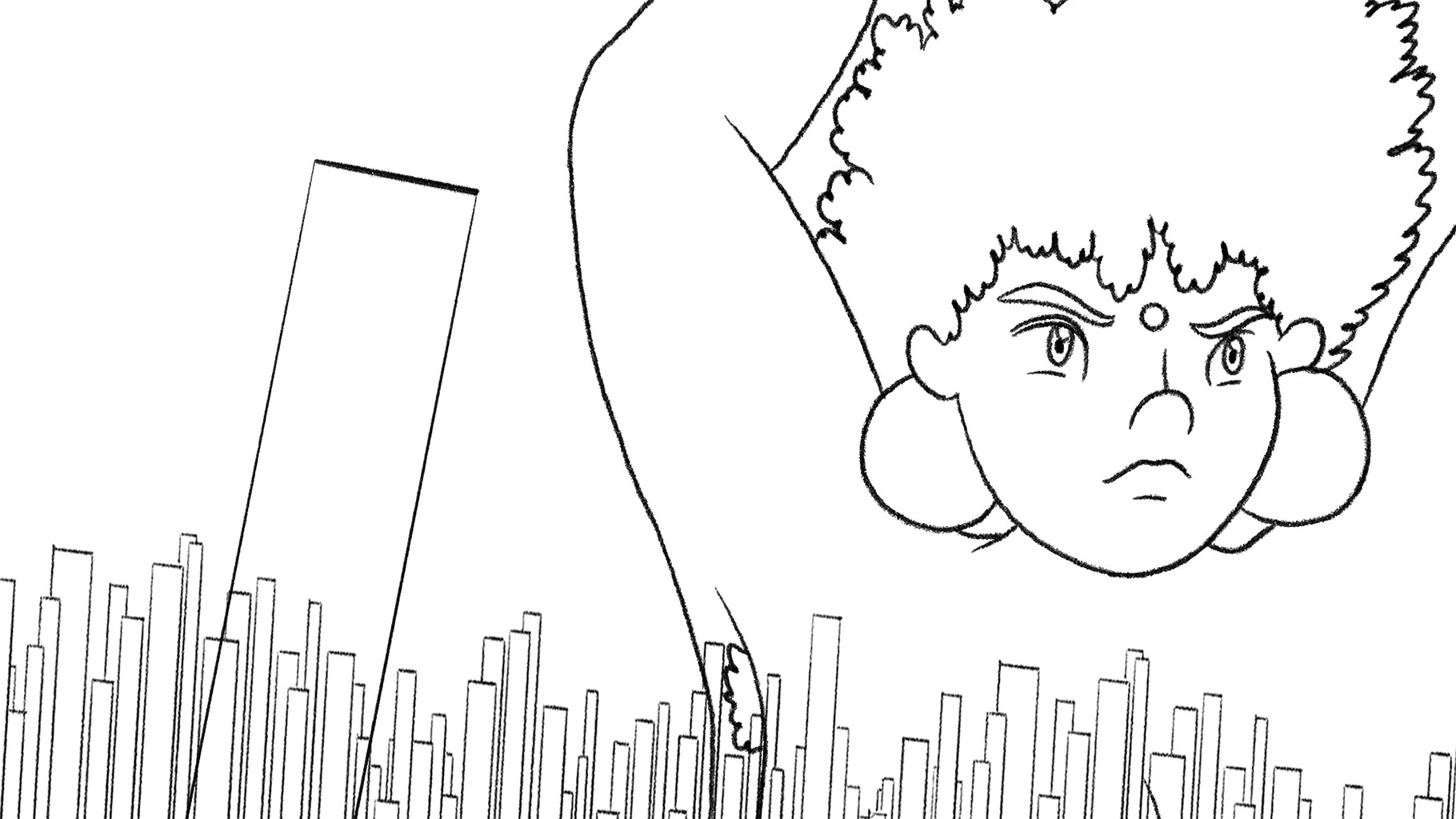 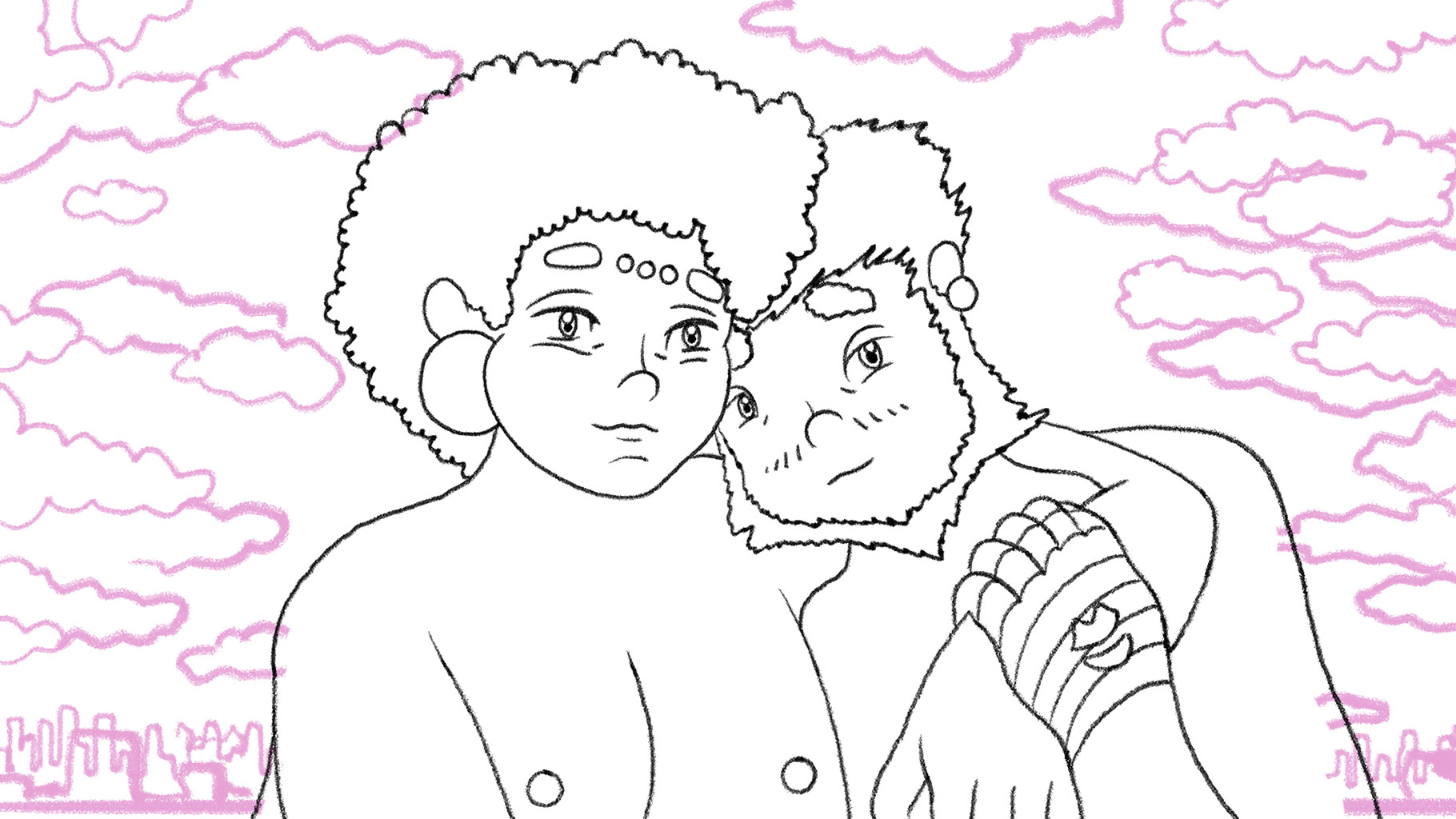 What do you think is the importance of centering a video around these topics and characters in this time? What do you hope viewers might take away from it?

Nick McKernan (Animator / Director): While we continue to fight for our bodies and our rights, there are many who just want people to stay silent and blend into the environment. So, the titular apartment complex existing as both this refuge for queer and BIPOC characters as well as this structure built and tethered to these insidious capitalist forces seemed vital. Having your identity literally consumed into the infrastructure of a broken system is what the characters of the video fight against. Making this video was manifesting a lot of this anger I was feeling. At a certain point, a lot of non-conforming individuals are expected to assimilate. Under rental agreements or contracts, many of us are forced to. I wanted to find a way of showing that there’s a duality — that we can fear being co-opted by a space, commodified into a piece of property or only seen as numbers on a check… but we also fight for our spaces and exert a lot of beauty in transforming them. Jan’s music really acted as a conduit to dive into these feelings deeply, and create a video that I hope inspires love and resilience.

Jan Julius (Musician): [The LP] Meat Shot Idyllic as a whole is wrestling with our apocalyptic times and finding moments of joy and resilience in queer communities, which “Manor Holes” exemplifies. I’m trying to make queer, anti-fascist art that speaks to our times, and speaks to communities surviving the interlocked crises of capitalism and global warming that we’re experiencing right now. I wrote most of the lyrics to the song before COVID-19 hit, but the pandemic has highlighted how severe the housing crisis is, and how little our institutions are willing to do to ensure poor people have housing. “Manor Holes High Rise” shows a not-unattainable utopian daydream of life free of parasitic landlords and institutions, where marginalized communities can support and protect one another.

Nick McKernan (Animator / Director): I actually animated about 40 seconds or so of animation that I later cut! The style was completely different, with thick ’80s comic book-inspired lines, a black and white palette, and acted as kind of a prologue for the bikers. It lacked all the fabric textures that eventually went on to define the visuals for the video! After I completed this section, I had to take a break and analyze what wasn’t working. It was a gut feeling. A lot of puzzles were solved when I abandoned the comic-style and leaned heavily into the fabric textures, characters, and colorful elements of the world. Sometimes that feeling that something is “off” is actually the greatest blessing. And sometimes you feel it most right before a project takes flight and finds its voice. 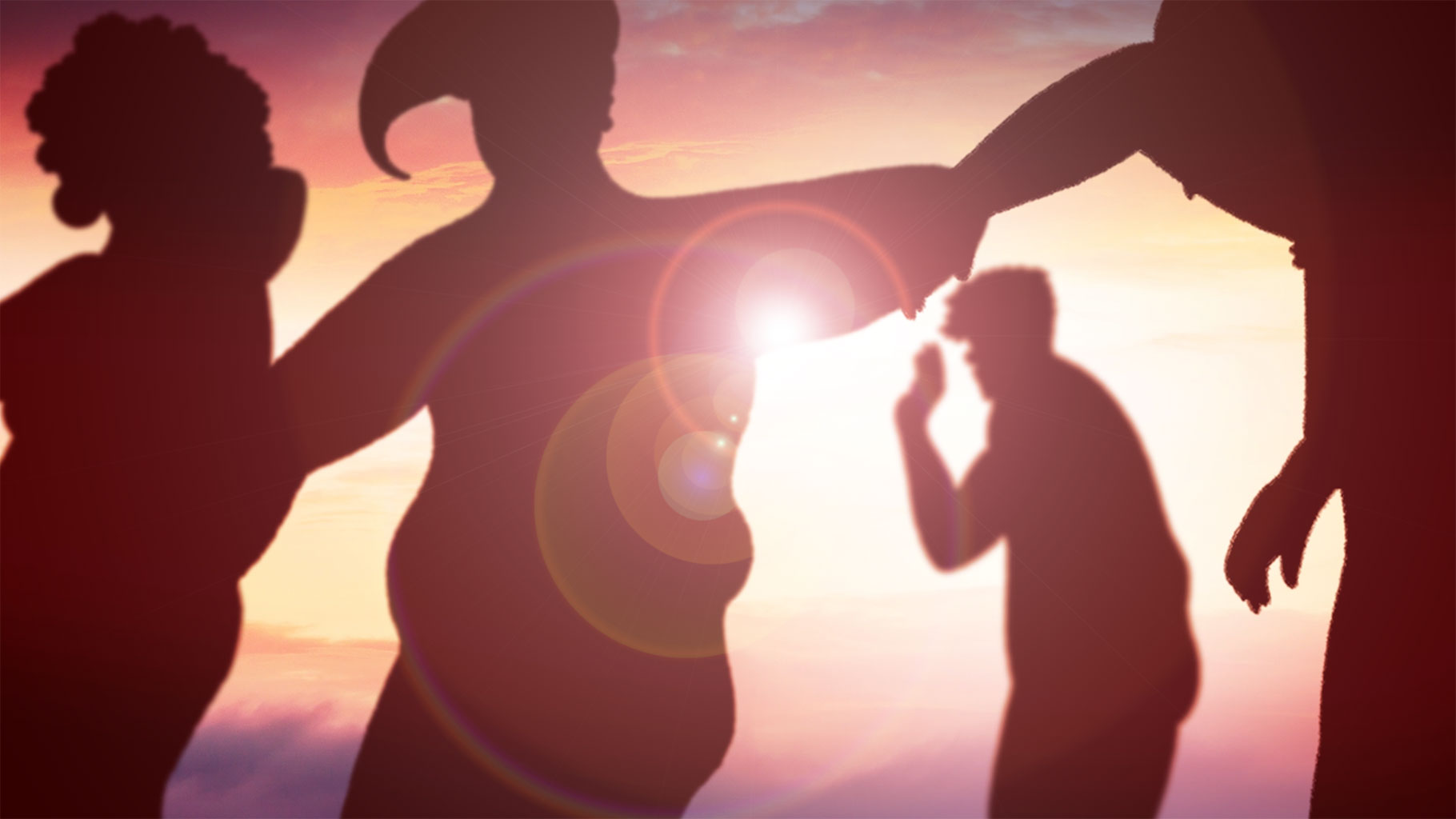 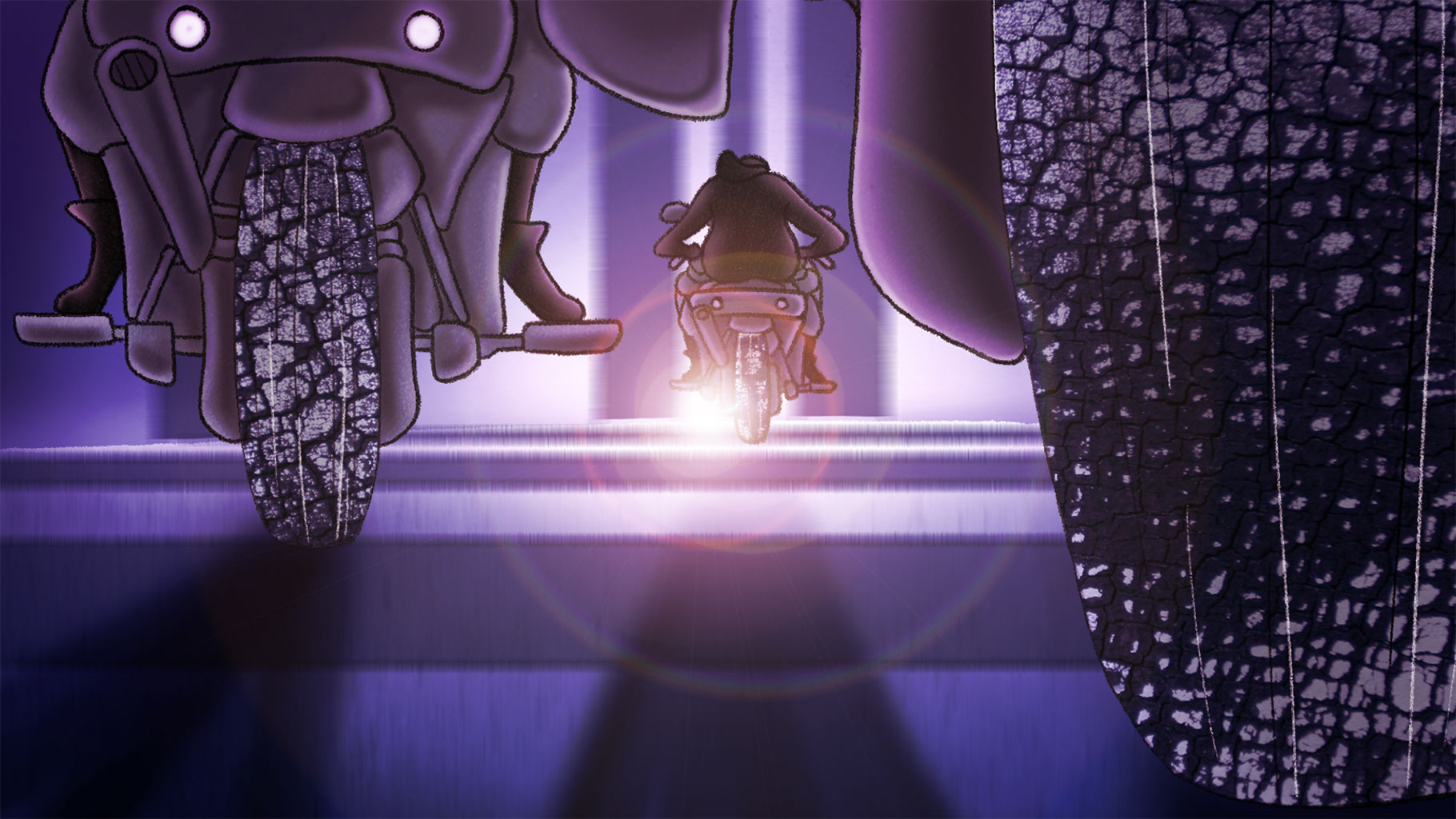 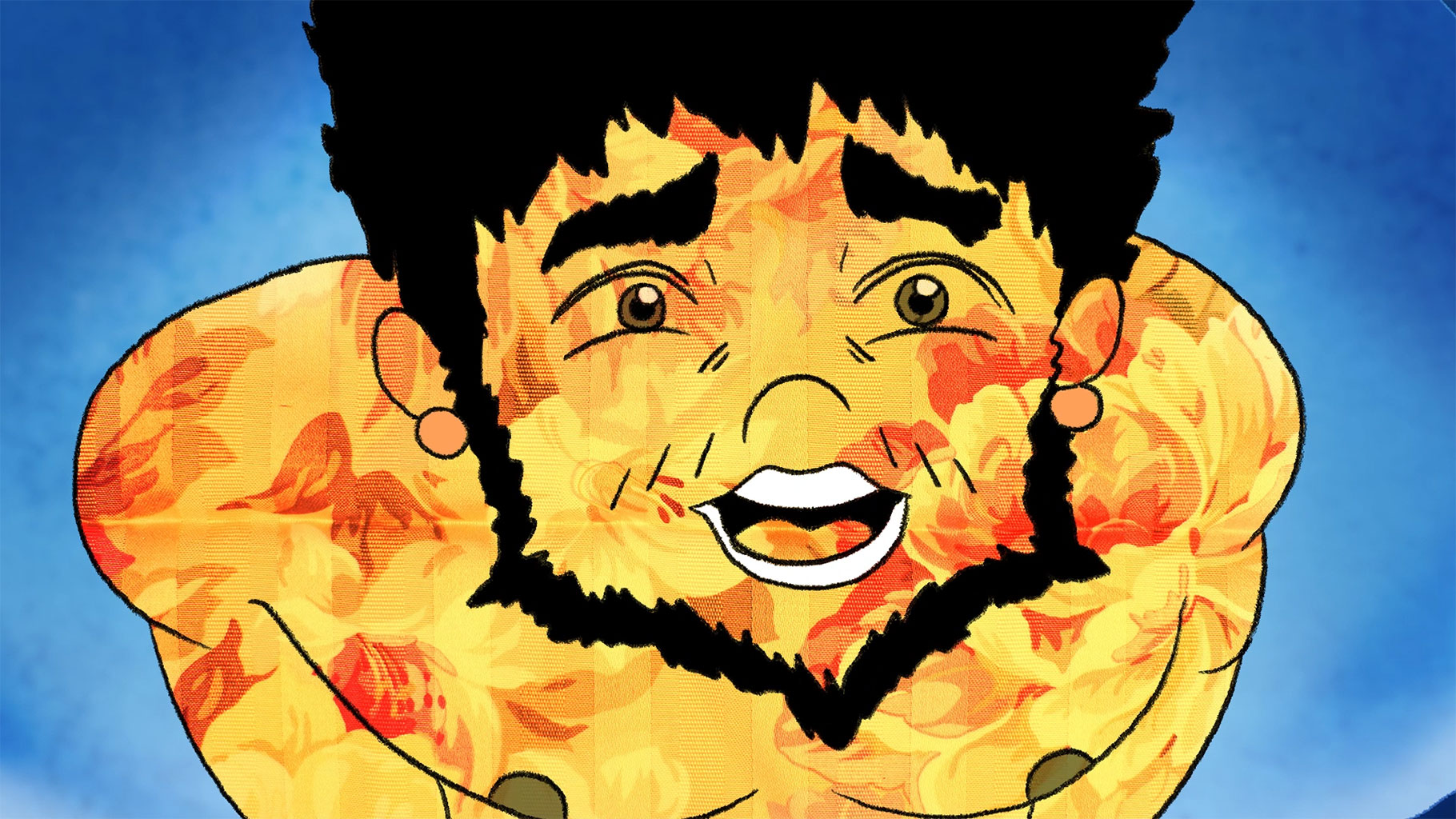 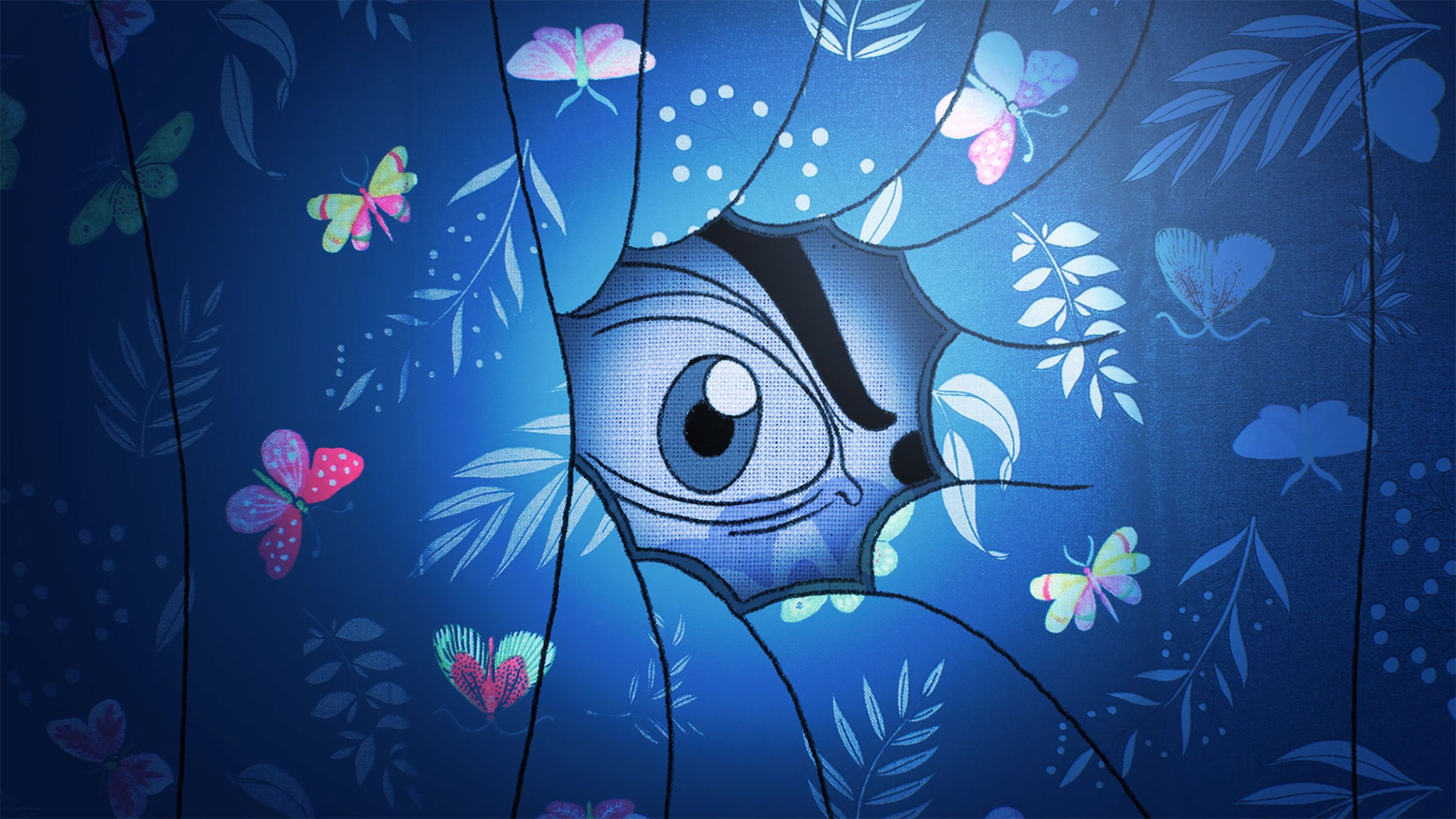 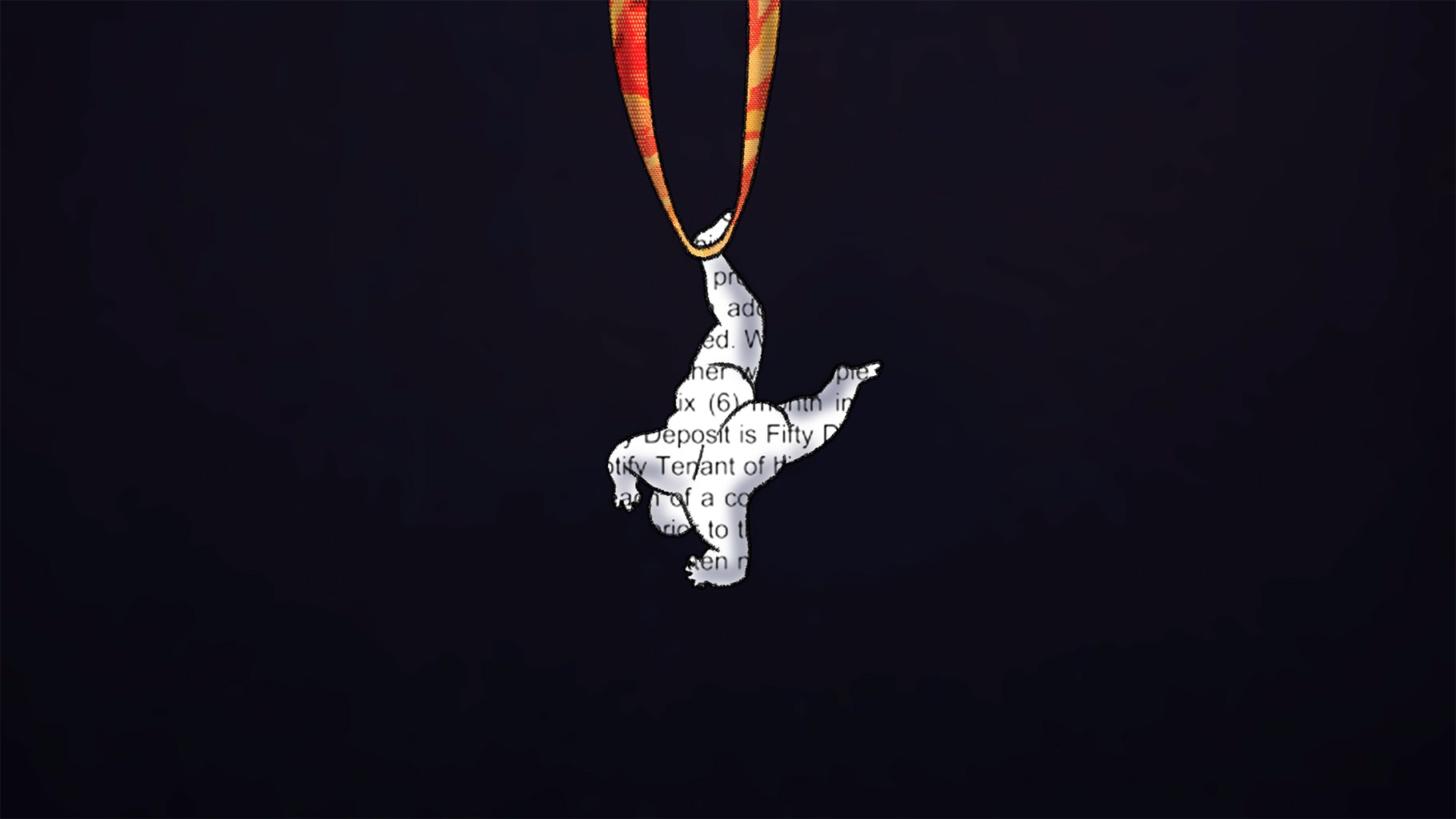