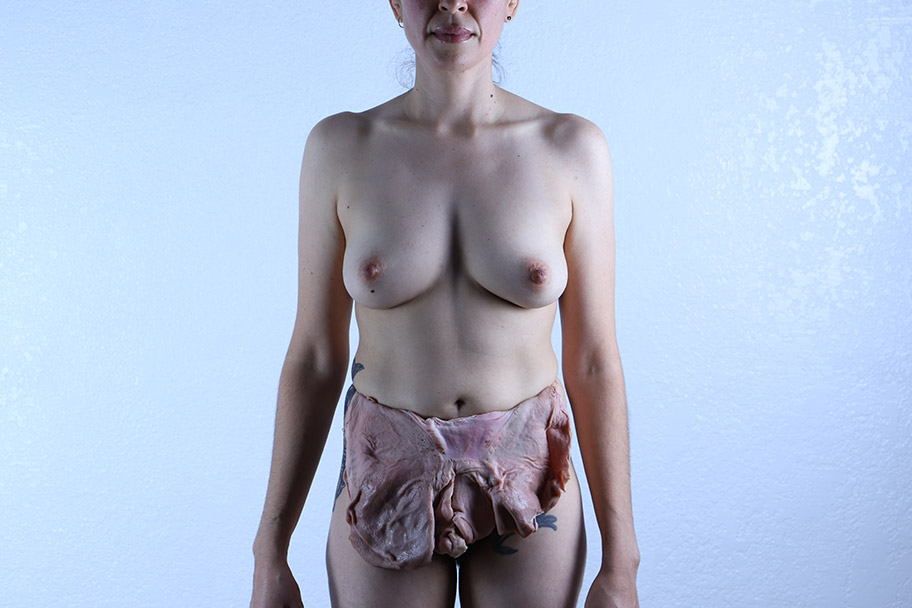 A heavy cut of fresh meat hangs suspended over the abdomen, the artist’s own body bare against the blue cold of a wall. Her abrupt movements cause ripples in the flesh of the meat. From where the viewer sits, the female body, nearly decapitated, is unquestionably susceptible to becoming a site for horrific acts. The short video Blindsided is an audiovisual experiment by Annabel Turrado, the first of three developed during Yellow Fish Durational Performance Art Festival VI — a long form inquiry into durational performance as a means to support methods of staying alive in our present times. Turrado is one of nine featured artists whose participation in YFVI will culminate in a live performance May 2021 in Red Hook, New York.
Blindsided is an embodied “interpretation of the gross disregard ICE has on human life, particularly the women in their custody that were sucker punched with these insane and sneaky sterilizations,” explains Turrado. The accompanying pieces are an extension of this grave sentiment, collectively emphasizing the inhumane conditions of detainment with its irreversible impacts on immigrants and their families.

In Raspado, using a tool for making Mexican snow cones, she calls for the abolishment of ICE through a repetitive deliberate gesture, shaving away at a solid 50-pound block of ice for 3.5 hours. The physical implications of this exertion remain largely undocumented in the video, though the blood, sweat, scrapes, and aches are easily inferred. “My parents immigrated to California in the 70s from a small town outside of Guadalajara, Mexico,” Turrado reflects, “so that unborn us (my siblings and I) didn’t have to grow up breaking our backs like they did.”

Tiling nine asynchronous frames of action, she crafts an audiovisual cacophony, a dizzying accumulation of street sounds and curious strangers set against a relentlessly rhythmic scraping.

The final piece in the series is Mending, in which she sews back together bisected sheep hearts. Sheep because of its proximity to the size of a human heart. Wielding a needle and twine with tremendous care, four halves become whole again, yet never quite what they once were. Turrado incorporates organic material into her practice with a mind for no waste. What remains of the meat from this series is still in her freezer — a special treat awaiting her canine companions: Angie, the 14-year-old Chihuahua boss and Casper, an 8-year-old Husky/Shepherd mix. 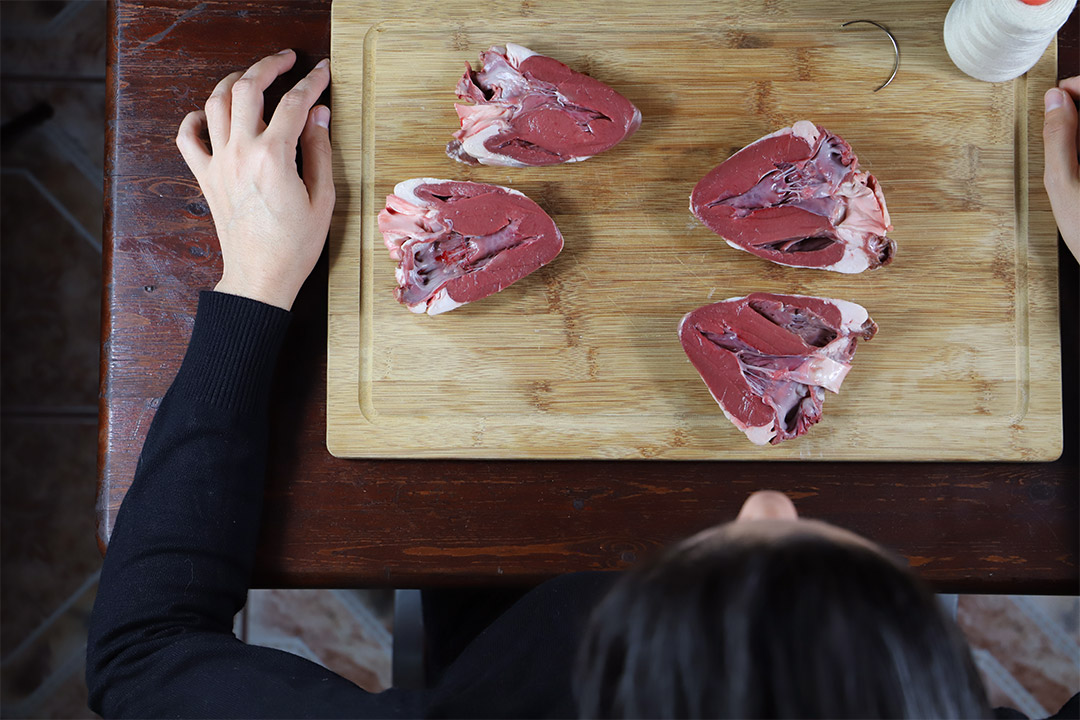 During a recent artist talk for Yellow Fish, Turrado opens the space with, “We will never have this moment in time together again.” She takes the video call outside, against a tree-lined park horizon dipping gently into a Los Angeles dusk. In a refreshing stray from convention, she insists on not sharing her screen — “I don’t want to take myself that seriously” — instead inviting participants to bask in a few precious moments of shared silent awkwardness before getting started. (Turrado enjoys the amplification of monotony.) Over the next hour, the virtual audience gleans snippets about how her search to exorcise emotion through bodily movement while distilling an idea to its essence ultimately draws her to the mental and physical endurance of durational performance. “I’m interested in how time affects space and energy, how the accumulation of the past, which only exists in body/mind memory now, affects the present. It’s an exploration in the ephemeral process of the space between: the space between action, the space between breath, the space between thought.”

This betweenness may feel familiar to first-generation makers and doers carrying the responsibility, as children of immigrants, to see the rights and gifts and lives of immigrants honored, celebrated, and remembered.

Turrado’s work has a way of rattling and reorienting the senses toward a core truth, what was out of focus a moment ago suddenly painfully clear. In preparation for the final installment of Yellow Fish, she is actively producing three new video works to accompany Raspado in an installation that will house a live 12-hour performance starting at 12:01am on May 29.

Yellow Fish Festival participants will actualize their physical performances inside 153 COFFEY, a multidisciplinary, artist-led studio in Red Hook, New York dedicated to exploring the dramatic potential of constructed space through performance, film, and design. For those unable to attend the limited-access live performance, a three-hour segment will be broadcast as a virtual livestream.

Rana San is an artist, curator, and media maker whose creative practice melds dreamwork, written word, embodied movement, video poetry, and analog photography. She uses experimental modes of visual storytelling to examine intimacy and interdependence as spiritual tools for survival. In community, Rana crafts collective experiences that celebrate the work of independent artists and activists who center emergent practices in moving image media and contemporary performing arts. As the Artistic Director at Northwest Film Forum, Rana co-curates year-round programming, including ByDesign Festival, Cadence: Video Poetry Festival, and Local Sightings Film Festival. Her engagement as a co-curator for Yellow Fish Festival VI, a long form inquiry into durational performance art as a means to support methods of staying alive in our present times, will culminate with live performances in New York this May. As a first-generation daughter of immigrants from the Middle East, she is honored to call Seattle, the traditional land of the Coast Salish people, and specifically the Duwamish Tribe, home.