Alison Smith9 min read1 month agoAdd comment
Tracing the last century of Kauai’s history and its representation in film, Anthony Banua-Simon’s documentary, Cane Fire (2021), begins with a mystery: what happened to the never-released romance White Heat (1934)? White Heat was the first film to feature Kauai, Hawaii’s fourth largest island, and since then, more than sixty films have been shot there.
For Banua-Simon, White Heat is far more than just an interesting bit of trivia. It may offer an elusive glimpse of his great-grandfather, an immigrant from the Philippines who worked over Kauai’s sugar and pineapple plants and stumbled into acting as an extra. The revelation that his great-uncle Henry followed a similar trajectory, from laborer to film crew member, inspired Banua-Simon to dig into Hawaii’s overlapping onscreen and offscreen histories.

Indeed, Cane Fire masterfully weaves together an array of films, from blockbuster to pulp. What may initially strike the viewer as escapist fantasies turn out to mirror the political concerns of the era, particularly anxieties over organized labor. In peeling back the layers of mystique constructed by these films, Cane Fire provocatively reimagines Hawaii’s representation.

The concept for Cane Fire came to the New York-based Banua-Simon while he was working on a documentary about the sugar industry in Brooklyn.

“I knew that my family was involved in the sugar and pineapple plantation history, but it was all kind of vague to me,” he says. “So right after I finished the project in Brooklyn on the Domino Sugar Refinery, I ran over with just a camera and hung out with my great-uncle Henry. What you see in the film — this journey we’re on together — was really kind of as it happened. Henry was a part of so many of the shape-shifting industries in Kauai; it was a very interesting starting point.”

Banua-Simon, who grew up in Seattle, adds, “The Hollywood part: it really comes from my first trip as a child, and wanting to connect with my cousins but feeling like an outsider, awkward and uptight, and knowing that it meant something different to them than to me, seeing all these films. I think looking back on it, I was interrogating, ‘What was appealing about these films, how did people see them, and what are they actually saying?’”

Cane Fire ambitiously begins with late 19th to early 20th century history, when different immigrant groups were successively brought to Kauai to live in ethnically segregated camps. As muckraking reporters revealed at the time, whole families toiled in the fields and canneries in squalid conditions. Just one indignity among many, Banua-Simon describes how his great-grandfather was demoted from supervisor to ditch-digger and made to work alongside his son as punishment for organizing.

Faced with a PR crisis, the dominant sugar companies, known as the “Big 5,” collaborated with Hollywood and the Hawaii Visitors Bureau to rebrand the island as an idyllic paradise. Cane Fire contextualizes sometimes baffling sequences from the new genre of “South Seas fantasies,” like the risqué dance number from the pre-Hays Code Honolulu (1933). The film uncovers a shockingly long-running symbiotic relationship between the Big 5 and Hollywood. 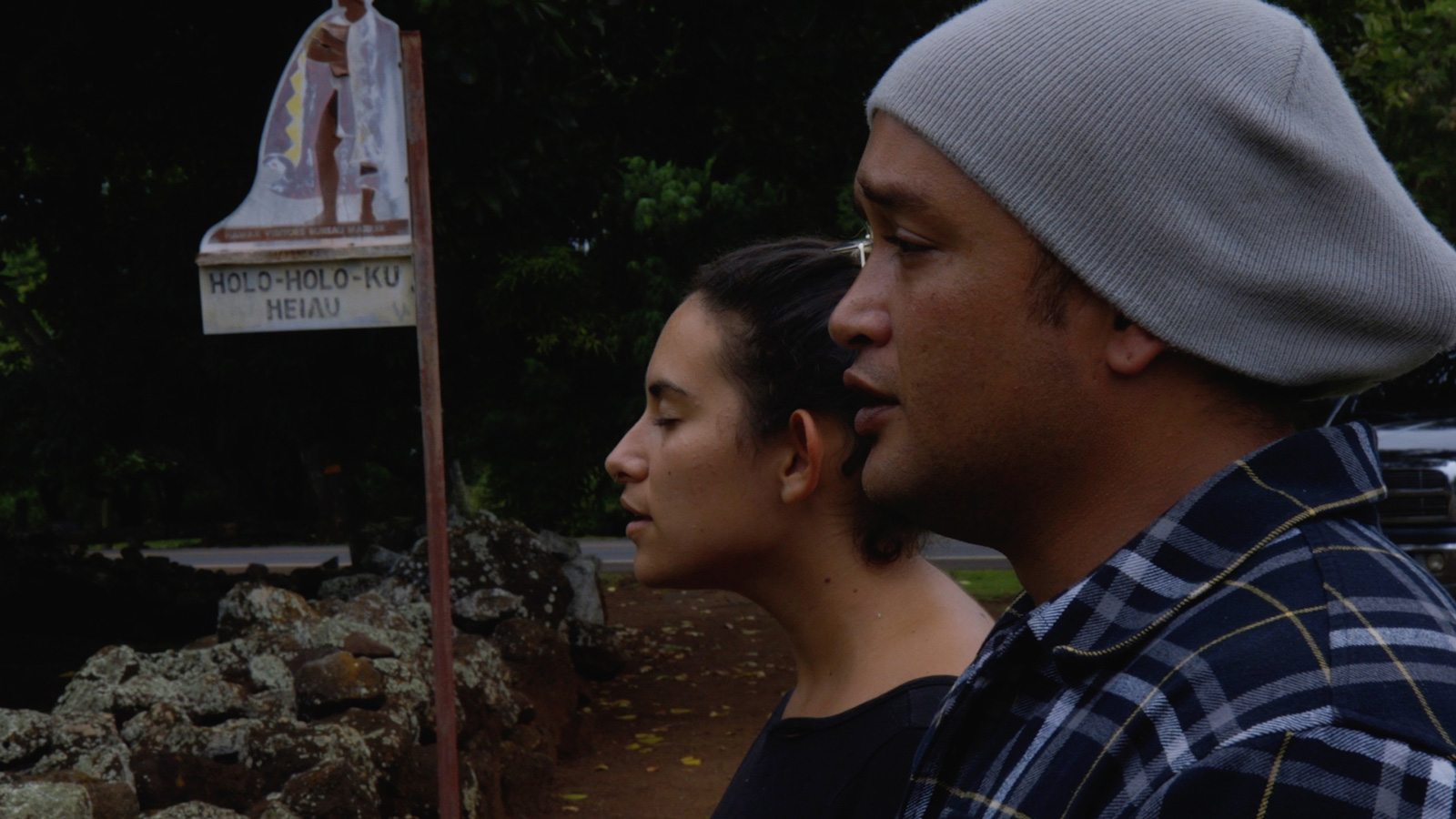 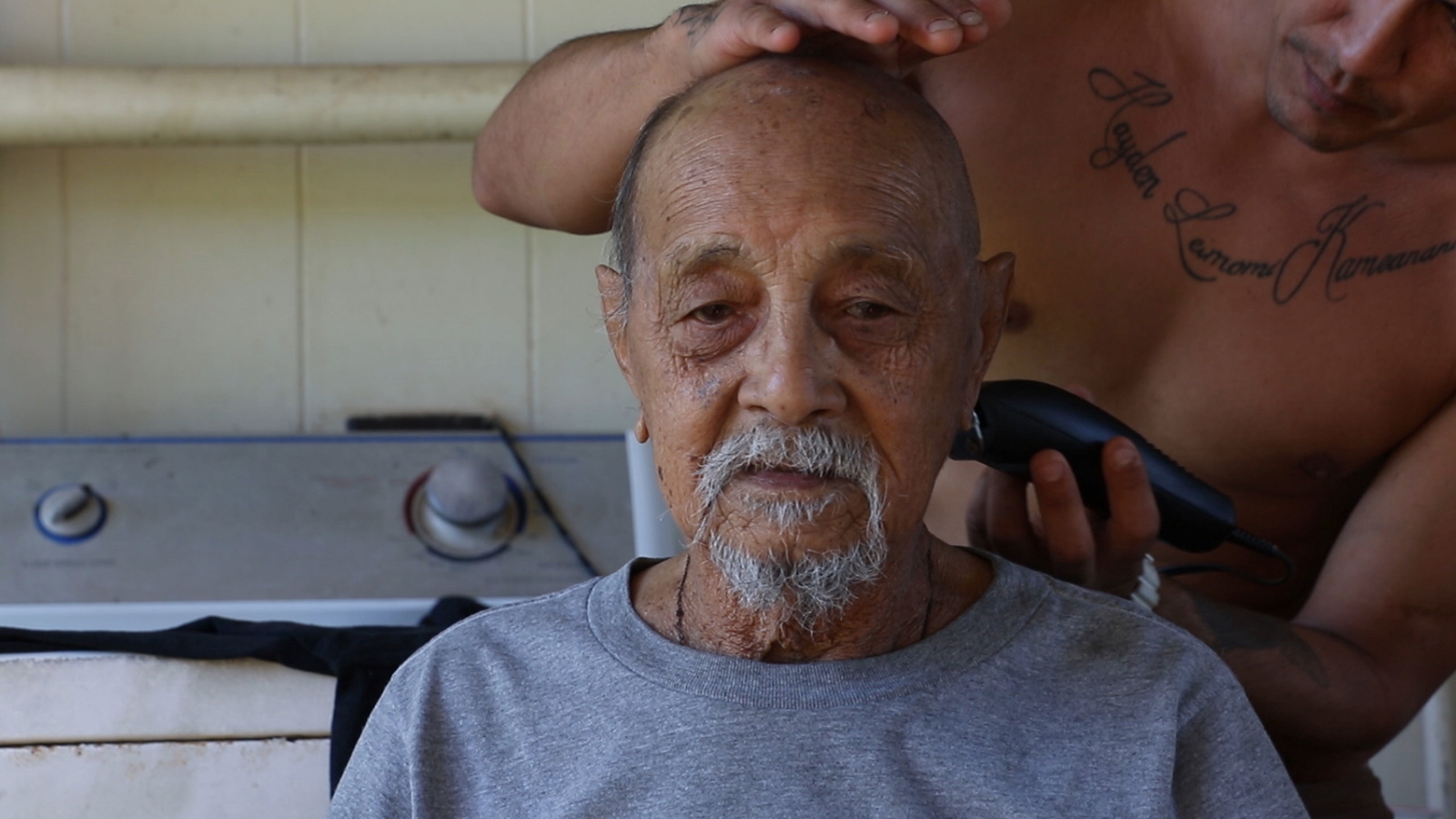 Worker organizing peaked in the New Deal era, recalls Alfred Castillo, the jocular former leader of The International Longshore and Warehouse Union (ILWU) who happens to be Henry’s neighbor. The two reminisce in Cane Fire about strikes and marches, like all-stars remembering their glory days. Thanks to the ILWU’s tireless activism, plantations at last replaced their barrack-like camps with proper worker housing during the ’50s. In one pivotal scene, Cane Fire captures the moment when Henry learns that Alfred moonlighted as an extra in the panned Kevin Costner movie Dragonfly (2002), which he barely seems to remember himself. Hawaii’s labor history looms much larger than its film history—in Alfred and Henry’s minds, at least.

“My great-uncle Henry was a crew member on all of these productions, and it was always something that wasn’t relevant,” reflects Banua-Simon. “A lot of locals used to say, ‘Well I don’t want to watch that movie because it doesn’t have anything to do with my life,’ or they are going to because it’s this beautiful technicolor capturing of beaches that they like or locations that they like. There is something captivating about that.”

Ultimately, Cane Fire unravels how the ILWU’s successful organizing was brought to a sputtering halt by both economic and cultural forces. Castillo and Henry joke that while they used to put the fear of God in management, now the union is “good for shit.” Indeed, this story of the rise of gig, seasonal, and part-time work is a microcosm of what’s happened in the broader U.S. economy. Today, Hawaii has the highest cost of living in the U.S. Gone are the days of modest plantation housing. Instead, charities like Habitat for Humanity gift homes to a lucky few, albeit with the stringent condition that they work forty hours a week on construction.

This economic precarity explains some of the nostalgia for the plantation era, says Banua-Simon. “If there’s a fondness for the plantation from locals, it’s more to do with — there was solidarity because people were together, and people just feel less of that now,” he says. “Even if the conditions were really terrible in the plantation, there was an acknowledgement that a worker would need a minimum of care—child care, hospital… And there were sports teams organized around the plantations, all this stuff. There’s kind of a conflicted nostalgia with even the owners. They would have parties for the workers, Christmas celebrations, so it wasn’t just outright hostility.”

“Now . . . kind of, you’re free to fail on your own,” says Banua-Simon. “Neither system was ideal, but this one is definitely not working.” 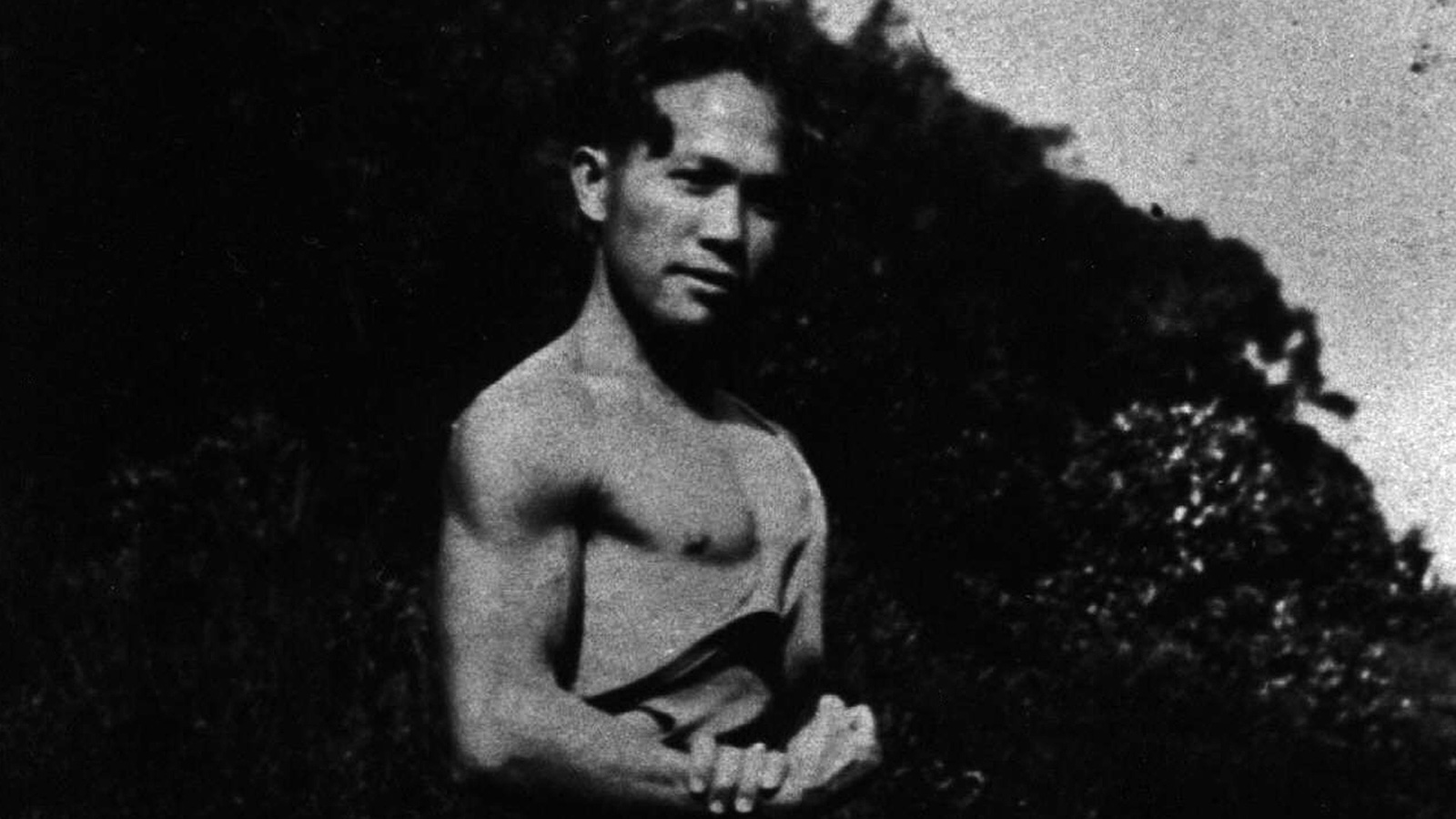 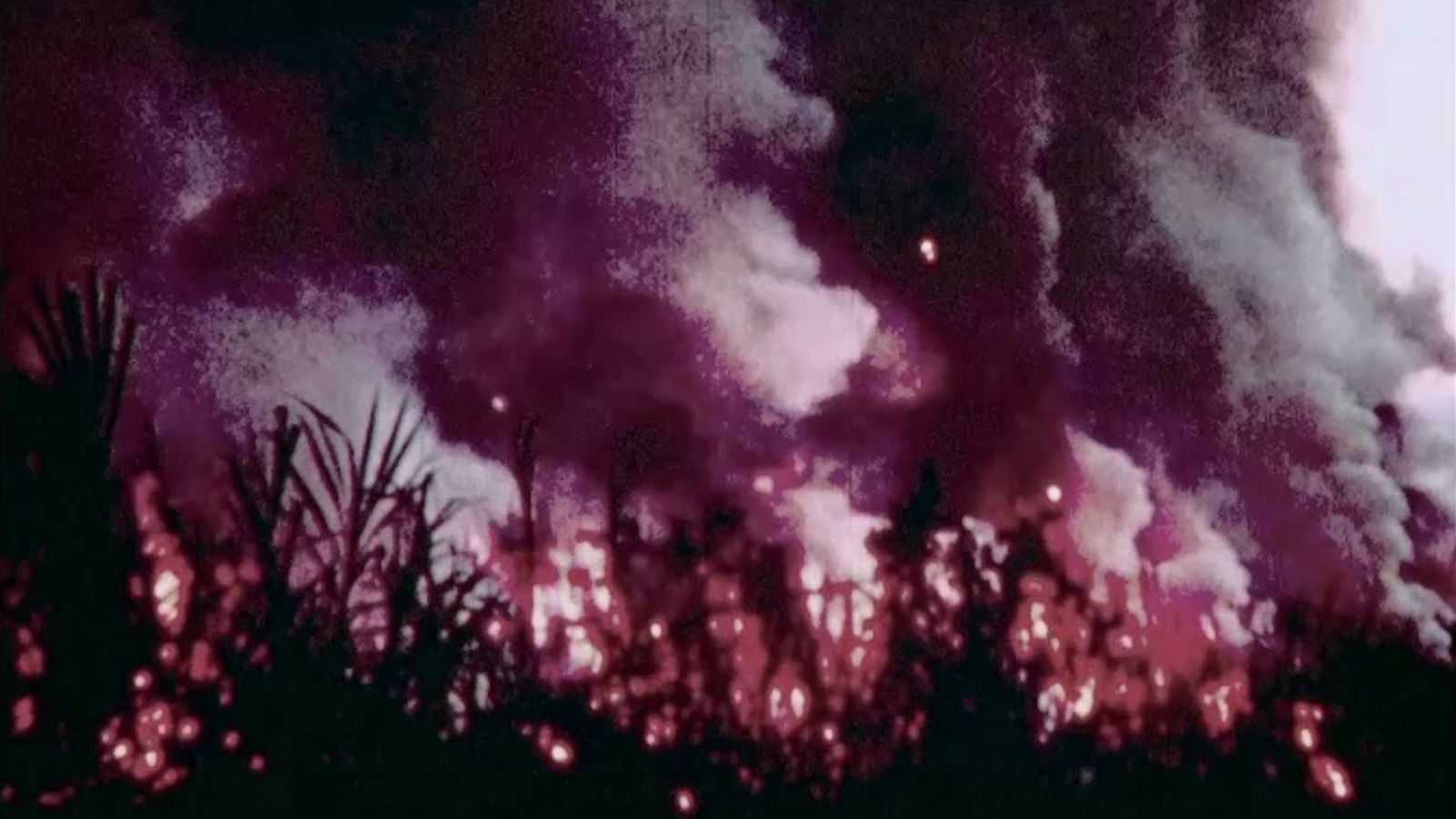 Besides the cold logic of economics, Hollywood also played a role in eroding support for unions. In Big Jim McLain (1952), John Wayne plays a House of Un-American Activities member leading “Operation Pineapple” to sniff out Communist subversion on the island. In a similar vein, the protagonist of Jungle Heat (1957) is a savvy adviser to a plantation owner whose workers are under the spell of a “dedicated rascal.” As Banua-Simon observes, this wild-eyed villain “closely resembled” Pablo Manlapit, the influential Filipino labor leader.

“At first glance, I think it’s obvious to say like, ‘Those [films] used Hawaii as an exotic backdrop, and they’re just a stand-in for some other place,’” he says. “That happens for sure, but I think what was really surprising to me were these films of a certain era where they were really fighting these ideological battles and everything is at the forefront. Looking at the red-baiting Big Jim McLain with John Wayne for example, where he’s this House of Un-American Activities member investigating the labor unions, having this woman of color on screen being like, ‘I used to be a Communist but realized it was a vast conspiracy to enslave the common man” — it blew me away. Organizing felt like a real threat to the establishment.”

This thorny entanglement between the Big 5 and Hollywood persisted beyond the Red Scare era. Indeed, Cane Fire unravels the fascinating ongoing saga of the Coco Palms resort hotel, built in 1954 by sugar heiress Grace Guslander. Famous for her torch lighting ceremony, Guslander pioneered the pseudo-traditional Hawaiian rituals that abound throughout Cane Fire and persist today. Coco Palms closed in 1992 following a hurricane—but guides still lead tours for those eager to stand on the hallowed ground where Elvis filmed Blue Hawaii (1961). The site has attracted developers like Tyler Greene, who intoned at a televised news conference, “It’s the spirit that gravitated and pulled inside of us” while wearing a lei.

Amidst a dizzying array of different interest groups clamoring to be authorities on Hawaiian culture, Banua-Simon observes, “The original concept of Aloha spirit is something but it’s not transactional. When it becomes this dynamic where someone in power is saying, ‘I’m invoking the Aloha spirit,’ it’s a form of soft power. It’s such a vague term that’s used all the time; it’s used twice in the film, by [Kauai Board of Realtors head] Chad Deal and then also by Tyler Greene, ‘The spirit was calling us to make this hotel.’ It’s been so bastardized, it just kind of makes me cringe now, I hear it so many times in media.”

Many locals fiercely oppose redevelopment, though. Cane Fire profiles the group of young activists seeking to preserve the site’s taro patches, koi fish, and other wildlife, as well as its sacred temples and burial grounds. While occupying the site from 2016-2018, they harkened back to the Kingdom of Hawaii while also worrying about Hawaii’s existential future in the face of climate change.

Too often, the default assumption of a welcoming spirit of “Aloha” masks real resentments about the high cost of housing, environmental degradation, depressed union power, and other ills. In cataloging the many iterations of tropes like these, Cane Fire links the earliest Hollywood films with the rhetoric of the wealthy and powerful today.

Banua-Simon’s own family history, too, becomes a ledger record for understanding Hawaii’s transformation since the days of the “South Seas fantasies.” In an exemplary early sequence, Cane Fire hovers on a photo of actors on the set of White Heat (1934), then zooms out to reveal the crew members surrounding them with camera equipment. It’s an apt metaphor for Cane Fire itself, which expands the frame of Hawaii’s history to startling, revelatory effect.

Cane Fire screens at Brooklyn Art Museum from May 20 to June 2 in Brooklyn, NY. It screens at Northwest Film Forum June 4-15 in Seattle, with in-person Q&A on June 4.