Vee Hua 華婷婷6 min read8 months agoAdd comment
Almost immediately after I conclude my interview with Seattle R&B singer Olivia Thomas — who goes by the name LIVt — a crew of people flood into the small basement green room at Barboza. They’re members of the opening bands and behind-the-scenes collaborators from LIVt’s music career at-large, and as quickly as they’ve emerged, the room is full-on pre-funking. Everyone is taking group tequila group shots and riding high in celebratory, anticipatory fashion.
The mood shift is quite the energetic transformation from just the moment prior, when Thomas and I were conversing as she put on her makeup. The color palette pairs vibrantly with her eye-catching, shiny orange puffer jacket and close-cropped pink hair — because after all, the evening’s highly-publicized dress code is themed after her latest single, “Pink and Orange,” featuring Dave Shanaé. Glimpses of the both are everywhere, right on down to the tropical bag of Skittles lying on the table. Color me impressed. 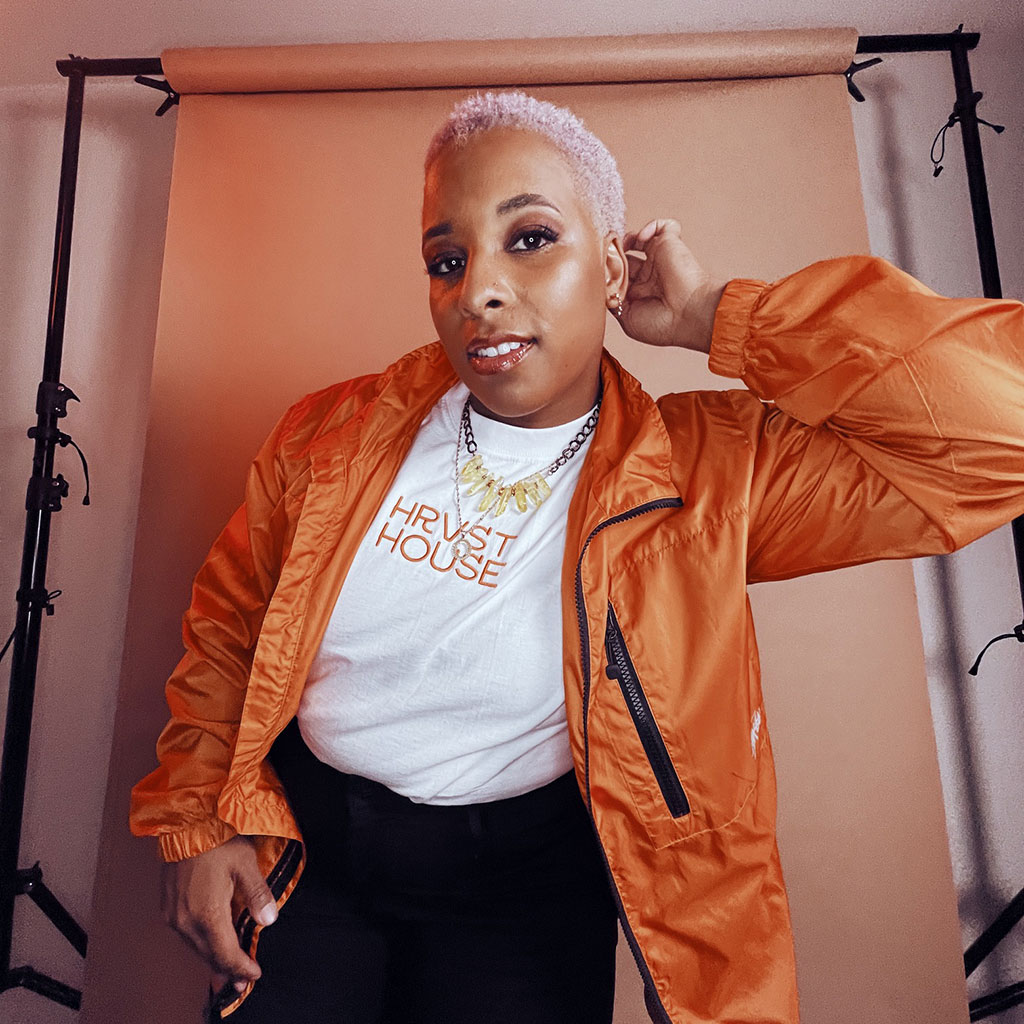 “I’m always trying to show that it’s okay to be who the fuck you want to be, and I feel that I’ve found success in that. I also want to try to empower people; empower other people to do the same thing.” – Olivia Thomas (LIVt) 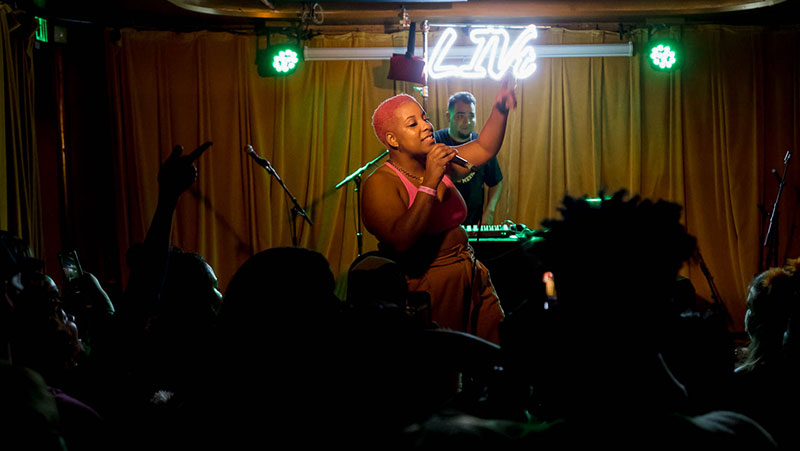 This shift in atmosphere is quite illustrative of what Thomas brings to the stage as an artist. On-stage, moments of pensiveness easily skyrocket into the mood of a raucous house party, yet all of it is tied together with a carefully-curated, intentional aesthetic. Whether it be the dress code or the custom neon sign that boldly reads “LIVt,” everything is playful and expressive. Still, everything bubbles down to one key question Thomas started asking herself at the beginning of her solo career: “How do I be authentic?”

“When I started [going solo], I was like, okay, I gotta… make people care about what I’m saying and what I’m doing. Mostly just starting with being honest, and trying to be relatable,” reflects Thomas. “Anything you hear me say in my music or onstage: that’s legit me. That’s not a persona I’m just putting on… the brand is completely Liv.”

Thomas came to this authenticity after numerous trials and tribulations. She had to learn first-hand that the alternative was remarkably unfulfilling for the type of person that she was.

“I tried to do the other stuff. I tried to have an alter-ego. I tried to be very girly. I did performances in heels. I regret and hate that,” she recalls. “I literally used to perform in high heels, feeling like I needed to be ultra-feminine… [then] I was like: none of this is actually what I want to do.”

Thomas, who studied Music at Washington State University, played in numerous bands prior to becoming a solo artist. Even a stint with a cover band was a fun experience that helped her develop her musical chops — but eventually, it was time to face her internalized fears about being a solo artist. In doing so, she soon discovered that the more she ventured out into the world on her own, the more it became clear that she was moving in the right direction.

What we see today is a LIVt brand that is aesthetically cohesive and energetically high-flying during its live performances. Off-stage, it has also found a strong counterpart in moving images. Thomas, who grew up without adequate access to film and photography resources — despite always being drawn to the mediums — has begun conceptualizing, storyboarding, and executive producing her own music videos. One of her latest, for “Sade to Infinity,” was directed by Bailey Wiliams and drew inspiration from romantic scenes between Rue and Jules on the first season of the TV show Euphoria; it features a candy-colored palette and joyous scenes of Thomas and her partner celebrating their love at various locations across Seattle.

“Sade to Infinity” is a positive song, but it’s kind of dark, because I wrote it right in the midst of [the George Floyd] protests,” says Thomas. “I was feeling like: okay, I’m Black, I’m a woman, I’m queer, there’s a pandemic; there’s just all these existential thing that are a threat. My partner is all the same things, and we’re just like, ‘God, we just want to go to another place, world, dimension, something, to escape everything.’ And that’s what that song is about. Creating our own space.”

“The line says, ‘They might kill us, because that’s what they do,'” Thomas adds, “so it’s like: how do we just enjoy the now?”

“Sade to Infinity” comes from Flowers in the Void, Thomas’ six-track EP, which was completed during the pandemic, and released in late 2020. The album became a form of therapy — a way for Thomas to find “pockets of goodness” despite the turmoil.

“I call it the ‘void’,” she explains, “because we’re in this weird time warp. We don’t know when it’s going to end. Everything feels like it’s six months when it’s only two weeks… I like the imagery of flowers — these good things; these bread crumbs along the way — and that’s kind of what these songs were to me… finding pockets of joy in all of this mayhem. Every song is kind of trying to find a happy place.”

Born and raised in the Pacific Northwest, Thomas draws great inspiration from the region’s sunsets, which are often rich with orange, pink, and purple skies. Lately, much of her music captures the feelings that these sunsets elicit.

Summertime or not, that romantic sunset echo can be found throughout her latest releases, in the form of buttery R&B smoothness. Thomas aligns this evocative aural-visceral feeling to “infinite possibilities of a good time, a good night, a good rest of the day, where you feel kind of like you want to be so present because you want to remember the moment.”

Thomas has even gone as far as testing her own creations for the presence of this feeling. While making “Pink and Orange,” she recalls a moment when she rode around drunk in an Uber, playing the tracks on repeat in her headphones.

“I rolled the windows down, and I was just letting the wind blow, playing the song,” she says, “I was like, ‘This works! This is exactly what this song is supposed to do. It’s a good night, a good time; I feel like anything’s possible.'”

This anecdote circles back to my original moment in the green room with Thomas. LIVt is a full-fledged experience that spans artistic disciplines and, in the most stylish way possible, invites everyone to have a good time.