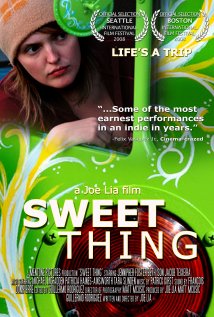 A film written and directed by filmmaker Joe Lia, Sweet Thing is one of the worst movies I have seen in a while. Don’t read ahead unless you want to see spoilers… which shouldn’t be a problem because the movie is definitely not worth watching.What’s amusing is that I knew what this movie was about before I even watched it, despite the summary on the back cover being extremely vague. The film was predictable.

Here is the atrocious plot.

Sweet Thing begins by following the separate stories of two women. Jody has a drug problem and quits her job to sell ice cream out of a sweet-looking neon green Jeep she’d purchased. The other girl, Liz, works at a drive-through coffee shop and one day decides to hit on a ‘graffiti artist’ named Brendan. The two immediately become lovers. Insert random cut scenes of the two running through various parts of Seattle. Insert pathetic attempts at street art. Insert ridiculous scene where the two have an elaborate, unlikely, and very foolish ploy to steal what must’ve only been $5 to $10 of marijuana.

For the summer, the graffiti artist goes home to visit his family. Liz calls him numerous times and he never picks up; he never calls her back either. In the meantime, she is spending a lot of time with Jody, who she happened to make quick friends with after Jody bought coffee from Liz’s coffee stand.

While Liz is working one day, the phone rings. In the next scene, she is at Brendan’s apartment, and she breaks up with him. He doesn’t like it, but there isn’t much he can do.

The two girls continue to hang out with one another, and soon Liz makes a move on Jody, who says that there are too many things about herself that Liz doesn’t know. Liz gets rejected. The two don’t seem to talk again.

At the end of the movie, Liz has gotten back together with Brendan, and the two have just had their first real sex session together. Liz stares off at the rain hitting the windowpanes, and she is clearly unhappy. The end.

Hate to do this to an independent film director — and one based in Washington, at that — but this film is difficult to watch. The character development is poor and the characters were annoying to watch. Liz becomes best buddies with Brendan and Jody in an instant, regardless of the fact that they never really even have intelligible conversations with one another. The portrayal of drug usage is rather over-dramatized and hardly believable; it is akin to the marijuana abuse infomercials that involve teens running over bicyclists in drive-thrus. The list goes on. At least the Pacific Northwest is beautiful, but nice scenery doesn’t save this movie from being terrible. Confused teenage relationships might be interesting topics to explore, but this movie only explores those things on a cursory level.