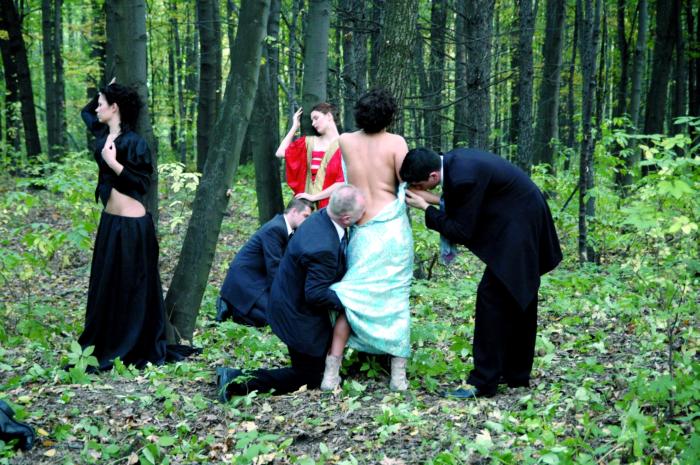 Glass Lips (English translation), or Blood Of A Poet (literal translation), is Lech Majewski’s latest offering for the year 2007. Perhaps it is because I watched Glass Lips back to back with another Majewski film, Roe’s Room, but I found the entire viewing of Glass Lips to be quite painful. I’d been torn in a way that I have never been torn with a movie — the subject matter was interesting enough to make me want to continue watching, but every scene began painfully, with lots of slow panning and shots that seemed to hold no value. Visually, the film provides some well-shot scenes that make watching it at least somewhat entertaining, but the scenes more so slowly that they’d might as well be photographs.

Glass Lips is comprised of a series of shots that tell three separate storylines that are somewhat interwoven. The two main characters are a father and his son, and the mother plays a cursory role. In the beginning of the film, we see the son — who later becomes admitted in a mental institution — being tortured by his parents for misbehaving. Instead of getting a whipping after spilling liquid at the dinner table, he has a belt tied around his neck and is forced to drink his soup like a dog. We later see that the dad is dysfunctional himself, and tortures himself in the same ways that he had once tortured his son. It seems that he is conflicted and feels responsible about the way his son turns out. In the mental institution, the son is actually the most misbehaved of all, and one underlying focus of the movie is on the sexual perversion of each of the characters.

I wish that a focus on strange behaviors alone would be able to save this movie from being a bit tiresome, but simply throwing in a slew of characters who are in a mental institution does not propel this movie to new proportions. In some ways, however, the film is worth watching; it is clear that Majewski has a keen eye for art direction.

Still seems interesting enough to watch besides the minor problems mentioned. Where can i get a hold of that?