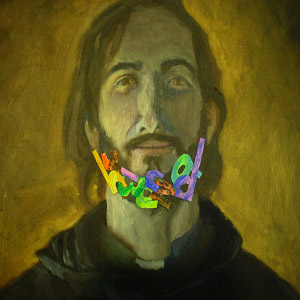 In a feat that must be applauded, Dean Woods’ new release, Ahhhmend, manages to create a sound that might simultaneously have come from a simpler, naive past and a distant and sophisticated future. These are beautiful songs that, in an elemental move that is reminiscent in some part of the Beach Boys and Phil Spector, envelop the listener with waves of reverb and delay, creating a Dean Universe (a Deaniverse if you like) from which you do not wish to escape.

The album is billed as a fantasy on the Rack and Ruin Records website,and we are told the mysterious sounds achieved by Woods are created on what is called a vibrational vortex machine; listening to tracks such as Tonio or Connecticut Rvyr, one can imagine the creator of these tunes sitting in front of wheezing, valve and tube ridden machinery, pulling levers and pumping foot-pedals, as he conjures his music. This is a music of processes and processing, yet, for all the torturing and manipulation of samples, to a point where they are no longer resemble what they once were, what results is intensely human and intimate music.

While the beautiful, melodic vocals are much further forward in the mix than on previous Woods’ releases, it is still difficult to catch all the lyrics. This, however, only serves to add mystery to the songs, as our imaginations are captured and curiosities tweaked by those few floating lines we can discern. It has been written that Woods’ songs are informed by the artist’s upper-middle class Boston upbringing, by heartbreak and by a constant desire to escape by using drugs and alcohol, and there is no doubt that this is an album of yearning and longing. But that aside, this album contains well thought out twists and humorous turns that are the hallmark of good songwriting. From those lyrics that don’t disappear into the reverb ethers it is possible to detect this subtle wit, with a playful flipping and twisting of meanings; a pleasure at laying a lyrical and musical trail, only to contradict assumptions that have been made.

In listening to this album I would not try and concentrate too hard on deciphering the words; the meaning will become apparent, as if whispered in your ear, anyway. Instead, simply allow the amazing sounds wash over you and carry you off; you might just wake up in a field somewhere in Massachusetts with the strange feeling that you were just abducted by aliens, but it will be worth it.