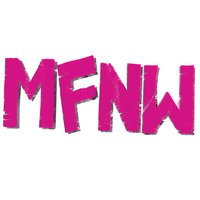 Prior to watching Om, I had absolutely no idea what kind of band they were. Imagine my surprise, then, when the San Francisco-based doom metal trio turned out to be one of my favorite Musicfest NW performances! Especially because I’d compare watching Om to watching your friends playing music in the living room — only… your friends have no idea you’re actually alive, or if they do, they simply don’t care.

Strange as this may sound, this level of disconnection from the audience actually works for Om. Whether vocalist and bassist Al Cisneros is grooving like he’s in another plane of existence or making bass faces like none other, or the band as a whole is standing around dramatically and nearly silently between songs, Om seems to be right at home on stage — with home being a hypothetical place that makes even a posh venue like Doug Fir Lounge feel like a dingy basement in which friends hang out, get high, and zone out. And frankly, with the droning ferocity of the bass — which overpowers everything, really — it doesn’t particularly matter that you’re connected to Om, as people, either. What matters is being connected to the completely dominating and enveloping music which you’re left simultaneously listening to and meditating to. – VIVIAN HUA

Explosions In The Sky

Listening to Explosions in the Sky live is like watching the ocean. Parts are serene and soothing, as the Austin quartet takes you on a melodic journey through the beauty of high strumming guitars and chords. Other parts are raging, stormy explosions of noise, distortion, anger, and intensity. Musicfest NW in Portland landed a great gig in the post-rock rockers from Texas. Although the festival started on Wednesday night (with only one show), Thursday night was the big starter. And what better band to start it with? Explosions In the Sky brought its fierce and beautiful sounds to a packed crowd in the Crystal Ballroom.

Outside of the Sasquatch Festival this year, EITS haven’t been to the Pacific Northwest in around two and half years. The band also hasn’t released any new albums in said time. With that in mind, the audience was treated to a fantastic set spanning all five albums from the Texan post-rockers. Guitarists Munaf Rayani, Mark Smith, and Michael James lulled the crowd to sleep with the melodies of “A Song For Our Fathers” before blasting back behind the furious drumming of Chris Hrasky with songs like “The Birth and Death of the Day”. For 75 minutes, you were trapped on a boat and EITS was Poseidon, seeing to do fit with whatever he wanted, be that melodies or distortion destruction. Each song flowed from one to the next, with the more astute and eager audience members able to muster a cheer of recognition from the single pluck of a guitar screen. Half the fun was trying to prepare yourself for which song was coming next amongst the mix of distorted and melodic transitions EITS employed. Instrumental music live, when done right, is entrancing. To speak emotions without words is impressive, and no band is better at it then EITS.

To be big out of Austin is tough. There is a lot of music down there, and seemingly every band that does hit it big does so by the power of its live show. EITS is no different. But Rayani and Smith are prone to sitting down, tinkering with toys for minutes on end, leaving the quartet suddenly looking like an incredibly talented duo of James and Hrasky. Such things can be avoided if the stage were maybe 10 feet in the air at a downward slant, but most aren’t. Although the tweaking of knobs was probably necessary for the output achieved, it was unfortunate that even the tallest of individuals couldn’t really see what was going on. Also unfortunate is that many post-rock instrumental groups require your attention to the detail of what they are playing as much as how they are playing. For those that aren’t completely engrossed, it is quite easy to have the mind wander, and a good portion of the crowd at the Crystal Ballroom did exactly that. The enormous bar area (which was just as packed as the all-ages section) had a rather large peanut gallery of noise, and when the band was absolutely slaying with the energetically rocking sections of songs, it was no big deal. But EITS shines best in its melodies, and many of those became intertwined with the yelling of individuals over each other and the music.

Final issue, and this is just a personal one. But two and a half years ago, EITS played “A Poor Man’s Memory” live, and it still stands to this day as one of the top five songs I have ever witnessed. I was eager for a repeat, but I didn’t get it. So I guess the memory lives on in my own mind, fitting, for the instrumentals the band plays are powerful enough to achieve such status. – PETER WOODBURN

In my mind, the best part of the festival is witnessing a band you’ve never heard of perform. So, on the recommendation of my friend, I decided to go to the tiny, dank surroundings of Satyricon to witness the Los Angeles, California grind/thrash band, Crom.

I’m usually not the biggest supporter of the grindcore genre. It is quite unsettling, but when the monster breakdowns hit, they can generally make up for half the damage the song had been inflicting up until that point. But Crom turned out to be much more pleasant than your average grindcore band. The antics of Crom, in all of their abrasive, vile natures, turned out to be quite humorous.

This is largely based on the band’s stage banter. One guitarist was saying, “Thank you so much for coming out,” after every song, while the lead singer Will Helphin made it his personal mission to insult every member of the audience. Most of what he said cannot be reprinted for good taste’s sake, but the banter was rather sexist and misogynistic overall. But the juxtaposition of the intensity of the grind/thrash sounds pummeling your ears with the absolute hilarity, albeit -– absolutely disgusting shock hilarity — of Helphin’s banter had me laughing non-stop.

Crom is just one of those bands you have to see for yourself, just once. Then make your own decisions. – PETER WOODBURN