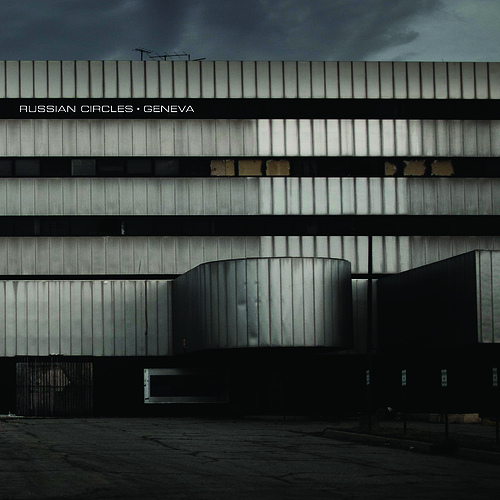 The instrumental, post-rock landscape is a bit crowded as of late. But in just three albums, the Chicago/Seattle trio Russian Circles have cemented themselves at the top, and this fact is readily apparent in their fantastic new album, Geneva.

Russian Circles have always bounced between the moments that recall sunshine and the moments that recall audio armageddon. The issue up to this point has been how to balance the serene with the surrounding apocalyptic, sludgy tones that tear it all down. Geneva sludges across with “Fathom,” and right from the get-go, the now cemented new bassist Brian Cook makes his presence known. Cook is no stranger to the mastery of the low-end, as his previous work with Botch and These Arms Are Snakes would suggest. But “Fathom” chugs along largely to his own beat. Guitarist Mike Sullivan peppers eerie riffs over it all and drummer Dave Turncrantz pounds away majestically. But seemingly, it is Cook who is finally brings it all together.

As Russian Circle flexes their noisy chops on the title track, a melodic soundscape gives way to a dreary, industrial, grimy barrage of rock. The drums are loud, the bass louder, and the guitars screech over the top of it all. Despite having just three members, Russian Circles have always sounded like they’ve had at least four — maybe five. With Geneva, the band has truly found the ebbs and the flows of the mountains and valleys that come with the instrumental realm. The peaks are taller, the valleys more sunken, and either/or takes even longer to get to. But in the end, the view from the top is fantastic and the tumble down just as exciting.

“Hexed All” is really the only faltering point on Geneva. With the inclusion of a cello and a violin, the sound is painstakingly beautiful and soothing. But with the majority of the music being loud and violent, the juxtaposition is rather unnecessary. At times it is a welcome change, but as the intro of “Melee” shows, it isn’t required to completely hand over a song to melody.

The growth that Russian Circles have exhibited in their brief existence is shocking. Geneva showcases a band that has fully come aware what their sound is capable of. Now the real challenge comes to building upon that sound in new and interesting ways, and not to pigeonhole themselves as just another band without vocals. Something tells me that in the future, Russian Circles will have no problem doing that.