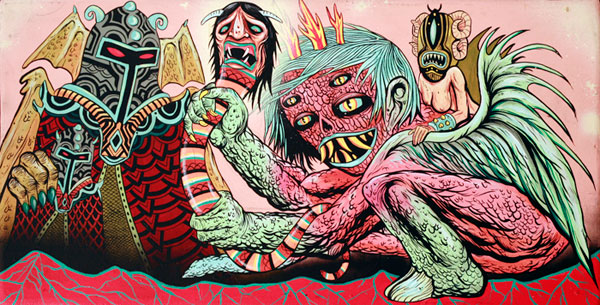 Skinner’s Solo Show At The 111 Minna In San Francisco! With a style that embraces creatures as well as tribal influences and sophisticated patterns, Skinner is an artist who truly knows his style, yet never becomes boring. Skinner’s pieces, which feature everything from helmeted guards to reptilian creatures and evil castles with faces, might remind you of a nerd’s favorite fantasy book by description, but that is as far as the comparison goes. His illustrated works do indeed hint at a world of marvel and mystery beyond human eyes, but they do so in a way that is exploding with color, similar to a carefully-controlled psychedelic trip. Things as simple as houses, when turned out by Skinner, become intricate, geometrically-lined portals into starry universes.

On Thursday June 4th, starting at 6:00pm, the 111 Minna Gallery in San Francisco will house a solo show of Skinner’s works. Entitled Worship Thee Kindly The Dark Hand That Guides Me, the exhibit will run until June 27th and will be Skinner’s first major solo show, believe it or not. It promises to be an EPIC show with lots and lots of titles that are suitable for metal songs. So epic, in fact, that they even use the word epic on the flyer, to describe the gorgeous installations that are bound to happen. Go view them for yourselves.