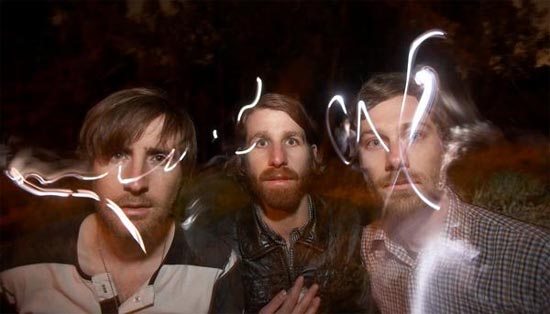 “A lot of the new record is our reflectance on the kid’s dream of rock n’ roll versus the reality of it, in the experiences that we had.” — Warren Woodward

Creative undertakings often raise conflicts of interest in the hearts of those who undertake them. Does one take the route of compromising one’s artistic vision — even if ever-so-slightly — for a monetarily-stable living, or does one take the route of creating exactly what one desires, even if it potentially means exposure to only a handful of appreciative individuals? The Valley Arena may have just released their third album in five and a half years, but the aforementioned struggle is one that they are still dealing with. Their new album, aptly titled We Died, echoes the band’s sentiments of potentially calling it quits; it touches upon their collective frustrations with the music industry and skepticism with their uncertain place within it.

“I feel it’s about having fun, [but] when I listen to the record, I admit… a lot of it sounds really depressing. A lot of the new record is our reflectance on the kid’s dream of rock n’ roll versus the reality of it, in the experiences that we had,” says lead vocalist Warren Woodward.

Without record industry pressure or timelines imposed on them by anyone other than themselves, TVA were able to write and record We Died at their own pace and choose to involve as few individuals as possible. They absolutely wanted to curtail another incident of “the curse of The Valley Arena” — a phenomenon that has happened to them three times already and involves being signed to record labels that go out of business before their disc is ever released. But more than anything, they knew that they did not want a repeat of the experience they had with their second album, Sesso.Vita.

“For any young band, when you get that first taste of someone wanting to release your record or fund your tours,” says Woodward, “it’s exciting, but it also kind of poisons things. That’s part of why the second album was so tense for us and [was] not a fun process to make. I like our second record, but… at that time, we were kind of caught up in the, ‘We’ve gotta make smart choices, and do this right, and quote unquote make it [mentality].”

“Making it” is no doubt the goal of many bands, but The Valley Arena found that pursuing that dream led to many, many disappointments and letdowns. The band felt harmed by formalities within the music industry, and stress began to take its toll on the foursome, eventually becoming so great that their former bassist left the band while they were touring for Sesso.Vita.

“There were both personal reasons and things going on with the band that made him leave at the time,” Woodward recalls, “[but] obviously, things aren’t going great in a band if someone leaves, especially if it’s in the middle of the tour.”

The departure of their bassist served as a catalyst for the band’s new musical approach — one that cuts out expectations and eliminates frustrations as much as possible. That, for The Valley Arena, means a DIY mentality and a hard look at their reasons for playing music together to begin with.

“The whole goal of this record was to see if we could do it as three friends together, and do a 180 on anything that was causing tension or causing fights or making it a bad time before,” reveals Woodward. “The last record was like having every song go through a meat grinder… there was extreme scrutiny on every song and fighting and seeing if it could make it through the gauntlet of our criticisms. For [We Died], we were meticulous on a couple of them, but there were songs we kind of wrote in a night where we were like, ‘Hey, that’s really simple and really good; let’s just leave it that way.’ A lot less second-guessing this time.”

We Died begins with a lo-fi, relatively airy track, “The Dig,” which sounds dynamically different from other TVA songs. Although slightly strange, anything that felt right to the band, regardless of whether it was what they usually sounded like or not, was fair game for this album. And despite the band’s pessimistic and minimalistic approach to the writing and recording of this album, they’ve managed to put together a cohesive release that serves as an appropriate third chapter for them. In stark contrast with their previous albums, though, We Died took less time to write, involved less outside input, and cost less money. The band relied on themselves a great deal more for this disc, and hence, took the liberty of centering the album around themselves as well.

“It’s the record that’s about us,” says Woodward. “I think the other records had themes, and this record is just about us.”

Selfish as that may sound, Woodward maintains that writing music is generally a selfish pursuit for all musicians, and on what may be the band’s last album ever, they simply wanted to indulge in themselves and their story. And strangely, despite the band’s low expectations for the album, writing and recording We Died has proven to be one of the band’s most enjoyable ventures to date, because they shed all their worries and simply embraced their love of playing music together. They were able to give the record their all, because despite the fact that the fate of The Valley Arena is not yet set in stone, the band approached the creation of the album as though they already knew.

“When writing this [album], I kind of was looking at [it] as kind of our exit interview as a band…” says Woodward. “There’s a growing sense of the death of the indie rock band as we knew it when we got into bands and became really passionate about trying to give [music] our all. [Live music] has kind of splintered off into… the pure art scene of bands and then the huge festival Warped Tour scene of bands, and the divide has just gotten bigger and bigger. We were always somewhere in the middle. At the time that we started, it felt like there were other bands in that middle ground, and it feels like that has kind of disappeared. So, We Died is kind of like we’re feeling like we’re the last bastions of that particular niche.”

In a way, it makes sense, although TVA are really not alone in this particular niche. There are handfuls of bands throughout the country and beyond that put out solid, thoughtful records, yet are never really heard by the general population. As the music industry has become more and more saturated with musicians, bands that don’t fit easily into one box or another simply fall between the cracks. With their blend of angular indie rock and raucous post-punk, The Valley Arena is just one example of a band that’s not easy to classify, and their fanbase is difficult to define as well.

“It’s always been so difficult [for us] to find a scene of music… I guess we’re just something without a premade audience because it lies so much in-between you know? [Our music is] not eclectic or outside of the box enough for the total art scene, but it’s definitely not mainstream, either,” Woodward muses.

With this album, The Valley Arena will take a more grassroots approach than in the past, when they’d hired publicists and worked feverishly with record labels to promote their albums. This time around, they will take control of nearly everything, including their publicity, promotions, and booking. They’re joint-releasing the album independently on a friend’s label, Jaxart Records, and the only physical copies of We Died will be available on hand-numbered 7″ records for which they’ve personally hand-folded the sleeves. TVA has simply decided that what’s important is having their music be heard, however that may happen — whether it be through giving away digital downloads of their music to concertgoers or personally contacting smaller publications they may have previously overlooked.

“I’m always surprised if I’m bored and Google the band’s name, at the number of blogs and magazines I’ve never even heard of liked one of the records,” Woodward states. “Meanwhile, you spend so much effort trying to get it accepted in more traditional, larger outlets, and not really paying much attention to those who really like your record and will do the most to support you, you know? Through the years, you work with labels and managers and publicists… and you kind of forget the fact that you can talk to these guys directly. Our whole strategy for promoting this album is going direct and doing it all with friends and people we’ve met along the way.”

Bands regularly change styles from album to album, but for The Valley Arena, the shift between Sesso.Vita and We Died has been absolutely huge – perhaps more conceptually than stylistically. We Died gets back down to the nitty gritty of TVA and feels to them like the early days when they first started writing music together. And although those joys may have faded or become warped throughout the years, We Died revitalizes them, even despite its bleak title.