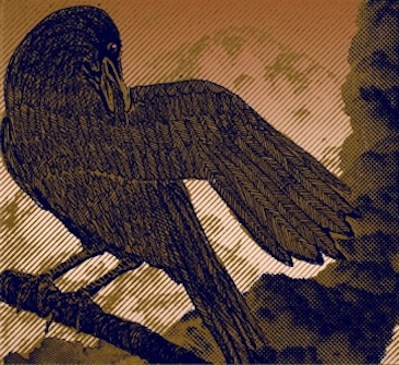 Listening to Mommy Crow gives the feeling of awaking into a dream. Thick with atmosphere, chimes and bells sprinkle in like cold rain, haunted with spoken clips. Vocalist Elise Percy toys with languid syllables, her voice drifting over finger-plucked guitars, rustling percussion, and liquid cello.

Bird chirping lures you into this thoughtful album. Delicately crafted songs take your hand and lead you through churchyards, past water towers, and into a cerebral intimacy. Murmurs and rattlings skirt the tracks like lace, letting them flow into one another.

Percy has found a way of merging her fascination with philosophy and psychology with into her musical endeavors. Her lyrics are bouquets of imagery, pensively romantic, and with a sigh of loneliness. “Gone are the thoughts of sparrows,” echoes a spoken clip from philosopher John Passmore, speaking about John Hume & causation, as guest cellist Travis Jeffords massages your musing with his cello.

The album is reminiscent of dream pop like that of Mazzy Star, with times where the vocals ring out much like contemporary Bjork-inspired singers such Natasha Khan of as Bat for Lashes would. e.p. hall have emerged from Bloomington, Indiana, bringing with them familiar, mid-Midwestern foreboding and sleepy swirls of darkness. The breathy lonesomeness and eerie fragility of Mommy Crow perfectly accompanies taking a chilly walk in a cemetary, reading a favorite novel, or lounging in your bedroom with eyes closed as you drift into the melodies.

By the end, you feel like the “white ghost” Percy admits to resembling in “Ladders and Mirrors,” and you’re curious to dream again.