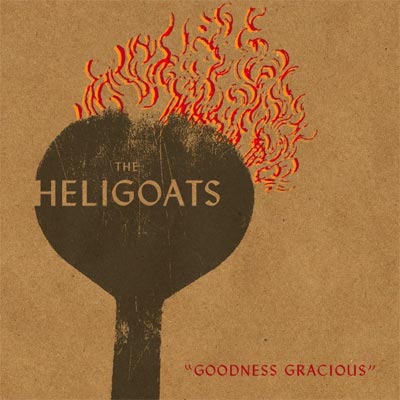 One-man bands usually call to mind images of a comical minstrel barely standing under the weight of a drum-and-harmonica contraption and self-penned songs that probably belong in a sideshow rather than on a CD. But Chris Otepka, the indie rock artist from Illinois performing under the name the Heligoats, cleverly avoids such assumptions on his latest album Goodness Gracious, wielding quirky songwriting with a distinct, undaunted rock style.

It’s easy to lose Otepka’s latest solo project — a follow up to last year’s EP, The End of All Purpose — in an overwhelming sea of stark indie rock, but his style of using quixotic swells to set up each song as a climactic story creates a noticeable hook. With experience from producing three albums with his former band, Troubled Hubble, Otekpa knows how to merge multiple, contrasting emotions together in an alternative sound that transcends mere love poems, moping ballads, or triumphant anthems. Stringing together various notes that surprise even the most faithful indie connoisseur, The Heligoats’ melding of major and minor keys produces a graceful yet catchy sound.

Usually starting off with a simple acoustic guitar overture, each track transitions into a heroic tale complete with cymbal crashes and drumming segments. Currently on an extended national tour with Clem Snide, Otepka’s newest venture, with its intrepid rhythms and harmonies aimed to reintroduce anachronistic qualities back into contemporary indie folk. “Water Towers On Fire” starts off with an acoustic rift that segues into a unique bongo-inspired beat that carries along Otepka’s soulful vocalizations, almost like an unobtrusive metronome.

Instrumental breaks throughout the tracks appear to be his go-to shake up to keep his poetry from becoming too boring, but even without them, Otepka’s songwriting prowess makes itself evident. An instrumental interlude of crashing ocean waters washes over in the middle of the album like a refreshing tidal spray, giving the second half of the album a clean slate for songwriting exploration. Singing of insects and sneezes in “Heat Vents” somehow makes sense as we’re taken into Otepka’s strangely welcoming psyche. And when he reveals bits of himself in the last title track with, “It was an interesting angle to be laying with you/ Say we’re on the same page when you say I should be singing your praises/ Anxiously waiting for the next note you play me,” the gentle authenticity adds a conclusion to the previous songs that linger sentimentally.

Even though Otepka manages to create an album full of surprises and diversity, he nevertheless keeps it thematic by linking each song through an original voice, a heroic style, and idiosyncratic melodies. Beginning and ending with a light guitar, the collection of songs encompasses a perfectly soulful, indie mélange. Somehow, Otepka’s use of blaring beats and raucous sounds throughout Goodness Gracious still produces a soft, sensitive album that testifies to his understanding of human complexities.

Written by
Add comment
post harbor. – They can’t hurt you if you don’t believe in them. Album Review
Citay – Dream Get Together Album Review
wpDiscuz
0
0
Would love your thoughts, please comment.x
()
x
| Reply