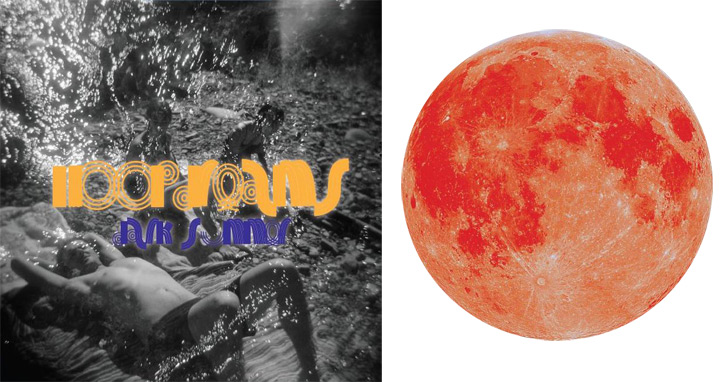 Hand-picked video artists were invited to give their interpretations for HOOPDREAMS’ short track, “Spirit Momentum,” in this abstract motion art gallery.

Featuring two members of the indie psych pop band Nurses, HOOPDREAMS is the result of three multi-instrumentalists from the Pacific Northwest loosening their reins on traditional songwriting. Dub-influenced beats, layered vocals spanning multiple octaves of harmony, and mysterious electronic noises are explored to evoke vaguely familiar feelings of nostalgia that rest densely upon the human psyche. DARKSUMMER has recently been remastered for Baltimore record label Dymaxion Groove, which will release the album on a limited-edition, red, full moon picture disc (seen below), so that everyone on this great big floating ball of ours can get their hands on a copy, starting July 15th, 2012.

To introduce listeners to this release, we’re featuring seven of the best videos for the short track “Spirit Momentum,” which were created in conjunction with REDEFINE’s interdisciplinary show MMMicrofestival. Hand-picked video artists were invited to give their interpretations for HOOPDREAMS’ short track, and they are showcased in this unique abstract motion art gallery.

See full artwork and stream the entirety of DARKSUMMER at the bottom of this post.

Illustrator and video editor Daniel Cantrell has quite the brilliantly deranged sense of humor, as you’ll see from this mash-up video (complete with custom sounds, alien eyes, and social commentary)!

As curator of the video series, I took a valiant stab at interpreting this track using old biology videos and very intensive, sound cue-heavy editing.

Well-known and well-reputed glitch artist Evan Meaney graces us with his colorful presence, providing a change of place with a uniquely abstract contribution.

Chicago-by-way-of-Portland video artist Jesse Malmed loves neon and engaging his audience with social mind trickery. This is one tiny but intense look into those tendencies.

Scott Amos of Oily Films was invited to create a video for reasons of synchronistic humor. His choice of titling his film projects under the name of Oily Films aligned with the fact that the members of HOOPDREAMS frequently used the adjective “oily” to describe anything in the upper eschelon of awesomeness. It is highly recommended that you full-screen this and step back. Though the video may seem initially like text-based noise, there is some semblance of order here that really works well with the music.