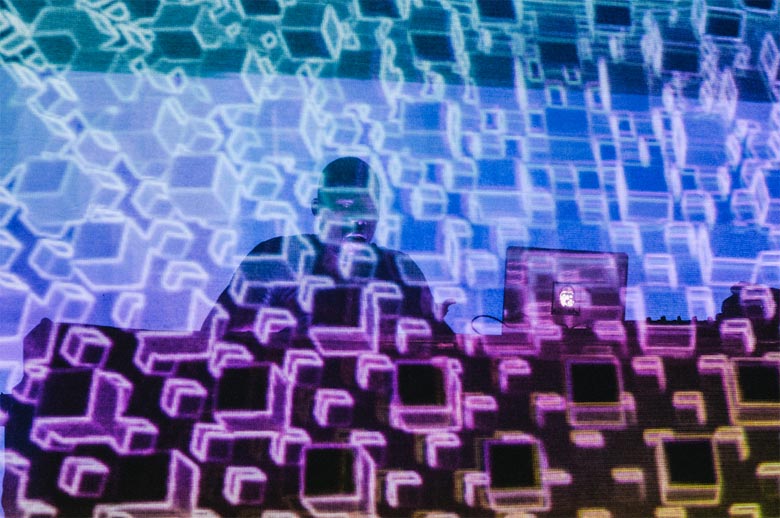 “I think as we get older, that idea of magic is just taken from us. There’s just less of it and less of it… I really try to just kind of dabble in things that feel magical.” — Steve Ellison of Flying Lotus 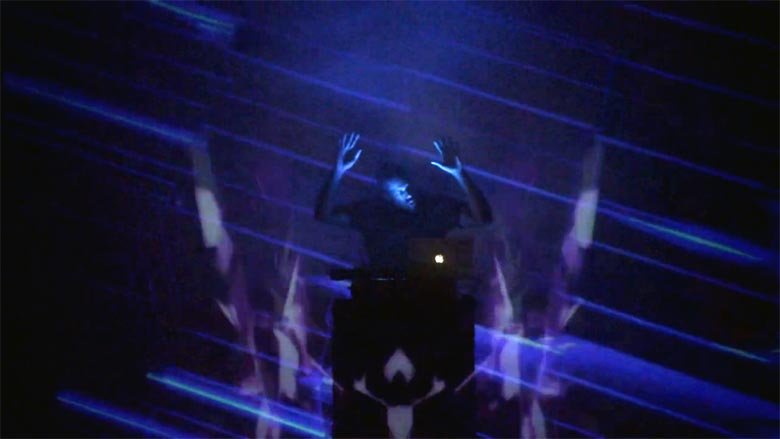 Watching a singular man or woman perform behind a stack of electronic equipment can sometimes really fail to really pull the heartstrings; it’s easy for a showgoer to disconnect when there’s a lack of connection between musical output and the actions a performer is making onstage. To combat this, electronic musicians have, in recent times, turned to innovation in the multimedia sphere to add an extra bit of oomph to their live sets.

On Flying Lotus‘ latest tour for Until The Quiet Comes, he worked with long-time friends and animators to create Layer 3, a one-of-a-kind audio-visual experience that takes showgoers through three-dimensional worlds of tunnels, silly cartoons, metaphysical imagery, and biological forms.

But more on that later, for his set with Thundercat had much more to offer than just a visual experience; it possessed a massive amount of novelty all-around.

“I think as we get older, that idea of magic is just taken from us. There’s just less of it and less of it… I really try to just kind of dabble in things that feel magical.” — Steve Ellison of Flying Lotus

As though seeing Flying Lotus wasn’t satisfying enough, Thundercat, who have an upcoming record on Flying Lotus’ Brainfeeder label in July, proved themselves to be the biggest spectacle of sheer awesomeness that I have seen in a long time. On record, Thundercat’s brand of jazz stylings can be erratic and wide-flowing, but hardly ever elevate into shredriffic territory that a metal enthuiast would find compelling. It’s fairly restrained, sometimes feeling sexy and sultry even when it contains more upbeat elements. In person, however, Thundercat is another fucking story. A ridiculous one.

Let me start off by saying — perhaps blasphemously to some — that I kind of hate unstructured jazz music. Something about the way it meshes with my brain just results in the feeling of insanity, and not necessarily in a good way. Thundercat’s live show is not something I would ever choose to listen to if I were doing anything other than watching them live, which might even be why their recordings sound so different from their live shows. Nonetheless: watching them live is incredible, and something I would highly recommend anyone to do.

Though I usually like to embed live videos to show readers what they’re in for, I’m going to pass on this occasion because I don’t think a video would really do Thundercat’s playful music mastery much justice. We’re talking shreddy bass faces galore and a virtuoso on keys splitting his time between two synths and an organ, like a nimble Shiva with multiple arms. Together, they shred up and down every scale imaginable and in the jazzy spaces in-between, filled in by flourishing drum fills and unpredictable rhythms that would adequately satisfy any drum nerd. They create sounds for diverse settings, suitable for an intimate club smelling of sex and cigarettes; soundtracks for epic video games; bizarre intros to television shows (Thundercats, perhaps?); space exploration in a universe that ricochets from crash cymbal to crash cymbal. This trio is fucking over-the-top, dishing out extremity on all fronts, as though they intend wholly to dumbfound audiences with their impenetrable wall of pummeling funk-jazz goodness.

Indeed, Thundercat could easily be a headlining act, and folks would never stop blubbering about them. How was a one-person electronic act going to manage to top this?

“I can add moments that are synced up to the visuals if we want it to, and that idea is really fun for me, because I’m really into the idea of the show feeling very cinematic, but still very danceable.” — Steve Ellison of Flying Lotus

Luckily, Flying Lotus, aka Steve Ellison, has enough skills and tricks up his sleeve — dude has a LOT of tricks — that he’s not just lying in the dark as the boring solo electronic musician closing out the night. And surely Ellison was quite aware of this fact, for no one in his right mind would bring the party after Thundercat brought the funk, unless he knew exactly the high value of what he had to offer.

A bill like this is genius. It allows disparate music groups to twitch their way into your ruddy world, and somehow it’s totally cool. The jazz drummer, R&B vocalist, synth master are just at home alongside the visually-evocative and tripped-out sounds of Flying Lotus. The continuity here lies in the performers’ abilities, really. What I can appreciate about Flying Lotus’ set, though, in contrast to Thundercat’s, is his ability to entertain without much wankery at all. Despite having blown up to take over the entire sonic world comprising people of all demographics from their 20s to mid-30s, Flying Lotus has managed to stay honest. Not that Thundercat aren’t — but Flying Lotus’ approach is just singularly unique. In Vancouver BC, a friend saw him boarding his tour bus with a box of action figures. He still likes cartoons, and he raps about Batman on stage. He finds it completely appropriate to joke about needing to fart, poop, pee, and puke after or during a long set. This guy is real… and real nerdy… and it seems clear that nothing is scripted from night-to-night. His realness allows for his sets to warp (pun?) and mutate according to the crowd’s reaction on any given night — and while that is the mark of any good DJ, Flying Lotus is an expert at this artform. This particular evening in Portland, the crowd was ready to party, and as a result, the set was extremely hip-hop and dance-oriented, with Ellison performing quite a few songs from his new rap project Captain Murphy. By contrast, the previous night in Vancouver was much more mellow, featuring more content from ambient worlds and Until The Quiet Comes.

Add all this to the eternal mystery of how Flying Lotus is now huge, despite the fact that his music is fairly inaccessible — and that he overtly sings about DMT all of the time, and you have a fair mystery on your hands. This evening, for example, featured “DMT Song” performed in at least three versions, two of which included the crowd chanting “D-M-T”, though I would suspect most have no idea what those letters mean. And all of these experiments and fascinations just build up a Flying Lotus show as one of the most joyous and sociologically-fascinating events I have beheld in quite a while. Everyone was on the same page of good vibes, ready to dance, scream, and laugh — hanging on not only every beat, but every word out of Ellison’s mouth. A rarity.

But lastly, let’s talk about his Layer 3 visuals, which are really and literally a sight to behold.

The three-layer visual setup is comprised of two projection screens and two VJ’s in the front and back, while Ellison performs in the middle and occasionally “interacts” with the visuals around him. The VJs, John King and Ellison’s long-time collaborator and friend Strangeloop, work simultaneously alongside him to create dynamic and completely spontaneous, real-time imagery for his sounds. These visuals, featuring some of the subject matter I’d mentioned before, succeed in transporting viewers to hypnotic worlds without negatively influencing their desires to dance. And from a technical standpoint, they have wide implications for the future — again, due to their lack of wankery and their honesty. The technology employed by Ellison is not as intimidating as that of those used by people like Skrillex, Deadmau5, or Amon Tobin, who have extremely large-scale three-dimensional structures that undoubtedly require huge rigs to transport. Layer 3 mimics three-dimensionality and does so via relatively accessible means. Presumably, anyone with video know-how and multiple projectors can recreate this on some level; one need not have millions of dollars and a giant projection-mapped sculpture at all. This detail is amazing, and is just another sign that, as a performer and a person, Steve Ellison just rules. Sure, the Coltrane mojo probably helps, but nonetheless… electronic solo performers, take note.

“comprising people of all demographics from their 20s to mid-30s” – that line is quite hilarious.

a good point. crap! all walks of life would be more accurate.

Written by Vee Hua 華婷婷
2 comments
Junip – Junip Album Review
SALTLAND – I Thought It Was Us But It Was All Of Us Album Review
wpDiscuz
2
0
Would love your thoughts, please comment.x
()
x
| Reply