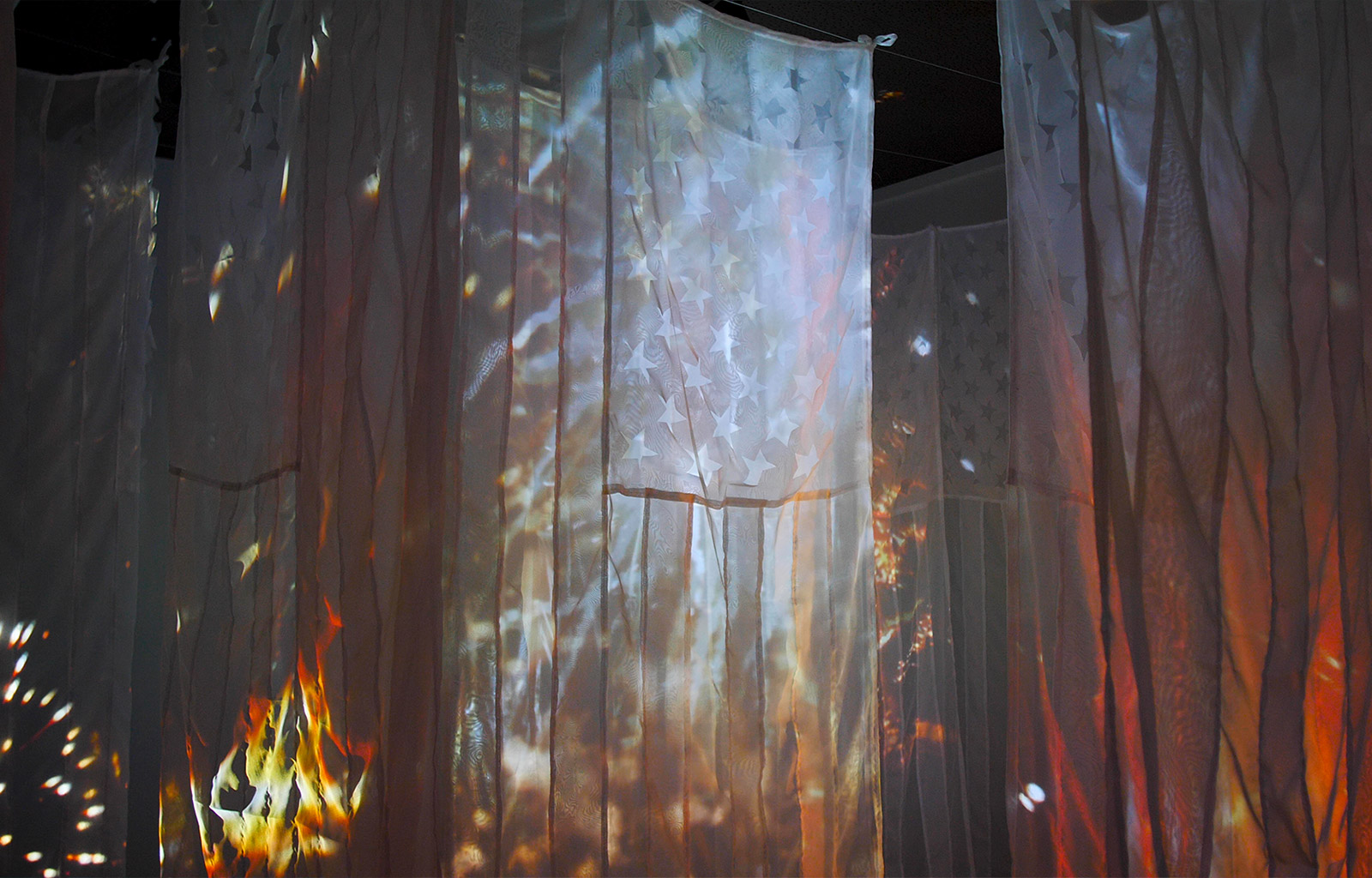 “Capitalism drove our expansion westward, leaving an enormous human and environmental cost in its wake. However, the myths surrounding our settling of the west will have you believe something totally different, entwining these events with American values of ‘freedom’ and ‘independence.’ Our history of settling the West is both a beautiful myth and a terrifying reality.” – Emily Tanner-McLean

“Capitalism drove our expansion westward, leaving an enormous human and environmental cost in its wake. However, the myths surrounding our settling of the west will have you believe something totally different, entwining these events with American values of ‘freedom’ and ‘independence.’ Our history of settling the West is both a beautiful myth and a terrifying reality.” – Emily Tanner-McLean
How does an individual examine the depth, authenticity, and complexity of reality through artistic expression? Seattle-based interdisciplinary artist Emily Tanner-McLean has toyed with this existential question for some time.
Through her immersive works, she invites viewers to contemplate new perspectives by creating physical spaces which upend what we know to be our world. McLean’s 2020 multimedia installation, For Those Who Have Seen the Elephant, is currently on display at Inscape Arts in Seattle’s International District neighborhood, where she has been one of this year’s resident artists.
A former Immigration and Naturalization Service (INS) facility which was turned into the city’s “largest arts and culture enclave” in 2010, Inscape Arts’ sinister past is memorialized throughout the building — but can perhaps be seen most explicitly in the building’s upper courtyard, where visitors might stumble upon graffiti remnants of international names, scrawled in black tar. Dynamic and profound despite their haunting roots in incarceration, the names exemplify the oppressive America which has been intermixed with its quest for freedom — and this running tension runs throughout much of Tanner-McLean’s work.

In the era of COVID-19, Emily Tanner-McLean’s Inscape Arts installation, For Those Who Have Seen the Elephant, is available for timed, socially-distanced public viewings throughout August 2020. Please schedule a visit on her website.

‘Seeing the Elephant’ in Everyday Life

“I’m really fascinated with the westward expansion that happened in this country. It was a pretty gruesome reality for a lot of folks. It illustrates the idea that so much of reality is what we imagine…” says Tanner-McLean, regarding the 19th-century movement west, which began with the Louisiana Purchase in 1803. “Capitalism drove our expansion westward, leaving an enormous human and environmental cost in its wake. However, the myths surrounding our settling of the west will have you believe something totally different, entwining these events with American values of ‘freedom’ and ‘independence.’ Our history of settling the West is both a beautiful myth and a terrifying reality.”

Peeling back these layers of reality is somewhat of an obsession for Tanner-McLean; it’s a theme throughout many of her interdisciplinary works. For Those Who Have Seen the Elephant, for instance, gets its name from “seeing the elephant,” an American idiom Tanner-McLean stumbled upon a year-and-a-half ago.

“[It] means to ‘see the world,’ but was used sardonically or sorrowfully by those involved in the Civil War, Mexican-American War, and the settling of the West…” she explains. “The ‘elephant’ in this context meant a bloody battle, the merciless wilderness, and the ‘others’ that inhabited that wilderness.”

For novice soldiers in wartime, expressing a desire to “see the elephant” might have translated to his wish of being baptized in hostile fire and subsequently being elevated to the status of a war veteran. In a modern context, Tanner-McLean interprets the phrase as the moments in which one’s perception of the world does not match reality, or when idealized expectations and values are not reflected in outcomes and actions. The resulting cost versus benefit disparity might then render any concept of the “American dream” to be a myth. 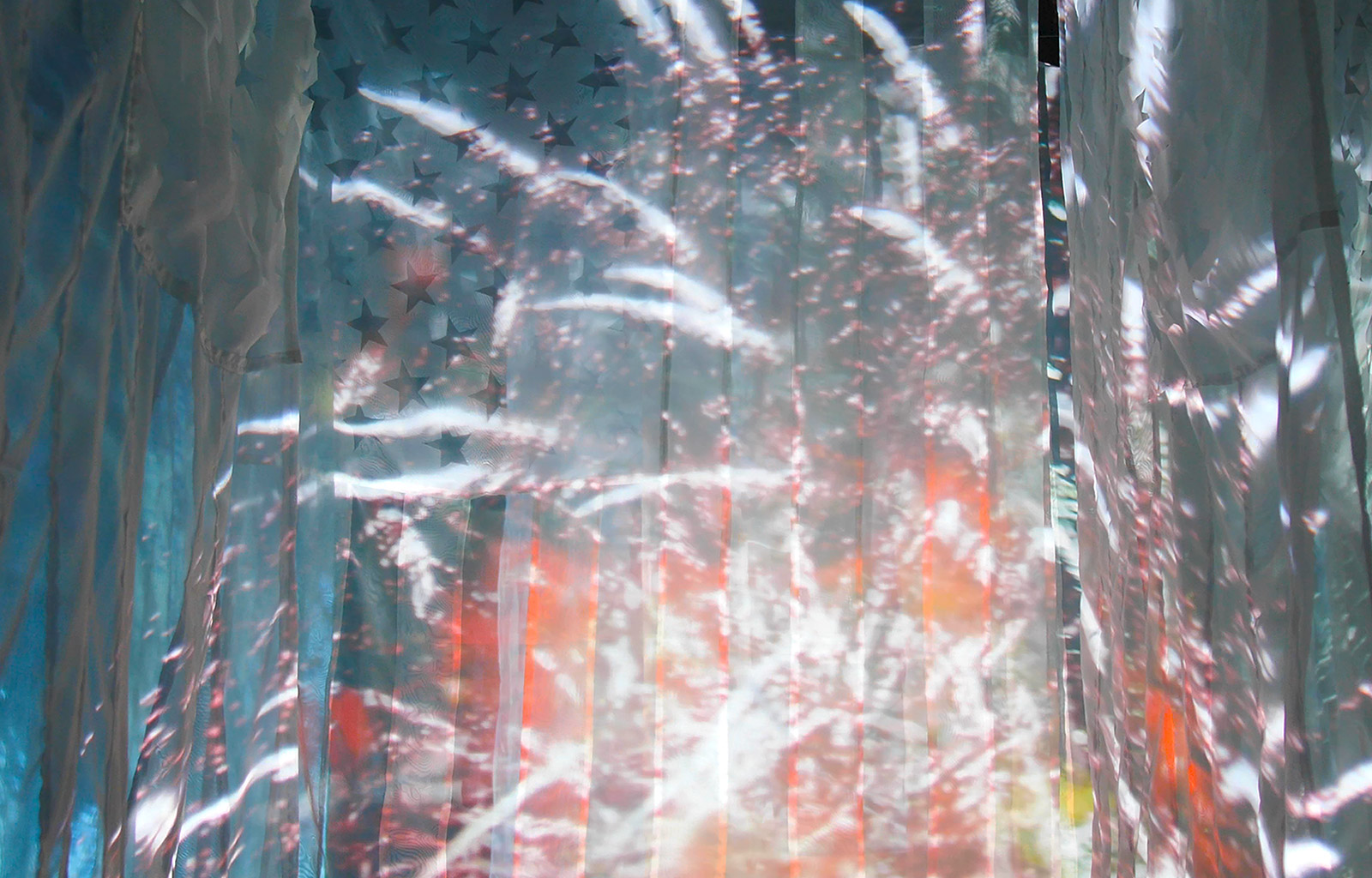 For Those Who Have Seen the Elephant, 2020, installation at Inscape Arts

Using a claustrophobic arrangement of hand-sewn, translucent American flags, Tanner-McLean’s installation of For Those Who Have Seen the Elephant is surrounded by a 360-degree arrangement of video projectors and speakers, which project images and sounds symbolic of America’s complex history.

“I’m fascinated with combining video and audio into a feeling of a presence of something that you cannot see…” Tanner-McLean says. “What kind of beauty can I create to seduce the viewer? What can I put together to provoke conflicting emotions?”

Fireworks are front and center in the installation, and as they splatter and explode in vibrant colors across a maze of blank white flags, they conjure a sense of irony. Over the course of a viewer’s experience, the familiar sonic bursts slowly transform into sounds far more sinister — those of fearful, panicked breaths and desperate footsteps on the run, at times lost amidst the excitement and chaos of the fireworks; at times, clearly audible.

“While fireworks may be a form of celebration,” explains Tanner-McLean, “they are also made from gunpowder — a complicated part of America’s history.”

Tanner-McLean first discovered the two-faced nature of America in her early 20s. Her political awakening took place after the horrifying events of 9/11 — a time when she was studying art at New York University (NYU), and in a position to closely observe how the nation reacted to trauma.

“In the moments after 9/11, the sight of stars and stripes hanging from what seemed like every apartment window on either side of a New York City street… made my heart swell with pride,” recalls Tanner-McLean. “This country’s values and spirit seemed indestructible in those moments.”

Yet when America reacted to the tragedy by starting a war in the Middle East and the flags slowly disappeared from New York window sills, her perception changed.

“It didn’t go from love to hate, but just got so more complicated…” she explains. “The myth of America and the reality diverged. This was an awakening of sorts: the realization that anything, including a nation, holds within it the capacity to be both virtuous and heinous.”

In Tanner-McLean’s 2017 piece, 1,000 Times/500 Miles, she uses a combination of video projections and recurring sonic samples of footsteps and breath to disorient viewers. Inspired by two songs — the contemporary “1,000 Times,” written by Hamilton Leithhauser and Rostam Batmanglij, and “500 Miles,” a traditional American folk song credited to Hedy West — the piece uses the contrasting and conflicting tunes to draw out “competing horizons that tremble from friction.”

Media’s ability to simultaneously engage the senses in a myriad of ways makes it a perfect tool for Tanner-McLean to present dualities and multiplicities, challenge perceptions, and tease out her subversive narratives.

“Our realities are inherently one-sided — either incomplete or, in some cases, totally contrived,” says Tanner-McLean. “To truly ‘see’ might in fact mean to understand our capacity for blindness on individual and societal levels. Recognizing this is an uncomfortable process, but it is the first step in affecting change in any capacity or context.”

Follow Me through Four Levels, Tanner-McLean’s 2018 video installation at goCstudio in Seattle, explores Eastern religious thought and “four levels of achieving consciousness.” Set in a room within a room, the piece features multicolored forest scenery and invites viewers to peer into a small window of an ever-changing reality, while a detached voice repeatedly asks the question, “What did you want and what did you get?”

Repetition — as well as recurring visual techniques and audio motifs — are often used by Tanner-McLean to communicate disconnect and desolation. Breath, for instance, is a great catalyst for discomfort; it can mimic the feeling of an unknown presence, thus connecting viewers back to central questions around subjective and objective reality.

“[Breath] signals the human condition, represents life, and one emotional state,” she describes. “Breath is sort of this greater link.”

For Tanner-McLean, the sound of breath can connect human beings to the natural world. As someone who grew up in Long Island but later moved to the Pacific Northwest, a level of respect and awe of nature are always present throughout her work.

“Nature in itself is a dual beast of beauty and terror…” she says. “I am reminded that Rainier is still a volcano; people still go backpacking and never return. Nature, to me, is the beginning and the end.”

In Tanner-McLean’s 2017 experimental video piece, End/Begin, footage of a rocky cliff face is reflected in a body of water. Over the course of its 2:15 duration, the reflection and the real cliff become hard to distinguish from another, serving “as a metaphor for real and fake, the conscious and subconscious.” The sound of water running plays as background noise to a spoken word piece, which repeats varying portions and fragments of the phrases, “This is where it ends,” and “This is where it begins.”

“A lot that can be learned from [nature],” Tanner-McLean explains. “The learning comes from acknowledging and respecting the fact that nature — and all things — has the capacity to give or take, create or destroy, be godly or demonic. When you recognize this, you gain a better understanding of how to exist in harmony with and appeal to the better side of that thing.”

Tanner-McLean — who began her art career as a painter — became interested in multimedia and interactive work after a ten-year hiatus from the art scene. She especially credits renowned Japanese artist Yayoi Kasuma for teaching her “the value of how time and space work in art.”

“I first experienced Kusama’s The Aftermath of Obliteration of Eternity at the Gagosian Gallery in 2009,” she recalls. “I was the only one in the gallery, and the security guard let me stay in the chamber for as long as I liked. I had a religious experience.”

“Art that interacts with me at multiple levels are works that I gravitate towards…” Tanner-McLean continues. “The most powerful art that I have experienced is the nonliteral and subtle. You can’t really describe it.”

In honoring the artist which has most profoundly challenged her to pursue her own creative practice once again, Tanner-McLean describes a humbling, ethereal, and ineffable quality which, by no sheer coincidence, shines Tanner-McLean’s own boundary-pushing, politically-charged work just the same.

In the era of COVID-19, Emily Tanner-McLean’s Inscape Arts installation, For Those Who Have Seen the Elephant, is available for timed, socially-distanced public viewings throughout August 2020. Please schedule a visit on her website.
Tagged asdarkdualisticemily tanner-mcleanexperimentalgagosian gallery (new york)gocstudio (seattle)inscape arts (seattle)installationluminousmixed mediamultimedianaturenew york artistspoliticsseattle artistssociologyspiritualityvideo