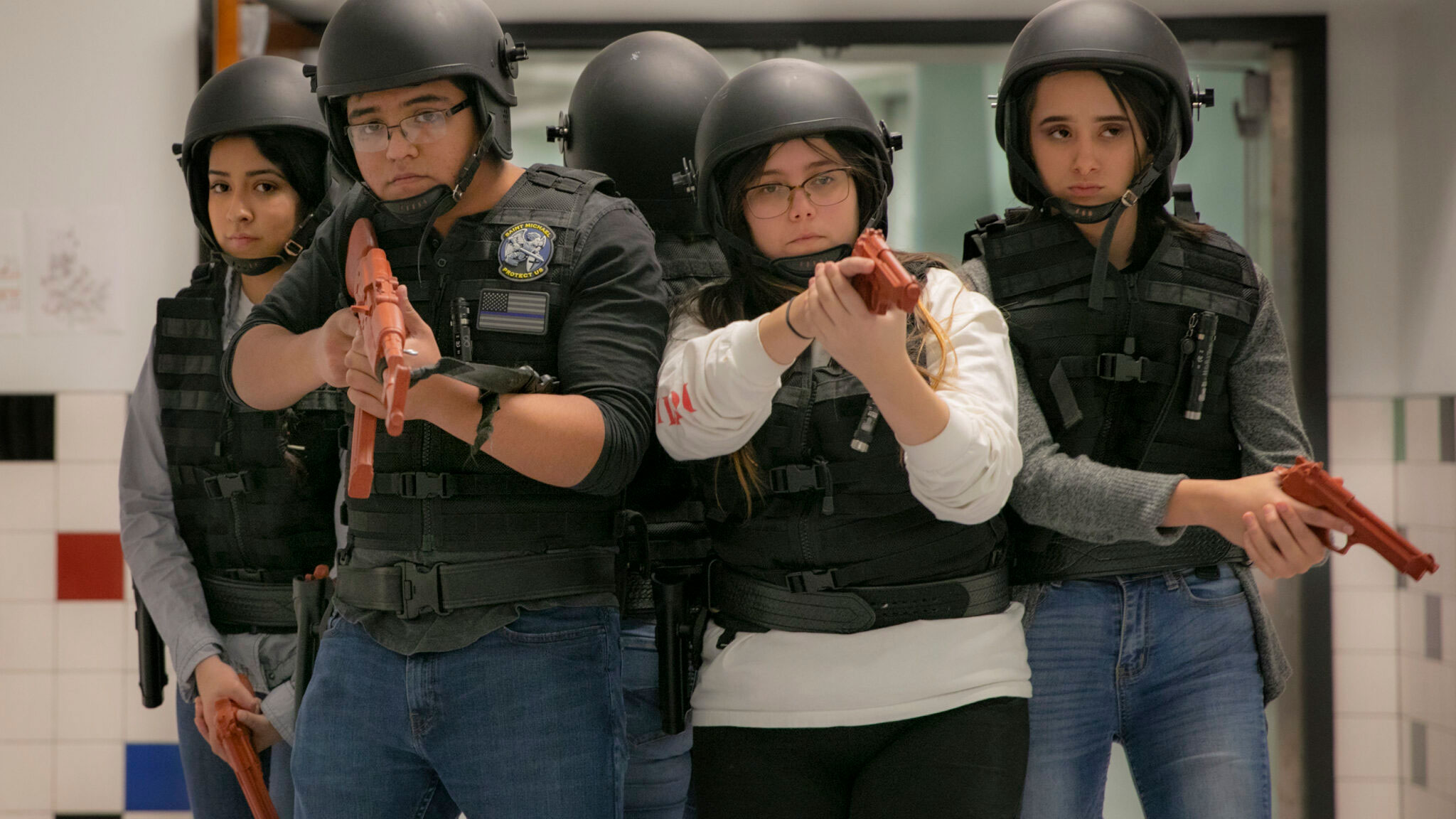 Alison Smith7 min readFebruary 10, 2021Add comment
In the Criminal Justice Club at Horizon High School in El Paso, Texas, students bond and gain camaraderie while also rigorously training for careers in law enforcement. Horizon’s program is the subject of At the Ready, filmmaker Maisie Crow’s enthralling yet challenging documentary that premiered at Sundance Film Festival in 2021. An admirably non-judgmental film about a polarizing topic, At the Ready plunges us into a world of fake guns and riot gear, tense simulations and jittery competitions, DIY forensics and weighty class discussions.

The film documents a face of law enforcement hopefuls — young, idealistic, and identifying as Hispanic — that may be unfamiliar to many viewers. Each of the three teenagers it profiles has a compelling story: there’s the upbeat Christina, a Horizon graduate embarking on the border patrol Explorer Program; the soft-spoken Cesar, who helps his single mom care for his younger brother; and Mason (who has since come out as trans, and previously went by Kassy), the club’s leader who sees it as an unconventional family. While charting their respective journeys, At the Ready allows for contradiction and cognitive dissonance, for fractured dreams and murky decisions. Its three subjects each grapple with how to define and prioritize their duties to their family, community, self, and conscience. Each inches closer to discovering the core of their principles without denying the messiness of their situations.

“[I] Put my beliefs aside, whatever they are — this is a story about three teenagers and their worldviews at that moment in time.” – Director Maisie Crow

At the Ready untangles the confluence of forces that push kids into careers in law enforcement, but doesn’t deny their interest and agency. As the film’s subjects frequently point out, these jobs pay well, include good benefits, often don’t require a college degree, and are proliferating in an age of draconian crackdowns on the Southern border. They are an especially good prospect for kids in El Paso, where most jobs pay less than the national average. While the kids in Horizon’s programs are clearly passionate, they are also influenced by an environment awash in applications, pitches, and advertising. During a job fair, a recruiter tells the majority-Hispanic students, “You’re an asset,” explaining how their knowledge of border communities’ culture and language could prove useful to law enforcement.

Christina’s story, in particular, highlights the contrast between the lure of economic incentives and the moral complexity of group identity. In candid scenes around the dinner table, her dad, Rafael, a Mexican immigrant who has been a truck driver for decades, praises Christina’s go-getter pursuit of her career. Poignantly, Rafael tells us that he only started to earn $50,000, the entry-level salary for law enforcement officers, two years ago. Rafael resents the blithe condescension of those who paint Hispanic ICE agents as racist sellouts, and points out, “There are good people and bad people, like in all jobs.” At the Ready shows that it is possible to internalize the truth of Rafael’s statement without being an apologist for law enforcement’s worst excesses.

Christina’s family, like many in El Paso and elsewhere, are not law-and-order enthusiasts so much as economic pragmatists. Furthermore, in later scenes, cracks start to appear in Christina’s seemingly foolproof plan. She tears up at videos of family separation at the border, and attends Beto O’Rourke rallies where there are more pride flags than ICE flags. In one subtle but striking scene, Christina’s aunt watches a video of her uniformed niece sternly saluting with her unit, and gives us a baffled side-eye, as though to say, What on earth is she thinking? In scenes like these, At the Ready illuminates how even the fiercest desire to please one’s family is far from straightforward, and how filial pride is an ever-shifting goal post.

Indeed, one of the most rewarding parts of At the Ready is watching its thoughtful subjects navigate clashes between their families, ambitions, and politics. In particular, the discussions hosted by the empathetic Ms. Weaver, one of the advisers to the Criminal Justice Club, offer a snapshot into students wrestling with thorny questions and figuring out their worldviews in real time. During one session, the students debate the controversial question of whether the Texas National Guard should have been summoned in response to a caravan of asylum seekers who tried to enter the U.S. in 2018. One student named Joshua, a firm “yes” to the resolution, says he doesn’t want his taxes to go towards subsidizing undocumented immigrants; his classmate comes back with the biting comeback, “I don’t understand; Joshua lives in [Ciudad] Juárez!” This moment, in addition to capturing the bravado of high school students, refutes the insidious idea that Mexican-Americans are a homogenous voting bloc with fully consistent positions.

During this discussion, Cesar makes the point that Mexico and Texas are linked through a network of family ties, and unnecessary militarism and death on one side of the border will inevitably bleed to the other. People will not be deterred by a wall, and the urge for a better life is too strong to be suppressed with force. Indeed, Cesar’s story underlines the border’s fluidity, yet is also a testament to how fraught family ties spanning it can be.

In a heart-wrenching confession, Cesar wonders why his dad chose to traffic drugs to the U.S. despite having a well-paying job and a family to protect. Perhaps even more of a gut punch is the fact that after serving time in prison, he had the option to stay in El Paso, but chose to return to Juárez, to the rugged freedom of dunes and monster trucks. Cesar regularly makes the trek between El Paso and Juárez, eventually quitting the Criminal Justice Club and putting on hold his dreams of becoming a border control agent to focus on repairing his relationship with his father, much to the dismay of Ms. Weaver. Would you arrest your father? is a question that crystallizes so many of the movie’s conflicts.

Adolescence is often a period of burgeoning social consciousness, and the politics of At the Ready‘s subjects sometimes put them at odds with the culture of their chosen career. The Criminal Justice Club’s classroom has a Blue Lives Matter flag hanging on the wall, and one of the club’s advisors, Mr. Guerra, is a staunch Republican and disciplinarian. Smartly, At the Ready doesn’t start digging into overheated national politics until the second half, once we’re already attached to its subjects and deep within their subculture. Mason’s fascinating story, in particular, is situated at the crossroads of the culture war. Mason’s political convictions and devotion to the club, which they view as a surrogate family, are on a collision course, and the film tracks their incremental but unmistakable loss of faith in law enforcement. At a Beto O’Rourke rally, they eagerly grab LGBTQ pins with slogans like “Make America Gay Again,” but after the rally, reluctantly give them to their friend, deferring to the social conservatism of some of the Criminal Justice Club’s advisers. Another seed of doubt is planted during one of Ms. Weaver’s class discussions, where some of the students talk about immigrants as though, in Mason’s view, they are pests. For Mason, the club was an outlet for friendship and team spirit, not aggression; it was always more about the celebratory huddles than the fake guns.

Through the stories of Christina, Cesar, and Mason, At the Ready offers a fresh, nuanced perspective on the fraught issue of policing the border. With minimal editorializing and framing, the cinema verité-style film examines charged political debates as they manifest in classrooms and around the dinner table. It focuses on not just three kids pursuing their dreams, but also the environment in which they do so — a context of pervasive pro-law enforcement advertising and family pressures to achieve the American Dream. Without ignoring or whitewashing the abuses of law enforcement for the sake of forced neutrality, the documentary carves out a space for teenage thoughtfulness despite fractious and seemingly insurmountable political divides.