Vivian Hua 華婷婷8 min read2 months agoAdd comment
Share
FacebookTwitter
On City of Mirrors, the fourth full-length record from Chicago’s Dos Santos, the five-piece band once again showcases their musical expertise by presenting a rich, multicultural melting pot of sounds. Coming from wide-ranging diasporic backgrounds, the members of Dos Santos are active participants and students of Latin American musical traditions, and it is in these traditions that they anchor themselves creatively, then expand upon them with ease, grace, and singular originality.
“Whether that be rhythm and thinking about the richness of the rhythmic anchors of a lot of Latin American music, or the tradition of Latin American song — [which can include] the poetics of traditional Mexican music or the melodrama of Latin American romantic song — all of that has always informed what we do,” explains lead singer and multi-instrumentalist Alex Chavez. 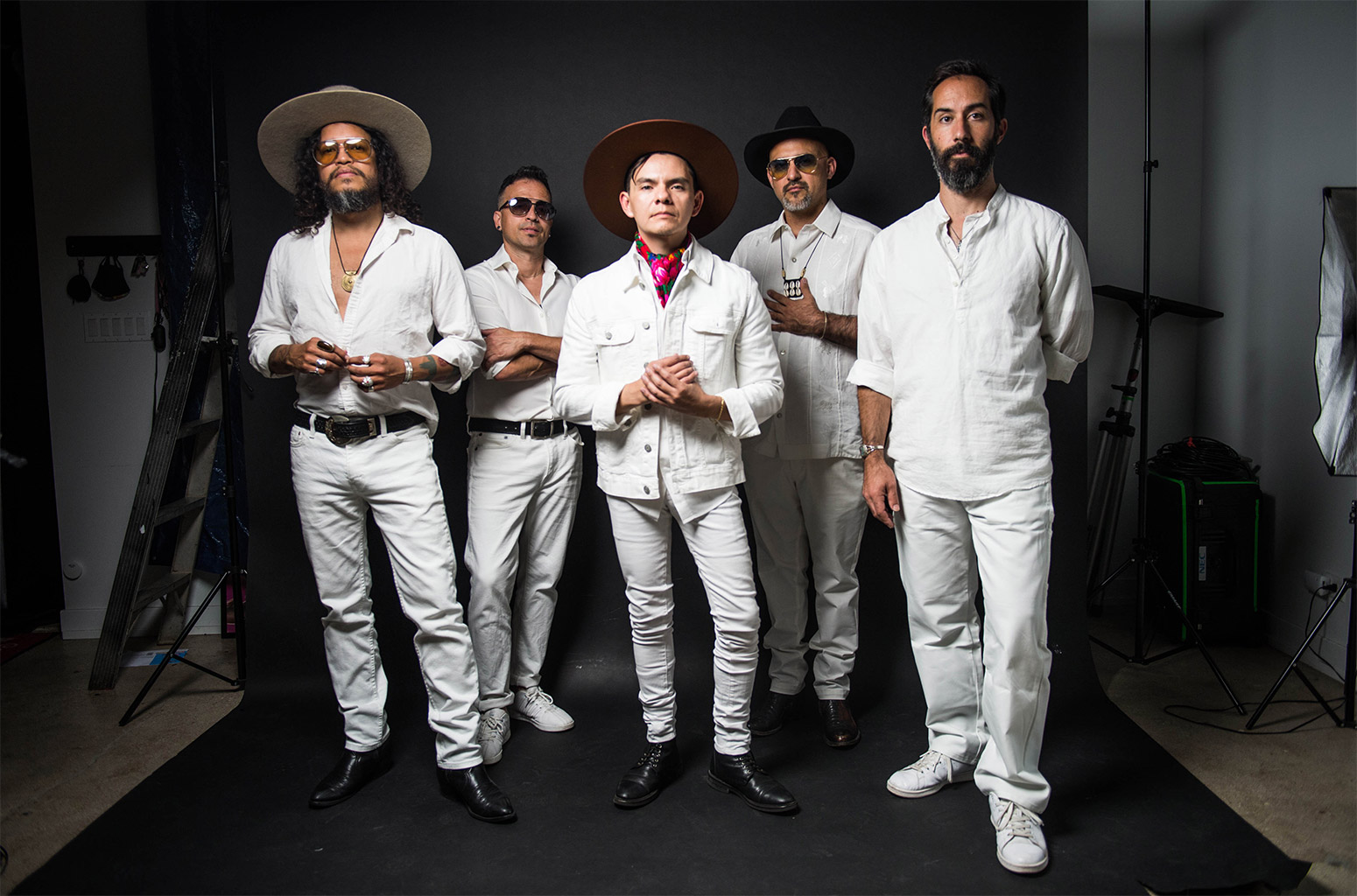 Yet Dos Santos is adamant to never make the same record twice. For City of Mirrors, they enlisted the help of Chicago-based musician Elliot Bergman — best known for his involvement in projects such as the experimental Afrobeat project, Nomo, and an indie duo with his sister Natalie Bergman, called Wild Belle — and recorded in Bergman’s Los Angeles studio. The added perspective, they thought, would encourage them to step outside of their own songwriting process and introduce an element of experimentation.

Bergman’s presence allowed for Dos Santos to essentially add a sixth band member, who could help them distill and rethink material that they had previously written or bring new ideas for them to build on together. As a producer, Bergman also helped the band discover the recording studio as a different kind of creative space, rather than a space to simply document.

“For instance, we improvise quite a bit in our live setting, but we’ve never taken that energy within the context of the studio,” Chavez explains. “There were moments when we would just come together, and [Bergman] was facilitating these contexts of improvisation that we used to create in the moment. To have his perspective was really key in helping us do something different or grow in a different way, etc., and that was what we wanted.”

Improvisation made its way onto numerous tracks of the album, including the album’s title track, “City of Mirrors,” which was built upon a warm-up session between percussionist Peter “Maestro” Vale, drummer Daniel Villarreal, and bassist Jaime Garza. Under Bergman’s guidance, it grew bit by bit, with Bergman, Chavez and guitarist Nathan Karagianis progressively layering on elements until a musical form emerged. The final version also guest-features Martín Perna on baritone saxophone, which rounds out the robust, melodically-memorable track.

“There’s an aspect of [“City of Mirrors”] that is very melancholic or sounds a bit like a lament,” explains Chavez, who was then challenged to find a suitable lyrical counterpart.

Thus, “City of Mirrors” came to be named after Macondo, a fictional city found in Colombian writer Gabriel García Márquez’s landmark novel, 100 Years of Solitude. As Chavez describes, Macondo is a central character throughout the book — “this sort of magical city which is at once this place of both beauty and dread; mourning and hope,” referred often by Márquez as the City of Mirages or City of Mirrors.

Dos Santos hails from Chicago, where nearly 30% of the population identified as Hispanics-Latinos in the 2020 census. They are the city’s second largest racial or ethnic group, with its largest populations coming from Mexico and Puerto Rico. Conversations between Chavez and Vale, who is Puerto Rican, helped inspired the track’s subject matter.

“I found myself getting these images of what I soon realized were these flashes of the island of Puerto Rico…” Chavez recalls. “[With] everything that [was] going on with the post-Hurricane Maria moment, the political moment and uprising that summer prior, and all of the earthquakes… I think this song is about the island, and it really was kind of a love song to the island, but it’s this very melancholic message about loss; about mourning.”

“I just kept thinking, that in some ways, Puerto Rico is this sort of place like that: Ground Zero for colonial encounters; this place of trauma and dread and violence, and a lot of beauty, as well,” he adds.

Nobody knows you here.
So many have departed and the hearsay travels…
You hide the sadness.
Your work, your beloved all weigh heavy.

Waters rising in all cardinal directions.
The winds whip about.
And your hands touch everything you value.
And the hours pass.
You don’t recognize the reflections in the mirrors.

Nobody knows you here.
So many have departed and the hearsay travels…
You hide the sadness.
Your work, your beloved all weigh heavy.

Reflecting Back the Tensions

Throughout its 13-track duration, City of Mirrors presents many musical and percussive ideas. Depending on a listener’s intentions, state of mind, or understanding of the subject matter, the same track may feel as though it is transmuting dark themes into a more positive output, just as it may wallow in a state of heavy, introspective reality. Album opener “A Shot in the Dark” and “Glorieta (Roundabout)” hold a sense of tender wonder, while numerous tracks, including “Alma Cósmica (Cosmic Soul)” and “A Tu Lado (By Your Side)” jump across or contemplate the fundamental nature of time. Perhaps most present are themes of loneliness and isolation, as found on”Palo Santo,” “Ghost. Me.,” and “Cages of Palaces,” which could be applicable at both individual and societal levels. All the same, the colorful dynamics of the music, rich with keyboards, guitars, and various kinds of wind and percussive instruments, doesn’t quite allow the lyrical heaviness to remain stagnant for exceptionally long.

First conceived in 2019 but released in late 2021, the album’s hard-to-pinpoint emotional state feels appropriate for pandemic times. Chavez believes the setting may have resulted in some positive surprises.

“This last year-and-a-half, the pandemic and all the rest have really forced a lot of us to reflect, because we had to,” says Chavez. “[We are] reflecting on ourselves and reflecting on the society that we live in; reflecting on our connections to other people… and so, I think the idea of mirror and reflection has the potential to resonate in ways that we didn’t really anticipate clearly, fully, when we were first making this record.”

Such resonance may also be indicative of changing attitudes towards multicultural music. Chavez intuits that the new media age has “cultivated within people a greater openness to different kinds of music from everywhere.” Perhaps it is a sign that listeners are finally understanding that American music inspired by Latin American musical traditions is not only a fad of the moment, but here to stay.

“Having kind of been active in the music industry now for about 20 years, I do recall in previous projects that I had in the early 2000s, where I would get really strange questions from journalists around language or crossover or things like that, which didn’t compute with me,” Chavez shares. “Being Latino from the United States, we’re all bicultural, or we have to grapple with both English and Spanish, or we have to grapple with thinking about issues of being mixed status, particularly within families and with citizenship. We’re all dial-surfers… That’s just our experience of the world in this country.”

“To be able to make music… that draws upon a well of broad influences… we’re not doing anything unique,” he concludes. “That’s just… of course. Of course that’s what we would do.”

This album grapples with and transgresses these tensive binaries because we have and continue to cross borders. Yet, for us, the border is no metaphor — too much real staring back at you, not enough symbolism.

We embody the border.
We (our families) have crossed it.
We (our stories) are sticky with its residues.
And so… we cross the border of self through our art — out of necessity.

This album was imagined while touring the country as families were corralled in cages.
We then fled the wildfire of a nascent pandemic poised to
ravage our communities as we recorded in Los Angeles.
Finally, our sonic journey concluded in Chicago while the country rebelled against the murderous consequences of policing and white supremacy.

Through this cascade of tipping points and tragedy, we summoned melody and verse to sound out verdant technicolor dreams of freedom, mirroring the miraculous vortex of our time.

Borders were at the center of these struggles.
Borders — of nation, of belonging — are the struggle.

And so, this album is a set of dispatches from that wondrous journey…
…our journey across and into a sunburst surreal.
…our astral meditations on loss and triumph.
…our sonic crossings across a landscape of trauma and effervescence.

For the border divides and defines places, yes. But it is equally a place unto itself — a borderland.
This is the forbidden place where we dwell.
The enchanting space where we are at home.
The bustling city where we reflect.
Look into our mirror.
See us in you.

NOTE: The above write-up was collectively written, arranged by Chavez from thoughts and reflections from the members of Dos Santos. Chavez explains that while the narrative’s original purpose was to share the artistic vision behind City of Mirrors and was never intended for public consumption, the label felt that it was a perfect accompaniment for the album’s release.

“A lot of people have been moved by it, which maybe says a lot about how it was written,” explains Chavez. “It wasn’t written for journalism.”

Written by Vivian Hua 華婷婷
Add comment
Lynn Shelton’s “Of A Certain Age” 2021 Grant Finalists: 12 Filmmakers to Watch
Nite Jewel Interview: When There is No Sun, One Can Still Find the Light
wpDiscuz
0
0
Would love your thoughts, please comment.x
()
x
| Reply