Stitching together “sparkles of ideas,” musician Nandi Rose aka Half Waif and director Kenna Hynes turned one-off creative visions into a four-part video series full of ambitious sequences. Proving their “magical and effortless” collaborative relationship, their team has created a narrative rich with “botanical warriors,” motorcycle rides through lush scenery, and subtle visual effects that seem to put the quest for a golden flower into hallowed space.
Catch a sneak peek behind-the-scenes as Rose and Hynes discuss this suite of short films connected to Half Waif’s 2021 record, Mythopoetics, out in July 2021 on ANTI-. For those who like what they see, rest assured: these are teasers for a full-length feature film they plan on making someday.

This music video is part of a series of works. How did you all decide to embark on such a large-scale project together, and how might you describe your collaborations?

We have a history under our belt of working on projects together, so at this point, the way we work is very intuitive and collaborative. While recording “Swimmer,” Nandi had a vision of motorcycles, a quest for a golden flower, and an old woman bursting into light. Under the influence of wine and cheese, we started to dream about how we would expand that world to coincide with the album rollout. Knowing that Nandi would be releasing four singles leading up to her album announcement, we thought, “Let’s take advantage of this slow reveal and have some fun with it.” A big “aha” moment for us was when we connected the golden flower in “Swimmer” to the golden seed planted in “Orange Blossoms.” That’s when the narrative connection really started to develop, and it blossomed from there. But it was a really organic evolution overall. We did not go into this saying: we have an idea for a four-part video series that starts here and ends here. There was no project proposal. We just had a bunch of sparkles of ideas that we excitedly stitched together.

Collaborating is magical and effortless. We’re always pushing each other to grow and try new things, bouncing ideas back and forth and filling in the blanks like a Mad Lib. And that’s where the magic comes in — that ability to fill in the gaps and together create a whole picture. There’s also no self-consciousness when we work together. We’re able to express ideas that are only half-formed and not feel like we have to hold anything back for fear of judgement. It’s kind of a rare thing, to feel so uninhibited in the creative space with another person.

Moving from “Orange Blossoms” through to “Party’s Over” and “Take Away the Ache,” we move from a monochrome state of fragility slowly into color, to an individual eventually adventuring out solo into the wilds. How does this gradual unfolding tie in with the larger themes of this record?

Visually, the idea of moving from a shadowy interior to a bright exterior is present in the album art. We really tried to connect the locations between the videos and where the album art was shot, so there is this through-line of architecture and environment and underlying themes. The album cover image is outdoors in bright vivid colors, while the inside gatefold of the vinyl shows a dark room with a circular window — the same room from “Orange Blossoms” and the end of “Swimmer” — showing a portal to the blue marbled sky outside.

Thematically, this plays at the idea of moving from emotional interiority, where you can feel paralyzed and constricted and lost — to emotional exteriority, where you’re able to express the full range of yourself, finding freedom and power in that expression. The character we see in these four videos begins as a princess in a tower, stuck in some sort of reverie. By the end, she’s animated, active, alive and fighting. She needed saving but she saved herself by planting the seed that would become the flower that would eventually set her free.

That’s definitely a theme on the record, pulling from lyrics like, “No one’s gonna do it for me,” and, “Nobody’s gonna save me.” It’s a sense of salvation that comes from within — though not without the help of exterior support, a catalyst that gets you to look up and look out and see that the world is a beautiful and colorful place.

The nest-like attic space in “Orange Blossoms” returns in “Swimmer” — once empty, with a ray of what feels like hope, and later blooming, with the presence of a loved one who bursts into floral radiance. Can you shed some light on the evolution of that space and the symbolism which is present?

The space is at Nandi’s cousin’s farm, where her aunt lives. Given that “Swimmer” is written about her aunt, this added another level of poignancy and brought the magical sphere into the literal one.

In “Orange Blossoms,” we wanted the room to feel almost like a manufactured forest devoid of life. The princess is tangled in the branches, bound. Then she goes on this journey down a rainbow road, and when she emerges, suddenly there’s order and grace in the formation of trees, with the repaired cup in the middle, illuminated by the spotlight of the window. So there’s this sense of chaos and order happening not only internally but externally.

In “Swimmer,” we wanted to make the space feel the same, like it was untouched by time — a mythological space somewhere in your mind. There she is, lost again, older now — but she laid the foundation for her own salvation years ago, when she planted the golden seed, which is now the flower that her younger self delivers to her and transforms her into a piece of nature. Transformation is a huge theme the record. We aren’t talking about destroying energy or removing our painful past from our brains, Eternal Sunshine-style. We’re talking about finding ways to draw power from our past and transform it into whatever you need.

Wardrobe, styling, and costume design are significant in “Swimmer” in creating a vibe for the characters. What was the overall tone you were hoping to achieve, and how did you approach the design of each character?

Celina Carney did an incredible job with the costumes and styling. This is a really good example of trusting your team – everything needs to be very intentional but also led by instincts and creative impulses. The overall tone is one of sci-fi futurism; again, trying to evoke some sort of mythological out-of-time out-of-place quality. Masks were a necessary accessory while shooting during the pandemic, but it also fit the vibe. The idea behind the dancers’ costumes is that they’re almost like warrior lab technicians, who have built this bunker around the magic flower in order to harness its energy. So we wanted them to be in uniform.

For Nandi’s costume, she really wanted a harness, which Celina made in the black rainbow vinyl to mimic the jacket and also call back to the rainbows in “Orange Blossoms.” Nandi and Celina also had the idea of bearing a breast, which is partially inspired by that scene in The Favorite where Emma Stone’s breast is out and it just feels menacing. The exposed breast is also a nod to the back cover of the record, where Nandi perches on a rock naked, in a pose of fierce control and yet surrender. We’re playing with the idea of things being revealed not in a vulnerable sense but as a source of strength. 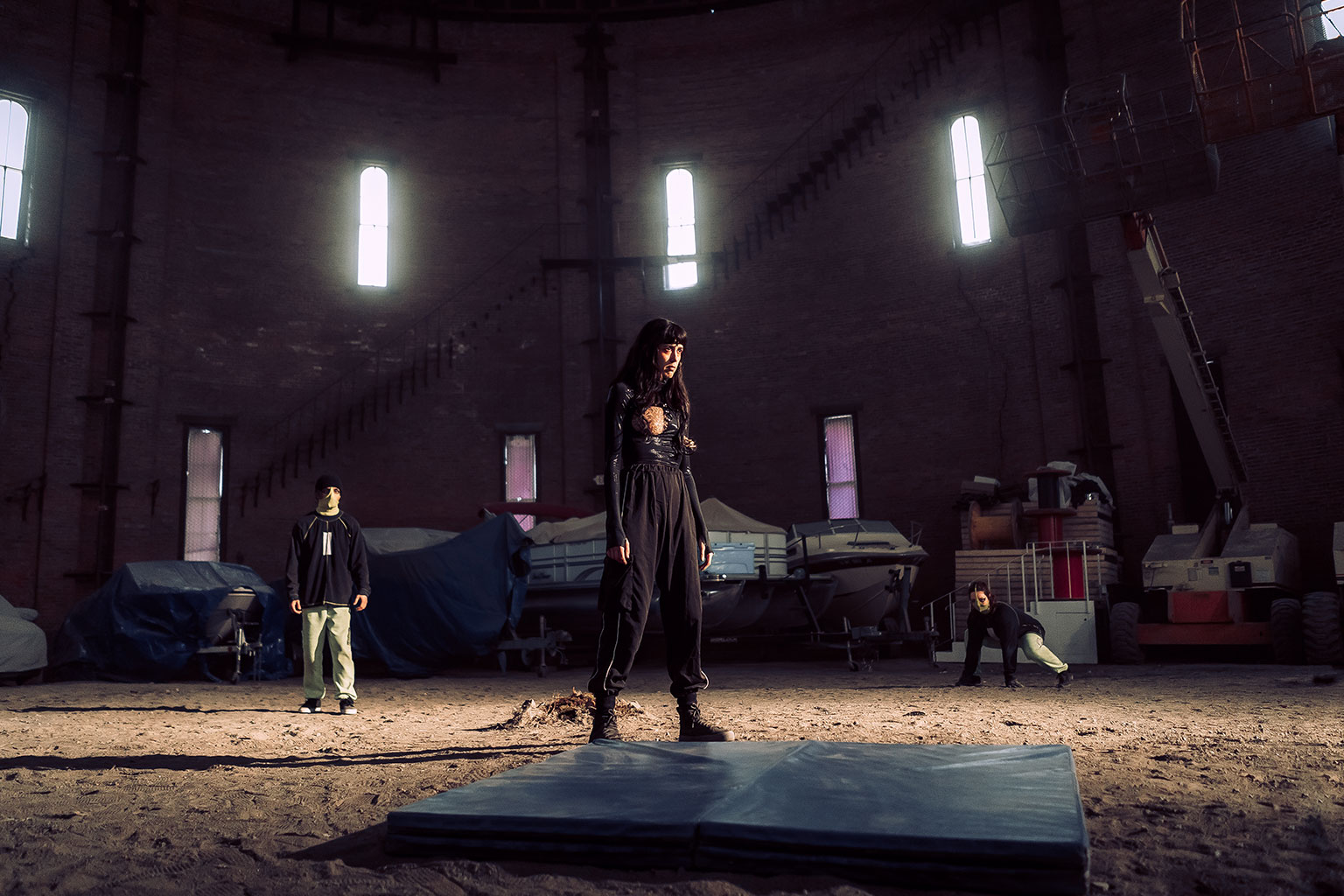 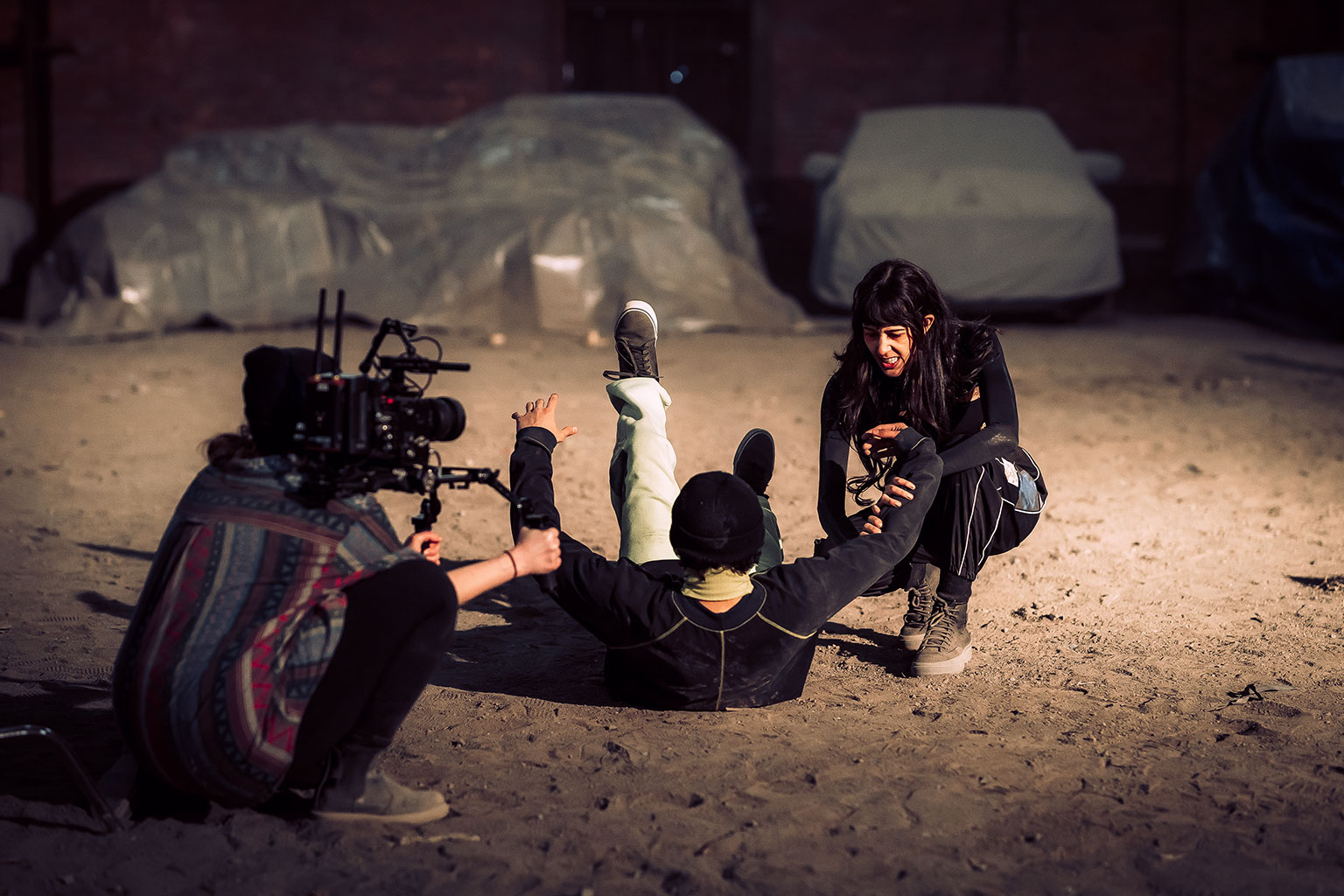 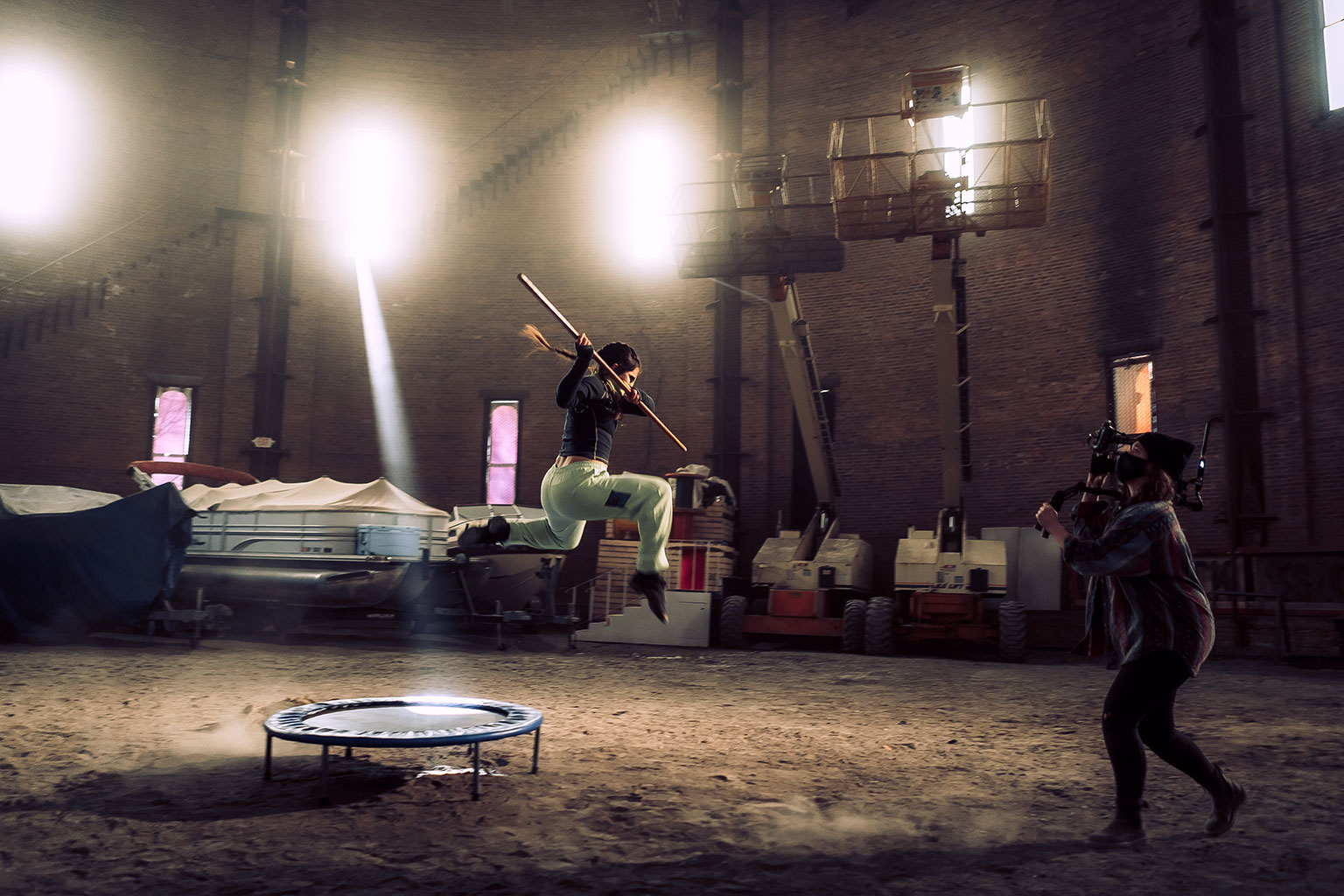 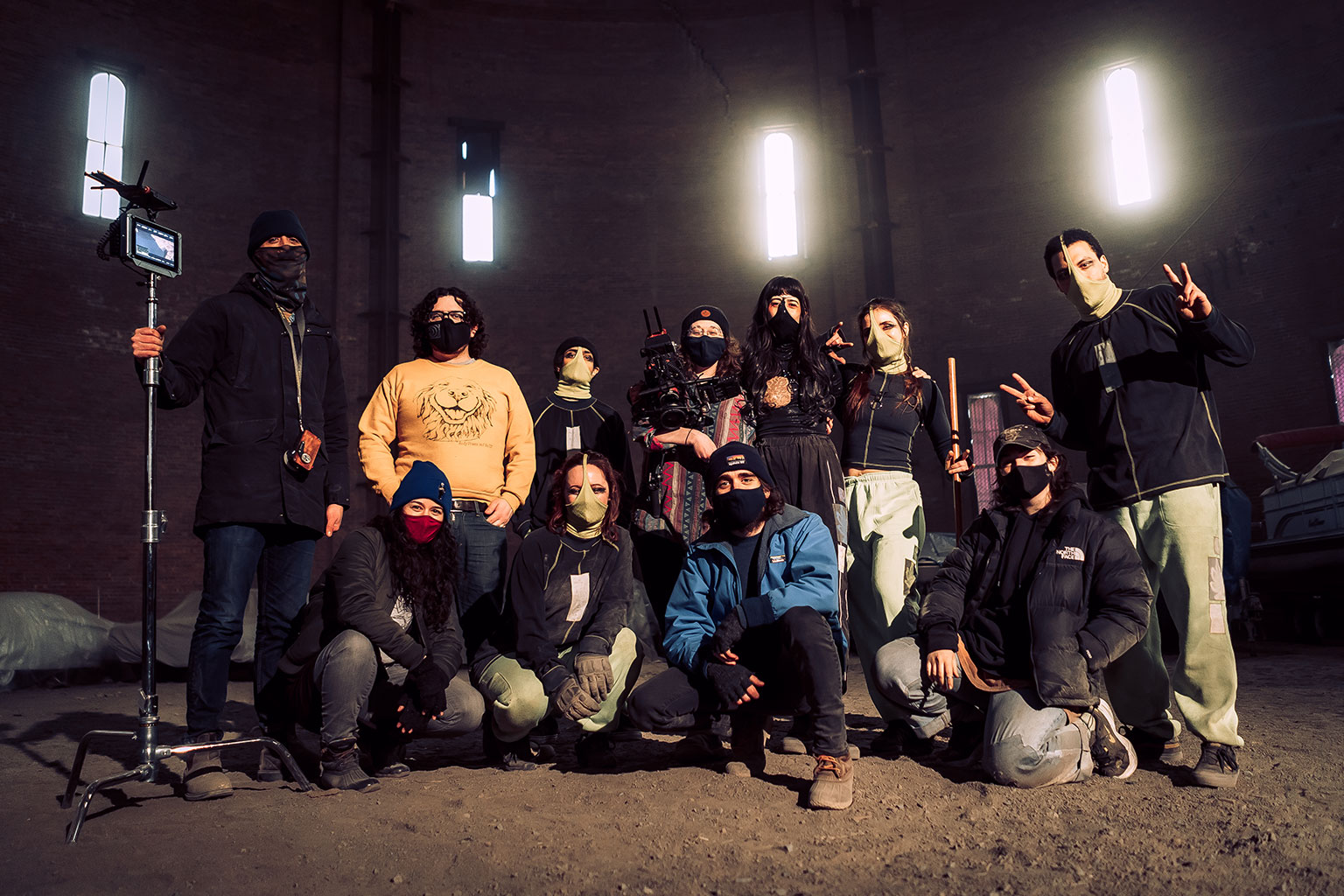 Movement is also a huge component in “Swimmer.” What were some standout lessons from choreographing and filming such ambitious movements? How do they serve the arc of the entire series?

We’re both really attracted to movement and using it in different ways. This was one of the very first ideas that came to our brains: this character going on a sort of quest and being met with adversaries who are trying to stop her from achieving it. That began with a motorcycle chase and then the dance-fight scene took it to the next level – you’ll notice that the motorcyclists are wearing a similar green color, so we imagine these are adversaries from the same team. The whole song and series is about overcoming obstacles, whether internally or externally, and this was just an obvious personification of those obstacles.

We also liked the idea that Nandi’s character started out as this princess in a tower, wearing a filmy dress in “Orange Blossoms,” and that she went through a real transformation physically to understand her power. Being able to realize that power in the dance-fight scene in the bunker was hugely rewarding and necessary to her complete transformation. Shoutout to choreographer Nadine Medina and stunt coordinator Nick Spadaro, along with the incredible team of dancers.

The themes of the full-length record, Mythopoetics, feel like they are about healing and transmutation, not just for an individual, but perhaps, for a lineage. How has making this record — then the visuals, for an even fuller approach — enriched that whole journey?

Yes, those are definitely big themes on this record. For Nandi, the goal of making an album is often to expel ideas she wants to get rid of or reject: in this case, patterns that she noticed playing out again and again in her family and that she wanted to break and eliminate from her own life. Making both the record and the visuals was a way of gaining power over those feelings. And that’s a big reason why the character we created is a warrior, but a “botanical warrior” — a soft warrior, a feeling warrior.

Seeing the video for “Swimmer” in particular come to life after living as an idea for a year was especially rewarding. That felt like the completion of something. When Nandi talks about this record, she talks about it being the end of chapter in her life. A decade-long chapter. She feels like she finally made the record she wanted to make, and the visuals have a corresponding quality of fulfillment of a mission.

Is there anything else you’d like to add about your creative process? Interesting anecdotes or moments?

Another thing we want to say is, despite all four videos connecting, we tried to do something different with each one. They’re formally, structurally different and taking references and inspirations from various places. “Party’s Over” is a one-shot, “Take Away the Ache” is a lyric video and an extended drone shot, “Swimmer” is an epic that nods to comic books and martial arts videos and has a long musical break in the middle (something we’ve never done before), and “Orange Blossoms” is kind of the most traditional music video format. It was fun to treat each one as its own mini-world, and then weave the narrative and visual clues throughout to bind them together.

Half Waif’s Mythopoetics is out in July on ANTI-.

Half Waif – “Party’s Over” Music Video

Half Waif – “Take Away the Ache” Music Video