Alison Smith8 min read6 days agoAdd comment
Swedish director Magnus Gertten‘s stunning documentary Nelly & Nadine (2022) is bookended by a triumphant black-and-white film reel of hundreds of women with fists in the air, kissing each other’s cheeks. In 1945, they arrived in the Swedish port of Malmö as refugees newly liberated from the Ravensbrück concentration camp. Yet amidst the jubilation, one face stands out: that of Nadine Hwang, the daughter of a Chinese diplomat and a member of the French resistance. One of the few women identified by historians, she stares plaintively at the camera, as though lost.

In his two previous films, Hoppets Hamm (Harbour of Hope) (2011) and Every Face is a Name (2015), Gertten focused on similar subjects and tracked down the unidentified women with the help of social media and 4K scanning technology. Seventy years after the footage was shot, he interviewed survivors from all around the world about this moment of liberation. As his films were broadcast on more and more TV channels, the momentum grew. In 2016, Gertten received an email from an older French farmer couple, Sylvie and Christian, who finally revealed what happened to Nadine after World War II: she became the romantic partner of Sylvie’s grandmother, the opera singer and spy, Nelly Mousset-Vos. After meeting on Christmas 1944, in Ravensbrück, the two women were separated when Nelly was sent to another camp. No one knows how they reunited several years later, after the war. Yet their bond was unshakeable, and they spent the rest of their lives together in Caracas, Venezuela.

“As a filmmaker, you need something that feels like an impossible mission, because then you get obsessed by your film,” says Gertten. “I was so sure . . . [I was] not going to do anything else more [about World War II]. But then I realized, ‘Okay, the world needs to know about this story,’ and it’s a love story, which is like the biggest privilege, as a documentary filmmaker.”

What emerges is a revelatory unraveling of family secrets — one that uses the best tools of investigative journalism to tell a profoundly human story. Nelly & Nadine elegantly weaves together home movies of the couple with Nelly’s heart-wrenching diary entries from the war, as well as the granddaughter Sylvie’s nostalgic reflections about childhood visits from Nelly. In reconstructing these two extraordinary women’s lives, Nelly & Nadine plumbs the space between coming out of hiding and truly being seen. 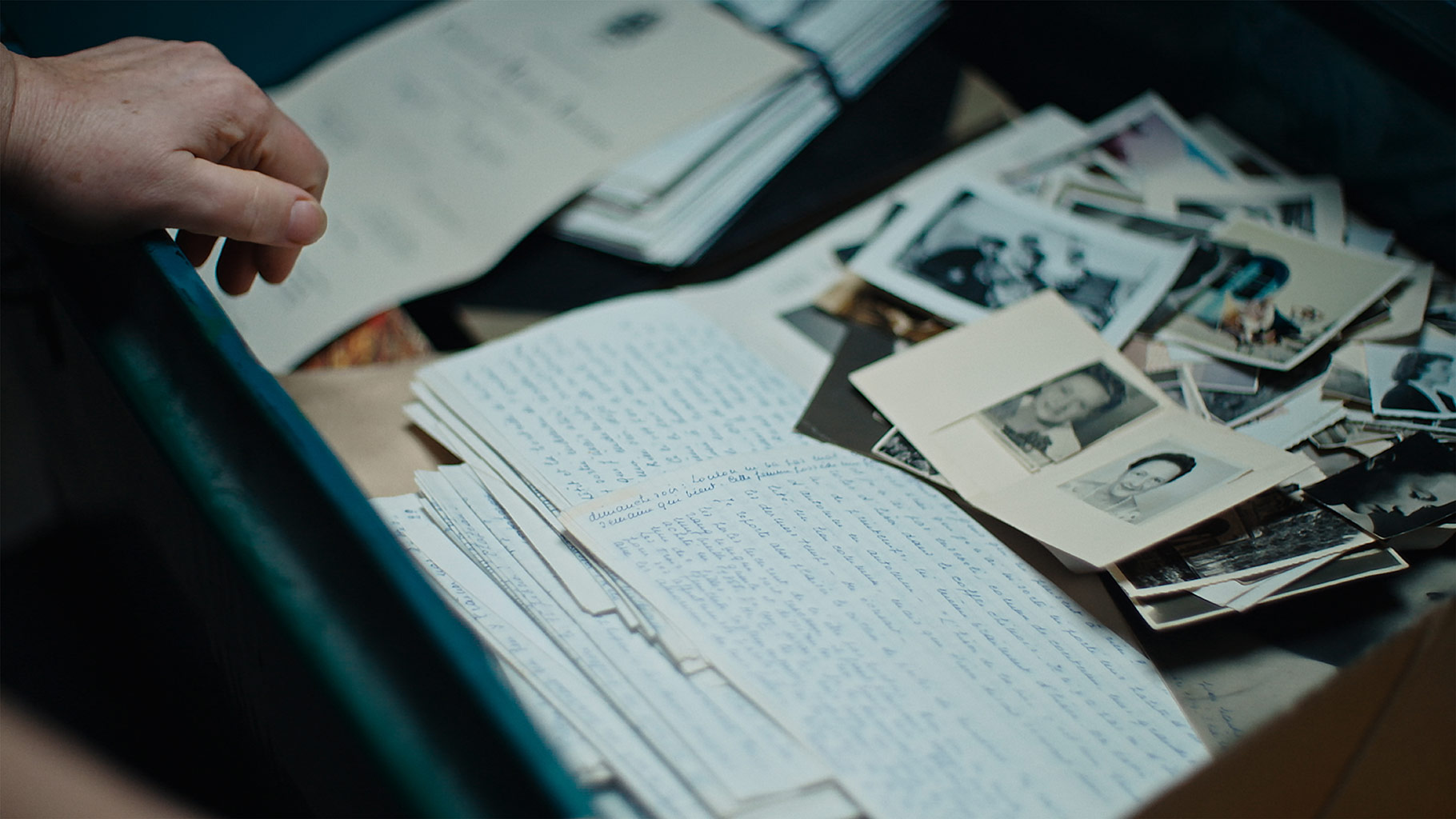 When Nelly & Nadine opens, Sylvie is at the beginning of a fraught emotional journey, trying to reconcile the grandmother of her childhood with the woman depicted in diaries and candid footage. As a youth, Sylvie didn’t think anything of two women living together. When she opens Nelly’s giant trunk of memories at last, Sylvie is surprised to discover a cache of Super 8 films. Largely shot by Nadine, the footage is intimate, festive, and revealing.

When Nelly and Nadine move to Venezuela’s capital, Caracas — which Gertten describes as “a booming oil economy and like a mini New York in those days” — they hosted soirees with fellow socialites, such as the late historian José Rafael Lovera, the son of a banker. At one of these parties, their hands touch on the back of a chair, fingers barely grazing each other. Caught on camera by Gertten, an adult Sylvie observes the footage on her computer with shy interest, slightly befuddled at first.

One of Nelly & Nadine‘s many insights is that the very way that Nadine films Nelly, slowly zooming in on her, expressing devotion. At times, Nadine’s camera captures Nelly in melancholy, staring into a stark backdrop of blue mountains; other times, Nelly smiles straight at the camera, a look of affection for Nadine mediated through the camera. Like a veil or a curtain, the camera shielded their looks. Just as Nelly documented both love and trauma through her writing, so did Nadine through film. Nelly & Nadine spurs the viewer to become a detective, parsing footage and words for significance.

For twenty years, Sylvie has been opening — and closing — her grandmother’s diary. In Nelly & Nadine‘s ingenious structure, these diary excerpts, tantalizingly brief at first, get longer as Sylvie is pulled deeper into Nelly’s past. Nelly’s diary is a beguiling mix of beauty and horror, life and death.

Following a harrowing ride to the Mauthausen camp, Nelly notes 17 deaths and one birth. “How to find the courage to survive?” she wonders.

Yet amidst the grueling manual labor, unforgiving exposure to the elements, and sickness and violence, Nelly holds onto small pockets of loveliness. At Christmas, Nelly meets Nadine, who calls out for her to perform the Italian opera “Madame Butterfly,” and is awed by her voice. Butterfly became Nelly’s nickname for Nadine — just another remnant of the war, converted into tenderness by the passage of time.

From there, the diary alludes to the burgeoning intimacy between Nelly and Nadine. Nelly describes climbing onto Nadine’s bed when no one was around and talking deep into the night. The diary was like a talisman, conjuring memories of Nadine even when they were separated. Sick with fever and dysentery at Mauthausen, the “antechamber of hell,” Nelly writes, “I use all my strength to evoke memories of you. Wait for me, I must see you again.”

“You have to remember she is an opera singer; she’s been reading more classic poetry than you and I will ever read in our lives. Writing has probably always been her way of dealing with things. It’s her therapy,” Gertten explains. “When she ends up in the camps, she starts immediately to write, and the material is not so much about the outer world. She’s writing so much about her own inner world . . .”

“People are still working on this material, and I’m sure Sylvie will write a book about it, and I think the complete diary will be publishes as well,” he adds. 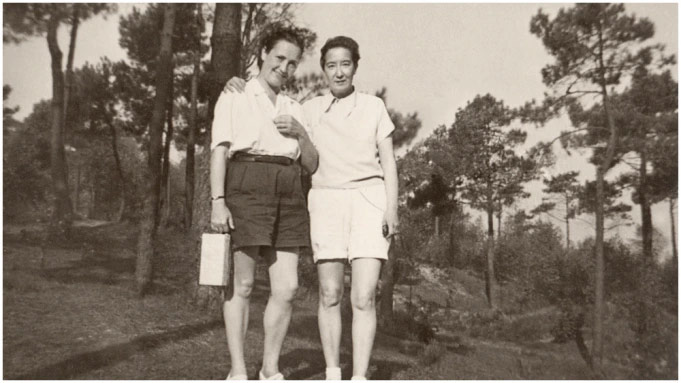 A Stylistic Portrayal of Personal Histories

Gertten pairs Nelly’s words with haunting black-and-white footage whose provenance is never explained, lending an aura of mystery. Rather than using the expected historical photos, he leans into the diary’s surrealism. The footage is chock-full of striking juxtapositions and seeming paradoxes, like a wagon wheel on fire or giant white sunflowers wilting in the heavy rain. Nature changes and decays at double speed. These evocative images are straight out of a fever dream, like a Rorschach test that allows the viewer to indulge multiple interpretations. Breaking out of black-and-white, one sequence of green and yellow leaves swirling in water elegantly foreshadows Mauthausen’s liberation by the Swiss Red Cross.

Representing the diary was a daunting task, says Gertten. “That was one of the filmmaker’s challenges. We have this amazing diary, unique, written inside a concentration camp, poetic language, drama and so on. What do you see when you listen to this? You are not feeling completely confident about that when you start making the film.”

Gertten was inspired to incorporate a “poetic archival layer” from his experience on another film. With the help of a Belgian archivist, he found two hours of material shot by the Belgian filmmaker Henri Storck between 1942 and 1944. Gertten loved how different it was from other newsreels from the time, yet initially struggled to incorporate it.

“But we were testing it out. It looked like we were on acid at some point, it was so crazy, and people told us, ‘Don’t do it, it will never work.’ But they’re such strange images, and there is always something behind what you first see. If you see flowers, not just a flower, it’s something else happening. I liked to use this more poetic language so we don’t end up in straightforward, one-dimensional storytelling.”

At a time when gay relationships were heavily stigmatized, Nelly and Nadine found a way to thrive in the shaky space between being out and being closeted, as their diaries and home videos reveal. They found sophisticated ways to express their love as well as their trauma, as inextricably entangled as those two things were. They lived amidst paradox, making a life for themselves in a foreign country, yet remaining ever-haunted by the war. They expressed love in novel, inventive ways, through an opera, a strip of film, or a holiday. Nelly & Nadine is a gorgeous act of emotional excavation, of not merely remembering, but also reframing a touch, a glance, a word. For Sylvie, it’s a revisionist history that makes bone-deep sense.

Late in the process, Gertten and Sylvie made an astonishing discovery: Nelly and Nadine had been editing Nelly’s diary for publication. They never found a taker, but now, decades later, the world can finally experience it. In making Nelly & Nadine, a heartrending work of art, Gertten is also keeping a promise to these women.