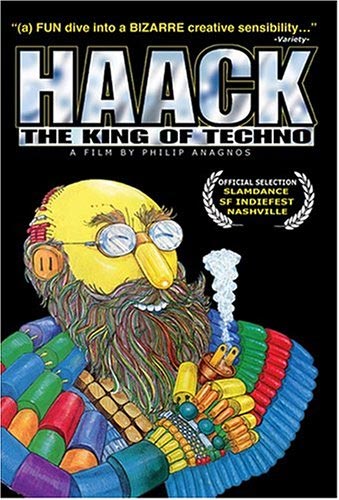 Recently, I had an experience with a friend who basically attributed a huge amount of today’s electronic music and electronic music hybrids to the well-known artist, Aphex Twin. Aphex Twin started his career in the early ’90s, and while he has been extremely, extremely influential in the emergence of and style of contemporary electronic music, there’s one person who is perhaps just as significant, yet does not get enough credit for his contributions.

That person is the Canadian-born Bruce Haack.

Prior to receiving one of Haack’s albums and this documentary in the mail, I had never, ever heard of Haack. A musician who was trained at Julliard, Haack primarily created music for children’s television shows and advertisements, but his personal creations were highly experimental and very much in line with what many bands electro-pop and electronica bands are trying to do today. For example, some of the tracks he did for his Columbia Records’ Electric Lucifer release in 1970, featuring digitized vocals and chiming backgrounds, could very much have contributed to the style of modern bands like Daft Punk. Haack’s reach was extraordinary, and his rejection of standard rules led him to be a pretty inventive musician who was making music no one else was making at the time.

The fact of the matter is that Haack got his start in the ’50s, and was rather well-known throughout the ’60s and beyond. He even appeared on The Tonight Show with Johnny Carson and made regular appearances on Mister Rogers’ Neighborhood, playing a crazy character as well as demonstrating how to use synthesizers.

Haack created many instruments on his own, including homemade analog synthesizers, guitar effects pedals, theremin-inspired magic wands, and Dermatrons, which were similar to theremins, only played on foreheads of humans, using the natural conductivity of the human body (hence, the “derma” in its name). Haack was no doubt a very creative and inventive individual, and it’s important that his story is told and his significance known.

Perhaps Haack’s influence in music is not exactly quantifiable, as most modern electronic musicians do not know about Haack at all. But the ones who do actually know about Haack — such as the members of bands like Eels, Mouse on Mars, and Beastie boys, which are featured in the documentary — revere Haack wholeheartedly. One even stated that he had no doubt he’d have grown up a lot better if he had known about Haack’s music earlier.

Haack: The King of Techno features some interesting archival footage from the ’50s and ’60s, but it is a bit weak on the interview side. It takes interviews from a lot of individuals with nothing particularly enlightening to say, or those who say things without much conviction. Despite well-crafted transitions involving the music of Bruce Haack and black-and-white abstract imagery, the interviews cause some amount of lag in-between compelling footage, making the documentary frankly a bit more boring than it could have been.

Haack’s contributions to chidren’s music are still present in teaching circles today, but for the large part, he remains an unknown individual. I highly recommend that anyone interested in electronic music or instrumentation view this documentary, because it will leave you with a feeling of awe and surprise. Someone as influential as Bruce Haack was in his own time should not completely disappear into history; his story should be spread and told, and this documentary is a start to that.

Purchase the Dimension Mix, a tribute to Bruce Haack featuring contributions by artists like Beck and Stereolab, and help support children with autism. – www.dimensionmix.com