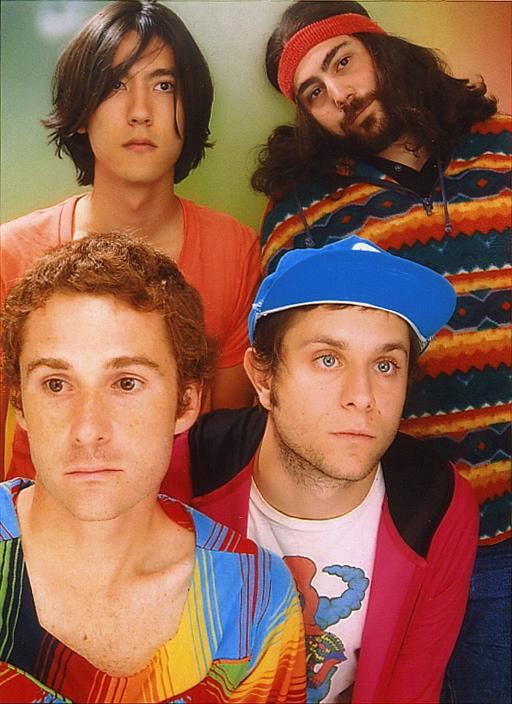 “We don’t want you to only like [our music] because you’re supposed to like it or you like it because it’s cool. I don’t want you to scratch your fucking head. It should be immediate… I think [the new album] just makes our music more effective.” — John Famiglietti With the release of their self-titled album in 2007, HEALTH, clad in tight jeans and neon t-shirts, solidified their place amongst hipsters and teens. But while the group quickly appealed to these demographics, they had alienated themselves from the mainstream, written off by many as musicians more concerned with style than music.
Two years later, their new album, Get Color, exemplifies their newfound maturity as songwriters and renders them whole conceptually. Whereas HEALTH went completely over the heads of mainstream audiences, Get Color is a bit more accessible to the layperson. Its tracks are more discernible as songs, and for the most part, they are no longer just noise, proving that HEALTH are more than a group with just a distinct fashion sense. While still experimental, the songs now harbor more melodies and qualities found in traditional songwriting.

“I think we just got better at writing our songs,” says bassist John Famiglietti. “We don’t want you to only like [our music] because you’re supposed to like it or you like it because it’s cool. I don’t want you to scratch your fucking head. It should be immediate… I think [the new album] just makes our music more effective.”

To drive this message home, the quartet recently come off a tour supporting Nine Inch Nails, and despite getting pretzels thrown at them in Atlantic City, New Jersey, and an equally terrible show in Jacksonville, Florida, Famiglietti has only great things to say about the experience.

“Trent is just about the coolest dude there is, especially for being someone who’s like pretty openly worshiped by all people coming to the show,” reveals Famiglietti. “After [our] first show, Trent was like, ‘Hey, I don’t even know what the hell’s going on up there… why don’t you guys use all the screens behind you?’ We used literally several multi-million dollar LED screens which were like 20 feet high, and infrared cameras were put on all of us… our shows went way better after we had this gigantic light show.”


“We don’t want you to only like [our music] because you’re supposed to like it or you like it because it’s cool. I don’t want you to scratch your fucking head. It should be immediate… I think [the new album] just makes our music more effective.”
— John Famiglietti

With the release of Get Color, HEALTH also created a sweepstakes promotion that is wholly appropriate for a band as approachable and open-minded as they are. Inserted inside each first printing of their disc are golden tickets, which can be traded in for a diverse array of prizes.

“Sweepstakes thing started a few years ago. I think Jupiter was like, ‘Hey man, when we sell the album, we gotta sell something like a baseball card, so there’s a chance you can get a rare card or something,'” laughs Famiglietti. “That’s where we were like, ‘Dude, whoever gets the fucking golden ticket — we’re going to fly him to LA, and he’s going to go to Magic Mountain.'”

That is in fact the grand prize of the sweepstakes, and other prizes, personally crafted by the band, are available as well. They include everything from posters autographed in blood and locks of hair to intoxicated video chat sessions, astrological consultations with Jupiter’s mother, and conference crank calls to prominent indie musicians. Sure, the idea is bound to receive criticism from those who ask, “What does that have to do with music?”, and they’d be right. It all has nothing to do with music, but that’s just fine, because HEALTH are about the artistic process as a whole. In addition to their sweepstakes, they’ve also spread their interests to film and fashion, but none of that means that their music takes a backseat to their other projects. All of their projects merely work together in harmony.

The album’s single, “Die Slow,” is a danceable mix between industrial and noise, and its music video, produced by Famiglietti, pays proper homage to the song by capturing amazingly well HEALTH’s use of rhythm and electronic instrumentation. Scrolling erratically through images of women standing stoically, crowd members swarming, and the band performing, the video seems almost like an electric device gone haywire.

In addition to self-produced videos, the band will also be starting up a web mini-series –- an idea that isn’t exactly new in this technological age — but HEALTH aren’t bashful in saying that they’ve gleaned inspiration from past rockstars.

“We’re going to have an Internet TV show called HEALTHvision, which will star members of the band. Kinda like the Monkees’ show, but it’s going to be way stranger. And that was a really strange show,” explains Famiglietti, noting that the show will run a variety of ideas, from dramatic mini-series to sketch comedies.

“It might be terrible, by the way,” he makes sure to add.

The band is also moving forward with their interest in fashion. Anyone who is familiar with HEALTH’s T-shirts, which utilize bright colors and clean geometrical designs, will be excited to hear about their upcoming clothing line, for which HEALTH will work with independent designers to create high-quality, hand-sewn, one-of-a-kind items.

“My goal is that [everything] will be twenty dollars cheaper than your average [indie boutique’s] stuff,” says Famiglietti. “Obviously, [the clothes have] gotta be kinda expensive cause they’ve gotta be hand-made in small batches, and it’s a fucking pain in the ass… but the goal is at least twenty dollars cheaper.”

The clothing line is set to debut in early 2010, and it is yet another artsy output for the band to throw into the face of skeptics. For no matter what the skeptical might say, no one can deny that HEALTH are obviously doing what they love, and that’s the strongest argument they have going for them.

Written by Vee Hua 華婷婷
1 comment
Motion Turns It On – Kaleidoscopic Equinox Album Review
And Then There Was You – What Doesn’t Kill Us Makes Us Stronger Album Review
wpDiscuz
1
0
Would love your thoughts, please comment.x
()
x
| Reply