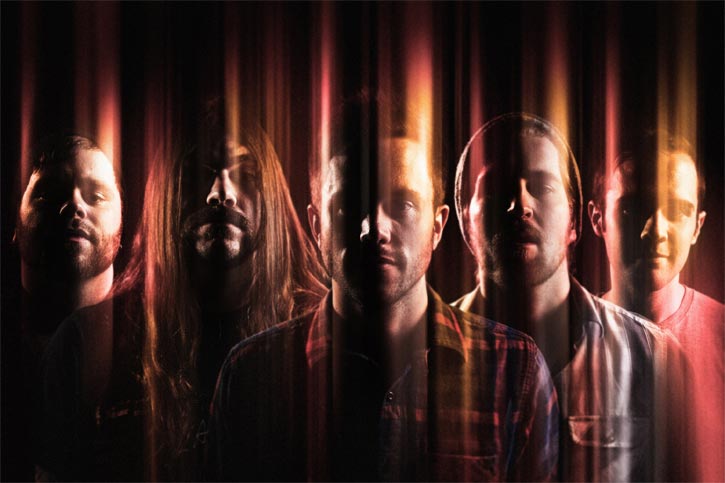 Between The Buried And Me Band Interview

“We don’t have time to sit back and not pay attention.” — Tommy Rogers

From the melancholy opening bars of The Great Misdirect, solemn lyrics invite you in, and with a moment’s glance, the opening track, “Mirrors,” becomes flush with the interplay of mellow meandering strings and surrender of cymbals. As the album progresses further into the flight of airborne guitars, there is the overwhelming feeling that Between The Buried And Me still haven’t lost their tradition of screwing with hardcore kids. What you can expect from The Great Misdirect is an eclectic odyssey through the band’s mad scientist exchange of metal atmosphere and indiscriminate stylistic direction. All that is required is the listener’s awareness that nothing is as it seems in BTBAM’s realm of endless trap-door.

“I think the weirdest thing about this record is that it kind of seems like a concept record, but I didn’t intend [for] that at all… A big thing for us is not forcing any music… I think if you like writing for the sake of being technical or weird, it will sound that way,” vocalist Tommy Rogers discloses with a smirk. “I think with us, we just write what is natural to us, and it happens to be some fucked up shit sometimes.”

Tommy Rogers may be one of the most remarkable frontmen in the world of extreme music today. With BTBAM, he has risen from the beginning of extreme metal to become a completely new musical creature, birthed from the band’s joking defiance of musical laws. He has the reputation of a frontman who breathes fire, yet, in person, continues to be the same humble gent with a slight Southern drawl that he always was.

“I don’t know if we were motivated because Colors did kind of gain us a new audience in a way, or that we had more motivation on this record to outdo ourselves, ” Rogers calls up in a serious tone. ” I think we had a lot of doubt; people, for some reason, feel a, ‘They-can’t-outdo-Colors kind of deal.’ It’s not that we are trying to outdo Colors; it’s just we want to write a different record and write the best record we can without having anything like that in our mind.”

The band’s previous effort, Colors, ushered in a new age for the band, which involved their prodigious escape from the metalcore tag . But in giving fans The Great Misdirect, BTBAM not only signal their growth on a planetary level, as masters of their own realm of music, but affirm that the planets need not always be aligned for them to do so again.

“I guess the writing process was somewhat similar to [that of] Colors; the thing about us is we don’t really have a certain process,” Rogers explains. “It’s different for each song; normally when we start a record, we write a lot on our own for a few months, kind of to get our heads in the right space and to get a lot of ideas together individually… then we start to put things together.”

“It’s not that we are trying to outdo Colors; it’s just we want to write a different record and write the best record we can without having anything like that in our mind.”
— Tommy Rogers

“I guess when we had the music written, I was trying to think of ways to put lyrics together with it, and for some reason, all the songs really created stories when I listened to them, because they take you to some different places,” explains Rogers. “[The record has] some real dark moments and some real uplifting moments; when I hear these songs, I think of stories, so I wrote stories.”

As a narrative, The Great Misdirect is a tale possessed by BTBAM’s sharp wit. It serves as both a nod to musicians and as a disparate kaleidoscope of meshing moods and themes. The politics of mythic consciousness? Weapons of apocalyptic enslavement? These are subjects which can find explanations in all areas of the musical spectrum.

At six tracks and almost an hour long, the album isn’t meant to be one continuous track, but features the fewest tracks of any of the band’s albums. It closes out with the pseudo-metal opera, “Swim To The Moon,” which clocks in at almost 18 minutes.

“The cool thing about our music is that we really push ourselves with each record. When we write our songs… we can’t play those songs live,” says Rogers, prefacing his pause with a smile. “I think that’s why we get better with each record; because we write music that pushes ourselves, it’s a challenge for us to play. We work non-stop to get the songs written how we want, to the point where we can play them live, and when it’s all said and done, we don’t want to write music we can’t play live.”

While some songs dive right into the band’s trademark extremism, another may begin with a jaunty piano frolic, only to coalesce into the drifting throes of bells and grand ascension of melody, complete with orchestral scoring.

“We will sit back on [a finished song] for weeks and change it over and over and over. That’s the way we’ve always done it; we’re over-perfectionists. I think when you force stuff and write things quickly just for the sake of it, it sounds that way,” says Rogers. “With us, if it takes a year-and-a-half to write a record, then that’s how long it takes.”

Whether it be with the sudden neigh of a horse or the whistle announcing drummer Blake Richardson’s colossal solo, the members of BTBAM have labored to keep fans’ probing ears busy for years to come. And with a live show that flexes the members’ performance muscles on a nightly basis, Rogers and company are sure to gain new converts with their tour schedule, even if the converts concede to the band’s will under strange circumstances.

“We have toured with some different kinds of bands, and we’ve never had a bad tour. We’ve played in front of Dragonforce fans, hardcore kids, Children Of Bodom fans. You have all these different types of people, and with a lot of tours, we get on stage and we’re like, ‘Fuck, these people are going to hate us,'” jokes Rogers, “but it always works out… I really feel comfortable that we have music that can, in some way, appeal to everyone. Even if they don’t really like us, there will be moments when they can say, ‘I kind of dig that.'”

On their current tour, Rogers has had the opportunity to play music alongside many of his musical influences. “I have looked up to [Devin Townsend] for years and years as a songwriter and vocalist… Same thing with Cynic; I got Focus when I was 17. I think the greatest thing is when you meet these bands, and they’re awesome dudes.”

The future is bright for BTBAM, as their own unique creation has reached the upper echelons of those who have inspired them. But with the honor of making a style of music uniquely their own, the members of BTBAM now have the greater responsibility of being inspirational forces for the progressive music of the future.

“Granted, our music isn’t as intense as it used to be, [but] it still has so much going on,” says Rogers. “We don’t have time to sit back and not pay attention.”