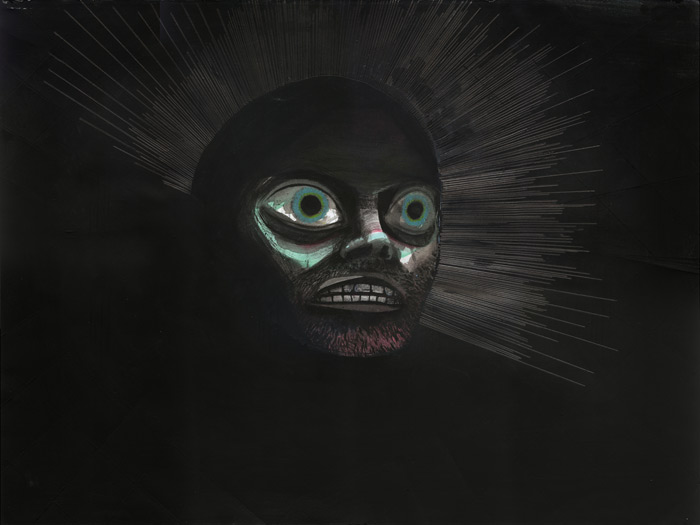 “My goal is to use my emotional connection to the metaphysical imagery of Christianity to heighten my ability to articulate the psychological truth of my everyday life.”

2010 began on a dark note for artist Christopher Davison. His Disasters Are People Too series kicked off the year, and much like a poet or musician wearing his heart on his sleeve through words, Davison displayed his innermost feelings through strokes on canvas. The series was a reflection of the year 2009 — a difficult year of transformation of Davison. Through the black-and-white gouache paintings featuring dismembered, mangled body parts floating through dark landscapes, one got the sense of incompleteness, and even the lack of gravity in the pieces did nothing to ease their weight. 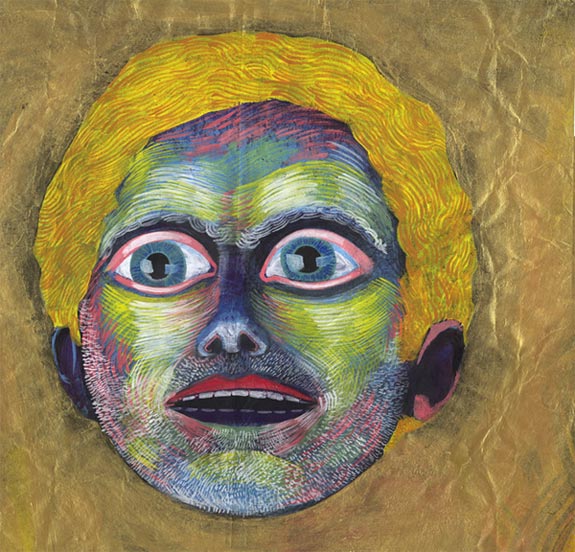 “Overall, [2009] had me feeling like I had been knocked off my horse,” Davison explains. “The economy was one thing, but I was also trying to push my art into new and unknown territory. It took the whole year for me to really feel like I had the brushes under control.”

For the first time, Davison began relying almost exclusively on gouache, as opposed to following his previous mixed media routine, which included the use of inks and pens. The darkness pervading the Disasters Are People Too series was heavy, but it was necessary fodder for Davison to move forward. His newer work is brighter and more colorful, and features what Davison calls a “genuine marriage” between his love for rich blacks and colors. They are well-balanced and seem to perfectly parallel Davison’s personal tastes.

“I’ve always been a sucker for melancholic music and films. No one really borrows movies from me because when they look in my cabinet, they see Ingmar Bergman, Adam Curtis documentaries, or Jan Svankmajer animations. Likewise, the albums in my heavy rotation always sound better at night or in the winter. So, if media indicates anything, it’s that color may come and go, but black is here to stay.”
– Christopher Davison

“When the work was more colorful, I was being inspired by a lot of contemporary drawing I was seeing at that time… but I’ve come to realize that as much as I enjoy the work of such artists, my studio practice takes me down a very different path,” Davison reveals. “I’ve always been a sucker for melancholic music and films. No one really borrows movies from me because when they look in my cabinet, they see Ingmar Bergman, Adam Curtis documentaries, or Jan Svankmajer animations. Likewise, the albums in my heavy rotation always sound better at night or in the winter. So, if media indicates anything, it’s that color may come and go, but black is here to stay.”

Just as Davison’s color palette is often reflective of his moods, his subject matter is reflective of his surroundings. As an art teacher and an occasional freelance designer, Davison is constantly inspired by the residents and locations of Philadelphia, where he is currently residing. The characters he includes in his works are examples of this.

“There is a wide range of interesting looking people, places, and things here in Philadelphia, so I go around taking pictures in my mind, and whatever captures my attention follows me into the studio for the day,” explains Davison. “Philadelphia is extremely rough around the edges, and I’m thankful in a way for that because it feels very real and that kind of realness is essential, I believe, for artists to feed off of.” 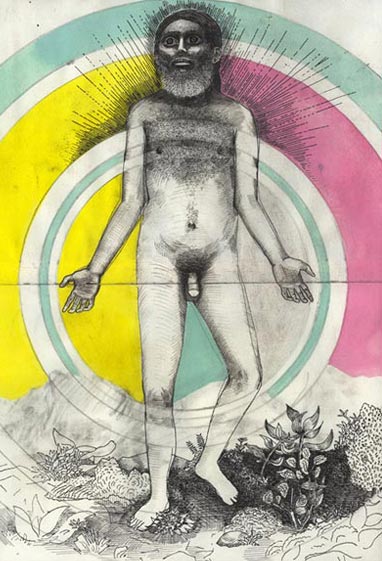 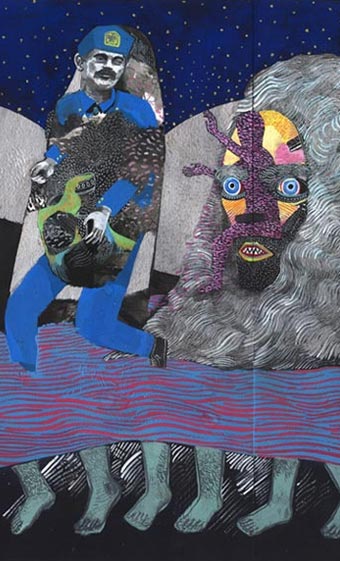 Another influence that Davison holds near and dear to his heart lies in his upbringing. Religious iconography and themes are heavy in his works — the result of growing up with a father who was very Catholic and a mother who was very anti-Catholic. While not necessarily religious himself, Davison connects emotionally to religion, and the influence is shown in his use of phrases like, “Jesus Is Lord” and pieces entitled Purgatory. Most interesting of all is the fact that Davison’s pieces don’t seem to dish out any justice; they seem neither pro-religion nor anti-religion.

“On one hand,” he begins, “I am fascinated with the creativity and wealth of imagery to be found in the Old and New Testament. On the other hand, going along with Nietzsche, it is disturbing to have a faith that treats this world as merely a test for what’s to come… it would be wrong to read the work as promoting Christianity. My goal is to use my emotional connection to the metaphysical imagery of Christianity to heighten my ability to articulate the psychological truth of my everyday life.”

As a curious and hard-working artist, Davison is constantly on the hunt for ways to grow his method. More traditionally, he will be learning the tricks of oil painting from Rebecca Saylor Sack, a painter and good friend of Davison’s. But his other methods of learning are a little less straight-forward and much more experimental.

“My goal is to use my emotional connection to the metaphysical imagery of Christianity to heighten my ability to articulate the psychological truth of my everyday life.”
– Christopher Davison

In September, Davison will showcase his new works at Fred Torres Collaborations in New York, in a joint show with artist Kristofer Porter. To prepare, the two are doing a series of back-and-forth responses to one another’s drawings. Each artist is limited to thirty minutes per drawing, and all responses must be returned within 24 hours. It’s a relaxed exercise between friends, but because it adheres to a rigid schedule, the exchange has helped Davison understand the importance of putting constraints on his otherwise completely free-form style.

“It’s not uncommon that I overwork something in the studio, so I’ve actually been keeping a closer eye on the time when I’m working on other larger work,” Davison says. “Time gives a great structure to the otherwise completely intuitive nature of most of the other creative decisions I make.” 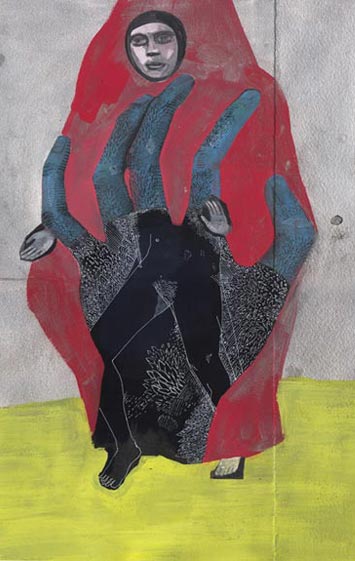 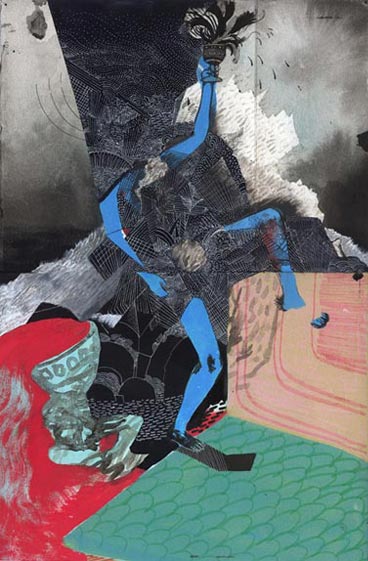 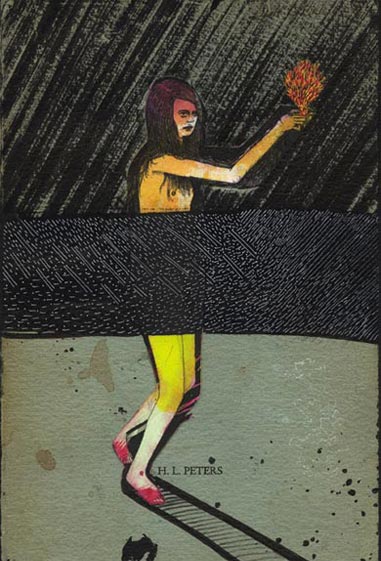 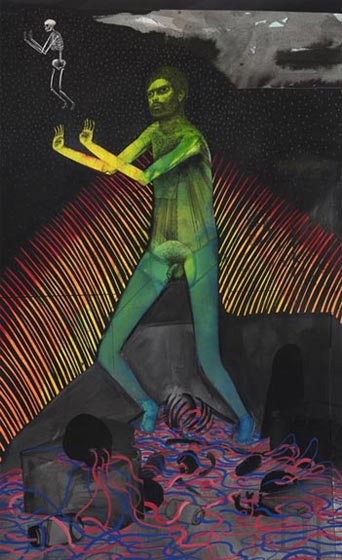 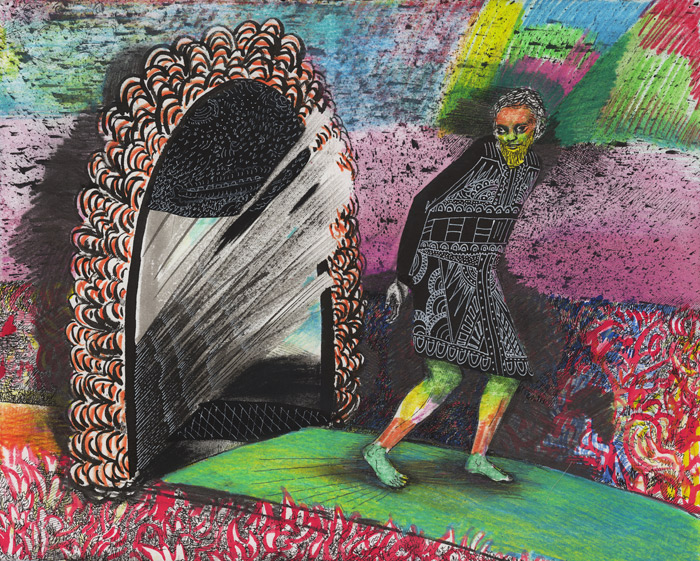 Davison’s latest pieces run as large as 22″ x 30″, but he will be working on even larger pieces later this summer. Undergoing large-scale works is a constant exercise in figuring out what works best, because not everything comes smoothly the first time. Davison has to apply an experimental approach in order to make the process work.

“Typically, the super-large work collapses under its own weight, but it’s a great challenge to investigate how scale affects mark-making,” explains Davison. “Something you do with very little thought and the flip of a wrist on a small drawing suddenly requires a strong impulse and the movement of your whole body through space… you just have to step back from it quite often to make sense of it. ”

Davison’s openness to experimentation also extends to his presence on the internet. Periodically, he gives out high-resolution, print-quality downloads of his images so that anyone with an interest in using his art to create art can do so, worry-free.

“A while ago, there was this street artist in the Ukraine who sent me an email to tell me about his work and compliment me on mine. When I checked out his Flickr site, he had some T-shirts that were essentially badly traced copies of some of my drawings; it was pretty blatant,” recalls Davison. “At first, I was kind of pissed off, but then I thought it was kind of wild and completely fair that if I’m putting these images out there, they could be used for whatever people would want to use them for. So long as they aren’t making a lot of money off of them, I don’t see a problem with it.”

With this uncommon collaboration of sorts, Davison hopes to create an open dialogue with other artists. He encourages anyone who decides to remix his art to send him pictures showing him what they came up with.

“As I understand it,” he says, “Walter Benjamin’s idea of the multiple was that the more copies there are of something, the more singular and unique the original becomes.”

As Davison hooks in more shows and becomes more well-known in gallery circles, he is discovering aspects of himself that he never realized before. At the root of it is a subtle confidence in his work.

“I’m learning what it means to be an artist whose work has been presented to the public by gallerists, bloggers, and individuals. Getting some attention from your art is a strange thing that can be flattering on one day and frustrating the next,” Davison says. “The important thing is to stay absolutely focused on pursuing work that you believe to be true and meaningful, despite the compliments or criticisms you hear along the way.” 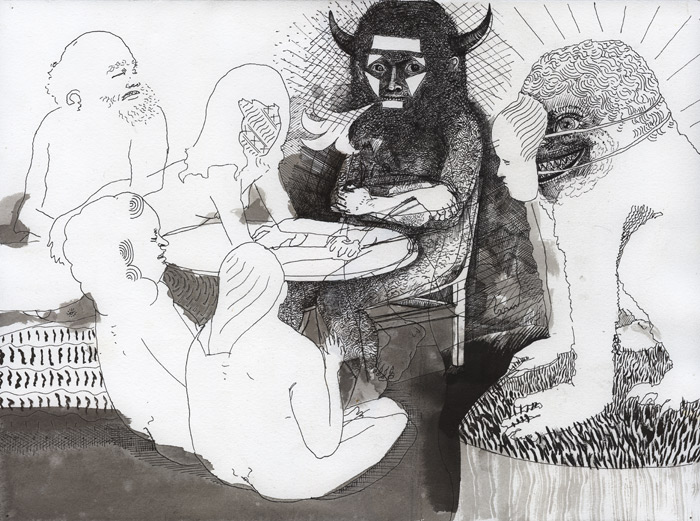 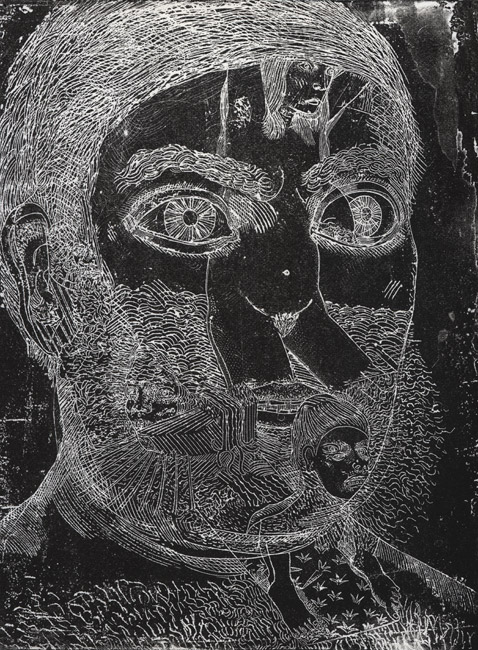