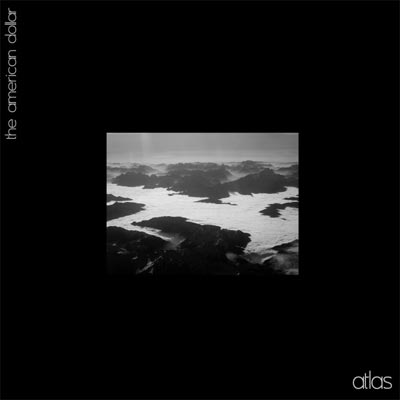 There is a tendency to label anything instrumental as being post-rock. I’ll take it in stride as I know that genre tags are just that — something used to perk the interest of your listeners. They’re tags used to get them to pick up the album, or download it, or just find it somewhere. The duo American Dollar take a minimalistic post-rock approach and add a healthy dose of electronics on their new album, Atlas. The final result is something that has serious best record of the year considerations.

The album opens with “A Few Words”, which brings in a delicate piano line over synthesized beats and shoegaze meandering. American Dollar flex their true instrumental muscles right off the bat. There is no grand crescendo which has become the hallmark of all too many bands in the genre. Rather, halfway through, the pianos die and the song shifts to swirling guitars, delicate rock drumming, and an eerie synthesized line. As it all starts to get going, American Dollar bring it all back to the piano line that held the song’s ground for so long, fading out gently and beautifully into the soundscape the duo just spent five minutes painstakingly creating.

This eerie electronic tone persists throughout the album and adds a soundtrack-like quality to the whole affair. It is reminiscent of some of Clint Mansell’s work, in that each song holds its own feeling and emotion while still remaining true to the album as a whole. “Circuits” continues the tradition of using the guitars to instill the rock and roll, and the synthesized, almost hip-hop-like beats, persist throughout. In a trance-like way, electronics echo in and out of the musical cavern the duo play in. It is the use of the electronic aspect of their sound that really separates American Dollar from the rest; they’re not manufactured enough to make it all the way into the realm of electronica and not distorted and guitar-driven enough to bring it all the way into the realm of rock. They are striking their own delicate balance here and carving their own niche into the very carved-out genre of post-rock.

Atlas showcases a band that knows exactly what they’re searching for. American Dollar trudge across the world in a straight and focused line, calmly climbing the tallest of musical peaks and just as calmly guiding you back down through the haze, the fuzz, and the emptiness that comes with it. In the end, American Dollar are making a whole lot of something out of a whole lot of nothing — and sometimes that is the most beautifully-made music of all.

I have been following TAD for years now since a lucky albeit accidental discovery on myspace. it has been a joy to watch the band evolve. Atlas is an amazing record and defies labels or genres. quite simply, it is an exceptionally enjoyable album to just sit and listen to