“There is a certain freedom and release associated with this transformational and transcendent state. That release from the boredom and restraints of life can be incredibly uplifting.” — Matt Scharenbroich

Through the years, long-time collaborators and friends Lazerbeak and Minneapolis video artist Matt Scharenbroich have worked together to match their passions with one another’s. In this feature below, we look back at their projects together, and Scharenbroich comments on his latest video for “Life Every Voice”, which is a rippling animated delight that falls downwards through glitter and varying levels of psychedelic intensity.

INTERVIEW WITH MATT SCHARENBROICH CONTINUED BELOW

“The falling in the video could be paralleled with that of Alice falling down into the rabbit hole or the sensation of one’s body falling into a dreamy hypnotic state. There is a certain freedom and release associated with this transformational and transcendent state. That release from the boredom and restraints of life can be incredibly uplifting.” — Matt Scharenbroich 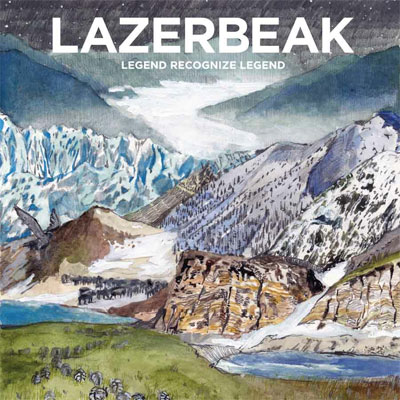 You and Lazerbeak have worked together quite a few times. How did this artistic collaboration first form, and how closely do you work together to create a final product at this point?

Beak and I have been friends, bandmates, and artistic cohorts since we were both teenagers. We are ancient bros. This most recent collaboration came out of my work on Lazerbeak’s Legend Recognize Legend album artwork and series of music videos I had made for the album. I’m a gigantic fan of everything he makes and always psyched to be a part of the visualization of his epic music.

When the LAVA BANGERS record was nearing its release, Beak approached me about making a video for the song “Lift Every Voice.” In a wonderfully open way, he left the visuals up to me and we worked together loosely from there. I had a basic treatment in mind that revolved around a central figure journeying through the depths of a fantastic planet, and naturally Beak was interested. Our collaboration was casual, the end result is a product nurtured by Beak’s constant suggestion to “…make everything crazier.”

What mediums are being used in the music video, and how long did illustration and editing take from start to finish?

The music video was made using a combination of traditional animation techniques and 3-D animation software. The hand-drawn figures were based on video of the movement and gestures of my dancing body, and rotoscoped frame by frame using ink, graphite and watercolor. Using Cinema 4D, a program designed for 3-D modeling and motion graphics, helped speed up the process of creating the backgrounds. However, I was new to this powerful software and the process felt like a toddler trying to operate the Hubble Telescope. The whole project took around two months.

“Lift Every Voice” is a very celebratory song, with instruments and visuals to match. What is the concept or theme behind the song, and why does the sparkly man fall downwards though the music sounds so uplifting?

From the moment I first heard this song, it has given me chills. Like all of Beak’s beats, it contains so much joy. It is like a choir of exceptionally funky angels, ushering the listener into a ethereal, majestic celebration. The main character of the video is on this journey. The falling in the video could be paralleled with that of Alice falling down into the rabbit hole or the sensation of one’s body falling into a dreamy hypnotic state. There is a certain freedom and release associated with this transformational and transcendent state. That release from the boredom and restraints of life can be incredibly uplifting. I hope the video translates that joy.

Would you agree that there is a resurgent interest in color, synesthesia, and kaleidoscopic music and visuals? If so, why do you suppose that is, and do you think such aesthetic choices have long-term implications?
(Also answered by Luke Wyland and Takafumi Tsuhiya for AU’s “OJ” and “Ida Walked Away” music videos.)

I used kaleidoscopic color, hypnotic, psychedelic visuals to convey the consciousness-shifting joy that “Lift Every Voice” gives this listener. It’s wonderful to open that floodgate and operate in that aesthetic realm. Incredible advances in digital technology, and digital distribution has given artists, filmmakers, and musicians the tools to access wonderful new worlds of imagination and a way to share their unique ideas with the world, instantly. That loop between artist and audience has shortened immensely. It’s an incredible time to be a person working in the arts.

Perhaps the resurgent interest in these psychedelic elements in visual culture might be simply be understood as a way for artists to communicate to the viewer an immediate visual language that we now know through research in neuroscience and quantum physics to be the operating language for the layered, complex and multidimensional visualization of the interior world of the mind and its infinite capacity for creation.