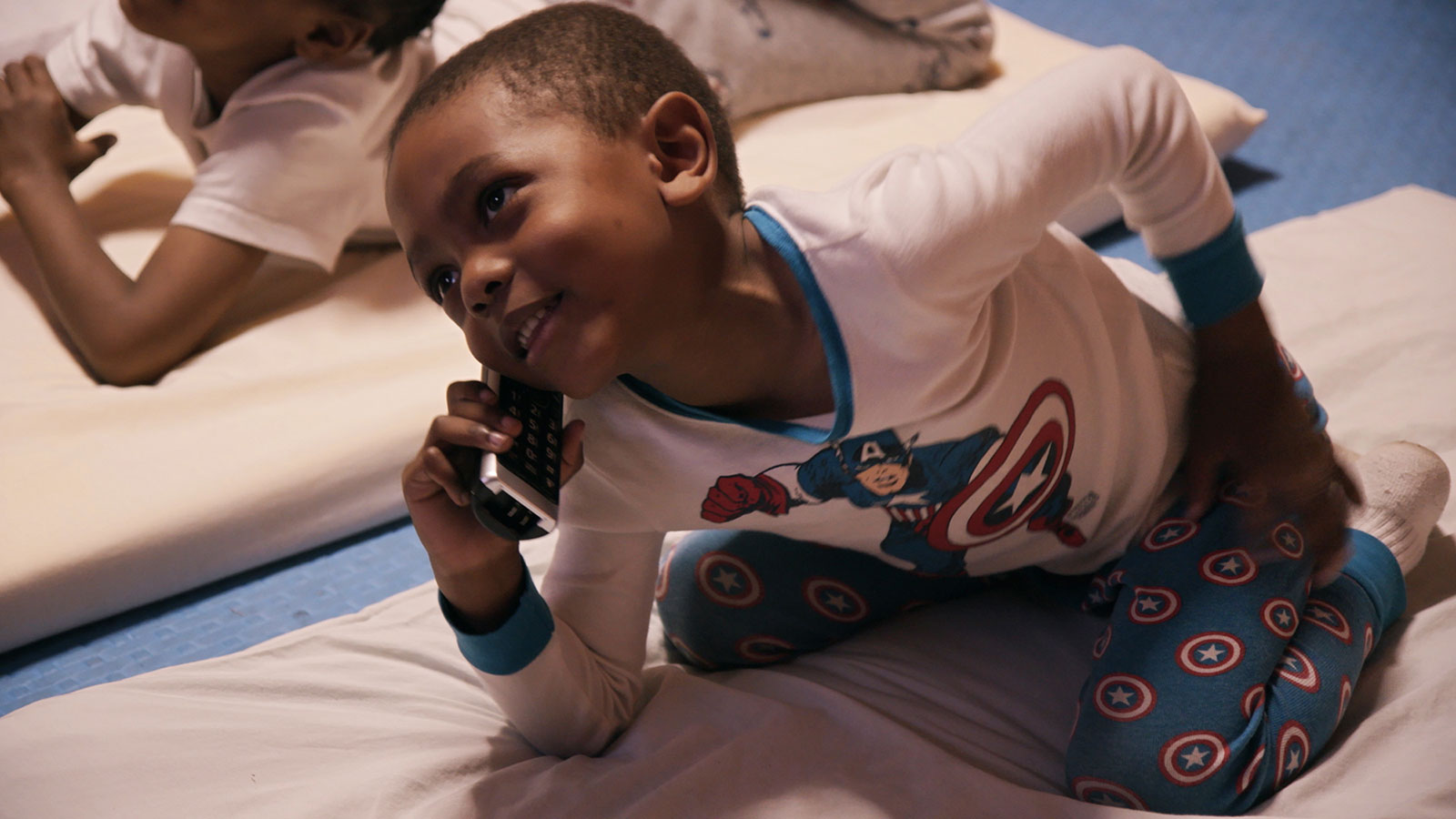 Through the Night Documentary Film Review: Caregiving as Essential Work 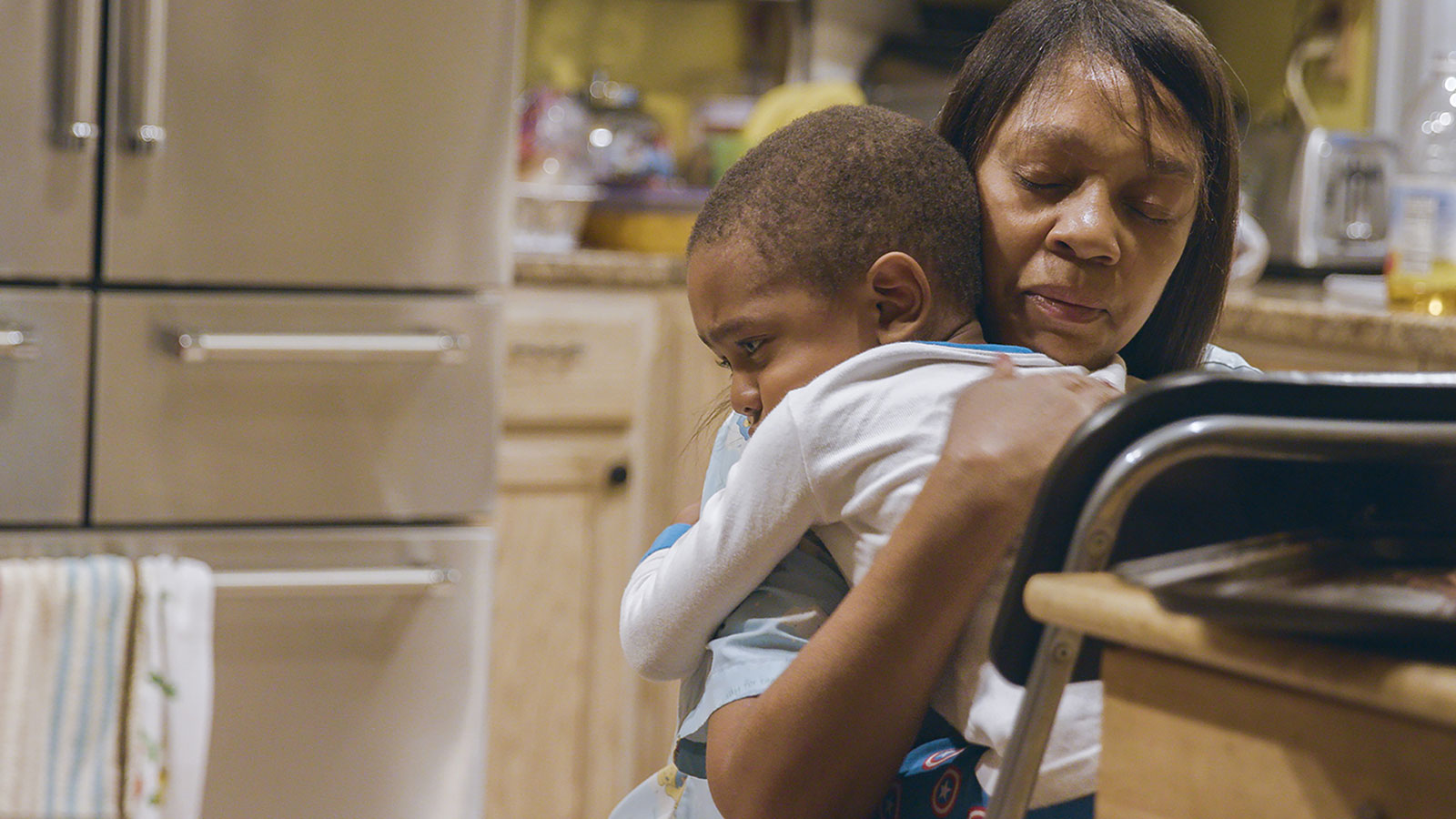 In Through the Night, a lovely new documentary by first-time director Loira Limbal, daycare owner Nunu coaxes an anxious young boy to put aside his electronic tablet and be more present with the other kids. With a rueful laugh, she asks, “I’m down on my knees; are you going to help me up?” He tearfully agrees, gives her a hug, and then goes read a book.
The intimate interaction is just one of many captured in the film, which centers on Nunu and Patrick, a couple who run Dee’s Tots in New Rochelle, New York, and turn overnight stays into sleepovers, or arts and crafts sessions into lessons on respect. By portraying intimate interactions between staff, children, and parents, the documentary reveals the ways in which daycares like Nunu’s serve as lifelines and extended families for working parents that labor around-the-clock on minimal salaries.
As Limbal states in an interview with the San Francisco International Film Festival (SFFILM), “In a moment like [COVID-19], right where all these systems are collapsing, my hope is that we can finally look at everything that has not worked for decades if not centuries in the U.S.” 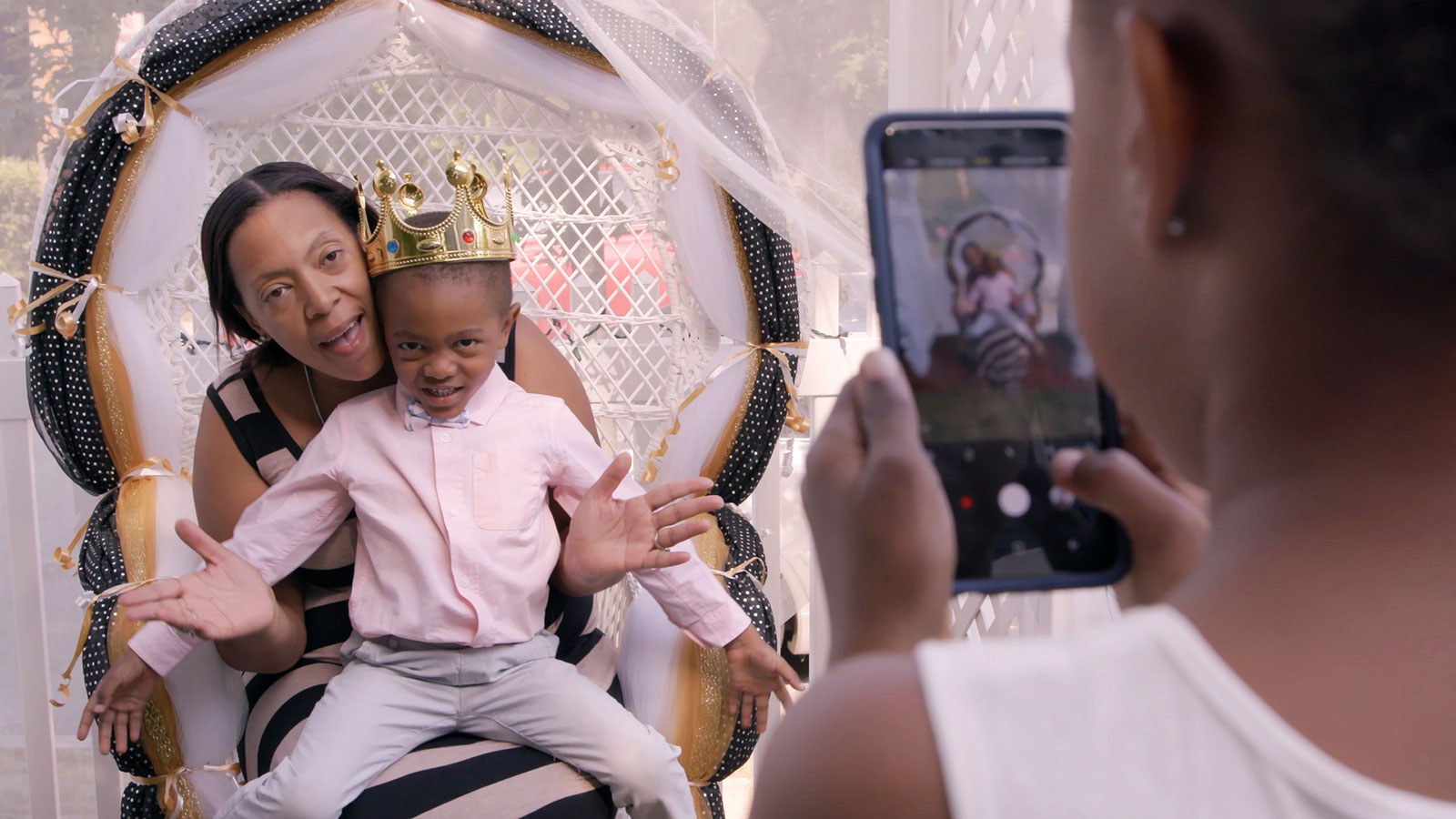 Through the Night, which focuses on the everyday rhythms of Nunu and Patrick’s days, is primarily an ode to the inherent dignity of effective caregiving. It finds moments of quiet transcendence in the mundane, like Nunu caressing a child’s forehead, or a mother rubbing lotion on her son’s hands. Shot in cinéma vérité style, the film does not rely on editorializing to praise caregivers; the camera does that work by focusing on details, such as close-ups of a wall in Nunu’s home plastered with photos of kids or shots of Nunu and Patrick hugging community members at a Thanksgiving parade. As Limbal elaborates, Through the Night embodies the notion that “the everyday, the minutia, is ultra-important and is worthy of a patient, curious lens.”

The self-sacrifice of many caregivers, which is all too often underappreciated labor, is starkly visible throughout the film. In an ominous scene at the doctor’s office, Nunu explains the constant pain in her shoulder and numbness in her hands with the politeness and patience of someone who has managed a thousand squirming children. After informing her she has tendonitis, the doctor advises her to avoid using her arm muscles. But Nunu’s job requires constantly picking up toys, cradling kids, cleaning floors, and fixing messes. Just by the hesitance in her voice, the audience can guess where her priorities lie. The next shot is Nunu scrubbing the counter while wearing a cheery pink pajama shirt patterned with owls. The children clearly come first.

This sacrifice also takes subtler, more ambiguous forms. In another scene, Nunu describes her grueling schedule: she works both nights and days, alternating with her husband Patrick. Sometimes she’s up for 48 hours, yet somehow manages to never snap at the children in her care. “My day’s always long,” she says. She confesses, with chagrin but not shame, that her job has impacted her relationship with her own kids, because they’ve always had to “share” her with other children. In moments like these, Through the Night demonstrates the necessity of caregivers without hero-worshipping them or flattening their struggles into “inspiration.”

Through the Night looks at both sides of the caregiver-parent relationship. Through profiles of women like Marisol, a bilingual mother of three working as many jobs, the film highlights the day-to-day precariousness of the lives of so many working parents. Marisol is stuck, as though treading water until she can get to shore, working three part-time jobs at a restaurant, a grocery store, and a dentist’s office while looking for full-time employment. It’s clear that her children have absorbed some of her worries, as much as she tries to shield them from her struggles. In a telling moment, one of Marisol’s kids says that she doesn’t want to grow up because she doesn’t want to have adult responsibilities like paying the bills.

Yet Marisol’s boss has refused to let her work more hours at the restaurant, while also shaming her for using daycare services. Taking her on as a full-time employee would necessitate giving her benefits, and his business can’t afford that, he says. This moment encapsulates the Catch-22s of many working parents everywhere, as well as how the shortcomings of America’s social safety net too often get coded as individual moral failings. The high costs of both health insurance and childcare are mutually reinforcing deprivations resulting in challenges for both business owners and employees. As Limbal tells SFFILM, we have an “economy and a system that is very barbaric. We have arrived at a point in the U.S. brand of capitalism where we’ve normalized people working multiple jobs, and still having to choose between paying rent and buying groceries.”

In one of Through the Night’s most heart-wrenching moments, Nunu wonders about the parents who can’t afford daycare. What sacrifices are they forced to make? Where do their kids go? This economic insecurity, a daily reality for many Americans, is the thread running through Limbal’s film, and has only become more pressing during COVID. Dee’s Tots, because it serves the children of essential workers, has been one of the few in New York allowed to continuously stay open. Through the Night masterfully illustrates that daycare for many children isn’t just a place to stay safe and fed while their parents are at work. It’s also a family: a nurturing environment that teaches kids how to share, listen, and respect others; a space for healthy socialization that’s desperately needed right now. Through its tender and candid portrait of each of its subjects, caregiver and parent alike, Through the Night emerges as more than just a critique of economic inequality. It is about those who heroically do the difficult, underpaid, yet profoundly necessary work of caring for the next generation.

Through the Night is screening at Portland International Film Festival at Northwest Film Center in March 2021.

It also screened at Northwest Film Forum (Seattle) in December 2020. A portion of all ticket sales was donated to the Essential Care Fund to support childcare facilities nationally. If you are inspired by the film, please consider donating directly to the Essential Care Fund. Money raised will go directly to daycare providers to help them continue to provide services for essential workers during the pandemic. * Closed Captions are available.

Through the Night Film Trailer 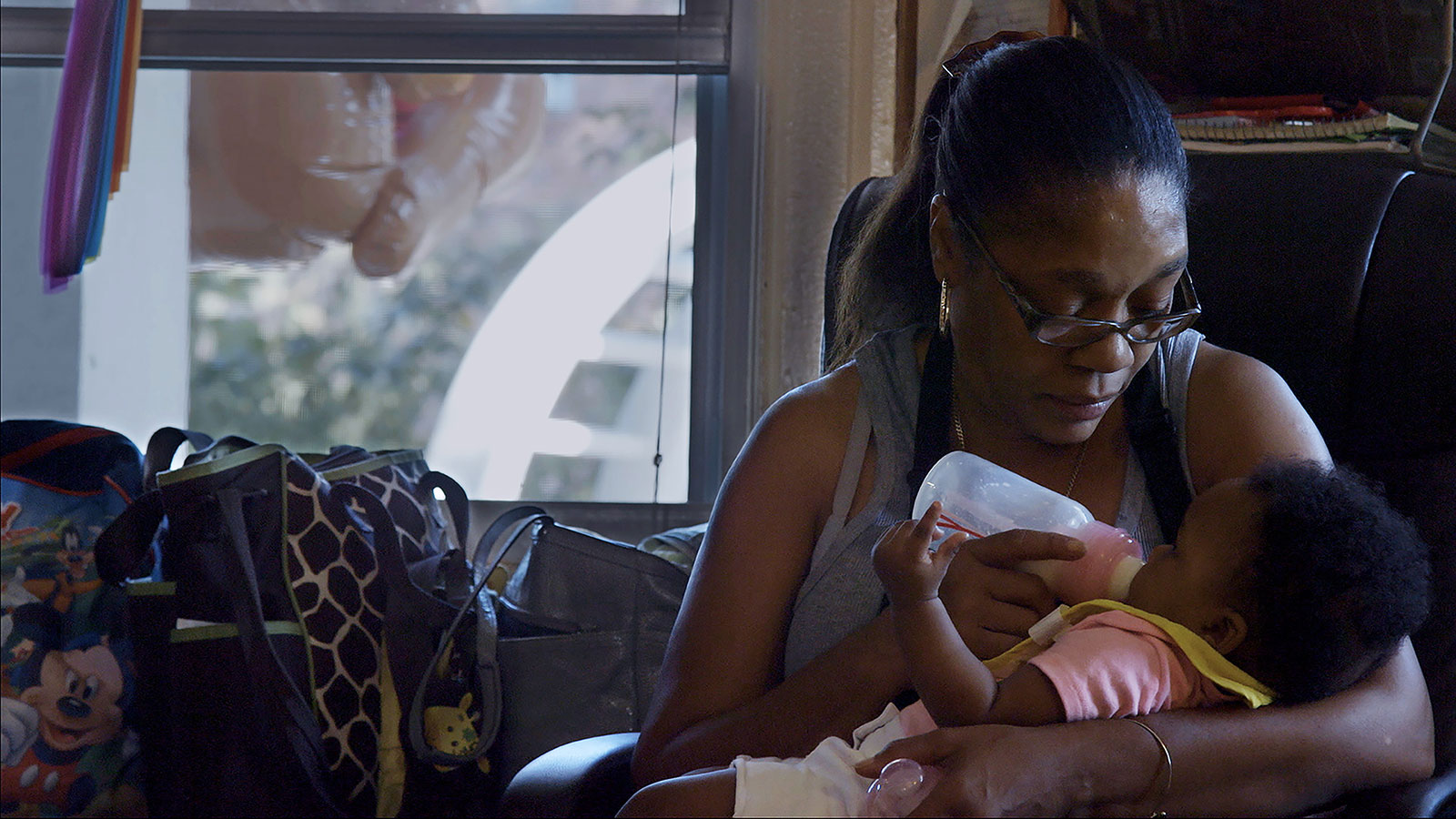