Vee Hua 華婷婷6 min readMay 20, 20211 comment
By the time I enter the spacious warehouse in Red Hook, Brooklyn, Danish-Kenyan movement artist Phyllis Akinyi has already begun her performance. I hear her before I see her. A repeating loop plays overhead, with an off-kilter rhythm and the occasional sonic clatter. A collage of Spanish refrains phase in and out of one another, at times overlapping to the point of muddiness, and at other moments, quite clear.

I catch some words — not nearly enough to form a cohesive thought, yet quite enough for a free-form word association to emerge.

Madre. Mother.
Este mundo. This world.
Cielo. The skies, the heavens.
Viva or vida? To live or the life?
Un techo? A roof?

I have no idea if I’m understanding everything correctly, but it hardly matters. The recurring loop starts to create context for the piece I otherwise know little about.

Mother is a roof from the heavens, I start feeling, as the words reverberate throughout the space.

Mother is a shelter. 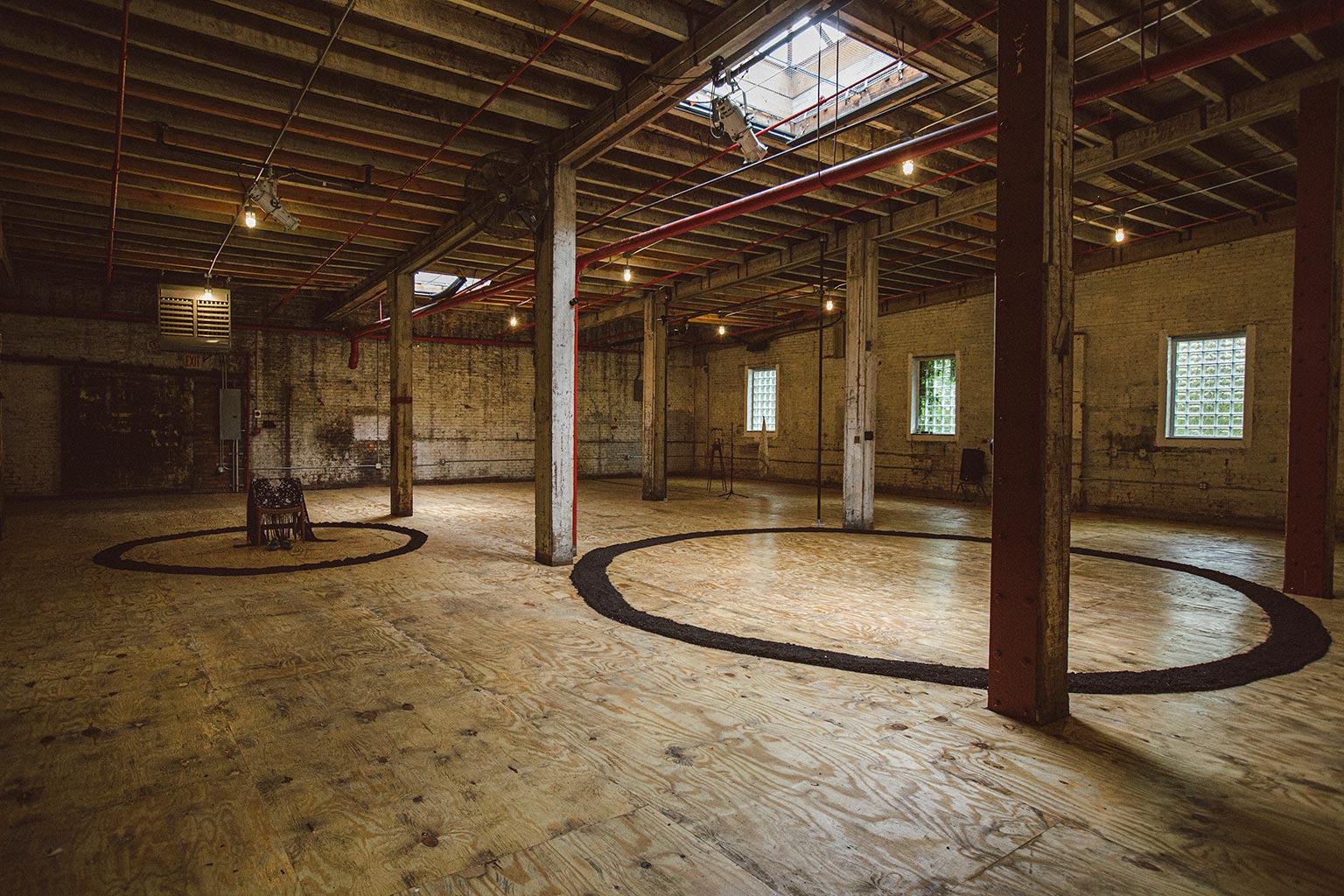 From afar, I see two large black circles drawn on the ground. The larger one fills up nearly a third of the width of the room and sits smack dab in the center. Akinyki moves gracefully within it.

At any other show, I might have felt awkward for arriving late — but this performance is part of Yellow Fish Durational Performance Art Festival, and its long-lasting nature pre-supposes such unpredictability. I am encouraged to move freely about the space. I’ll even become part of the piece if I stay long enough, I am told. So I move to the back of the room and settle in quite close to the circle, symmetrical to Akinyi.

Subtle movements bring her out of the larger circle to cross a 15-foot gap into a smaller circle, which contains a pair of shoes, a chair, and fabric draped on the back of the chair. Yet that crossing is no simple quick movement; it takes place over an extended, non-linear period — and as she moves from nothing into something, the anticipation heightens. Her movements gradually transform from subtlety into a great flow: they remind me of Afro Caribbean dance; they remind me of Capoeira; they remind me of Oschun, the river-goddess of Yoruban mythology. 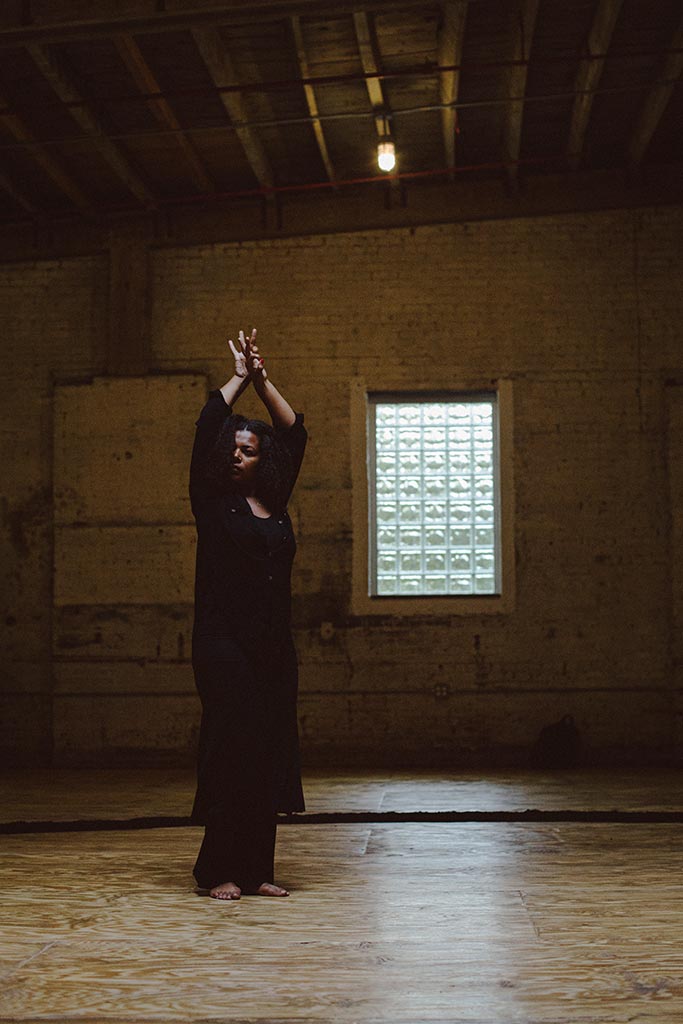 When Akinyi finally enters the smaller circle, her flowy movements become humbled, turning nearly still. She gradually removes the fabric draped on the back of the chair and dons it like a loose hijab, leaving the clogs untouched. I catch glimpses of her bare feet; they are edged in pure black, like the thick borders of the circles, carefully crafted from dirt. The recurring audio loop becomes an echo, playing tricks on my mind, devoid of all logic.

On the far opposite side of the room are two audience members. One has raised hands and dances in tiny alternating steps. The other hums and whoops on occasion, and though it feels unscripted, her voice is too trained and her presence too felt to be complete happenstance. She erupts into a dynamic melody which reminds me of an Islamic call to prayer, and I recall my trip to Turkey, where I first fell in love with those sounds. I’m simultaneously transported to a nondenominational worship service, existing somewhere between Latin America and the Middle East. 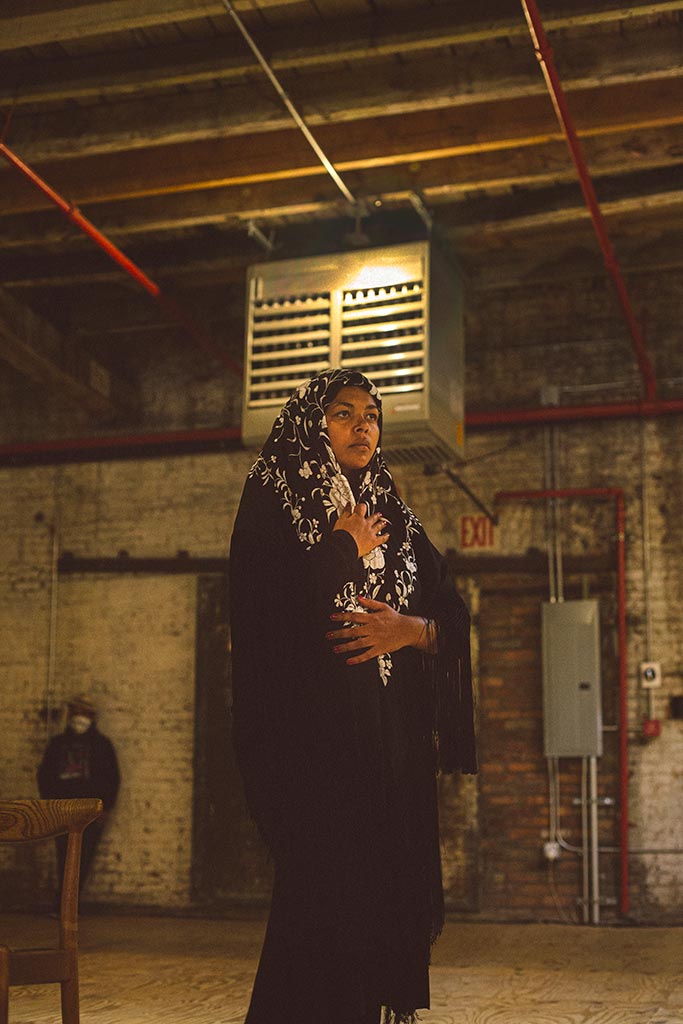 Soon, Akinyi approaches the woman with the raised hands and raises her own. Draped in flowy black, the two become mirrors of one another. I think of a funerary procession as Akinyi removes the scarf and drapes it gently over the head of the other woman.

Immediately and unexpectedly, I am moved.
Tears begin to well in my eyes.

Maybe it’s because I know something about this other woman and the deep grief that she has been feeling about the recent loss of her grandmother. Maybe it’s the otherworldly feeling of being transported to Turkey and the fact that this woman and her grandmother are from Turkey. Somehow, I feel it. Akinyi tenderly takes the other woman in a full embrace, and it is evident: transmutation and healing are taking place. It’s perfect magic.

Not too long after, the performance ends with Akinyi walking over to a sound station and unceremoniously decreasing the volume on the audio recording. She then retreats into a back room, no longer a performer or an otherworldly entity. The multicultural atmosphere evaporates with her.

Having just witnessed what feels like a vague yet powerful something, I am curious to receive confirmation. I walk to the friend upon whom the fabric was draped. Her name is Rana San, and she is one of the curators of this year’s Yellow Fish.

“Did you just have a moment?” I ask, still incredulous, as I give her a hug.

“Yup,” she replies, hugging me back, teary-eyed. “My grandma was all up in here.”

She then explains how her Muslim grandmother never wore a scarf unless they went to a graveyard. On those occurrences, a scarf was also draped over Rana San’s head — but it was never tied.

A few moments after, Akinyi emerges from the back room, and I learn that none of her seven performances at Yellow Fish are planned. She merely feels the energy in the room and moves with the actions that intuitively come to mind. Tonight, when she looked over at the scarf on the chair, she knew what she had to do. Set against a backdrop of what felt like an impromptu call to prayer, Akinyi replicated the same loose draping of the scarf that Rana San’s grandmother once did — and for that instant, the transference of those actions meant everything.

This performance was a part of G.R.I.E.F., a durational exploration of exhaustion of self and of sound, where flamenco transforms into trance and the body bursts with emotions.

This piece showed at Yellow Fish Durational Performance Art Festival VI — happening all of May 2021 in Red Hook, New York.⠀⠀

Learn more about Phyllis Akinyi at phyllisakinyi.com or on Instagram.